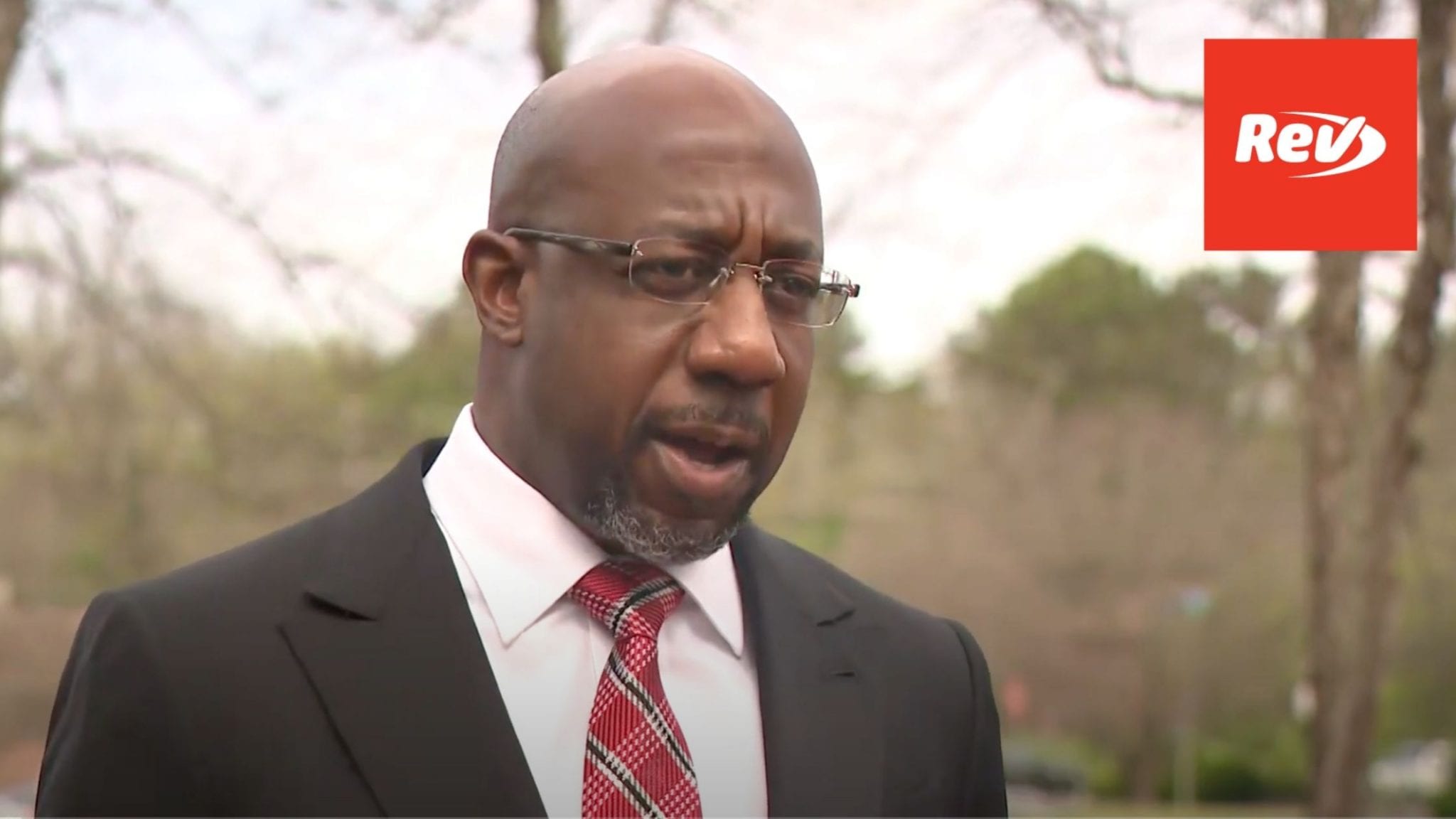 Senator Raphael Warnock held a press conference on March 26, 2021 to address the new voting election law in Georgia. He said: “Our democracy is in a 911 emergency.” Read the transcript of his briefing remarks here.

Senator Warnock: (00:01)
Well, thank you so very much. It is good to be back here in Georgia. I’m so proud of the ways in which the people of Georgia stood up over the last couple of months in the election in November, and in January. And in a real sense, they provided relief to the whole country. We, of course, passed a $1.9 trillion package in response to COVID-19, the American Rescue Plan. And as I visit sites like this, I see clearly the importance of that support.

Senator Warnock: (00:41)
The folks here at the YMCA here in Marietta, are doing an amazing job. I spent some time with an amazing group of volunteers who are, in a real sense, spreading love and hope as they distribute food to families that are dealing with food insecurity. And so all of us are pressing our way through this pandemic. It impacts all of us, but it impacts some communities more than others.

Senator Warnock: (01:17)
And so issues around food insecurity, long-standing disparities in healthcare that are both illuminated and exacerbated by this pandemic. The need to reopen our schools and get our businesses reopened. All of that comes into sharp focus. And we who have the privilege of representing the people, have to make sure that they continue to get the support that they need so that our small businesses can be strengthened, our schools can be reopened, our children and our families can be safe. We can get this pandemic under control, and we can begin to embrace a brighter future for the whole country.

Senator Warnock: (02:10)
And so in that regard, let me finally say that when I think about the work that we’ve been able to do over the last few weeks, with passing the American Rescue Plan. That could not have happened, it would not have happened, if the people of Georgia had not stood up in the ways that they did with historic turnout in the election. And so what the state legislature did yesterday is to try to arrest the voices and the votes of the people.

Senator Warnock: (02:53)
It will not stand. Their ability to be heard in their democracy is a reason why we were able to provide any relief at all. And we’ve got to do everything we can, and I’m going to do everything I can to make sure that their voices are secured through passage of the American. Through passage of the, For The People Act. And also the John Lewis Voting Rights Advancement Act. Thank you so much.

Senator Warnock: (03:27)
Oh, there are major problems with what was passed last night. And as bad as it is, what they were trying to pass was even worse. SB202 will allow for a hostile takeover of local boards of elections. If the Georgia legislature feel the politicians didn’t like the outcome of an election. Its anti-democratic, it’s un-American. They’re trying to make it harder for people to vote, rather than making it easier for people to vote. We saw how important vote by mail is.

Senator Warnock: (04:10)
When you think about working families, they need opportunities to be able to exercise their franchise. And it became particularly important in the middle of this pandemic, which we’re not out of yet. And besides the people of Georgia had been voting like this for years. Now, all of a sudden that’s a problem. I think they don’t like the outcome. And so rather than change their message, they’re trying to change the rules.

Speaker 3: (04:39)
Senator Warnock, can you talk really quickly about Governor Kemp saying that this is the people in Washington trying to restrict the vote, not the Republicans here in Georgia who want to make it easy to vote, hard to cheat. How do you respond to what Governor Kemp had to say to lawmakers in Congress?

Senator Warnock: (04:54)
It is the state legislature here in Georgia right now that’s trying to take over local elections if they don’t like the outcome. I mean, this is an interesting change in tune for the governor. He just said a couple of years ago that everything was under control with our elections here in Georgia. Our own Secretary Of State said that the election that was held, this most recent election, was not rife with fraud as some have tried to suggest. And so what’s the purpose behind all of this?

Senator Warnock: (06:34)
So what’s the purpose of all of this? They don’t like the outcome. And so this is democracy in reverse. Where politicians have decided that instead of the voters picking their representatives, the representatives have a right to cherry pick their voters. It’s un-American. Its anti-democratic. We have to resist it, non-violently of course, with everything within us.

Senator Warnock: (07:03)
And I’m going to do everything I can to pass the For The People Act, which makes voting easier, not harder. And to pass the John Lewis Voting Rights Advancement Act; it’s urgent. Our democracy is in a 911 emergency, and I’m not about to be stopped or stymied by debates about Senate rules. I respect rules, even though there are folks here trying to change the rules.

Senator Warnock: (07:40)
But no Senate rules should overrule the integrity of our democracy. And I was on the phone with my colleagues even last night. I called one of them from the jail while I was getting my church member Representative Park Cannon out of jail to say to that colleague that it’s a contradiction for us to say, we must protect minority rights in the Senate. While right now here in Georgia, they’re trying to crush minority right in the society.

Senator Warnock: (08:26)
I was with her last night when she got out of jail. I’m her pastor. I’ve known her for years. She is an outstanding young woman with a deep passion for public service. And all of us owe her a debt of gratitude in a real sense for just standing up. And I want you to think about this, and I’ll let the investigation play itself out. Maybe there’s something that I haven’t seen. But in the video I saw, she was knocking on the door. Contrast that with folks who staged a violent insurrection on the United States Capitol, police officers and others were killed.

Senator Warnock: (09:17)
And I want to know from those who are using the premise of that assault as the basis for a crave and takeover a power in Georgia, why they’re okay with that. And somehow the actions of a state legislator knocking on the door of a Governor who’s signing a law that impacts her constituents, why her actions are somehow so dangerous and criminal, that she got charged with two felonies.

Senator Warnock: (10:33)
We will see, but folks keep asking what we’re going to do about the filibuster. I think they ought to ask my colleagues on the other side of the aisle, what are they going to do about voting rates? The question really is not where do I stand on the filibuster? That’s a Senate rule. The most fundamental question is where do you stand on voting rights? We wouldn’t have to have this debate about the filibuster, at least on this issue, if the folks on the other side would do the right thing and stand for voting rights, and vote the bill up. They can vote the bill up.

Senator Warnock: (11:15)
Why won’t they stand up for voting rights? They see what’s happening right here in Georgia. They see legislators deciding that it’s a crime to give people water who are standing in lines that they’re making longer. And so I’m a member of the Senate. I respect this traditions. I’m honored to be there to represent the people of Georgia. But the issue of voting rights is about the democracy itself. Its much bigger than any Senate rule.