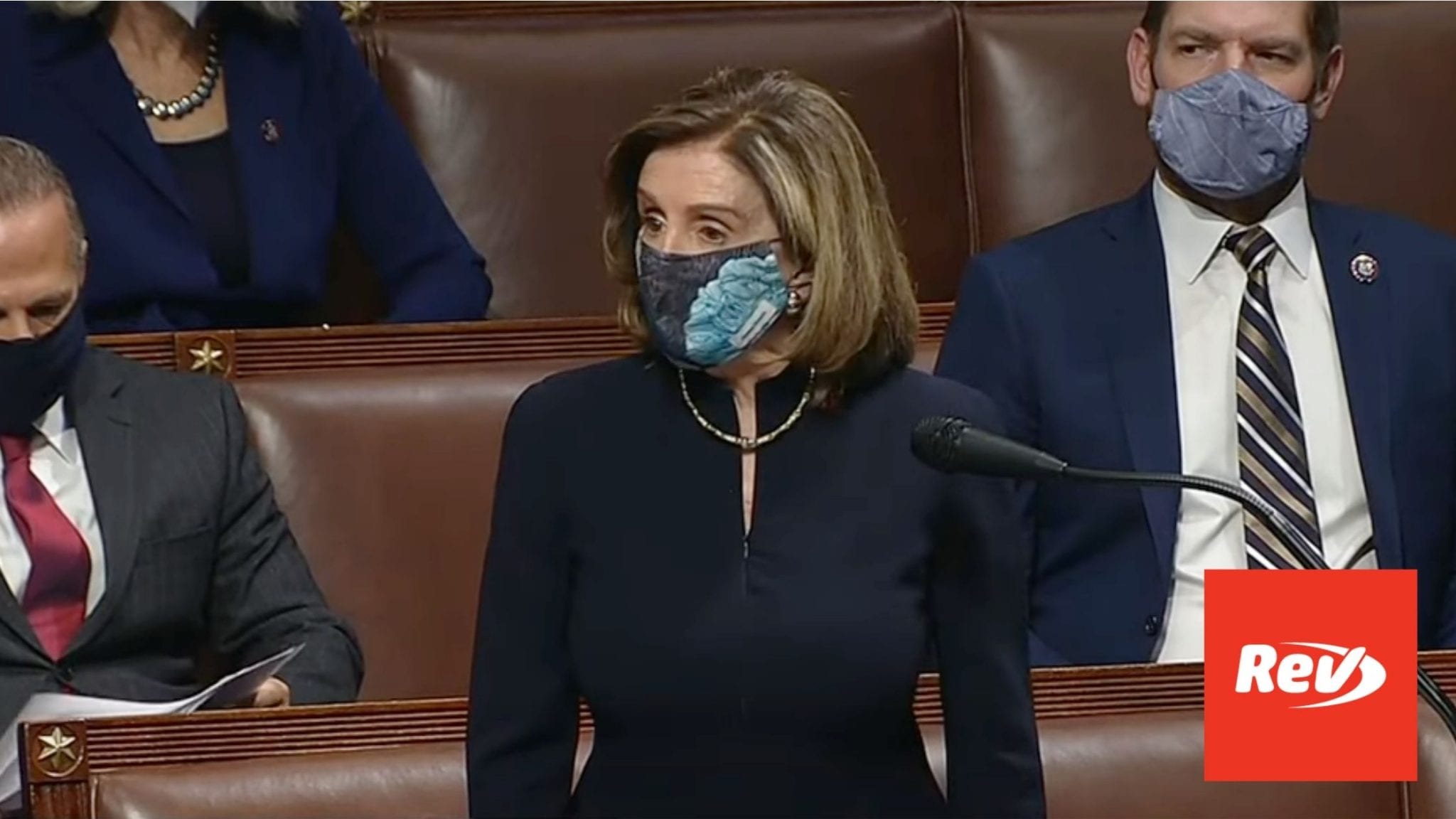 Speaker of the House Nancy Pelosi gave a speech on the House floor as the House of Representatives debated the second impeachment of President Donald Trump on January 13.

Nancy Pelosi: (00:00)
Thank you, Madam speaker. I thank the gentleman for yielding and for his leadership. Madam speaker, in his annual we’ll address to our predecessors in Congress in 1862, President Abraham Lincoln spoke of the duty of the Patriot in an hour of decisive crisis for the American people. “Fellow citizens,” he said, “We cannot escape history. We will be remembered in spite of ourselves. No personal significance or insignificance can spare one or another of us. The fiery trial through which we pass will light us down in honor, or dishonor, to the latest generation. Even we here,” he said, “hold the power and bear the responsibility.” In the Bible, St. Paul wrote, “Think on these things.” We must think on what Lincoln told us. We even here, even us here, hold the power and bear the responsibility. We, you and I, hold and trust the power that arrives most directly from the people of the United States.

Nancy Pelosi: (01:24)
And we bear the responsibility to fill that oath that we all swear before God and before one another. The oath to defend the Constitution against all enemies, foreign and domestic. So help us, God. We know that we face enemies of the Constitution. We know we experienced the insurrection that violated the sanctity of the people’s capital and attempted to overturn the duly recorded will of the American people. And we know that the president of the United States incited this insurrection, this armed rebellion, against our common country. He must go. He is a clear and present danger to the nation that we all love. Since the presidential election in November, an election the president lost, he has repeatedly lied about the outcome, sowed self-serving doubt about democracy, and unconstitutionally sought to influence state officials to repeal reality.

Nancy Pelosi: (02:32)
And then came that day of fire we all experienced. The president must be impeached, and I believe the president must be convicted by the Senate, a constitutional remedy that will ensure that the Republic will be safe from this man who was so resolutely determined to tear down the things that we hold dear, and that hold us together. It gives me no pleasure to say this. It breaks my heart. It should break your heart. It should break all of our hearts, for your presence in this hallowed chamber is testament to your love for our country, for America, and to your faith in the work of our founders to create a more perfect union.

Nancy Pelosi: (03:17)
Those insurrectionists were not patriots. They were not part of a political base to be catered to and managed. They were domestic terrorists, and justice must prevail. But they did not appear out of a vacuum. They were sent here by the president with words such as a cry to, “Fight like hell.” Words matter. Truth matters. Accountability matters. In his public exhortations to him, the president saw the insurrectionists, not as the foes of freedom, as they are, but as the means to a terrible goal, the goal of his personally clinging to power, the goal of thwarting the will of the people, the goal of the ending in a fiery and bloody clash nearly two and a half centuries of our democracy. This is not theoretical. And this is not motivated by partisanship. I stand before you today as an officer of the constitution, a speaker of the House of Representatives.

Nancy Pelosi: (04:26)
I stand before you as a wife, a mother, a grandmother, a daughter, a daughter whose father proudly served in this Congress, Thomas D’Alesandro Jr. from Maryland, one of the first Italian Americans to serve in the Congress. And I stand here before you today as a noblest of things, a citizen of the United States of America, with my voice and my vote, with a plea to all of you. Democrats and Republicans, I ask you to search your souls and answer these questions. Is the president’s war on democracy in keeping with the Constitution? Were his words and insurrectionary mob a high crime and misdemeanor? Do we not have the duty to our oath to do all we constitutionally can do to protect our nation and our democracy from the appetites and ambitions of a man who has self-evidently demonstrated that he is a vital threat to liberty, to self-government, and to the rule of law?

Nancy Pelosi: (05:37)
Our country is divided. We all know that. There are lies abroad in the land spread by a desperate president who feels his power slipping away. We know that too. But I know this as well, that we here in this House have a sacred obligation to stand for truth, to stand up for the Constitution, to stand as guardians of the Republic. In a speech he was prepared to give in Dallas on Friday, November 22nd, 1963, President John F. Kennedy was to say, “We in this country, in this generation, are by destiny rather than choice, the watchmen on the walls of world freedom. We ask, therefore, that we may be worthy of our power and responsibility.” That we may be worthy.

Nancy Pelosi: (06:38)
President Kennedy was assassinated before he could deliver those words to the nation, but they resonate more even now, in our time, in this place. Let us be worthy of our power and responsibility, that what Lincoln thought was the world’s last best hope, the United States of America, may long survive. My fellow members, my fellow Americans, we cannot escape history. Let us embrace our duty, fulfill our oath, and honor the trust of our nation. And we pray that God will continue to bless America.

Lestor Holt: (07:16)
Hey, NBC news viewers. Thanks for checking out our YouTube channel. Subscribe by clicking on that button down here, and click on any of the videos over here to watch the latest interviews, show highlights, and digital exclusives. Thanks for watching.