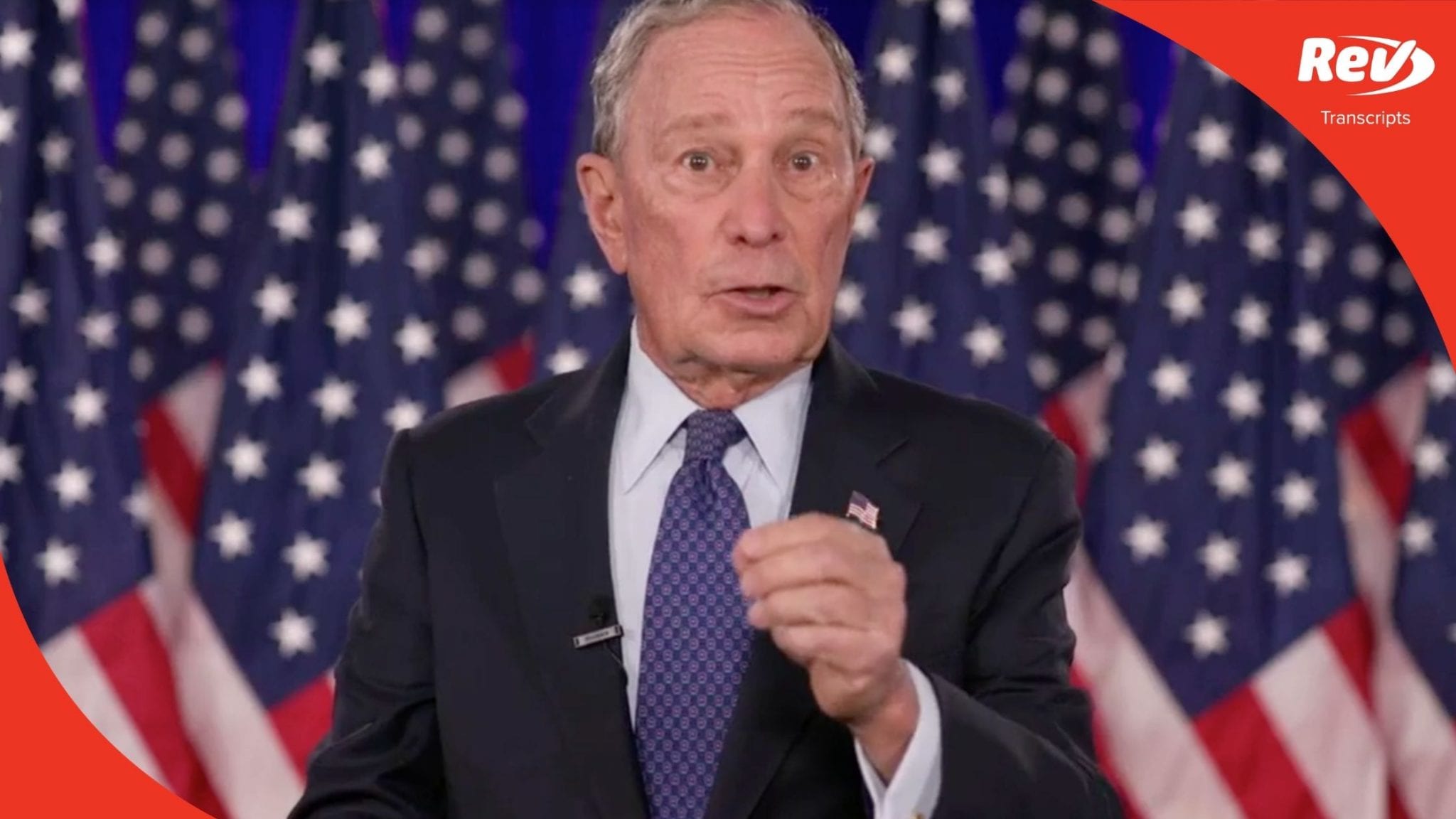 Michael Bloomberg: (00:09)
[inaudible 00:00:09] all about people. And the two people running for president couldn’t be more different. One believes in facts. One does not. One listens to experts. The other thinks he knows everything. One looks forward and sees strength in America’s diversity. The other looks backwards and sees immigrants as enemies and white supremacists as allies.

Michael Bloomberg: (00:34)
Here’s another difference. One has proven he knows how to handle a crisis by helping to lead the economic turnaround after the 2008 recession, while the other has not only failed to lead, he has made the current crisis much worse.

Michael Bloomberg: (00:49)
When confronted with the biggest calamity any president has faced in the modern era, Donald Trump spent the year downplaying the threat, ignoring science and recommending quack cures, which let COVID-19 spread much faster than it should have, leaving hundreds of thousands needlessly sick or dead. He has failed the American people catastrophically.

Michael Bloomberg: (01:30)
Today, unemployment is at historic highs and small businesses are struggling just to survive. It didn’t have to be this way.

Michael Bloomberg: (01:40)
Before I ran for mayor, I spent 20 years running a business I started from scratch. So I want to ask small business owners and their employees one question, and it’s a question for everyone. Would you rehire or work for someone who ran your business into the ground? And who always does what’s best for him or her, even when it hurts the company? And whose reckless decisions put you in danger and he spends more time tweeting than working?

Michael Bloomberg: (02:11)
If the answer is no, why the hell would we ever rehire Donald Trump for another four years?

Michael Bloomberg: (02:19)
Trump says we should vote for him because he’s a great businessman. Really? He drove his companies into bankruptcy, six times, always leaving behind customers and contractors who were cheated and swindled and stopped doing business with him. Well, this time, all of us are paying the price and we can’t let him get away with it again.

Michael Bloomberg: (02:41)
Donald says we should vote for him because the economy was great before the virus. Huh? Biden and Obama created more jobs over the last three years than the Trump administration did over their first three. And economic growth was higher under Biden and Obama than under Trump.

Michael Bloomberg: (03:16)
Look, our goal shouldn’t be to bring back the pandemic economy. It should be, as Joe says, to build it back better. Joe’s economic plan will create clean energy jobs that help fight another crisis that Trump is ignoring, climate change. And Joe will rebuild our crumbling roads and bridges, something Trump has incessantly talked about doing, but in the last three and a half years, he hasn’t done anything. What a joke?

Michael Bloomberg: (03:44)
And let me tell you a little secret. Donald Trump’s economic plan was to give a huge tax cut to guys like me, who didn’t need it, and then lie about it to everyone else. Well, Joe, we’ll roll back that tax cut that I got so we can fund things our whole country needs like training for adults who have lost jobs, and making college more affordable, and investing in American research and development so that the products of tomorrow are made today by American workers.

Michael Bloomberg: (04:17)
Growing up, I was taught to believe that America is the greatest country in the world. Not because we won the Second World War, but because of why we fought it; for freedom, democracy and equality.

Michael Bloomberg: (04:30)
My favorite childhood book was called Johnny Tremain, about a Boston boy who joins the Sons of Liberty at the dawn of the American Revolution. At the end of the book, Johnny stands on Lexington commons and sees a nation that is “green with spring dreaming of the future”. That’s the America I know and love. And that’s the America we are in danger of losing under this president. So let’s put an end to this whole sorry chapter in American history and elect leaders who will bring integrity and stability, sanity and competence back to the White House.