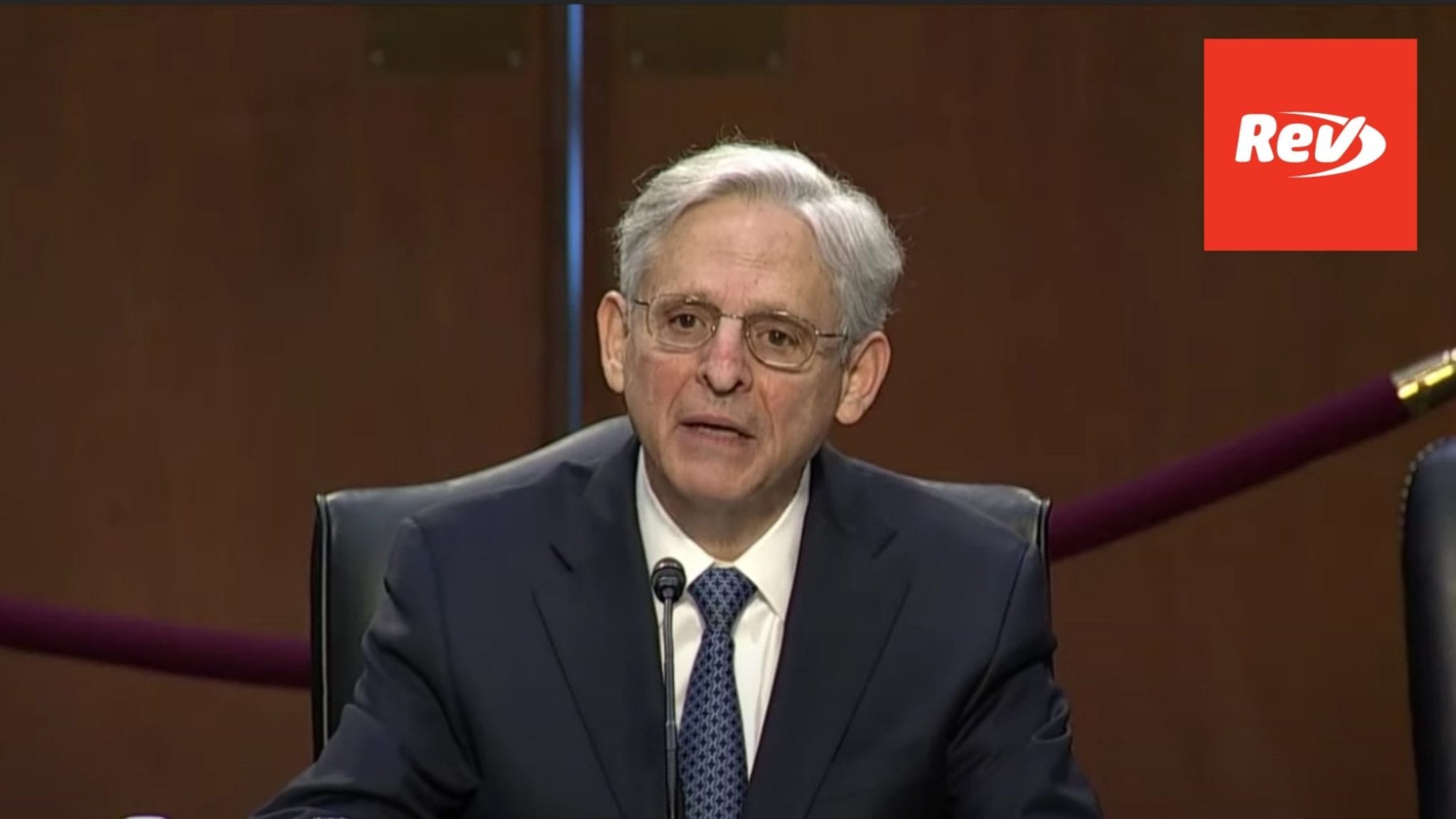 Merrick Garland: (00:00)
Thank you Mr. Chairman, Mr. Ranking Member, members of the Judiciary Committee. I am honored to appear before you today as the President’s nominee to be the Attorney General.

Merrick Garland: (00:11)
I would like first to take this opportunity to introduce you to my wife, Lynn, my daughters, Jessie and Becky, and my son-in-law, Xan. I am grateful to them and to my entire extended family, that is watching today on C-SPAN, every day of my life.

Merrick Garland: (00:51)
It is a fitting time to reaffirm that the role of the Attorney General is to serve the rule of law and to ensure equal justice under law. And it is a fitting time to recognize the more than 115,000 career employees of the department and its law enforcement agencies and their commitment to serve the cause of justice and protect the safety of our communities.

Merrick Garland: (01:18)
If I am confirmed as Attorney General, it will be the culmination of a career I have dedicated to ensuring that the laws of our country are fairly and faithfully enforced and the rights of all Americans are protected.

Merrick Garland: (01:34)
Before I became a judge almost 24 years ago, a significant portion of my professional life was spent at the Justice Department. As a special assistant to Ben Civiletti, the last of the trio of post-Watergate Attorneys General, as a Line Assistant US Attorney, as a supervisor in the Criminal Division, and finally, as a senior official in the Department. Many of the policies that the Justice Department developed during those years are the foundation for reaffirming the norms that will ensure that the Department adheres to the rule of law.

Merrick Garland: (02:12)
These are policies that protect the independence of the department from partisan influence in law enforcement. That strictly regulate communications with the White House. That established guidelines for FBI domestic operations and foreign intelligence collection. That ensure respectful treatment of the press. That read the Freedom of Information Act generously. That respect the professionalism of DOJ employees, and that set out the principles of federal prosecution to guide the exercise of prosecutorial discretion.

Merrick Garland: (02:49)
In conversations that I have had with many of you before this hearing, you have asked why I would agree to leave a lifetime appointment as a judge. I’ve told you that I love being a judge, but I have also told you that this is an important moment for me to step forward because of my deep respect for the Department of Justice and for its critical role of ensuring the rule of law.

Merrick Garland: (03:16)
Celebrating DOJ’s 150th year reminds us of the origins of the Department, which was founded during Reconstruction in the aftermath of the Civil War to secure the civil rights that were promised in the 13th, 14th and 15th Amendments.

Merrick Garland: (03:33)
The first Attorney General appointed by President Grant to head the new Department led it in a concerted battle to protect black voting rights from the violence of white extremists, successfully prosecuting hundreds of cases against white supremacist members of the Klu Klux Klan.

Merrick Garland: (04:22)
Communities of color and other minorities still face discrimination in housing, in education, in employment and in the criminal justice system, and they bear the brunt of the harm caused by pandemic, pollution, and climate change. 150 years after the Department’s founding, battling extremist attacks on our democratic institutions also remains central to the Department’s mission.

Merrick Garland: (04:54)
From 1995 to 1997, I supervised the prosecution of the perpetrators of the bombing of the Oklahoma City Federal Building, who sought to spark a revolution that would topple the Federal Government. If confirmed, I will supervise the prosecution of white supremacists and others who stormed the Capitol on January 6th, a heinous attack that sought to disrupt a cornerstone of our democracy, the peaceful transfer of power to a newly elected government.

Merrick Garland: (05:30)
And that critical work is but a part of the broad scope of the Department’s responsibilities. Justice Department protects Americans from environmental degradation and the abuse of market power, from fraud and corruption, from violent crime and cyber crime, and from drug trafficking and child exploitation. And it must do all of this without ever taking its eye off of the risk of another devastating attack by foreign terrorists.

Merrick Garland: (06:04)
The Attorney General takes an oath to support and defend the Constitution of the United States against all enemies, foreign and domestic. I am mindful of the tremendous responsibility that comes with this role.

Merrick Garland: (06:20)
As Attorney General, later Supreme Court Justice Robert Jackson famously said, quote, “The prosecutor has more control over life, liberty, and reputation than any other person in America. While prosecutors at their best are one of the most beneficent forces in our society, when they act from malice or other base motives, they are one of the worst.”

Merrick Garland: (06:50)
Jackson then went on to say, “The citizen’s safety lies in the prosecutor who tempers zeal with human kindness, who seeks truth and not victims, who serves the law and not factional purposes, and who approaches the task with humility.”

Merrick Garland: (07:11)
That was the prosecutor I tried to be during my prior service in the Department of Justice. That is the spirit I tried to bring to my tenure as a Federal Judge, and if confirmed, I promise to do my best to live up to that ideal as Attorney General. Thank you.