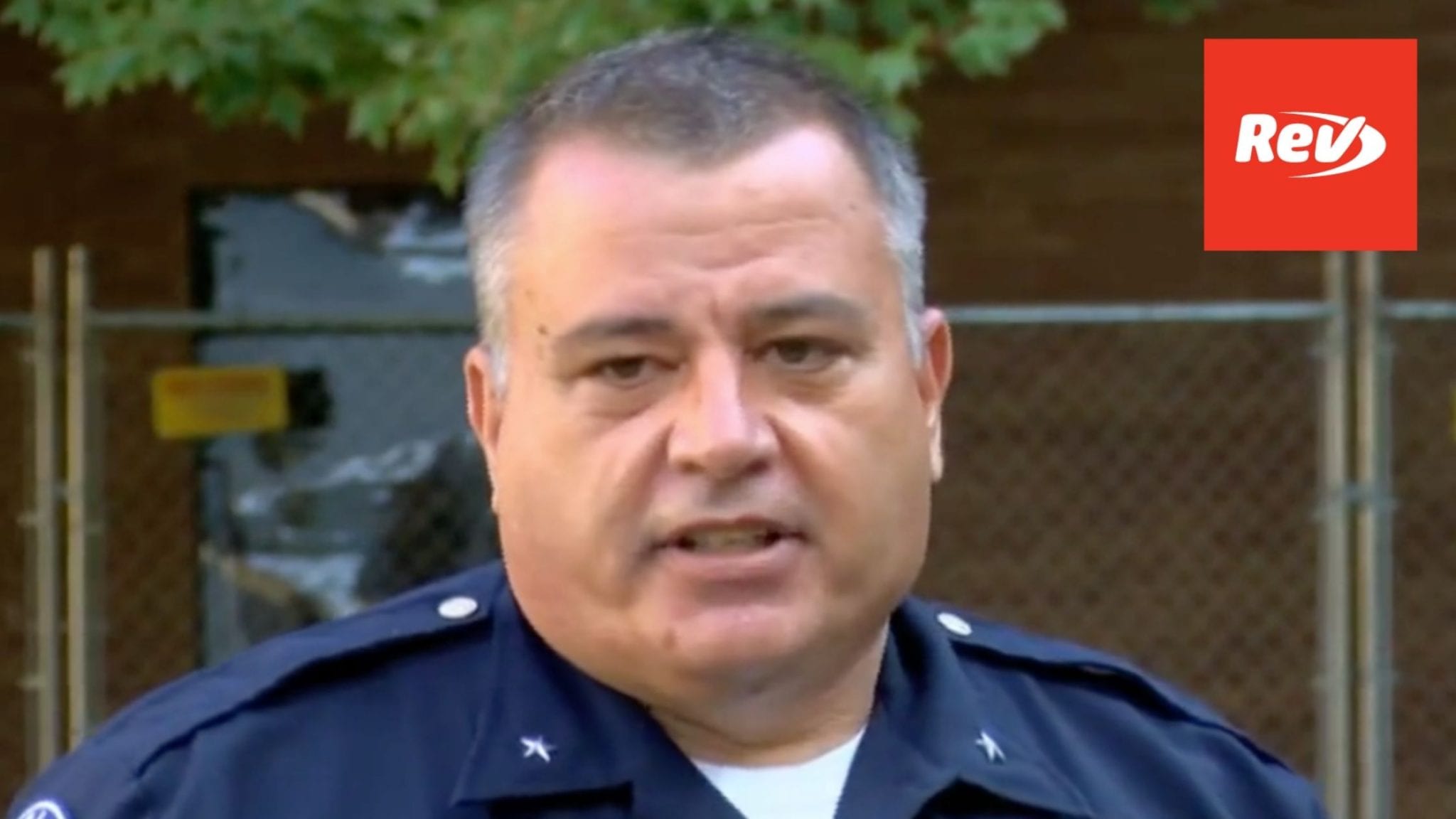 The Louisville police chief held a press conference on September 22 to discuss precautions the police department is taking in preparation for the Breonna Taylor case decision. Read the transcript of the briefing with updates for Louisville here.

LMPD Chief: (00:05)
The following steps were put in place both to protect the public and to facilitate First Amendment activities. Barricades were placed around Jefferson Square Park and the perimeter of the downtown area, to ensure pedestrian safety. Vehicle access was restricted in the blocks immediately surrounding Jefferson Square Park, allowing only pedestrian access. Vehicle traffic was further restricted in the downtown area between Market Street to Broadway, and from Second Street to Roy Wilkins, Police will, at these locations, work with people to get where they need to go, who work, live and are visiting the downtown area.

LMPD Chief: (00:48)
Surface parking on the streets from Market Street to Broadway, and Second to Roy Wilkins is also limited. We request that any persons who have a vehicle parked in these areas take steps to immediately remove that vehicle. There will also later on, be limited access to the parking garages in the area, again, to help ensure public safety. This is no means intended to be a lockdown of the downtown area. The public can still enter and exit the downtown area in the following ways. They can get into the downtown area by going to Second and Jefferson, Roy Wilkins and Chestnut, Eighth and Market, and Seventh and Broadway. They can also exit the downtown area by going to Roy Wilkins and Jefferson, Second and Chestnut, Third and Market, and Fourth and Broadway.

LMPD Chief: (01:38)
We have also received some inquiries about a State of Emergency, I declared yesterday for the Louisville Metro Police Department. That State of Emergency is specific to the Louisville Metro Police Department, and allows us to take the steps we need to take to ensure we have adequate staffing for whatever the situation we encounter may be. This is separate from a separate State of Emergency declared by Mayor Fisher that allowed some of the activities you’re seeing to take place. Again, I understand that this has caused inconvenience for many of the public, and we just ask that people bear with us as we go through these unprecedented times, the many unknowns, both unknowns to the police and to the public on what will transpire. Thank you.

Speaker 2: (02:20)
Chief, I know you said that LMPD has really no inkling of when an announcement or what announcements will be made, but to essentially put, to block off the thoroughfares downtown, you’ve got to have some sort of inclination or did you just [inaudible 00:02:34] off the Federal Court House shutting down? What caused it today?

LMPD Chief: (02:39)
There’s a lot of indicators you see. I mean, there’s been rumors swirling around for quite a while that something’s going to happen. Just like the public, we are anticipating something happened and we felt these steps were necessary to help protect the public.

Speaker 3: (02:50)
I have a question about protestors. Have you been in touch with them, with any of the organizers? How much of what you guys are planning to do have they had input in?

LMPD Chief: (03:02)
We’ve had meetings with various protesters. We have a group, specifically engaging with the protesters, both on the LMPD side and from the Mayor’s office, engaging and discussing our plans, trying to work to some common understandings, as we go through this. That’s been ongoing in the hundred plus days of protest activity you’ve seen.

LMPD Chief: (03:24)
I can’t really go into specifics right now. I’m not prepared to talk about it.

LMPD Chief: (03:34)
They can get in through the restricted areas, like what I came in this morning, people were able to freely go through one of the points that officers were not checking IDs. Now, obviously, if we run into a situation where things change, where things become more dangerous to the public, we may need to look at different measures. But, as of right now, people can get in and go.

Speaker 5: (03:53)
There were a number of reported businesses already, in downtown [inaudible 00:04:00] Now we’re seeing even more, especially in the area where there’s the restaurants and the open space. It’s not, you’re saying that the city is not on lockdown, but it feels like it is.

LMPD Chief: (04:12)
I can understand the some members of public, how people would feel that way, but that is certainly not our intention. Our intention is merely to ensure public safety, to help protect people, help protect businesses and help prevent property damage.

Male Reporter: (04:24)
What are the areas of where, for people to want to protest, to come here during the day, a peaceful protest? Is there a dedicated area> What is your message to those people?

LMPD Chief: (04:36)
We have not designated any areas, but what we’ve commonly seen throughout the protest, is people are naturally tending to congregate in that area around Jefferson Square and the Sixth and Jefferson area. People can still freely access that, while we have restricted vehicular access for public safety. If you’ve seen some of the vehicular attacks that have happened in this country and across the world, that is exactly what we’re thinking about. People can still access that on foot. They can drive down, park where they need to park and walk on in and express their First Amendment concerns freely and peacefully.

Female Reporter: (05:10)
You have said there are some barricades or main fencing around Jackson Square Par. Is the park itself completely closed off or are people able to access, physically. The park?

LMPD Chief: (05:21)
Well, there is no fencing around the park. There are some vehicles and some barricades preventing vehicles from coming in. People on foot can come and go as they need to.

Male Reporter: (05:30)
What about some of the efforts of the Federal partners in what you guys are doing in anticipation of perhaps, protests?

Male Reporter: (05:42)
We’ve heard that in a lot of these situations you have Martial Command you have [inaudible 00:05:50] Are you working with these, in essence, gathering some intelligence in what could happen?

LMPD Chief: (05:58)
Like, in most situations, in keeping this community safe, we are in partnership with our federal partners. I really can’t get into it much more than that.

Female Reporter: (06:03)
Right over there, some pedestrians were trying to walk through and they were told they just need to reroute even foot traffic. Is there anywhere in particular downtown that people do need to be aware if they are walking around there? Is there area that’s restricted to foot traffic right now?

LMPD Chief: (06:21)
I’m not aware of any areas restricted to foot traffic, other than obviously the space behind me, where we just need some space to operate. There’s no restrictions on foot traffic.

Male Reporter: (06:30)
Chief, tell us about, as demonstrations start to establish, if there’s any violence, specifically about tear gas?

LMPD Chief: (06:39)
There were two questions going on. I couldn’t hear your questions.

Male Reporter: (06:44)
Have you guys had any [inaudible 00:06:47] where you talked about what the lines would be we and where would that would be from, when you guys use this?

LMPD Chief: (06:52)
Yes. We changed our policy back on September 11th, and before that, by executive order, by me, where tear gas has to be, by my authorization or the authorization or someone I designate. In this case, I’ve designated the Deputy Chief as my S.econd on that decision things we would be looking at would be violent activity, serious property damage, things like that. There is one exception that we have given our officers if immediate violence, serious violence, such as gunfire, erupts, that is a situation we have allowed them to make the decision because there simply is not time to protect the public and call for permission. Yes, Ma’am?

LMPD Chief: (07:52)
We’ve learned every night that we’ve gone through this. On the good nights, on the bad nights, we have learned everything … Every day have dealt with this and we try to modify our plans continuously, and what you’re seeing now is a sign of that. The first time was sudden. It was very spontaneous. In the community, we’ve all heard the rumors. We all know something is coming. We don’t know what it is. It’s unknown to all of us. Quite frankly, I hope, we hope that all of this is simply not needed, that it will be a peaceful situation, and we’ll all be talking in a week going, “Wow, that was something we didn’t need to do” but on the front side of it where we don’t know what’s going to happen, we have to plan the best we can to protect the public.

LMPD Chief: (08:45)
Yeah. As with everything you’ve seen, as we’ve gone through this rumors come out/ We’ve certainly been in contact with the Attorney General’s office and we hope to have some advanced notice. But as we all know, in the reality of dealing with day-to-day situations, sometimes your plans go awry. We have to plan ahead of time, but we certainly hope we do get that notice. The Attorney General’s office has certainly assured us, they will try it to the best of their ability, to give us notice. But whether the situation allows us to have that notice, we simply don’t know.

Female Reporter: (09:13)
Sir, can you comment at all about the email you received from Mattingly?

LMPD Chief: (09:22)
I think it’s a little premature to talk about that. It’s something developing, so we’ll have something out later.

Speaker 8: (09:28)
For the local, we’re done. For the local media that did not get the notice on this, that was my error. The millions of out-of-town folks got the notice and I neglected to include the local folks. So, from here on forward, that won’t happen and we’ll try to do as many of these as we can in person as, rather than the virtual one. This is a little more personal.

Female Reporter: (09:49)
Sir, is it possible to hear his comments sometimes the mic thing, what he said? I mean, this is gentlemen who was part of Breanna Taylor’s-

Female Reporter: (10:03)
My question to you is your response to Mattingly sending you an email at two o’clock this morning, calling protestors thugs and whatnot.

LMPD Chief: (10:09)
All right. That’s a situation that is currently developing. It’s simply too premature at this time to talk about it.