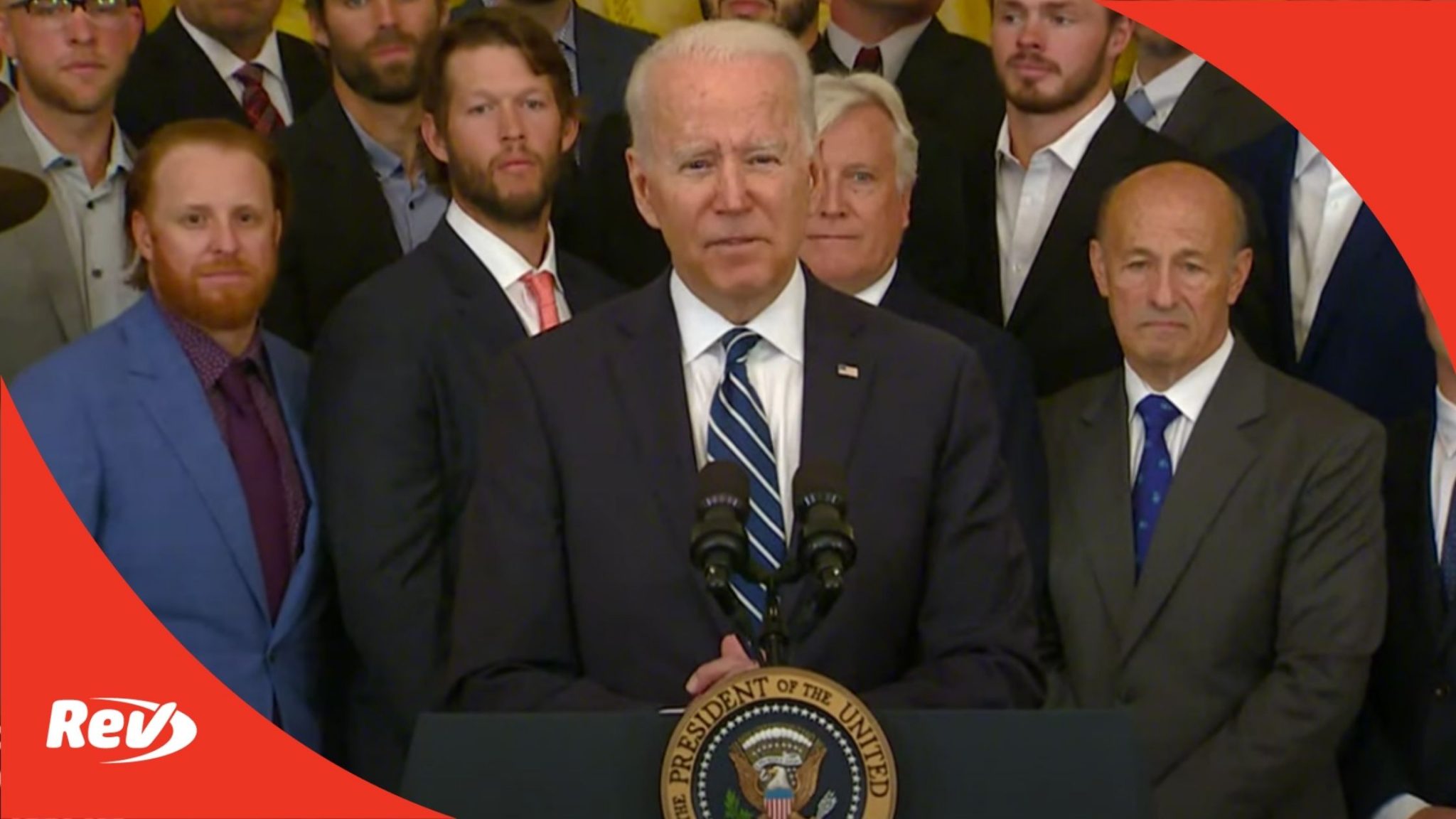 President Joe Biden welcomed the LA Dodgers, the 2020 World Series champions to the White House on July 2, 2021. Read the transcript of his speech remarks here.

Speaker 1: (02:10)
Ladies and gentlemen, the President of the United States.

President Biden: (02:31)
Well, good afternoon everyone. It’s a great beginning of the 4th of July weekend, Madam Vice President. Mr. Leader. How are you? Good to see you.

President Biden: (02:46)
We’re here today to congratulate a group of folks who did pretty well. Welcome to the White House. I have a feeling, Kamala, I think we may be doing again by the end of the year. I don’t know, man. I’m not sure I’ll be able to handle Garcetti if you win twice. I mean, this is going to be hard, really hard. But 2020 World Series champions, the Los Angeles Dodgers.

President Biden: (03:20)
We’re honored and thrilled they’re here. And that goes for the Vice President too. She’s from California, you probably heard. I’m not going to mention which end of the state she’s from right now and who she roots for. But is Doug here? I know he was. I thought he may-

President Biden: (03:41)
I tell you what, well we have … When you talk about mixed families, I got a mixed family and she’s got a mixed family, based on baseball and sports. I’m not going to mention that team in Northern California, in the San Francisco area. And I’m not going to mention that team in Philadelphia. My wife is a Philly girl from her belt buckle to her shoe soles. And if I root for anybody but the Phillies, I’ll be sleeping in the Lincoln bedroom alone. But sometimes … Well, no, never. But anyway, but the Dodgers are a lot more than a baseball club. They really are. They’re a pillar of American culture and American progress. And that’s for real.

President Biden: (04:37)
The team that brought us the voice of Vin Scully and the arm of Sandy Koufax and Fernando Valenzuela. And I was talking with staff and they said, “I want to teach you how to pronounce that name.” I said, “I watched him pitch. But I’m only 37.” But I wish … anyway, above all else, the heart of Jackie Robinson.

President Biden: (05:45)
This is a World Championship organization, because they’ve got a team full of guys who stepped up when they were called upon, just stepped up. And it takes a team to finish with the best record in baseball, to knock out the Brewers, the Padres, the Braves, the Rays, and win it all. And the Dodgers just didn’t win. You finished with the highest winning percentage of any teams since 1954.

President Biden: (06:14)
Think about that. The winning-est ball club since 1954. It takes a team to persevere through one of the most challenging seasons, one of the most challenging years in our nation’s history. In the pandemic when it struck, it up ended just about everything, every part of American life. Families were grieving for loved ones lost, the economy collapsed, and the pain and fear in the nation were immeasurable.

President Biden: (06:42)
When the season began, it was easy to feel like it was … They had bigger things to worry about than just sports. And of course we did and we still do. But I think what we discovered is that we need sports more than we ever realized. We see it now, as fans return to ballparks and arenas all across the country, cheering on their favorite players and teams, sharing that sense of community and pride. It’s a uniting feature, as I said, you guys in the other room.

President Biden: (07:37)
So today, we celebrate your incredible achievement. We celebrate the great work you do on and off the field, in the community and on childhood literacy, preventing bullying, and so much more. For the way this team is built, and from the way it’s built, I suspect we have, many of you, as I said, may be back visiting soon. Above all, as we beat this pandemic and celebrate fans coming back to stadiums, we celebrate something else, a national achievement. We came together as fellow Americans, frontline workers, friends, families, neighbors, looking out for one another.

President Biden: (08:18)
And Dodgers Stadium was the heart of that effort. I want to thank you ownership for that, the heart of the effort, administering more than 1 million. COVID tested the stadium and getting nearly a half million vaccine doses in people’s arms. Dodgers also helped us come together by being the first team in baseball to make their stadium available to voting, as distance outdoor vote centers during the last election. So not only does the Dodger Stadium host world champions, it helps save lives and strengthen our democracy as well. Together as a nation, we’ve proved that it truly never a good bet to bet against America. America’s back, and the Dodgers are back. So congratulations to all of you and the best of luck the rest of the season. May God bless you all. And may God protect our troops. Thank you.

Speaker 5: (09:30)
Hi everybody. First time to speak at the White House, so sorry if I’m a little nervous. But Mr. President, thank you for having us. It’s an honor to be here and get to celebrate our World Series victory here at the White House. Last season was a special one for us, but it was also a challenging one for our country. And our hope was that we were able to provide just a little bit of joy and comfort and relief to our fans that were going through some tough times.

Speaker 5: (10:00)
This season it’s been incredible to have fans back in the ballpark. We miss their energy and their passion for the game. And it means so much to us that people are coming back to the ballpark and things around the country are going back to normal. Hopefully, like you said, we can come visit again next year. So with that, we brought something for you and the Vice President. And now our team owner, Mark Walter, is going to bring that down for you.

President Biden: (10:33)
I want to show you I’m a man of courage. Well thank you very much. What a great honor. Thank you.

Speaker 5: (10:57)
I think Doc’s going to come up now and present to Madam Vice President.

President Biden: (11:45)
All right. But you’re going to take this down I know in a minute, but hang on a second. Folks, I think even the Americans who aren’t baseball fans, they there’s an awful lot of baseball metaphors and an awful lot that we … it creeps into every part of our language and our culture. And it has been one of the great equalizers. Come on up here, Madam Vice President. What the Vice President I spend a lot of time working on making sure we do is deal with the equity in United States, making sure that we change the dynamic in a fundamental way, that we’re the only nation in the world organized based on an idea. Every that every other nation is based on the notion of culture or geography or religion. We’re the only one based on an idea. Not a joke.

President Biden: (12:48)
And the idea is we hold these truths to be self-evident that all men and women are created equal and endowed by their creator. That’s who we are. And we decided this is the time to push that forward. Look what baseball has done. Look what baseball has done. Look at the makeup of this ball team, the makeup of the ball clubs all across the league. I really mean, it’s gigantic. Look at who’s managing this clubs. I mean, so it matters, and you send a message that is profound.

President Biden: (13:26)
Now I’m going to mention one ballplayer that the Vice President’s heard me mentioned before that even I’m not old enough to have watched him play. But Satchel Paige. And Satchel Paige, as any pitcher out here can tell, you the older you get, the harder to keep that arm going. Well, he didn’t get to the majors until he was 45 years old. On his 47th birthday, I know you all know this, he pitched a win against Chicago. And all the press went into his room and in the locker room, he said, “Satch, Satch, it’s amazing. 47 years old and you pitched a win. How do you feel about being 47, Satch?”

President Biden: (14:10)
He said, “Boys, that’s not how I look at age.” I had the staff look this up. This is what he did say. “It’s not how I look at age.” “How do you look at it, Satch?” “Yeah, I look at it this way.” He said, “How old would you be if you didn’t know how old you were?” I am 51 years old, you guys are 19. Anyway, I think you’re real … I know you don’t underestimate it anymore. You saw what happened in other professional leagues and the way you and all the leagues responded to the crisis we face. So thank you. Thank you. Thank you. Thank you. And I just want you to know that we have a congressional baseball game every year. In the very beginning, I used to be a center fielder and my Walter Mitty dream … Anyway, it’s a long story, but …

President Biden: (15:02)
And my kids only remember two things that ever happened to me in my career, my boys. And they’ve met kings and queens and they’ve gone to other countries. But I played in the second Congressional baseball game at the old stadium, in the old Washington stadium. And I hit one off the right center field wall, bounced off the wall. I think it’s 368, or I don’t know what it is exactly now, but off the wall. And I’m rounding … anyway, to make a long story short, my kids remember that, all the rest. And guess what? Only thing I remember too. Yeah. I thought, “What could have been. What could have been.”

President Biden: (15:43)
At any rate, and I’m with Cedric Richmond, who is a Congressman, a hell of an athlete, pitched in college. And we’re both hoping that somehow he would do it based on merit. I’m hoping that because I got elected President, I may do it on influence, to be inducted into the Congressional Baseball Hall of Fame. You all think I’m kidding, don’t you? No.