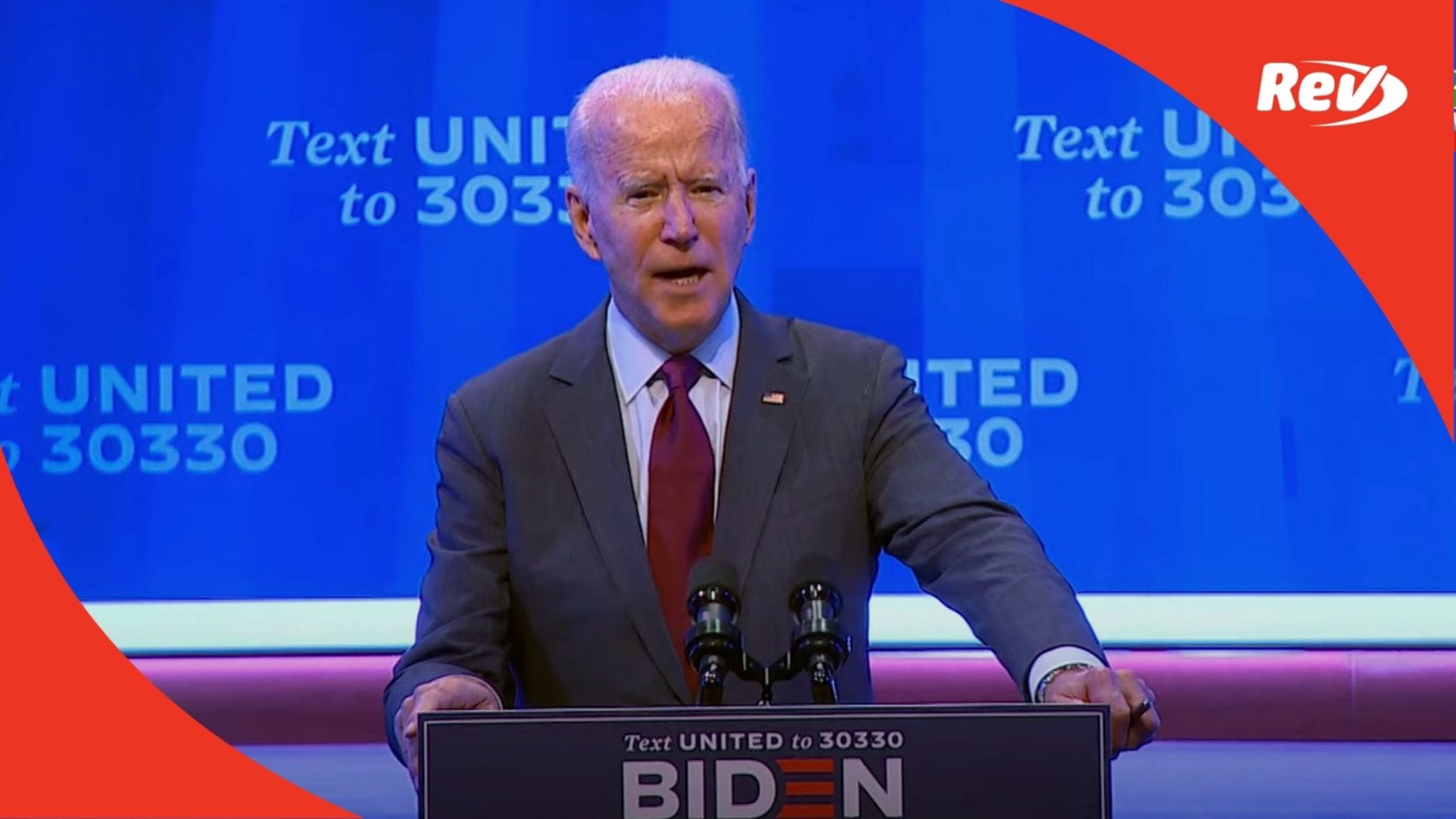 Joe Biden: (00:00)
I had the honor of paying respects to Justice Ginsburg and her family. First woman, first woman in history of our nation to lie in state in the US Capitol. And though it should not have taken nearly this long to bestow that honor on a woman, it nevertheless speaks to the unique and powerful impact Justice Ginsburg has made in our society and her enduring legacy of equal rights and equal justice under the law.

Joe Biden: (00:36)
Shortly before Justice Ginsburg passed, she told her granddaughter, and I quote, “My most fervent wish is that I will not be replaced until a new president is installed.” End of quote. It wasn’t a personal request. It wasn’t a favor being asked for. It was the last act of a long, unflinching career of standing up for American democracy. Never before in our nation’s history has a Supreme Court justice been nominated and installed while a presidential election is already underway. It defies every precedent, every expectation of a nation where the people, the people, are sovereign and the rule of law reigns.

Joe Biden: (01:29)
But yesterday, before justice Ginsburg could be laid to rest and after a hundred thousands of Americans had already cast their ballots, the president nominated a successor to her seat. It’s no mystery about what’s happening here. President Trump is trying to throw out the Affordable Care Act. He’s been trying to do it for the last four years. The Republican party has been trying to eliminate it for a decade. Twice, already, the Supreme Court has upheld that law, the Affordable Care Act. And the Congress, expressing the popular will of the American people, has rejected President Trump’s efforts, as well.

Joe Biden: (02:17)
Now, all of a sudden, this administration believes they found a loophole in the tragedy of Justice Ginsburg’s death. It doesn’t matter to them the Republicans set the precedent just four years ago, when they denied even the courtesy of a hearing to President Obama’s nominee after Justice Scalia passed, after he had only passed away nine the months prior to election day. Didn’t matter to them that millions of Americans already voting on a new president and a new Congress had begun.

Joe Biden: (02:56)
All that does matter is that they see an opportunity to overturn the Affordable Care Act on their way out the door. And as I speak, we are still in the midst of the worst global health crisis in a century, a crisis that has already taken over 200,000 lives, between 750 and 1,000 lives a day and counting. And yet, the Trump administration is asking the Supreme Court right now, as I speak, to eliminate the entire Affordable Care Act. The administration filed a brief in the Supreme Court that concludes, and I quote, “The entire ACA, thus, must fall. The entire ACA, thus, must fall.”

Joe Biden: (04:48)
It doesn’t matter. It doesn’t matter what the American people want. President Trump sees a chance to fulfill his explicit mission: steal away the vital protections of the ACA from countless families who’ve come to rely on them for their health, their financial security, and the lives of those they love. President Trump just tweeted an hour ago, on my way here, and I quote, “Obamacare will be replaced with a much better and far cheaper alternative. If it is terminated in the Supreme Court, it would be a big win for the USA.” Should come as no surprise.

Joe Biden: (05:36)
And then, Saturday, President Trump would nominate Judge Amy Coney Barrett and, on Sunday, lay out clearly what his objective is: to terminate Obamacare. The judge has a written track record, a written track record of disagreeing adamantly with the Supreme Court’s decisions on two occasions upholding the ACA. In fact, not as a judge, but prior to going on the bench, she publicly criticized Chief Justice Roberts’ opinion upholding the law eight years ago.

Joe Biden: (07:03)
Their voices may not matter to Donald Trump. They may not matter to Mitch McConnell. But there are Senate Republicans out there who know, in their hearts, that if they shut out the voices of those during a voting period, during an election, they’re closing the door on American democracy thereafter. This is where the power of the nation resides, in the people, in the rule of law, in precedents we abide by. To subvert both, openly and needlessly, even as Americans cast their vote, would be an irreversible step toward the brink and a betrayal of a single quality that America has borne and built on. The people decide.

Joe Biden: (07:56)
The Senate has to stand strong for our democracy. They must not act on this nomination until the American people finish the process they’re already begun, of selecting their president and their Congress. And I’ve said before, if the people choose Donald Trump, then the Senate should give his nominee a hearing and a vote. If the people do not choose Trump and choose me, President Trump’s nomination should be withdrawn. I should nominate… chosen by a president who’s just been elected by the people… to get a fair hearing, which would not even occur until early February… a confirmation vote.

Joe Biden: (08:43)
The US Constitution provides one chance, one, for the Americans to have their voices heard on who serves a lifetime appointment on the Supreme Court, who makes those big decisions about their healthcare, their civil rights, and much else. That chance is now. That moment is now. And the voters, in my view, are not going to stand for this abuse of power. And, if we’re to call ourselves a democracy, their voices must be heard.

Joe Biden: (09:17)
I urge the American people to keep voting and to let your current senators know that you want to be heard before a vote on confirmation of a new justice. And I urge every senator to take a step back from the brink, take off the blinders on politics for just one critical moment, and stand up for the Constitution you swore to uphold. This is a time to de-escalate, to put an end to the shattering of precedents that has thrown our nation into chaos under this president.

Joe Biden: (09:55)
Just because you have the power to do something doesn’t absolve you of your responsibility to do right by the American people. Uphold your Constitutional duty. Summon your conscience. Stand up for the people. Stand up for our cherished system of checks and balances. Americans are watching. Americans are voting. We must listen to them now. We must allow them to exercise this sacred power. So please listen. Thank you, and God bless America. May God protect our troops. And I’ll take a few questions. Yes, sir.

Speaker 2: (10:38)
Sir, we’ve already [inaudible 00:10:41] seats to the US Supreme Court. But what should be the consequences for Republicans if they force Judge Barrett’s nomination through and confirm her?

Speaker 3: (11:37)
Have you reached out to Senate Republicans that you’ve worked with to urge them not to vote? Have you had any contact with any Republicans [inaudible 00:11:41]?

Joe Biden: (11:44)
No, I have not. I concluded that that would put them in a position, if they were to vote the right way, that they’d be compromised because I called them. But I know I have great respect for a number of my Republican colleagues, my former Republican colleagues. And I’m hoping they will do the right thing.

Joe Biden: (12:32)
I am not… And I know you’re going to be upset with my answer. But what I’m not going to do is play the Trump game, which is a good game he plays. Take your eye off the issue before us. If I were to say yes or no to that, that becomes a big issue. That’s the headline here. I am focused on one thing right now, and I really mean it. I’m focused on making sure the American people understand that they’re being cut out of this process they’re entitled to be part, and the cutout is designed in order to take away the ACA and your health care in the midst of a pandemic. That’s the focus. That’s what it’s on. And that’s the deal. Thank you all so very, very much. Thank you.