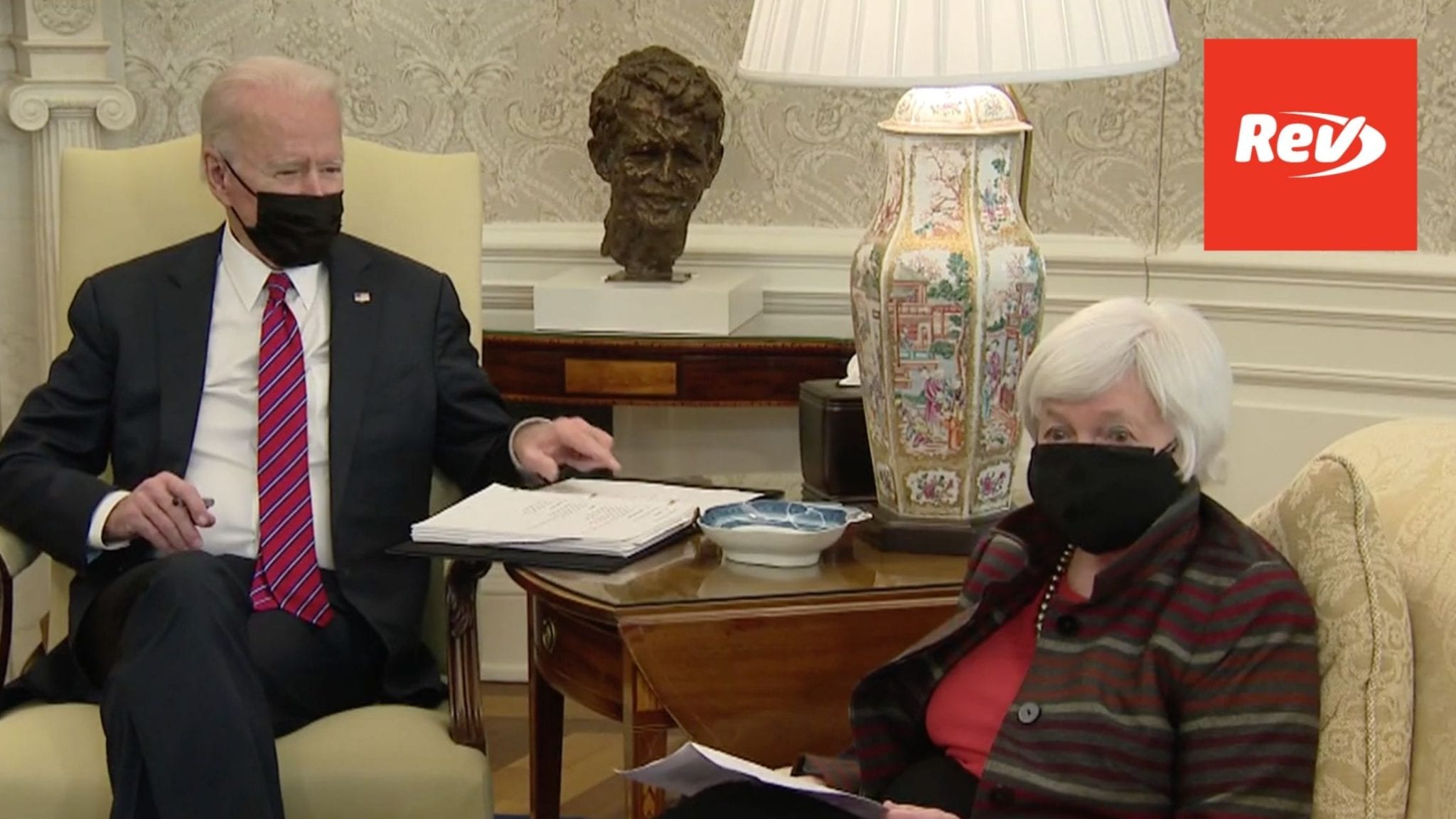 Joe Biden: (00:00)
… accelerating. 900,000 more Americans filed for unemployment insurance in this week alone. 30 million Americans don’t have enough food to eat this week. And interest rates are at historic lows. And the return on smart investments in the economy have never been higher. And it’s not just me saying this. As, I said, it’s a consensus among the vast majority leader economists in the country, as I said, the left, right and center, including advisers to former President Trump and George W. Bush.

Joe Biden: (00:37)
And so I’ve been meeting all morning with other folks as well. The notion here is we would have to act now. There’s no time for any delay. And so we could end up with 4 million fewer jobs this year, according to Moody’s Wall Street firm. And it could take a year longer to return to full employment if we don’t act and don’t act now.

Joe Biden: (01:01)
We could see an entire cohort of kids with a lower lifetime earnings because they’re deprived of another semester of school. Millions of parents, and maybe some of you, millions of parents, particularly moms are forced to stay home, reducing the family wages. And if they’re a single wage earner, it’s really difficult on future job prospects, that they have no choice, but to stay home and take care of their children.

Joe Biden: (01:31)
Millions of people are out of work, unemployed. The future of millions that are held back for no good reason other than our failure to act. So the choice couldn’t be clearer. We have learned from past crises, the risk is not doing too much, the risk is not doing enough. And this is the time to act now. I’ve asked Secretary Yellen who’s been leading this effort, to come in and we’re going to go into some detail among ourselves. But I think she has a statement to make as well.

Janet Yellen: (02:06)
Thank you very much, Mr. President. Well, there is a huge amount of pain in our economy right now, and it was evident in the data released yesterday. Over a million people applied for unemployment insurance last week. And that’s far more than in the worst week of the Great Recession.

Janet Yellen: (02:27)
And economists agree that if there’s not more help, many more people will lose their small businesses, the roofs over their heads, and the ability to feed their families. And we need to help those people before the virus is brought under control.

Janet Yellen: (02:47)
The President’s American Rescue Plan will help millions of people make it to the other side of this pandemic. And it will also make some smart investments to get our economy back on track.

Speaker 4: (03:29)
Mr. President, what do you think of the Johnson and Johnson results.

Joe Biden: (03:32)
I’m waiting to hear from the team on the detail of it. I saw the news reported this morning. I haven’t had a chance to speak with Dr. Fauci.

Joe Biden: (03:39)
One point I want to make that the secretary made. Let’s get this straight. It’s not only that people will be badly, badly hurt if we don’t pass this package, in terms of increased rate of death, in terms of poverty, a whole range of things, but we will also be hurt long-term economically, economically. We need to make these investments so the economy can grow remainder of this year and next year. The investments now will help the economy grow. It will not, in fact, put a drag on the economy of spending this money. It will do the exact opposite. So thank you all very much.