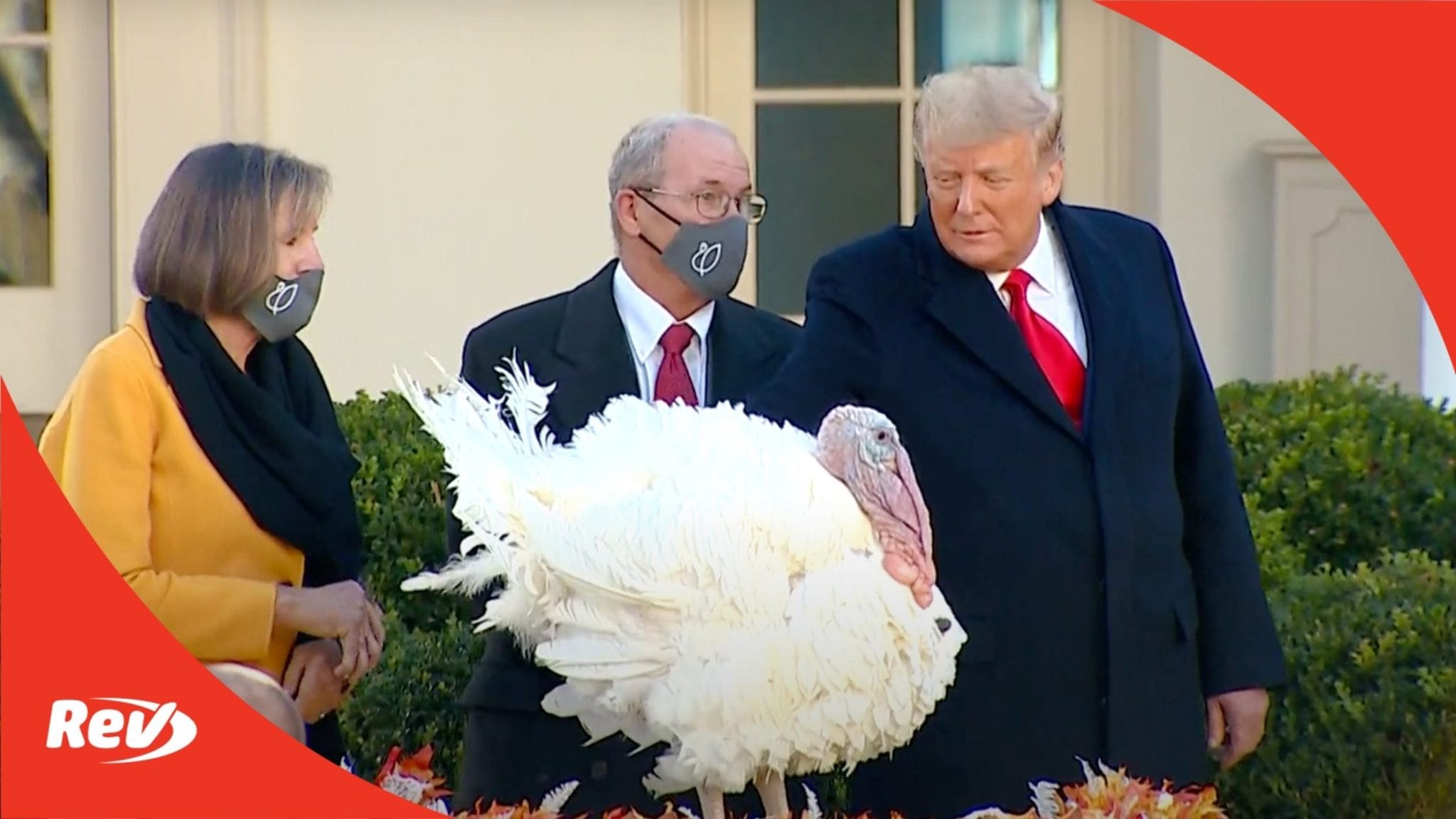 Donald Trump participated in the annual White House turkey pardoning on November 24. Read the transcript of his speech remarks here.

President Donald Trump: (00:09)
Well, thank you very much please. I just want to congratulate everybody. The Dow Jones industrial average just broke for the first time in history, 30,000. That’s good. That’s great for jobs and it’s good for everything and this is the ninth time that we set a record during the course of 2020 and it’s the 48th time that we’ve set the record during the Trump administration and there’s never been anything like that. I just want to congratulate everybody that works so hard in the white house, but maybe most importantly, the people of our country. It’s a tremendous achievement.

President Donald Trump: (00:46)
The first lady and I are thrilled to welcome you all to the beautiful rose garden where the first lady actually worked very hard on renovating it. It was 61 years. It was in rough shape. A very big job, actually. When you go to the wires underground, people have no idea how complex it is, but you’ve done a fantastic job. Thank you very much. We’re also very happy to have with us my daughter, Ivanka and Jared and Theodore, Arabella, Joseph, thank you very much for coming. They like the turkey. Thank you very much. On behalf of the entire Trump family, I want to wish every American a healthy and very happy Thanksgiving.

President Donald Trump: (01:31)
We’re here today to continue a beloved annual tradition, the official presidential pardon of a very, very fortunate turkey because Thanksgiving is a special day for turkeys, I guess probably for the most part not a very good one, when you think about it. The first turkey to dodge the white house dinner table received unofficial clemency when president Abraham Lincoln’s son Tad begged his father to spare his new friend. For the past 73 years, the National Turkey Federation has presented the national thanksgiving turkey to the president starting under president George HW Bush. These birds have received a formal pardon every single year. Today is my honor to present to you this year’s lucky bird, Corn and just in case we needed him, Cob. Corn and Cob. That’s not too hard to remember is that.

President Donald Trump: (02:29)
These two magnificent gobblers were selected from the official presidential flock of 30 turkeys, some real beauties. They were raised by the chairman of the National Turkey Federation himself, Ron Cardel. Ron, thank you very much, Ron. Please stand up. Great job. Ron, thank you for being here and your family. Beautiful family. Thank you very much for being here. Appreciate it. Like so many presidential flocks this one started in the great state of Iowa, in what can only be described as an act of blatant pandering and by the way, I love the state of Iowa. These two turkeys sought to win the support of Iowans across the state, by naming themselves Corn and Cob. After today’s ceremony, these birds will retire under the care of skilled veterinarians at Iowa State University, a tremendous university in Ames. Once there, people of all ages will be able to visit them and learn about poultry science, veterinary medicine and the noble American tradition of farming. We love our farmers I’ll tell you. We hope and we know that’s going to happen that Corn and Cob have a very long happy and memorable life.

President Donald Trump: (03:48)
This year our nation commemorates the 400th anniversary of the pilgrims landing on Plymouth Rock. After arriving in the new world, the brave men and women of the Mayflower endured a bitter and dangerous winter, very, very dangerous winter. Many were sick, most were starving and all were praying for a miracle. Thankfully God heard their prayers. From our earliest days America has always been a story of perseverance and triumph, determination and strength, loyalty and faith. This week in a time that is very unusual, but in so many ways, very, very good, what we’ve endured and been able to endure with the vaccines now coming out one after another, it’s an incredible thing that happened. One of the greatest medical achievements that this planet has ever seen, but it’s time to remember that we live in a great, great country, the greatest of them all and there’s nothing even close as far as I’m concerned.

President Donald Trump: (04:51)
Every American can be united in Thanksgiving to God for the incredible gifts he has bestowed upon us, the blessings of family, community and this exceptional beautiful and great country. It’s greater than ever before. During this Thanksgiving, we extend our eternal gratitude to the doctors, nurses, healthcare workers and scientists who have waged the battle against the China virus and we give thanks for the vaccines and therapies that will soon end the pandemic. It’s just such a tremendous feeling to know that they’re coming and they’ll be coming probably starting next week or shortly thereafter.

President Donald Trump: (05:33)
We send our love to every member of the armed forces and the law enforcement heroes risking their lives to keep America safe, to keep America great and as I say, America first. Shouldn’t go away from that. America first. We give thanks to the priceless freedoms that we’ve inherited and we ask God to watch over and protect our nation and its people during this incredible holiday and in all of the years to come, we ask that of God.

President Donald Trump: (06:06)
Once again, Melania and I wish to thank everybody for your incredible courtesies and also wish you a happy Thanksgiving and now it’s time for the moment of our guests of honor. They’ve been waiting and in this case, he’s been waiting for this and bring him out. Look at that beautiful, beautiful bird. Oh, so lucky. That is a lucky bird.

President Donald Trump: (06:58)
Corn, I hear by grant you a full pardon. Thank you Corn. Iowa farm. I knew I liked you.

President Donald Trump: (07:21)
Happy Thanksgiving to everybody. Thank you very much.

President Donald Trump: (07:24)
Thank you everybody.

Speaker 1: (07:25)
Any pardons before you leave office? Will you be issuing a pardon for yourself?