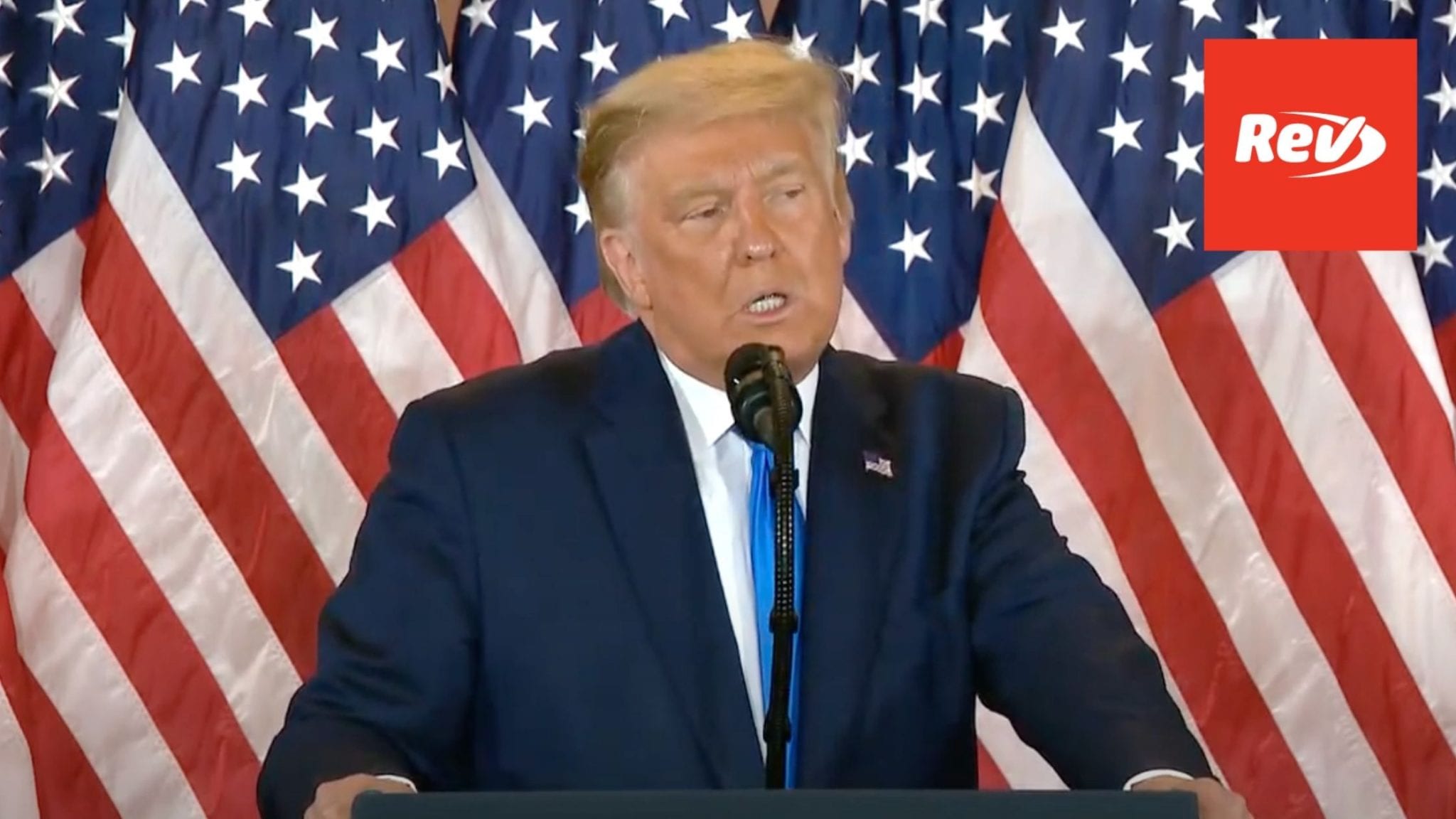 President Donald Trump & Vice President Mike Pence gave speeches on the night of the 2020 presidential election. Trump talked about his leads in key states and said, “frankly, we did win this election,” appearing to claim victory before many states finished counting votes. He also mentioned “going to the U.S. Supreme Court” over the election. Read the full transcript of the speeches here.

Donald Trump: (00:54)
I want to thank the first lady, my entire family, and Vice President Pence, Mrs. Pence for being with us all through this. And we were getting ready for a big celebration. We were winning everything and all of a sudden it was just called off. The results tonight have been phenomenal and we are getting ready… I mean, literally we were just all set to get outside and just celebrate something that was so beautiful, so good. Such a vote, such a success to citizens of this country have come out in record numbers. This is a record. There’s never been anything like it to support our incredible movement. We won states that we weren’t expected to win. Florida, we didn’t win it. We won it by a lot.

Donald Trump: (01:54)
We won the great State of Ohio. We won Texas, we won Texas. We won Texas. We won Texas by 700,000 votes and they don’t even include it in the tabulations. It’s also clear that we have won Georgia. We’re up by 2.5% or 117,000 votes with only 7% left. They’re never going to catch us. They can’t catch us. Likewise we’ve clearly won North Carolina. Where we’re up 1.4%. We’re 77,000 votes with only approximately 5% left. They can’t catch us. We also, if you look and you see Arizona, we have a lot of life in that. And somebody declared that it was a victory for… And maybe it will be. I mean, that’s possible. But certainly there were a lot of votes out there that we could get because we’re now just coming into what they call Trump territory. I don’t know what you call it. But these were friendly Trump voters. And that could be overturned.

Donald Trump: (03:14)
The gentleman that called it, I watched tonight. He said, “Well, we think it’s fairly unlikely that he could catch.” Well, fairly unlikely? And we don’t even need it. We don’t need that. That was just a state that if we would have gotten it, it would have been nice. Arizona. But there’s a possibility, maybe even a good possibility. In fact, since I saw that originally it’s been changed and the numbers have substantially come down just in a small amount of votes. So we want that obviously to stay in play. But most importantly, we’re winning Pennsylvania by a tremendous amount of votes.

Donald Trump: (04:14)
We’re up 600… Think of this. Think of this. Think of this. We’re up 690,000 votes in Pennsylvania, 690,000. These aren’t even close. This is not like, “Oh, it’s close…” With 64% of the vote in, it’s going to be almost impossible to catch. And we’re coming into good Pennsylvania areas where they happen to like your president. I mean, it’s very good. So we’ll probably expand that. We’re winning Michigan, but I’ll tell you, I looked at the numbers. I said, “Wow.” I looked, I said, “Wow, that’s a lot.” By almost 300,000 votes and 65% of the vote is in and we’re winning Wisconsin. And I said, “Well, we don’t need all of them. We need…” Because when you add Texas in, which wasn’t added, I spoke with the really wonderful governor of Texas just a little while ago, Greg Abbott, he said, “Congratulations.” He called me to congratulate me on winning Texas.

Donald Trump: (05:26)
I mean, we won Texas. I don’t think they finished quite the tabulation, but there’s no way. And it was almost complete, but he congratulated me. Then he said, “By the way, what’s going on? I’ve never seen anything like this.” Can I tell you what, nobody has. So we won by 107,000 votes with 81% of the vote. That’s Michigan. So when you take those three states in particular and you take all of the others, I mean, we have so many… We had such a big night. You just take a look at all of these states that we’ve won tonight, and then you take a look at the kind of margins that we’ve won it by, and all of a sudden, it’s not like we’re up 12 votes and we have 60% left. We won states. And all of a sudden I said, “What happened to the election? It’s off.” And we have all these announcers saying what happened? And then they said, “Oh.”

Donald Trump: (06:24)
Because you know what happened? They knew they couldn’t win so they said, “Let’s go to court.” And did I predict this, Newt? Did I say this? I’ve been saying this from the day I heard they were going to send out tens of millions of ballots. They said exactly, because either they were going to win or if they didn’t win, they’ll take us to court. So Florida was a tremendous victory. 377,000 votes. Texas, as we said. Ohio, think of this. Ohio a tremendous state, a big state. I love Ohio. We won by 8.1%, 460,00…think of this. Almost 500,000 votes. North Carolina, a big victory with North Carolina. So we won there. We lead by 76,000 votes with almost nothing left. And all of a sudden everything just stopped.

Donald Trump: (07:28)
This is a fraud on the American public. This is an embarrassment to our country. We were getting ready to win this election. Frankly, we did win this election. We did win this election. So our goal now is to ensure the integrity for the good of this nation. This is a very big moment. This is a major fraud in our nation. We want the law to be used in a proper manner. So we’ll be going to the US Supreme Court. We want all voting to stop. We don’t want them to find any ballots at four o’clock in the morning and add them to the list. Okay? It’s a very sad moment. To me this is a very sad moment and we will win this. And as far as I’m concerned, we already have won it.

Mike Pence: (08:46)
Thank you, Mr. President. I want to join you in thanking more than 60 million Americans who have already cast their vote for four more years for president Donald Trump in the White House. While the votes continue to be counted, we’re going to remain vigilant, as the president said. The right to vote has been at the center of our democracy since the founding of this nation and we’re going to protect the integrity of the vote. But I really believe with all of my heart, with the extraordinary margins, Mr. President, that you’ve inspired in the states that you just described, and the way that you launched this movement across the country to make America great again, I truly do believe as you do that we are on the road to victory and we will make America great again, again. Thank you, Mr. President.