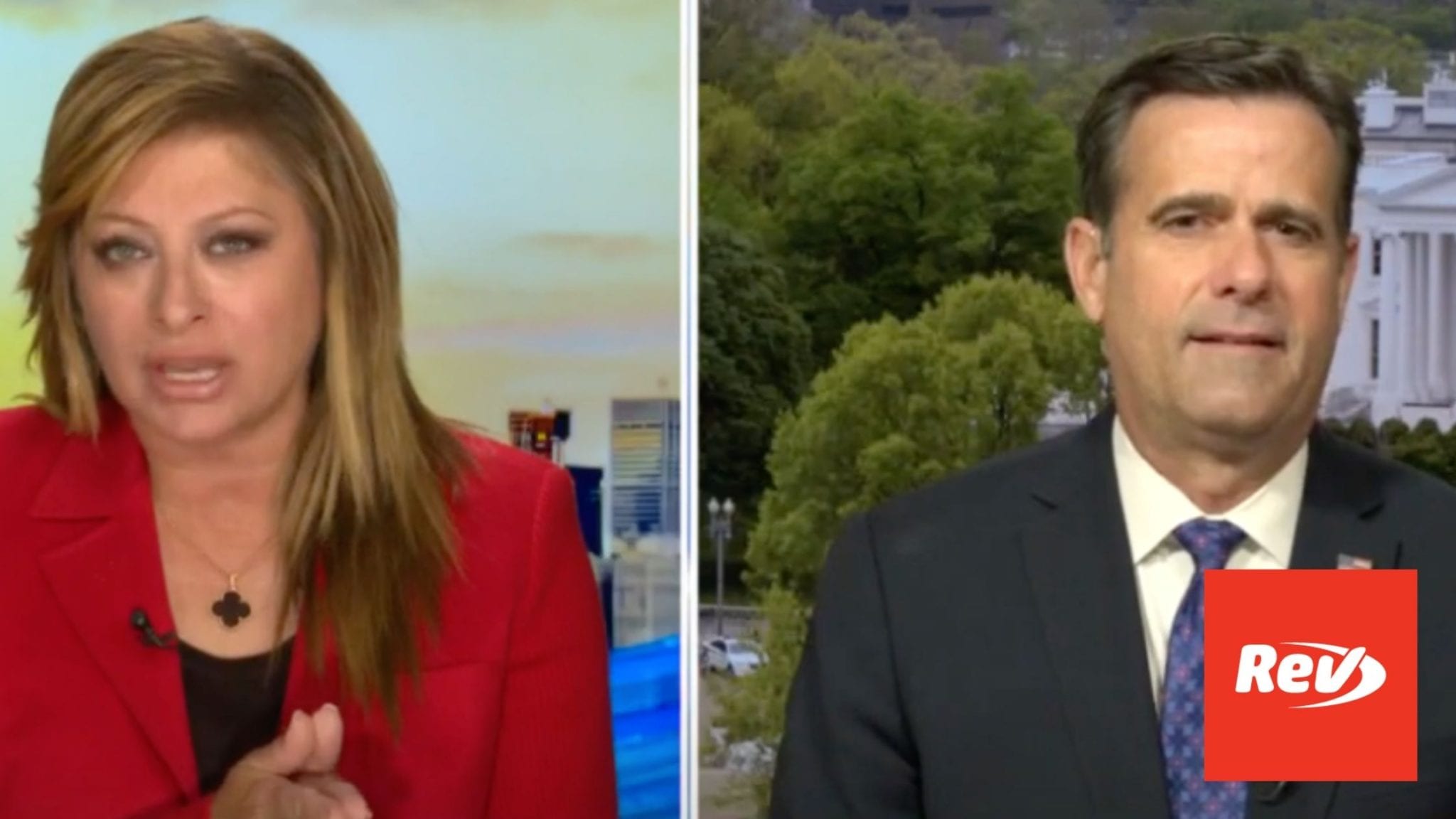 Director of National Intelligence John Ratcliffe was interviewed on Fox News on October 19. He said Hunter Biden’s emails are not part of a Russian disinformation campaign, as Rep. Adam Schiff suggested. Read the transcript of the interview with Ratcliffe’s remarks here.

Maria: (00:00)
With me right now is the Director of National Intelligence, John Ratcliffe.

Maria: (00:04)
Director, it’s great to have you this morning. Thank you so much for being here.

Maria: (00:10)
I want to start on the validity of all of this, because we have been doing a deep dive into this laptop, and these emails, which indicate Hunter Biden was cashing in on his father’s position. Adam Schiff the chairman of the intel committee is out at about this weekend on Sunday morning shows saying all of this news is just Russian disinformation, and it’s not true. You are the director of National Intelligence, you see more intelligence than anybody in the country, other than the president of the United States. So, you can tell us what’s real and what’s fake. Is this Russian disinformation, Director?

John Ratcliffe: (00:52)
So Maria, it’s funny that some of the people that complain the most about intelligence being politicized are the ones politicizing intelligence. And, unfortunately, in this case, it is Adam Schiff, the chairman of the House Intelligence Committee, who, as you pointed out, on Friday said that the intelligence community believes that Hunter Biden’s laptop and the emails on it are part of some Russian disinformation campaign.

Maria: (02:39)
So, what are we supposed to do? Hear Adam Schiff calling it Russia disinformation two weeks before an election, so that people are under the impression that this is not real. So, is was Adam Schiff lying to the American people? This is an elected official.

John Ratcliffe: (02:56)
Yeah so Maria, what we do is we tell the truth. And my role, as the Director of National Intelligence is to not allow people to leverage the intelligence community for a political narrative that’s not true. And, in this case, Adam Schiff saying that this is part of some Russian disinformation campaign, and that the IC has assessed that, or believes that is simply not true. So, I appreciate the opportunity to be able to tell the American people that that’s the case. And I’ll continue to do that, whether it’s Republicans or Democrats, if they try and leverage the intelligence community for political gain, I won’t allow it.

Maria: (03:33)
Well, I mean, what do we know? I mean, the FBI has been sitting on this for a year Director Ratcliffe. Why didn’t the FBI raise this issue while President Trump was being impeached? If they had this information since November, December 2019, two months later, February 16th was … January 16th, rather was the impeachment trial, which went all the way until February 5th, no mention from the FBI, what they were sitting on. And the impeachment trial was all about President Trump’s phone call with the head of Ukraine. Wouldn’t that have been the opportunity for the FBI to say, “Hold on, we have this and we’re investigating it”?

John Ratcliffe: (04:15)
I think so, Maria. From my perspective, you remember, during the impeachment I was a member of Congress at the time. And I would remind everyone that during that time, the first administration to express concern about Hunter Biden and his relationship with Burisma, and what was going on in the Ukraine was the Obama administration, it wasn’t the Trump administration. And that was raised during the impeachment trial. But, again, those are fair questions for the FBI. And I heard Senator Johnson’s concerns about that, and the FBI should be providing that information to him, and other members of Congress and to the American people to the extent it’s not related to an investigation but, again, to underscore the first point that I made, this has nothing to do with the intelligence community, or Russian disinformation. If it was, I would know that. So, to be clear, it’s not.

Maria: (05:05)
But this is the same situation that we faced around the narrative that President Trump colluded with Russia. And you were the Congressman investigating much of this during 2018 and 2019. You joined me on my program many times asking the FBI to release documents. They didn’t. They sat on documents, so people did not really understand. It took you coming out just a few weeks ago and declassifying handwritten notes that John Brennan wrote, which indicated Hillary Clinton had the idea to tie President Trump to Russia, and the FBI knew it. Again, that was not released until a couple of weeks ago by you. How long did the FBI sit on that?

John Ratcliffe: (05:53)
Well, Maria, so to remind people what I declassified, it was authentic Russian intelligence. It was Russian intelligence that was briefed by the former CIA director, John Brennan to President Obama and Vice President Biden. And then, it was properly referred by the CIA to the FBI for investigation. And it all related to a Hillary Clinton plan to create a Trump-Russia collusion narrative. That wasn’t true. It wasn’t just the FBI that knew that, though, it was the intelligence community, and our law enforcement community that knew that. And I think everyone knows, at this point, that Hillary Clinton did create the Trump-Russia collusion narrative. She hired Christopher Steele for that purpose. And it was used in connection with the Steele dossier was used for FISA applications and all of that.

John Ratcliffe: (06:40)
I think what’s different about when I declassified that information, it was the first time that members of Congress and the American people know, now, that our intelligence community, and our law enforcement community were aware of that information before the crossfire hurricane counter-intelligence investigation was ever opened. And those are the issues that John Durham is looking at. And those are the issues that have resulted in what we know aspects of that counter-intelligence investigation were illegal. They were criminal. We know that. We know what happened at the FISA Court was illegal. And, as a result, one person has already pled guilty and will go to jail. And, hopefully, as a result of John Durham’s investigation, we’ll, ultimately, find out who else was involved, what other crimes were committed. And that process will have to play out.

John Ratcliffe: (07:29)
But you’re right, Maria. Remember, when we started all of this and we were doing those interviews, everyone said, “This is a bunch of nonsense. There’s no abuse at the FISA course. There was no criminality there.” And I told you, look, I’ve seen these underlying applications. And I know what I know. And what happened here was illegal and it was improper. And, ultimately, we got to the truth.

Maria: (07:52)
Well, I’m talking with the Director of National Intelligence this morning, John Ratcliffe, and you just heard President Trump, and then Congressman Adam Schiff pushing the blame on the Kremlin. Claiming Russia is responsible for the Hunter Biden email story. And I’m back with Director Ratcliffe.

Maria: (08:06)
Director, how is it possible that an elected official gets away with going on television, and saying something as false as these emails, Hunter Biden’s situation is not true, it’s just information from the Kremlin? Even after four years, three years, really where Adam Schiff went on lots of shows and said that President Trump colluded with Russia, and that collusion was in plain sight. Why is there no accountability? He’s an elected official, how does he come out on the news media and say all of these things, if it’s not true, Director?

John Ratcliffe: (08:44)
Well, unfortunately, as you know Maria, was a member of Congress and members of Congress have the ability, and have a platform to say things, and to say those things not under oath, and to make representations to the American people. Unfortunately, sometimes the things that they say, and the things that they represent are not true. And, in this case with regard to Hunter Biden’s laptop being part of a Russian disinformation campaign and the intelligence community believing that or assessing, that is simply not true.

John Ratcliffe: (09:31)
But to your earlier point, Maria, about how can people trust what’s going on is this is an administration, I realize it maybe hasn’t happened as quickly as people want, but President Trump has put people in important positions to bring truth to the American people about these issues. Yeah, I shouldn’t have been the one, four years later, to have to bring this information to light. But the fact is I’ve been able to do that and I’ll continue to do that. And I think that one of the things that the American people have to consider …

John Ratcliffe: (10:00)
Some of which has now been proven to be criminal, those are the same people that want to return to power. They want to have the same opportunity to control the leavers of power and to, again, mislead the American people. So, I think that’s something that the American people should consider as they go in, and look at elections and, and everything that is going on in this country. But, again, I think it’s important that we have the opportunity to bring truth to what the American people should know. And I’m going to continue to do that as long as I’m privileged to hold this position.

Maria: (10:34)
So, we know that Hillary Clinton comes up with the idea to tie Trump to a Russia scandal. And then, the intelligence agencies of our great country are weaponized. And there is entrapment going on, where Trump campaign people were targeted unlawfully like Carter Page, who was wiretapped for a year, no charges were ever logged against Carter Page. How come we haven’t seen more accountability? I mean, people out there might say, “Well, yeah, okay Hillary Clinton came up with a story against her political opponent. And you say that the FBI was complicit in all of this, but we don’t see any indictments. We don’t see any prosecutions.” What’s taking so long, Director? Why can’t the American people actually see justice in all of this?

John Ratcliffe: (11:20)
Well, again, I think some of this is because some of the documents that underscore the abuses of power are just coming to light. I mean, I’ve just declassified some of them, and that has been a process that’s been in the works. But with respect to the accountability, I respect the fact that John Durham … prosecutors shouldn’t be looking at election calendars. They should be concerned with the fair administration of justice. And I’m sure that John Durham is trying to do that. And, frankly, presents the best opportunity for there to be that accountability and that justice. There have been indictments, or there has been an indictment, and someone will go to prison for things that occurred at the FISA Court that shouldn’t have happened. My hope is, and our best chance for there to be accountability, and for there to be people held responsible for things that shouldn’t have happened in the intelligence community, and in the law enforcement community against a political campaign, against a political candidate by the other party is to not put those folks back in power, and for this to be swept away.

Maria: (12:35)
Should there be a special counsel investigating this, that stays regardless of who’s in the White House next year?

John Ratcliffe: (12:42)
Well, again, I think the most important thing, without getting into special councils, is let’s let the process of justice work its way through. There’s someone that is approaching it carefully, it’s resulted an indictment. I think there’ll be more indictments …