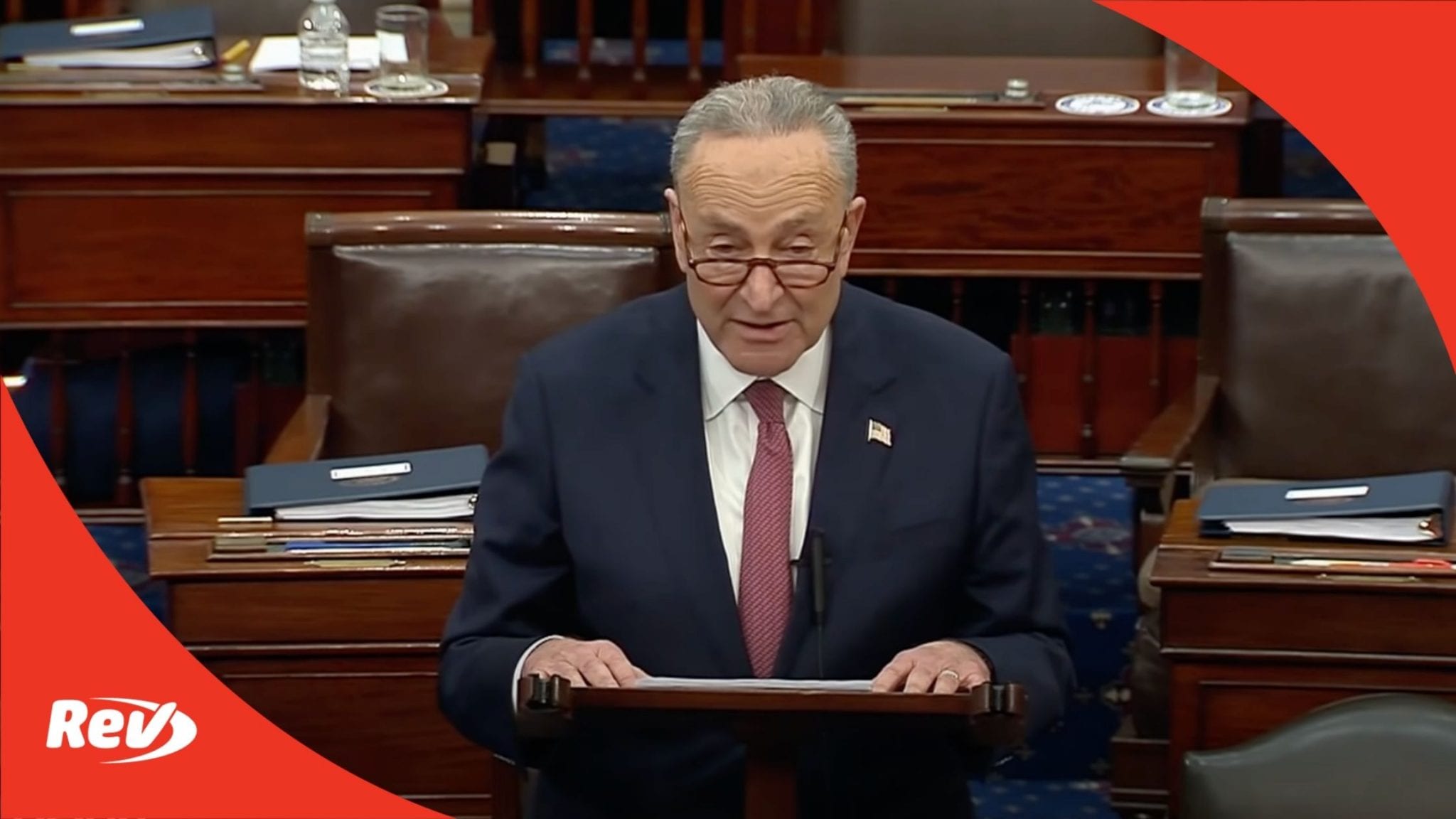 Senate majority leader Chuck Schumer gave a speech on the Senate floor after the Senate voted to acquit Donald Trump in his second impeachment trial on February 13, 2021. Read the full transcript here.

Chuck Schumer: (00:00)
Mr. President. I ask unanimous consent. The Senate being a period of morning business with senators permitted to speak therein for up to 10 minutes each.

Speaker 2: (00:08)
Without objection, it’s awarded. Does any senator seek recognition?

Chuck Schumer: (00:54)
The case of Donald Trump’s second impeachment trial was open and shut. President Trump told a lie, a big lie, that the election was stolen and that he was the rightful winner. He laid the groundwork for this big lie in the months before the election, he told the big lie on election night, and he repeated the big lie more than 100 times in the weeks afterwards.

Chuck Schumer: (01:18)
He summoned his supporters to Washington, assembled them on the ellipse, whipped them into a frenzy and directed them at the Capitol. And then he watched as the violence unfolded and the capitol was breached, and his own vice-president fled for his life, and President Trump did nothing.

Chuck Schumer: (01:37)
None of these facts were up for debate. We saw it, we heard it, we lived it. This was the first presidential impeachment trial in history in which all senators were not only judges and jurors, but witnesses to the constitutional crime that was committed.

Chuck Schumer: (02:33)
This was the most egregious violation of the presidential oath of office and a textbook example, a classic example of an impeachable offense worthy of the Constitution’s most severe remedy. In response to the incontrovertible fact of Donald Trump’s guilt, the Senate was subject to a feeble and sometimes incomprehensible defense of the former president. Unable to dispute the case on the merits, the former president’s counsel treated us to partisan vitriol, false equivalence, and outright falsehoods.

Chuck Schumer: (03:15)
We heard the roundly debunked jurisdictional argument that the Senate can not try a former official, a position that would mean that any president could simply resign to avoid accountability for an impeachable offense, a position which in effect would render the Senate powerless to ever enforce the disqualification clause in the constitution.

Chuck Schumer: (03:36)
Essentially, the president’s counsel told the Senate that the constitution was unconstitutional. Thankfully, the Senate took a firm stance, set a firm precedent with a bipartisan vote in favor of our power to try former officials for acts they committed while in office.

Chuck Schumer: (03:57)
We heard the preposterous claim that the former president’s incitement to violence was protected by the First Amendment. The First Amendment, right to free speech protects Americans from jail, not presidents from impeachment. If the president had said during World War II, that “Germany should attack the United States on Long Island, we’ve left it undefended.” I suspect Congress would have considered that an impeachable offense.

Chuck Schumer: (04:25)
Finally, the Defense Counsel said that President Trump was not directly responsible for the violence at the Capitol. “His words were merely a metaphor. His directions were merely suggestions, and the violent mob was just a spontaneous demonstration.” But wind the clock back and ask yourself, if at any point Donald Trump did not do the things he did with the attack on the Capitol have happened, there’s only one answer to this question. Of course not.

Chuck Schumer: (05:24)
Here’s what the Republican leader of the Senate said. “The mob that perpetrated the ‘failed insurrection’ was on January six, was ‘provoked’ by President Trump. You want another word for provoke? How about incite? Yet still, still, the vast majority of the Senate Republican caucus, including the Republican leader, voted to acquit former President Trump signing their names in the columns of history alongside his name forever.

Chuck Schumer: (06:41)
The former president tried to overturn the results of a legitimate election and provoked an assault on our own government. And well over half the Senate Republican conference decided to condone it. The most despicable act than any president has ever committed, and the majority of Republicans cannot summon the courage or the morality to condemn it.

Chuck Schumer: (07:36)
As sad as that fact is, as condemnable as the decision was, it is still true that the final vote on Donald Trump’s conviction was the largest and most bipartisan vote of any presidential impeachment trial in American history. I salute those Republican patriots who did the right thing, it wasn’t easy, we know that.

Chuck Schumer: (08:00)
Let their votes be a message to the American people, because my fellow Americans, if this nation is going to long endure, we as a people cannot sanction the former president’s Congress, because if lying about the results of an election is acceptable, if instigating a mob against the government is considered permissible, if encouraging political violence becomes the norm, it will be open season, open season on our democracy. And everything will be up for grabs by whoever has the biggest clubs, the sharpest spears, the most powerful guns.

Chuck Schumer: (08:42)
By not recognizing the heinous crime that Donald Trump committed against the constitution, Republican senators have not only risked, but potentially invited the same danger that was just visited upon us. So let me say this, despite the results of the vote on Donald Trump’s conviction in the court of impeachment, he deserves to be convicted, and I believe he will be convicted in the court of public opinion.

Chuck Schumer: (09:13)
He deserves to be permanently discredited, and I believe he has been discredited in the eyes of the American people, and in the judgment of history. Even though Republican senators prevented the Senate from disqualifying Donald Trump for any office of honor, trust or profit under these United States, there is no question Donald Trump has disqualified himself.

Chuck Schumer: (10:05)
Six hours after the attack on January 6th, after the carnage and mayhem was shown on every television screen in America, President Trump told his supporters to, “Remember this day forever.” I ask the American people to heed his words, remember that day forever, but not for the reasons the former president intended. Remember the panic in the voices over the radio dispatch, the rhythmic pounding of fists and flags at the chamber doors.

Chuck Schumer: (10:43)
Remember the crack of a solitary gunshot. Remember the hateful and racist Confederate flags flying through the halls of our union. Remember the screams of the bloody officer crushed between the onrushing mob and a doorway to the Capitol, his body trapped in the breach. Remember the three Capitol police officers who lost their lives.

Chuck Schumer: (11:09)
Remember that those rioters actually succeeded in delaying Congress from certifying the election. Remember how close our democracy came to ruin. My fellow Americans, remember that day, January 6th, forever.

Chuck Schumer: (11:29)
The final terrible legacy of the 45th president of the United States, and undoubtedly our worst. Let it live on in infamy, a stain on Donald John Trump that can never, never be washed away.

Chuck Schumer: (11:51)
Mr. President on Monday, we’ll recognize president’s day. Part of the commemoration in the Senate will be the annual reading of Washington’s Farewell Address. Aside from winning the revolutionary war, I consider it his greatest contribution to American civil life. And it had nothing to do with the words he spoke, but the example it set. Washington’s farewell address established for all time that no one had the right to the office of the presidency, that it belonged to the people.

Chuck Schumer: (12:33)
What an amazing legacy, what an amazing gift to the future generations. The knowledge that this country will always be greater than any one person, even our most renowned. That’s why members of both parties take turns, reading Washington’s address once a year in full into the record, to pledge common attachment to the selflessness at the core of our democratic system.

Chuck Schumer: (13:02)
This trial was about the final acts of a president who represents the very antithesis of our first president, and sought to place one man before the entire country, himself. Let the record show, let the record show, before God, history, and the solemn oath we swear to the constitution, that there was only one correct verdict in this trial, guilty.

Chuck Schumer: (13:32)
And I pray that while justice was not done in this trial, it will be carried forward by the American people who above any of us in this chamber determine the destiny of our great nation. I yield the floor.