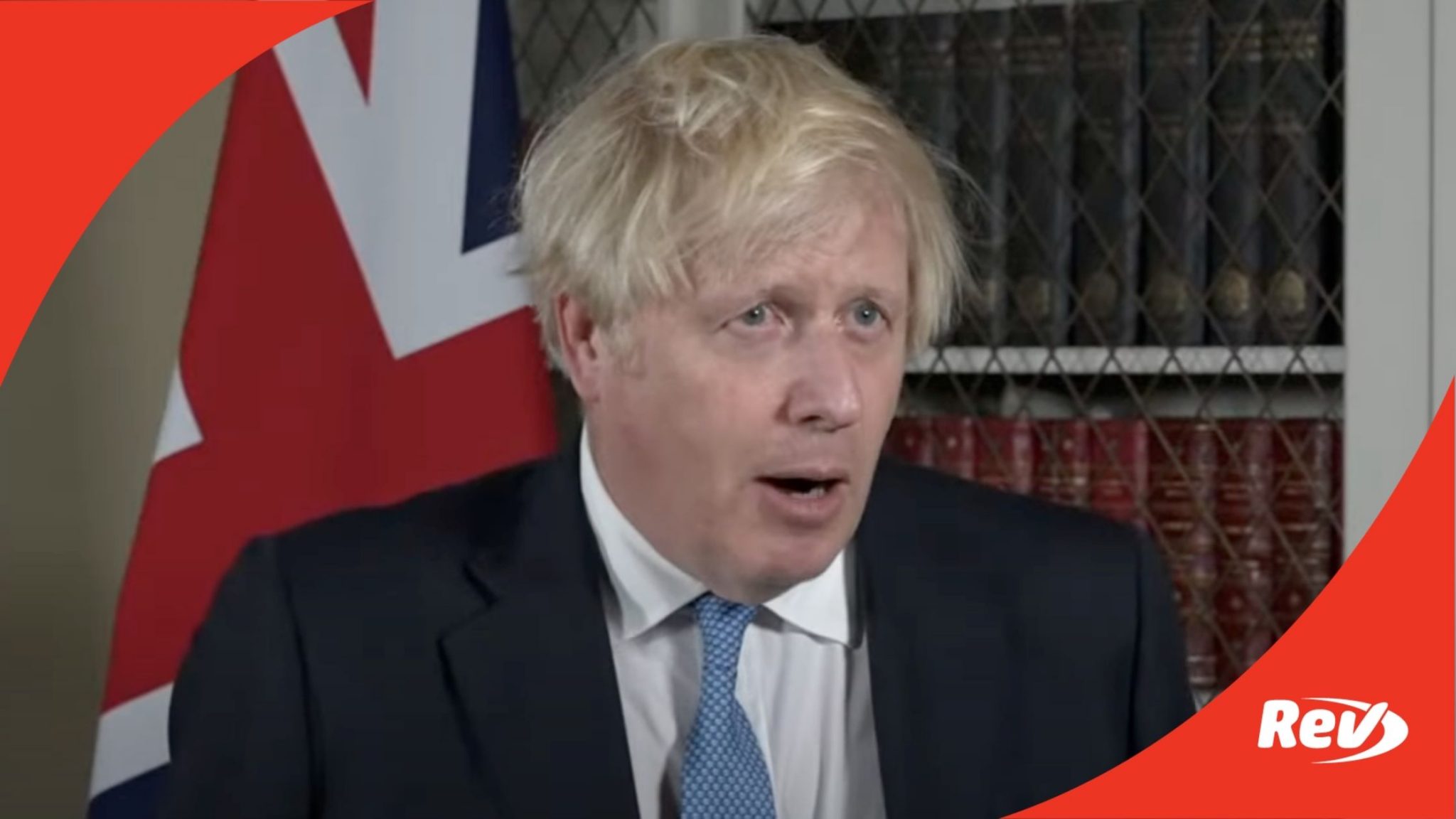 UK Prime Minister Boris Johnson gave an August 15 interview on the Taliban taking over several cities in Afghanistan and the capital of Kabul. Read the full transcript of the interview here.

Speaker 1: (00:02)
Let us begin. Prime minister, what’s the British government’s assessment of what’s happening in Afghanistan? Who is in charge? And have you just presided over a route?

Boris Johnson: (00:28)
I’ve just been in charge of another Cobra meeting because as you rightly say, the situation in Afghanistan continues to be extremely difficult, getting more difficult, I would say. And our priority is to make sure that we deliver on our obligations to UK nationals in Afghanistan, to all those who’ve helped to the British effort in Afghanistan over 20 years and to get them out as fast as we can. So the ambassador is working around the clock, has been there in the airport to help process the applications. As you know, about 2,000 Afghans have already left and come to this country under our resettlement scheme.

Boris Johnson: (01:16)
And we’re going to get as many as we can out in the next few days, but our play in the situation remains a very difficult and it’s clear that there is going to be, or there is very going to be very shortly a new government in Kabul or a new political dispensation, however, you want to put it. And I think it’s very important that the west collectively should work together to get over to that new government by the Taliban or anybody else. That nobody wants Afghanistan once again to be a breeding ground for terror.

Boris Johnson: (02:02)
And we don’t think that it’s in the interests of the people of Afghanistan, but it should lapse back into that state, that pre-2001 state. And so, what the UK will be doing is working with our partners in the UN Security Council and the P5 to get that in NATO. There’s an [inaudible 00:02:26] had to cancel on Friday to get that message out, but we don’t want anybody bilaterally recognizing the Taliban. We want a united position amongst all the like-minded, as far as we can get one, so that we do whatever we can to prevent Afghanistan lapsing back into being a breeding ground for terror.

Sam: (02:46)
From what you’ve just said, prime minister, it sounds like your number one priority for Afghanistan is making sure it doesn’t become a breeding ground for terrorism. Have you just thrown human rights out of the window, or are you just going to beg the Taliban that there’s in some way kind of Taliban 2.0, a new shiny and nicer version of what we saw, that you said was unacceptable in the commons five weeks ago.

Boris Johnson: (03:07)
I think we need to see… Of course we continue to attach huge importance to human rights, to equalities. I think of everything that the UK has helped to achieve the over the last 20 years, the sacrifice of that mission. A lot of women and girls were educated thanks to the efforts of the UK. The human rights or equalities were promoted and protected in a way that Afghanistan hadn’t hadn’t seen before. Of course, we don’t want to see that throw it away. And what we’re trying to do now is to concert the rest of the like-minded around the world of whom there are a great many to make sure that we don’t prematurely, bilaterally recognize a new government in Kabul without for me a common view and setting the same conditions about how that government should be. And yes, of course, it’s not just about terrorism. It’s about human rights and many other things.

Sam: (04:10)
Prime minister, there are perhaps thousands of British nationals in Afghanistan. Most Americans are going to be withdrawn before Tuesday. You’ll relying on commercial aircraft to get many of them out. That’s not going to happen. How are you going to speed it up? Have you got a time commitment and can you say how many people are there?

Boris Johnson: (04:30)
I can certainly say, Sam, that we’ve already got a large number of Afghan nationals out. We’re working very fast on all the UK nationals on all the consular cases and they’re coming forward in numbers at the moment. But I do appeal to all those who have yet to make themselves known to us at the airport to come forward. But we certainly have the means at the moment to get them out. It’s just a question of making sure that they’re able to do it over the next few days.

Sam: (05:03)
Do you worry that could turn into a hostage situation where the Taliban keep them in Afghanistan? The stakes could escalate really quickly when it comes to British people in Afghanistan.

Boris Johnson: (05:12)
I think that the teams that we’ve got on the ground there in Kabul airport and having [inaudible 00:05:18] international effort, doing an outstanding job in pretty difficult circumstances. There’s clearly a change of regime now happening in Afghanistan that has implications for the UK presence for the platform that we’ve had there for some years. But don’t forget, Sam, what all our viewers know. The UK presence has been very, very substantially reduced since 2014. The numbers of UK nationals there are not enormous. And of course, the vast bulk of the embassy staff and the officials there are already now outside Afghanistan.

Boris Johnson: (05:57)
But what we’ll do is we’ll keep going with the teams that we have to process as many applications that we have in the time available. But more important I think is this international effort now to make sure that we bring the world together, bring the UN Security Council together, the North Atlantic Council, to look at the situation, to look back at 20 years of effort and achievement in Afghanistan. And to make sure that we don’t throw those gains away.

Sam: (06:24)
Refugees, Canada has said, it’s going to let in 20,000 Afghans. Can you match that? Because at the moment the signals coming out of the British government are that they’re worried about the signal that letting too many in might [inaudible 00:06:36] canceling scholarships for Afghan nationals who are going to come here to study. Is that really the kind of global Britain that you want to project?

Boris Johnson: (06:43)
Well, Sam, don’t forget. We’ve already received I think 2,000 or 1,978 Afghan nationals as part of our Afghan resettlement program. And I think we can be pleased with that. So it’s a good way maker. I imagine more to come. On your point about scholarships, I think that is very important. There are, as you know, 34 [inaudible 00:07:07] scholars right now in Kabul. We do want to make sure that they’re able to come. And so we’re doing whatever we can to accelerate their visas to get them over as well.

Sam: (07:19)
This has caught you by surprise, hasn’t it? This wasn’t predicted, the fall of Afghanistan when you did your statement on July the 8th to the House of Commons. What have you got wrong?

Boris Johnson: (07:30)
I think if you look back at that statement, I’m afraid it was very clear from what I said, that the situation in Afghanistan was going to change and that we needed to reflect on that.

Boris Johnson: (07:46)
I think it’s fair to say that the US decision to pull out has accelerated things. But this is in many ways, something that has been a chronicle of an event foretold. We’ve known for a long time that this was the way things were going. And as I said before, this is a mission whose military component really ended for the UK in 2014. What we’re dealing with now is the very likely advent of a new regime in Cabo. We don’t know exactly what kind of a regime that will be. What we want to do is make sure that we, as the UK, pulled together our international partners, our like minded partners, so that we deal with that regime in a concerted way.

Sam: (08:38)
Finally, we’ve had cabinet ministers on the holiday, critical cabinet ministers to this question like [inaudible 00:08:44] away over the last few days. Now, it’s all coming to a focal point because you’ve asked for parliament to be recalled. Is it the duty of every MP to attend Wednesday’s debate?

Boris Johnson: (08:55)
I think that it’s an important moment for the country in the sense that this has been going on for this… This is a commitment that’s been going on for 20 years. You remember we went into Afghanistan 20 years ago because America was attacked and America decided to invoke article five of the NATO treaty appealing to all America’s allies to mutual defense and to come to help solve a particular problem. The Al Qaeda presence in Afghanistan. And to a very large extent, we did help America solve that. And there’s been no Afghanistan originated terror, very much less Afghanistan related terror on the streets of the west thanks to that effort.

Boris Johnson: (09:40)
What we’re seeing now is the end of that American, and therefore, that Western mission. It’s a big moment. I think it’s right that parliament should debate it. And other MPs will want to have their say. It’s also, of course, probably a logistically difficult moment of many MPs who would’ve made long standing commitment, Sam, but as you know, the wonders of Zoom technology are there. And if MPs cannot get in person into the House, then I’m sure they’ll be wanting to tune in and express their views. But the many MPs who have expertise in this matter will, I’m sure, want to… And there are a great many, and many who’ve actually served in Afghanistan who I’m sure will be wanting to get in and debate in person. Thank you.