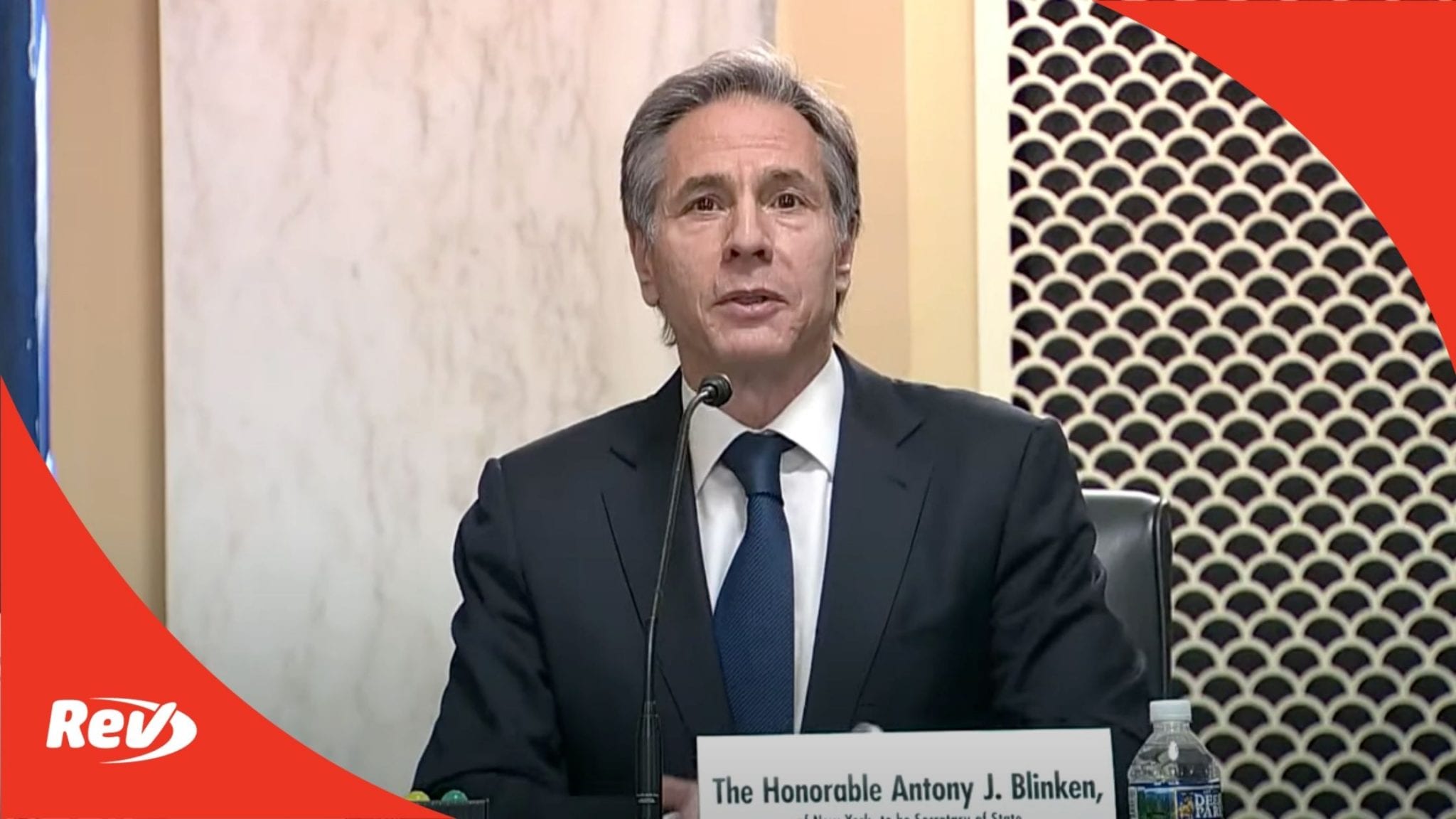 Antony Blinken: (00:00)
Mr. Chairman, thank you very much. And to you, to ranking member of Menendez, to all the members of this committee, thank you for the opportunity to be here today and I greatly appreciate everything you’ve done to make this hearing possible in this time. And I want to thank Senator Durbin essentially for his very kind introduction. It is truly the honor of a lifetime to appear before this committee as President-Elect Biden’s nominee to be Secretary of State. And it’s an honor that carries special significance for me for two reasons. First, as you’ve noted, I had the privilege of serving as the Democratic Staff Director of this committee for six years, working alongside distinguished group of senators, including several still on the committee today, to advance American diplomacy and safeguard the interests of the American people.

Antony Blinken: (00:52)
That experience gave me an abiding respect for this committee, for its finest bipartisan traditions, for the caliber of its members and staff, for the essential work it does to strengthen U.S. leadership around the world. If I have the honor of being confirmed, those lessons that I learned in my years with this committee will guide my approach to our work together. The second point of significance for me is a little bit more personal. In addition to my own confirmation as Deputy Secretary of State, this committee confirmed my wife, Evan Ryan, who is here with me today, as Assistant Secretary of State for Educational and Cultural Affairs, confirmed my uncle, Alan Blinken, as Ambassador to Belgium, and confirmed my father, Donald Blinken, as ambassador to Hungary. I hope I don’t break the streak today. My family, especially my wife and our children, John and Leila, is my greatest blessing. Our tradition of public service is a source of tremendous pride. I view that tradition as something of a sacred duty. Payment on the debt that our family owes to the nation that gave so many of my relatives refuge and extraordinary opportunities across the generations.

Antony Blinken: (02:14)
My grandfather, Maurice Blinken, found refuge in America after fleeing Russian pogroms. My father’s wife, Vera Blinken, found refuge in America after fleeing the communist regime in Hungary. And my late stepfather, Samuel Pisar, found refuge in America after enduring the horrors of the Holocaust. Sam was the only survivor among his immediate family and school of 900 children in Bialystock, Poland after four years in the concentration camp. At the end of the war, he made a break from a death march into the Bavarian woods, and from his hideout he heard the rumbling sound of a tank. And as he looked out, instead of seeing the dreaded iron cross, he saw a five pointed white star. And so he ran to the tank and got to it. The hatch opened. An African American GI looked down at him. He fell to his knees and said the only three words that he knew in the English language that his mother had taught him before the war, God bless America.

Antony Blinken: (03:21)
The GI lifted him into the tank, into freedom, into America. That’s who we are. That’s what we represent to the world however imperfectly, and what we can still be when we’re at our best. If I have the honor of serving as Secretary of State, that is the vision that I will pursue, a vision articulated often by President-Elect Biden, doubtlessly informed by his time on this committee when he said that the United States is a nation that leads not only by the example of our power, but by the power of our example. If confirmed three priorities would guide my time as Secretary of State. First, I will work with you to reinvigorate the Department of State investing in its greatest asset, the foreign service officers, the civil servants, the locally employed staff who animate American diplomacy. I know from firsthand experience their passion, their energy, their courage often far from home away from loved ones, sometimes in dangerous conditions, exacerbated now by the pandemic. They deserve our full support. If I’m confirmed as secretary, they will have it.

Antony Blinken: (04:39)
I’m committed to advancing our security and prosperity by building a diplomatic core that fully represents America in all its talent and in all its diversity, recruiting, retaining, promoting officers with the skills to contend with 21st century challenges, and who look like the country we represent, sparing no effort to ensure their safety and wellbeing, demanding accountability, starting with the Secretary of State, for building a more diverse, inclusive and non-partisan workforce. Second, working across government and with partners around the world, we will revitalize American diplomacy to deal with and take on the most pressing challenges of our time. We’ll show up again, day in, day out, whenever and wherever. Americans, prosperity and security is at stake. And we’ll engage the world, not as it was, but as it is. A world of rising nationalism, reseeding democracy, growing rivalry from China, and Russia and other authoritarian states, mounting threats to a stable and open international system, and a technological revolution that is reshaping every aspect of our lives, especially in cyberspace.

Antony Blinken: (06:02)
But for all that has changed, I believe some things remain constant. American leadership still matters. The reality is, the world simply does not organize itself. When we’re not engaged, when we’re not leading, then one of two things is likely to happen. Either some other country tries to take our place, but not in a way that’s likely to advance our interests and values, or maybe just as bad, no one does and then you have chaos. Either way, that does not serve the American people. I believe that humility and confidence should be the flip sides of America’s leadership coin. Humility because we have a great deal of work to do at home to enhance our standing abroad, and humility because most of the world’s problems are not about us in the first instance, even as they affect us. And no single country acting alone, even one as powerful as the United States, can fully and effectively address these problems. But we’ll also act with confidence, with the confidence that America at its best still has a greater ability than any country on earth to mobilize others for the common good.

Antony Blinken: (07:17)
Guided by these principles, I believe we can and we will overcome the COVID crisis, the greatest chair challenge since World War II. We can out-compete China and remind the world that a government of the people, for the people can deliver for its people. We can take on the existential threat posed by climate change. We can revitalize our core alliances, force multipliers of our influence around the world. Together we are far better positioned to counter threats from Russia, Iran, North Korea, and to stand up for democracy and human rights. And in everything we do around the world, I believe that we can and we must ensure that our foreign policy is actually working to deliver for American working families here at home.

Antony Blinken: (08:05)
Let me conclude, if I may, Mr. Chairman with a word about this institution whose resilience and determination are on full display in the aftermath of the senseless and searing violence in these halls. Both the President-Elect and I believe that we have to restore Congress’s traditional role as a partner in our foreign policy making. In recent years across administrations of both parties, Congress’s voice in foreign policy has been diluted and diminished. That doesn’t make the Executive Branch stronger, it makes our country weaker. President-Elect Biden believes, and I share his conviction, that no foreign policy can be sustained without the informed consent of the American people. You are the representatives of the American people. You provide that advice and consent. We can only tackle the most urgent challenges we have if we work together, and I’m dedicated to doing just that. And so if I’m confirmed, my commitment is to work with each and every one of you on behalf of all Americans.