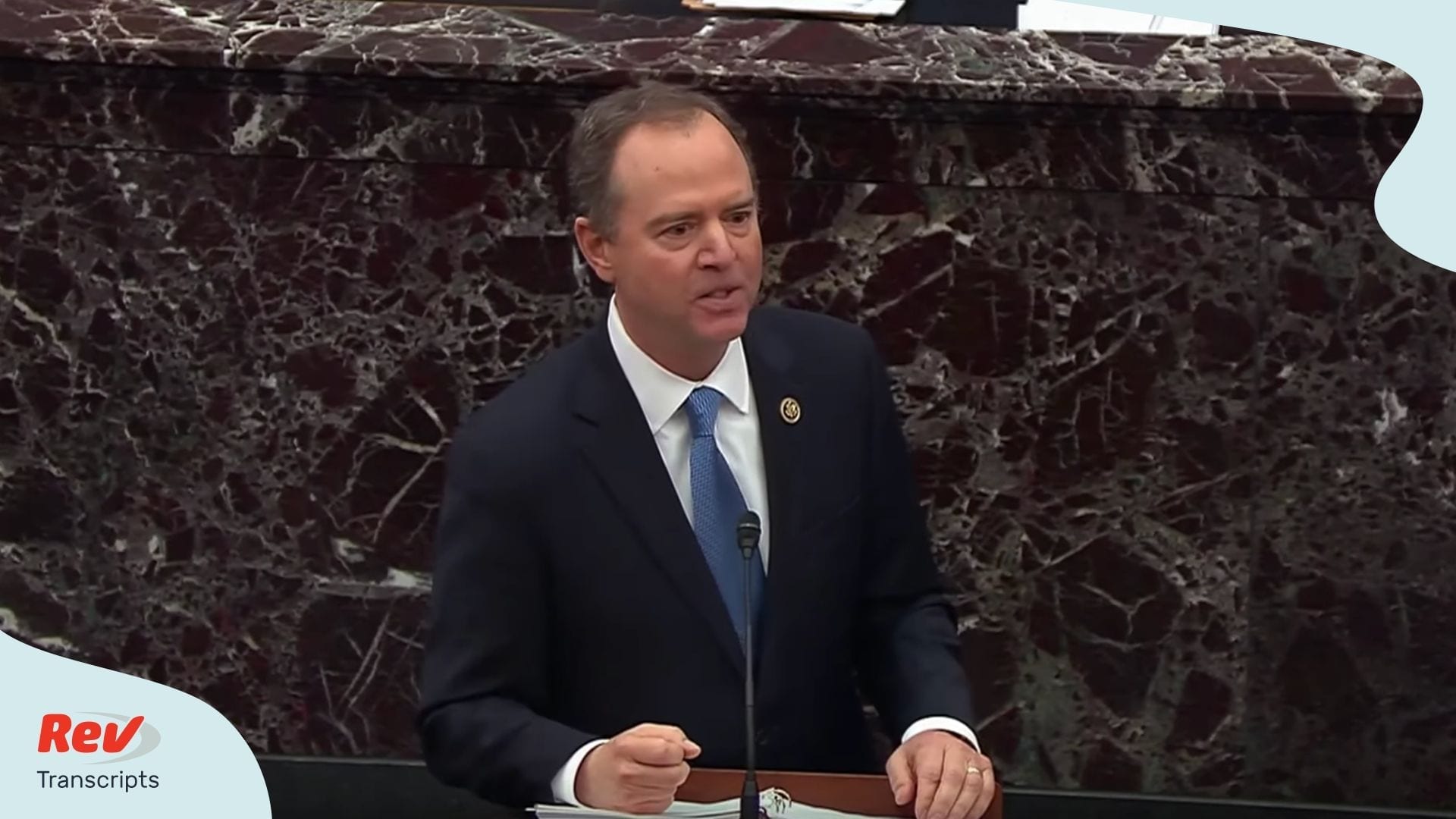 Adam Schiff delivered an emotional closing statement on Thursday, January 23, 2020 at the Donald Trump Impeachment trial in the Senate. He called Donald Trump “dangerous” and criticized him for listening to Rudy Giuliani over US intelligence agencies. Read the full transcript right here at Rev.com.

Adam Schiff: (02:49)
Because he wanted to and because what Rudy was offering him was something that would help him personally. And what Christopher Wray was offering him was merely the truth. What Christopher Wray was offering him was merely the information he needed to protect his country and its elections, but that’s not good enough. What’s in it for him? What’s in it for Donald Trump? This is why he needs to be removed. Now, you may be asking how much damage can he really do in the next several months until the election? A lot. A lot of damage. Now, we just saw last week, report that Russia tried to hack or maybe did hack Burisma. Okay. I don’t know if they got in. I’m trying to find out. My colleagues on the Intel committee, House and Senate, we’re trying to find out, did the Russians get in? What are the Russian plans and intentions? Well, let’s say they got in and let’s say they start dumping documents to interfere at the next election.

Adam Schiff: (05:00)
Now maybe you could have argued three years ago when he said, “Hey Russia, if you’re listening, hack Hillary’s emails.” Maybe you could give him a freebie and say he was joking, but now we know better. Hours after he did that Russia did, in fact, try to hack Hillary’s emails. There’s no Mulligan here when it comes to our national security. So what if China does overtly or covertly start to help the Trump campaign? You think he’s going to call them out on it or you think he’s going to give them a better trade deal on it? Can any of us really have the confidence that Donald Trump will put his personal interests ahead of the national interests? Is there really any evidence in this presidency that should give us the ironclad confidence that he would do so?

Adam Schiff: (07:14)
If the truth doesn’t matter, we’re lost. Framers couldn’t protect us from ourselves, if right and truth don’t matter. And you know that what he did was not right. That’s what they do in the old country, that Colonel Vindman’s father came from. Or the old country that my great grandfather came from, or the old countries that your ancestors came from, or maybe you came from. But here, right is supposed to matter. It’s what’s made us the greatest nation on earth. No constitution can protect us, right doesn’t matter any more. And you know you can’t trust this President to do what’s right for this country. You can trust he will do what’s right for Donald Trump. He’ll do it now. He’s done it before. He’ll do it for the next several months. He’ll do it in the election if he’s allowed to. This is why if you find him guilty, you must find that he should be removed. Because right matters. Because right matters and the truth matters. Otherwise, we are lost.