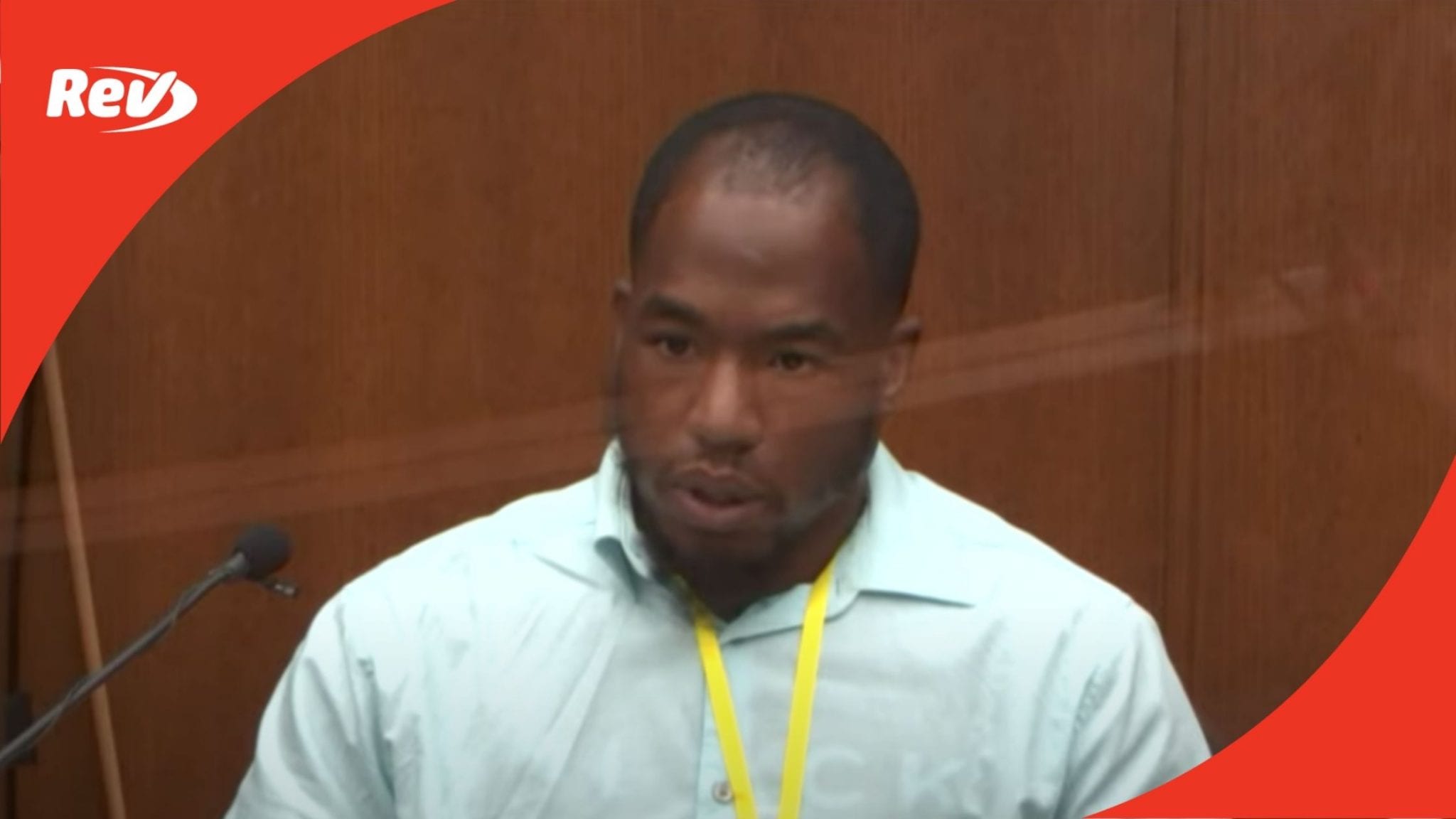 Witness Donald Williams testified during Derek Chauvin’s trial for the murder of George Floyd on March 30, 2021. He said he called 911 because he believed he “witnessed a murder.” Read the transcript of the full statement remarks here.

Donald Williams: (00:04)
That is correct. I did call the police on the police.

Donald Williams: (00:10)
Because I believe I witnessed a murder.

Donald Williams: (00:17)
Yeah, I felt the need to call the police on the police.

Donald Williams: (00:27)
I believe that they didn’t … We just didn’t have no connection. I spoke to them, but not on a connection of a human being relationship.

Donald Williams: (00:59)
Maybe seconds. Not too long after they retreated to the other side of the street, I proceeded to call the police.

Donald Williams: (01:18)
Can you please repeat that question?

Donald Williams: (01:30)
I will not say yes or no. I cannot remember at this moment.

Donald Williams: (02:07)
The officers are trying to definitely killing a citizen in front of a Chicago store. He just pretty much just killed this guy that wasn’t resisting arrest. He had his knee on the dude’s neck the whole time, officer 987. The men went and stopped breathing. He wasn’t resisting arrest or nothing. He was already in handcuffs. They pretty much … It’s stupid, dude. I don’t even know if he’s dead for sure, but he was not responsive when the ambulance came and got him. And the officer that was just out here left, the one that actually just murdered him in front of everybody on 38th and Chicago.

Donald Williams: (02:45)
Yeah. That was bogus, what they just did to this man. He was was unresponsive. He wasn’t resisting arrest, or any of it.

Donald Williams: (02:55)
Man, I’m sitting here, talking with another off duty firefighter that keeps saying they’re watching in front of us as well. She told him to check the man’s pulse, but they wouldn’t even check the pulse.

Speaker 6: (03:13)
You have reached the city of Minneapolis. To reach someone in our property crimes division-

Lawyer: (03:49)
Is that an accurate recording of the call you made?

Lawyer: (03:53)
And at the beginning you referred to officer 987. Where did you get that number from?

Donald Williams: (03:59)
Honestly, it was just visually popping in my head. I looked at his badge and that’s what I read on his badge.

Lawyer: (04:08)
So whose badge, which officer were you referring to?

Donald Williams: (04:11)
The officer sitting over there.

Lawyer: (04:14)
Was that also the officer that had his knee on George Floyd’s neck?

Lawyer: (04:18)
For the record, in your previous answer, you were pointing to the defendant, Mr. Chauvin?

Lawyer: (04:45)
And the response then was to transfer you to a sergeant, correct?

Lawyer: (05:15)
And the call ends abruptly. Did you hang up to terminate the call?

Donald Williams: (05:21)
I’m not 100% sure, but I may have be I felt threatened once our interaction happened in front of the store with me and Thao.

Lawyer: (05:31)
And then from there after hanging up, did you stick around for a while and talk to some other people there?