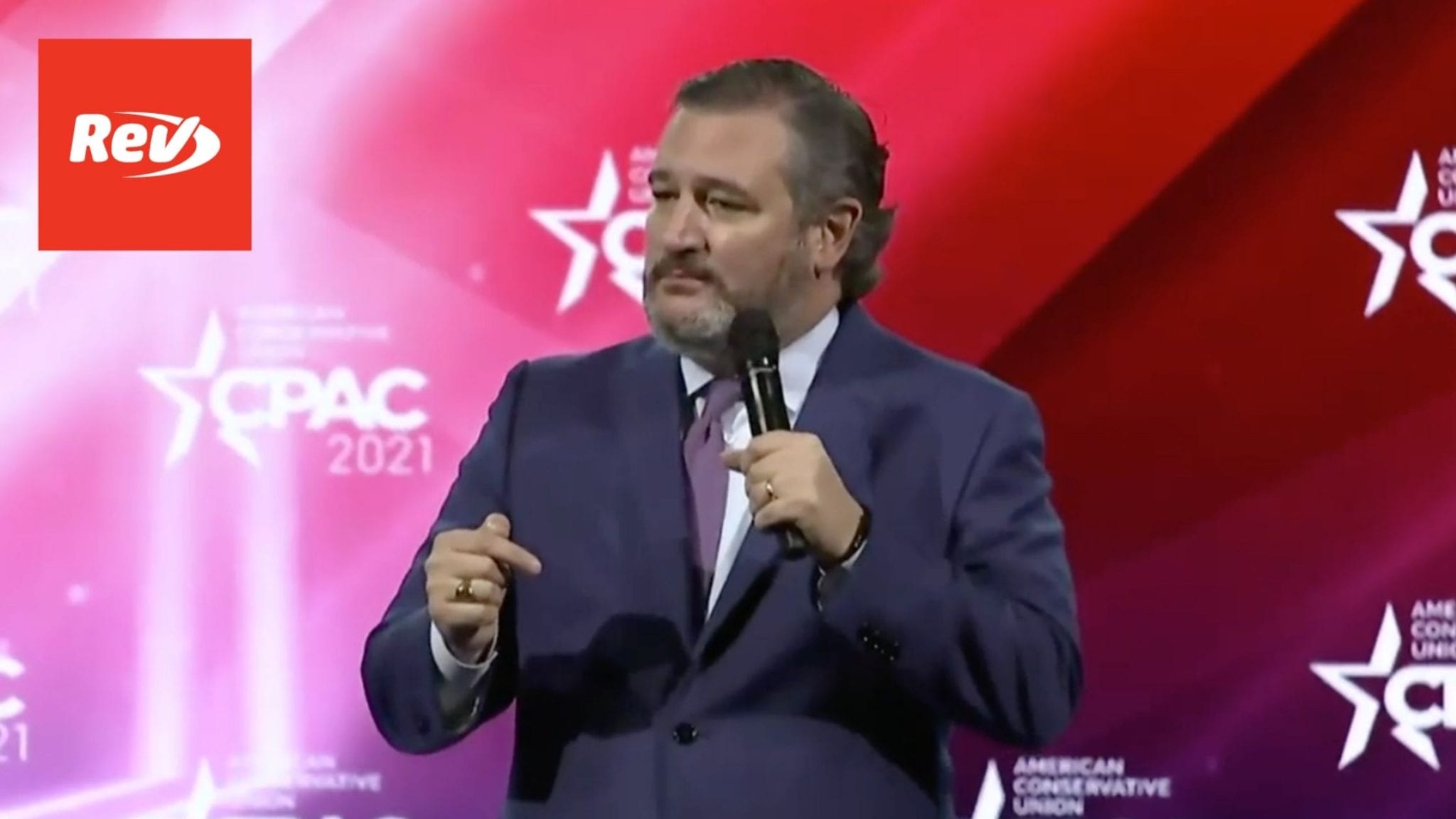 Ted Cruz: (00:08)
God bless CPAC. I got to say Orlando is awesome. It’s not as nice as Cancun, but it’s nice. And I got to say, what an amazing array of speakers here at CPAC. For a second there, I thought we were in Des Moines. That one took people a minute.

Ted Cruz: (02:05)
Listen to William Wallace, and let me tell you, the media here looks at the men and women gathered here, at the young people gathered here, as dangerous radicals. This is the Rebel Alliance and Vader and the emperor, and let’s be clear, they’re not your father, are terrified of the rebels who are here. And I’m proud to tell you, Gina Carano is standing with us.

Ted Cruz: (02:58)
So what do we do? What do we do at a time where the hard left is resurgent. Two very simple things, number one, we defend liberty. Look, are there tensions in our party? Sure. Because we believe in diversity, we believe in individuality, different people have different views. We aren’t the Borg enforcing… Okay, I may have committed a cardinal sin, mixing Star Wars and Star Trek. Next thing you know, you’re going to cross the streams and the Stay Puft Marshmallow Man is going to come. Too many terrible references there. We don’t believe in uniformity. But I’ll tell you what can unite conservatives and libertarians and those who value the Constitution and the Bill of Rights is a love of liberty.

Ted Cruz: (03:53)
And the left, they tell you who they are, particularly in a global pandemic. As Rahm Emanuel said, “You never want to waste a good crisis.” And, who, boy, these guys don’t want to waste it. You see statists in California putting 37 tons of sand in a skate park because ain’t nobody having fun while the socialists are in charge. We see Bill de Blasio in New York sending people in to shut down parks and to throw young Orthodox Jewish kids out of the parks because God forbid children have fun.

Ted Cruz: (04:40)
We see leftists across the country shutting down churches. California, they’ve helpfully explained, you can go out and protest. You can scream and yell, “Abolish the police,” and this virus magically, no one will get infected. You can French kiss the guy next to you yelling, “Abolish the police,” and no one will get infected. But if you go to church and say, “Amazing grace,” everyone’s going to die.

Ted Cruz: (06:03)
Remember, this is all about science. It’s actually, it may not be elevation. I think it’s that there are hormones that are released in your thighs when you’re sitting, so you can sit at the table and there’s no virus being transmitted, but if you stand up, put the mask on.

Ted Cruz: (06:24)
And listen, let’s be clear, this is a dangerous virus. But these collectivist statists, okay, now they’re saying, “Everybody can get immunized. We can have herd immunity everywhere, and we’re going to wear masks for the next 300 years.” And by the way, not just one mask, two, three, four, you can’t have too many masks. How much virtue do you want to signal? This is just dumb.

Ted Cruz: (07:04)
The US Capitol has giant fences with razor wires and 5,000 National Guard standing out front because the Democrats are convinced that political theater helps them. Let’s be clear, this is not about security at this point. This is about political theater. Half the country, the deplorables, are dangerous, and they’re going to turn the Capitol into a military outpost in Baghdad just to have their compliant media echo that message. But do you know what terrifies every one of these statists? The truth. Liberty’s powerful, liberty’s persuasive, liberty is fun.

Ted Cruz: (08:58)
And let me tell you, right now in Los Angeles, there’s some skater kid who’s 19, who’s told that it’s hip and chic and cool to be a leftist socialist, man who’s going to hear a message, wait a second, these guys don’t want me to speak, think, have fun, do what I want to do.

Ted Cruz: (09:24)
The message of liberty is profoundly subversive. The left believes in rigid conformity. We believe in diversity, free speech. You can say whatever you want no matter how dumb it is. And by the way, in Washington DC, we test that proposition. Religious liberty, you can worship however you like on your knees before Almighty God or you could worship the almighty dollar or you can worship, I don’t know, pink martians. That’s the beauty of freedom.

Ted Cruz: (10:10)
The Second Amendment, oh, the left hates the Second Amendment because they want their people docile and compliant. When we saw riots all across the country, I remember there were reports that riots were going to come into… Mostly peaceful, fiery, but mostly peaceful. There were reports, riots were going to come into the suburbs. I got to tell you, in Houston, where I live, there weren’t any rioters.

Ted Cruz: (10:42)
Because, let’s be very clear, if there had been, they would discover what the state of Texas thinks about the Second Amendment right to keep and bear arms.

Ted Cruz: (10:49)
So defend liberty, but number two, have fun. Have fun. So many on the right, they act like they got a stick inserted somewhere it doesn’t belong. Just lighten up. Especially now, the left, they are shrill. They are angry. How many leftists does it take to screw in a light bulb? “That’s not funny!” God bless, who would want to be around these people? Jerry Seinfeld doesn’t tell comedy anymore because any joke that’s funny is canceled. SNL is unwatchable. The late night comedy, they stand up and say, “We hate Donald Trump.” Yeah, no kidding. We didn’t get that the last 9,000 times you told that.

Ted Cruz: (12:05)
In 2020, the New York Times reported that 60% of women named Karen voted for Joe Biden. That’s actually real. You can look it up, the fact checkers. That’s what the New York Times reported. And I’m willing to bet 80% of the men named Karen voted for Joe Biden. Just have fun. Yesterday, John Boehner made some news. He suggested that I do something that was anatomically impossible. To which my response was, “Who’s John Boehner?”

Ted Cruz: (13:04)
And you know what? There are a whole lot of voices in Washington that want to just erase the last four years, want to go back to the world before, where we had government of the lobbyist by the lobbyists for the lobbyists, where the Republicans’ compelling message was, “Republicans, we waste less.” And they look at Donald J. Trump, and they look at the millions of millions of people inspired who went to battle fighting alongside President Trump, and they’re terrified. And they want him to go away. Let me tell you this right now, Donald J. Trump ain’t going anywhere.

Ted Cruz: (15:18)
But you know what? You have the same platform. You have social media. You have your friends, your neighbors, your family, your classmates. Speak out for freedom. Because I’m going to close with these words of encouragement, these are dark days and the media tells us this is the new Galactic Empire forever and 1,000 years.

Ted Cruz: (15:47)
But already Joe Biden and the radicals in his administration, they are already overshooting. They are already going too far. Their policies don’t work. They are disasters. They are bad. They are destroying jobs. They’re stripping our freedom. And there is a natural pendulum to politics, and the country will come back to sanity. And mark my words, 2022 is going to be a fantastic election year, and so is 2024, as we stand together and defend liberty, defend the Constitution, defend the Bill of Rights of every American. In the immortal words of William Wallace, “Freedom!”