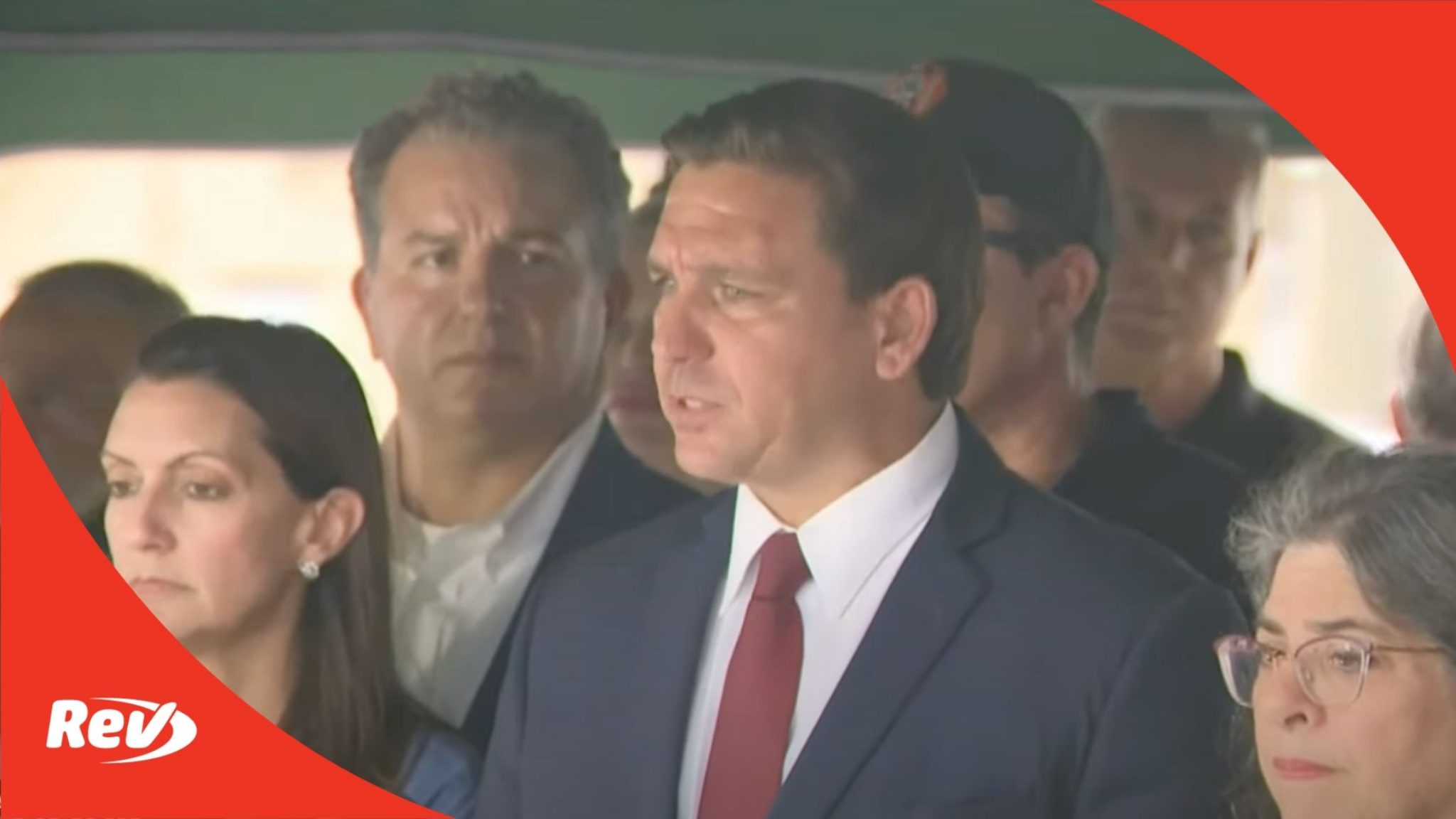 Ron DeSantis: (13:57)
Well, good afternoon. We all woke up in the early morning hours to see these really tragic scenes of a collapsed condominium complex, but I just want to give credit to the search and fire department, the first responders, Miami-Dade County. They were on that scene before we knew whether there’d be more collapsed. We didn’t know whether the building had any structural integrity and they were shepherding people to safety and they absolutely save people’s lives and so we really appreciate all that they have done and that they’re continuing to do.

Ron DeSantis: (14:32)
I had an opportunity to meet with Mayor Cava and her team, as well as the mayor of Surfside and we just toured around the complex to be able to see, and the TV doesn’t do it justice. I mean, it is really, really traumatic to see the collapse of massive structure like that. Right now, we have the fire rescue. They are in search and rescue mode.

Ron DeSantis: (14:58)
…and to identify survivors. I know they have made contact with some and they’re doing everything they can to save lives and that is ongoing and they’re not going to rest. Thankful for what they’re doing. We were just over there, got to thank some of the folks who just had a change of shift, but they’ve really stepped up.

Ron DeSantis: (15:16)
We’re also making sure that the people that have been displaced have a place to go. We’re going to be visiting the center up further north on Collins Avenue after this. But we are happy to report that through the help of the Red Cross, we have short-term hotels set up for these folks. Then obviously we’re going to work with the city and the county, state to make sure that there’s any longer-term needs that we can be helpful in any way we can.

Ron DeSantis: (16:03)
It’s a tragic day. Some of those folks who were able to go from safety, we thank the fire and rescue for what they did to be able to put themselves on the line to help other folks. They’re still hard at work. We still have hope to be able to identify additional survivors and the state of Florida, we’re offering any assistance that we can. We’ve done some with the Florida Department of Transportation. Miami-Dade has got a great team, and so they’ve got a lot of resources that they’re bringing to bear, but we’re standing by to help in any way we can.

Ron DeSantis: (16:35)
I’m going to introduce our director of emergency management, Kevin Guthrie. He’s going to say a few words. We’re also going to hear from Mayor Cava, and then I think, Mayor, yeah, you’re going to hear from the mayor of Surfside as well. Kevin?

Kevin Guthrie: (16:47)
All right. Good afternoon. Kevin Guthrie with the Florida division of emergency management. Just to give you an update on what’s going on with state resources, we do have members of the state emergency response team that have been activated and are working this event. They include members from, obviously, the chief financial officer’s office with the state fire Marshall and the ESF-16. That includes individuals from the Florida department of law enforcement and our law enforcement resources from ESF-16. It also includes our ESF-8 health and medical, as well as our DOT partners. I know Director Dane Eagle is here as well with DEO.

Kevin Guthrie: (17:25)
We’ve got about five different state agencies involved right now that are assisting local, county and city government on responding to this event. Right now, the biggest asset that has been asked for is traffic control devices from DOT, and DOT is filling those resources right now. Again, we will be here as long as we need to be to continue to assist the local, county and municipal government with the needs that they have of this. Thank you.

Mayor Levine Cava: (17:54)
This is the incredible, unimaginable situation that none of us could have predicted, but we have the right people on the job. Our team at Miami-Dade Fire Rescue has dealt with collapsed situations before, their dogs are trained. They have been on the scene since they got the call at 1:38 this morning, and they are doing a fantastic job. They were able to rescue so many from the buildings, the intact building, the collapsed building, and really in incredible that at this time we’ve only identified one person as having passed. We are very, very hopeful. We’ll continue the search and rescue operation. We’ve also evacuated the two side buildings and we’re working with Red Cross, with our own social service agency, our police and fire departments to make sure that those people are properly situated.

Mayor Levine Cava: (18:48)
The leadership here of the city mayor has been phenomenal. He’s been on the scene since early this morning, as well as neighboring mayors. They’ve all come to help them with their police departments, with their own moral support and presence.

Mayor Levine Cava: (19:03)
Also, this is a predominantly a Jewish community, and we’ve had the rabbis and chaplains on hand. The operation that we’ll be visiting shortly, the community center, people are getting the support that they need. Not only are they getting hotel rooms, they’re getting help with their medicines, with blankets, with clothing, because, of course, there they are with nothing. They were evacuated in the night.

Mayor Levine Cava: (21:20)
We’re really grateful everyone’s come together, and we’re going to continue our efforts here. Thank you so very much.

Charles Burkett: (21:29)
Thank you. Thank you, Mayor Cava, Governor DeSantis. Little Surfside has experienced a catastrophe with respect to this building. I woke up this morning at 2:00 and came out to the property and it was something like I could never believe could happen. It was a complete collapse of the building. I thought maybe a balcony had gone down, but we’ve got 134 units in that building, I understand, and literally half of that building is not there anymore. We’re working hard. There’s not a lot that little Surfside can do except ring the alarm bell. We rang the alarm bell and Mayor Cava sent the calvary, as did the governor. That has made all the difference in the world. They’ve got resources like you can’t believe here. We’ve got the dogs, we’ve got the equipment and we’re going to do our very best to save as many people in that pile of rubble as we possibly can. Thank you, Mayor. Thank you, Governor. Thank you.

Speaker 18: (23:58)
Could you tell us how many people are still missing? Governor? Governor?