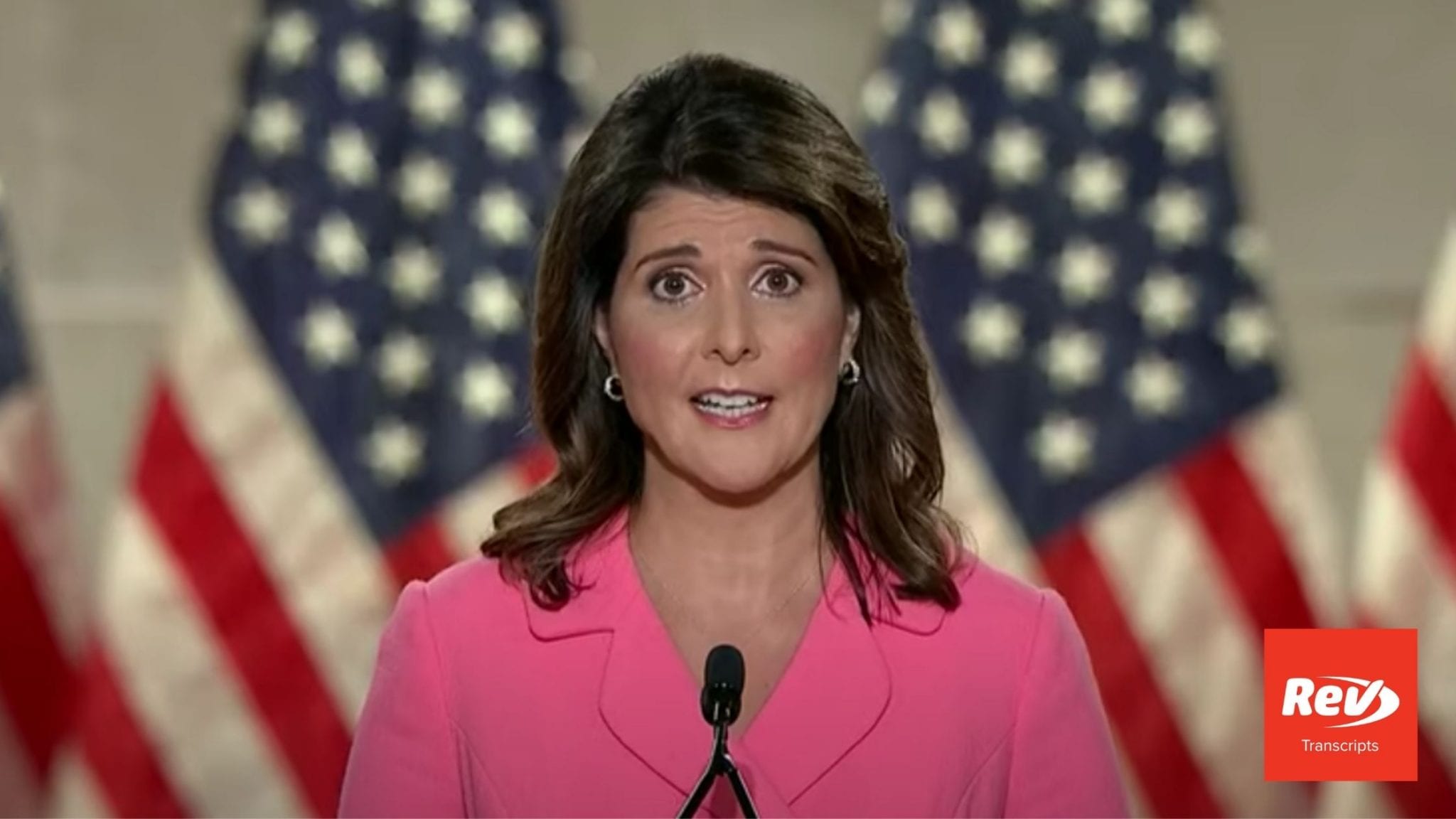 Nikki Haley: (00:08)
Good evening. I’m Nikki Haley, and it’s great to be back at the Republican National Convention. I’ll start with the little story. It’s about an American ambassador to the United Nations, and it’s about a speech she gave to this convention. She called for the reelection of the Republican president she served, and she called out his democratic opponent, a former vice president from a failed administration.

Nikki Haley: (00:38)
That ambassador said, and I quote, “Democrats always blame America first.” The year was 1984, the president was Ronald Reagan and ambassador Jean Kirkpatrick’s words are just as true today. Joe Biden and the Democrats are still blaming America first. Donald Trump has always put America first, and he has earned four more years as president. It was an honor of a lifetime to serve as the United States ambassador to the United nations. Now the UN is not for the faint of heart. It’s a place where dictators, murderers and thieves denounce America, and then put their hands out and demand that we pay their bills.

Nikki Haley: (01:31)
Well, president Trump put an end to all of that. With his leadership, we did what Barack Obama and Joe Biden refused to do. We stood up for America and we stood against our enemies. Obama and Biden let North Korea threaten America. President Trump rejected that weakness, and we passed the toughest sanctions on North Korea in history. Obama and Biden let Iran get away with murder and literally sent them a plane full of cash.

Nikki Haley: (02:04)
President Trump did the right thing and ripped up the Iran nuclear deal. Obama and Biden led the United nations to denounce our friend and ally, Israel. President Trump moved our embassy to Jerusalem, and when the UN tried to condemn us, I was proud to cast the American veto. This president has a record of strength and success. The former vice president has a record of weakness and failure. Joe Biden is good for Iran and ISIS, great for communist China. And he’s a godsend to everyone who wants America to apologize, abstain and abandon our values.

Nikki Haley: (02:47)
Donald Trump takes a different approach. He’s tough on China, and he took on ISIS and won, and he tells the world what it needs to hear. At home, the president is the clear choice on jobs in the economy. He’s moved America forward, while Joe Biden has held America back. When Joe was VP, I was governor of the great state of South Carolina. We had a pretty good run, manufacturers of all kinds flock to our state from overseas, creating tens of thousands of American jobs.

Nikki Haley: (03:25)
People were referring to South Carolina as the beast of the Southeast, which I loved. Everything we did happened in spite of Joe Biden and his old boss. We cut taxes, they raised them. We slashed red tape, they piled on more mandates. And when we brought in good paying jobs, Biden and Obama sued us. I fought back and they gave up.

Nikki Haley: (03:55)
A Biden-Harris administration would be much, much worse. Last time, Joe’s boss was Obama. This time it would be Pelosi, Sanders and the squad. Their vision for America is socialism. And we know that socialism has failed everywhere. They want to tell Americans how to live, what to think, they want a government takeover of healthcare. They want to ban fracking and kill millions of jobs. They want massive tax hikes on working families. Joe Biden, and the socialist left would be a disaster for our economy. But president Trump is leading a new era of opportunity.

Nikki Haley: (04:40)
Before communist China gave us the coronavirus, we were breaking economic records left and right, the pandemic has set us back, but not for long president. Trump brought our economy back before and he will bring it back again. There’s one more important area where I president is right. He knows that political correctness and cancel culture are dangerous and just plain wrong. In much of the Democratic party, it’s now fashionable to say that America is racist. That is a lie.

Nikki Haley: (05:20)
America is not a racist country. This is personal for me. I am the proud daughter of Indian immigrants. They came to America and settled in a small Southern town. My father wore a turban, my mother wore a saree. I was a brown girl in a black and white world. We faced discrimination and hardship, but my parents never gave in to grievance and hate. My mom built a successful business. My dad taught 30 years at a Historically Black College, and the people of South Carolina chose me as their first minority and first female governor.

Nikki Haley: (06:04)
America is a story that’s a work in progress. Now is the time to build on that progress and make America even freer, fairer, and better for everyone. That’s why it’s so tragic to see so much of the Democratic party, turning a blind eye towards riots and rage. The American people know we can do better. And of course we value and respect every black life. The black cops who’ve been shot in the line of duty, they matter.

Nikki Haley: (06:35)
The black, small business owners who’ve watched their life’s work go up and flames, they matter. The black kids who’ve been gunned down on the playground, their lives matter too. And their lives are being ruined and stolen by the violence on our streets. It doesn’t have to be like this. It wasn’t like this in South Carolina, five years ago. Our state came face to face with evil: a white supremacist walked into Mother Emmanuel Church during Bible study. 12 African-Americans pulled up a chair and prayed with him for an hour. Then he began to shoot. After that horrific tragedy, we didn’t turn against each other.

Nikki Haley: (07:26)
We came together, black and white, Democrat and Republican. Together, we made the hard choices needed to heal and removed a divisive symbol peacefully and respectfully. What happened then should give us hope now. America, isn’t perfect, but the principles we hold dear are perfect. If there’s one thing I’ve learned, it’s that even on our worst day, we are blessed to live in America. It’s time to keep that blessing alive for the next generation.

Nikki Haley: (08:01)
This president and this party are committed to that noble task. We seek a nation that rises together, not falls apart in anarchy and anger. We know that the only way to overcome America’s challenges is to embrace America’s strengths. We are striving to reach a brighter future, where every child goes to a world-class school chosen by their parents. Where every family lives in a safe community with good jobs, where every entrepreneur has the freedom to achieve and inspire. Where every believer can worship without fear, and every life is protected. Where every girl and boy, every woman and man of every race and religion has the best shot at the best shot at the best life.

Nikki Haley: (08:51)
In this election, we must choose the only candidate who has and who will continue delivering on that vision. President Trump and Vice President Pence have my support and America has our promise. We will build on the progress of our past and unlock the promise of our future. That future starts when the American people reelect president Donald Trump. Thank you, good night, and may God always bless America.