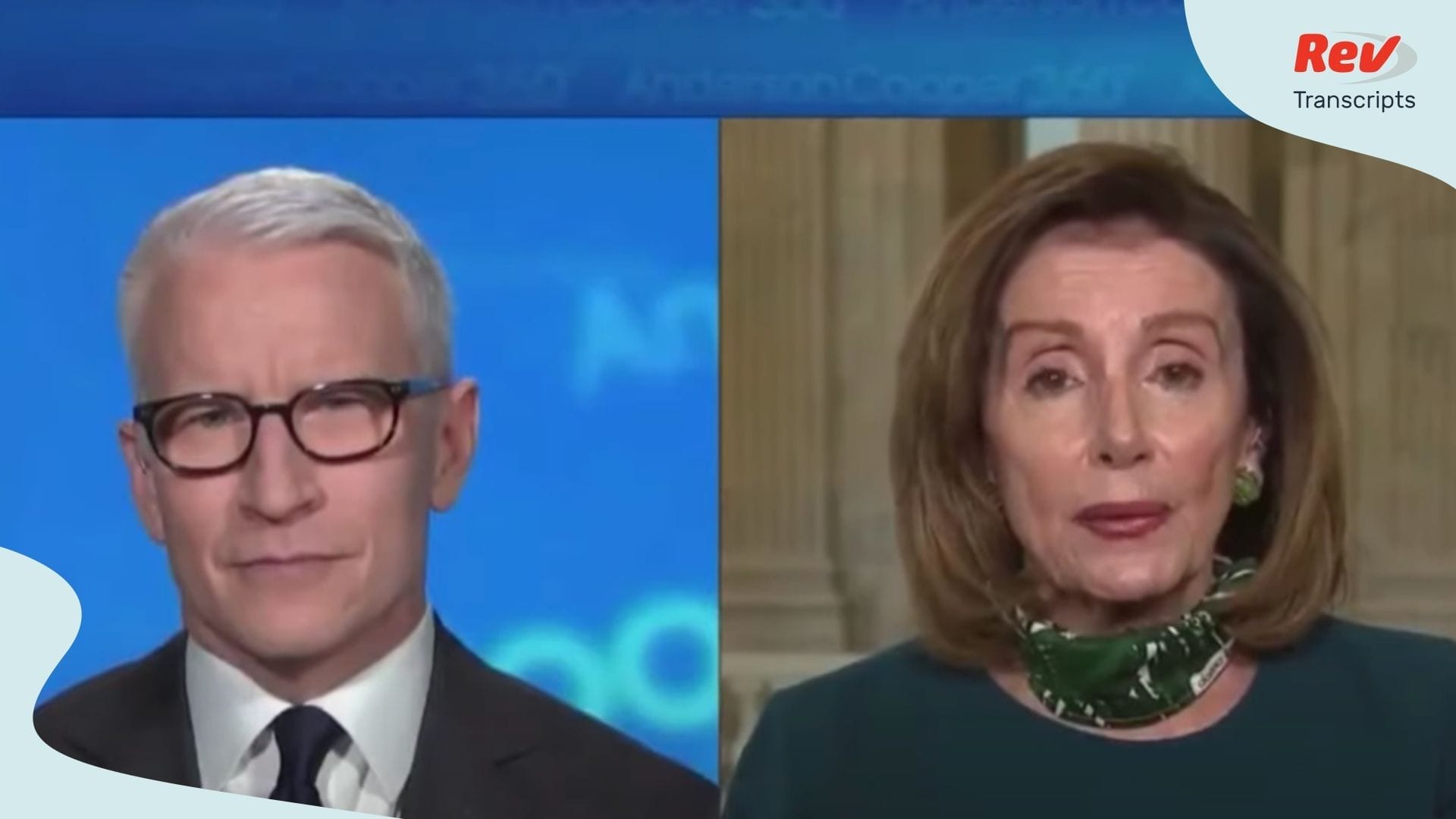 Nancy Pelosi called Donald Trump “morbidly obese” in an interview May 18 with Anderson Cooper. She said that a man of his age and condition should not be taking unapproved medications. Trump said earlier in the say that he takes hydroxychloroquine to prevent COVID-19.

Nancy Pelosi: (00:00)
As far as the president is concerned, he’s our president; and I would rather he not be taking something that has not been approved by the scientists, especially in his age group and his, shall we say weight group, what is ‘morbidly obese’ they say. I think it’s not a good idea.

Anderson Cooper: (00:25)
In terms of the State Department inspector general’s firing, I’ve read the letter that you sent to President Trump asking for an explanation. The House Foreign Affairs chairman is launching, I know, a probe into this. And you said yesterday that the firing looks like it’s retaliation, that could be unlawful. What would happen then?

Nancy Pelosi: (00:43)
Well, the fact is, is that the president should acknowledge why we even have inspectors general. This followed Watergate to have transparency, accountability; to fight waste, fraud, abuse in our governmental actions. While the law by the president is correct in saying he can fire anyone he wants, when it comes to inspectors general, he has a responsibility to inform Congress first. But it is also essential when he says, “He has lost my confidence,” to tell us why he has lost his confidence. This is the fourth inspector general that the president has “lost confidence in”, so to speak, and it’s a pattern that I think is unhealthy for a democracy.

Anderson Cooper: (01:32)
He is now said publicly, the president, that he doesn’t know anything about this person. That he was asked to do this by the secretary of state. And that when he heard that he was appointed by President Obama, that seemed to be reason enough for the president. Secretary Pompeo says he asked for the inspector general to be fired because he was “undermining the State Department.”

Anderson Cooper: (01:52)
And I know in addition to the IG investigating whether Pompeo made a staffer perform a variety of personal errands, Pompeo refused to cooperate, we’re learning, with the IG’s probe into the Saudi arms sales, which you also indicated in your letter. Do you have confidence in Secretary Pompeo right now?

Nancy Pelosi: (02:12)
Well, the fact is, is that they declared an emergency almost a year ago as the basis for why they needed to have the arms sales to the Emirates and to Saudi Arabia. It wasn’t appropriate.

Nancy Pelosi: (02:26)
Right now, they’re having another advising us of something that they’re giving over $5 million worth of ventilators to Russia. Russia can very well afford to pay for those ventilators, so they just a wheel and deal in a way that is not appropriate. And I wouldn’t put up with it with a democratic president or a Republican president.

Nancy Pelosi: (02:46)
But that arms sale, by declaring a fake emergency in order to just go forward without the accountability and transparency that our government really thrives on, is something that is worthy of attention. And perhaps, and I don’t know for sure, I just said in my letter that it has been reported in the press that it was about the Saudi arms sale.

Anderson Cooper: (03:15)
The House has narrowly passed more funding for people, more of a bailout. And I’m wondering, the Senate, clearly, it’s likely to fail in the Senate. The president has threatened to veto it. What is the next step for that? I mean, is this done?

Nancy Pelosi: (04:03)
All three of these things have been supported by the Republicans. We wrote a bill that was based on initiatives that they have supported, and that we have both supported in a bipartisan way. We do have some areas of disagreement and those are cause for negotiation, but I don’t think there’s any question that what this country needs is a robust testing initiative with a plan, a timetable, benchmarks, milestones, to get the job done.

Nancy Pelosi: (04:35)
That our states and localities are going to have to either raise taxes, cut services, or both, unless they have an infusion of cash for the purpose of having to defray the cost of corona already, the coronavirus cost, as well as the lost revenue because of corona. I have no doubt that they will come to the table.

Anderson Cooper: (04:59)
Speaker Pelosi, I appreciate your time. Thank you.

Nancy Pelosi: (05:02)
Thank you. My pleasure. Congratulations again on precious Wyatt. Thank you.

Anderson Cooper: (05:07)
Up next, we remember some of those whose lives have been lost in the coronavirus pandemic, a New York City EMT and a couple of married for more than 70 years. We’ll be right back.