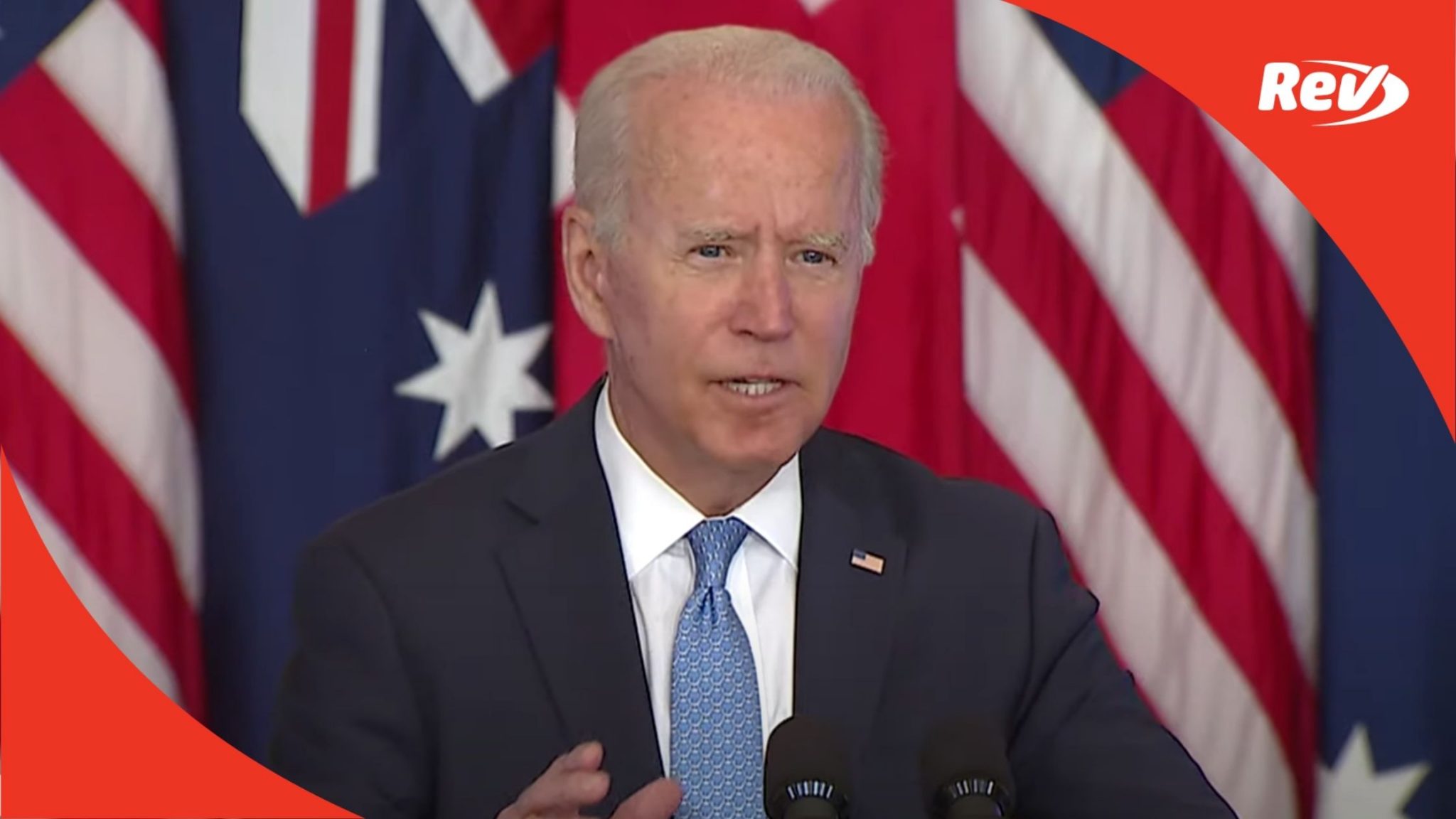 Scott Morrison: (00:00)
… and Biden. Today, we join our nations in a next generation partnership, built on a strong foundation of proven trust. We have always seen the world through a similar lens. We have always believed in a world that favors freedom, that respects human dignity, the rule of law, the independence of sovereign states and the peaceful fellowship of nations. And while we have always looked to each other to do what we believe is right, we have never laughed at each other, always together, never alone.

Scott Morrison: (00:32)
Our world is becoming more complex, especially here in our region, the Indo-Pacific, this affects us all. The future of the Indo-Pacific will impact all our futures. To meet these challenges, to help deliver the security and stability our region needs, we must now take our partnership to a new level, a partnership that seeks to engage, not to exclude, to contribute, not take, and to enable and empower, not to control or coerce.

Scott Morrison: (01:06)
And so friends AUKUS is born, a new enhanced trilateral security partnership between Australia, the United Kingdom and the United States, AUKUS, a partnership where our technology, our scientists, our industry, our defense forces are all working together to deliver a safer and more secure region that ultimately benefits all.

Scott Morrison: (01:31)
AUKUS will also enhance our contribution to our growing network of partnerships in the Indo-Pacific region. ANZUS, our ASEAN friends, our bilateral strategic partners, the Quad, Five Eyes countries, and of course our dear Pacific family, the first major initiative of AUKUS will be to deliver a nuclear powered submarine fleet for Australia.

Scott Morrison: (01:54)
Over the next 18 months, we will work together to seek to determine the best way forward to achieve this. This will include an intense examination of what we need to do to exercise our nuclear stewardship responsibilities here in Australia. We intend to build these submarines in Adelaide, Australia, in close cooperation with the United Kingdom and the United States.

Scott Morrison: (02:19)
But let me be clear, Australia is not seeking to acquire nuclear weapons or establish a civil nuclear capability. And we will continue to meet all our nuclear non-proliferation obligations.

Scott Morrison: (02:33)
Australia has a long history of defense cooperation with the United States and the United Kingdom. For more than a century, we have stood together for the cause of peace and freedom, motivated by the beliefs we share, sustained by the bonds of friendship we have forged, enabled by the sacrifice of those who have gone before us, and inspired by our shared hope for those who will follow us. And so today friends, we recommit ourselves to this cause, and a new AUKUS vision.

Boris Johnson: (03:10)
… to Morrison, to announce that the United Kingdom, Australia, and the United States are creating a new trilateral defense partnership known as AUKUS, with the aim of working hand-in-glove to preserve security and stability in the Indo-Pacific.

Boris Johnson: (03:29)
We’re opening a new chapter in our friendship. And the first task of this partnership will be to help Australia acquire a fleet of nuclear powered submarines, emphasizing of course, that the submarines in question will be powered by nuclear reactors, not armed with nuclear weapons, and our work will be fully in line with our non-proliferation obligations.

Boris Johnson: (03:55)
This will be one of the most complex and technically demanding projects in the world, lasting for decades and requiring the most advanced technology. It will draw on the expertise that the UK has acquired over generations dating back to the launch of the Royal Navy’s first nuclear submarine over 60 years ago.

Boris Johnson: (04:19)
And together with the other opportunities from AUKUS, creating hundreds of highly skilled jobs across the United Kingdom, including in Scotland, the north of England, and the Midlands, taking forward this government’s driving purpose of leveling up across the whole country.

Boris Johnson: (04:38)
We will have a new opportunity to reinforce Britain’s place at the leading edge of science and technology, strengthening our national expertise, and perhaps most significantly, the UK, Australia, and the US will be joined even more closely together, reflecting the measure of trust between us, the depth of our friendship, and the enduring strength of our shared values of freedom and democracy.

Boris Johnson: (05:12)
Only a handful of countries possess nuclear powered submarines, and it is a momentous decision for any nation to acquire this formidable capability, and perhaps equally momentous for any other state to come to its aid. But Australia is one of our oldest friends, a kindred nation, and a fellow democracy and a natural partner in this enterprise. Now the UK will embark on this project alongside our allies, making the world safer and generating jobs across our United Kingdom. Thank you, over to you, Mr. President.

Joe Biden: (05:56)
Thank you, Boris. And I want to thank that fellow down under, thank you very much pal, appreciate it Mr. Prime Minister.

Joe Biden: (06:07)
I’m honored today to be joined by two of America’s closest allies, Australia and the United Kingdom, to launch a new phase of the trilateral security cooperation among our country. As Prime Minister Morrison and Prime Minister Johnson said, I want to thank you for this partnership, your vision as we embark together on this strategic mission.

Joe Biden: (06:27)
Although Australia, the UK, and US partnership, AUKUS, it sounds strange and all these acronyms, but it’s a good one, AUKUS, our nations will update and enhance our shared ability to take on the threats of the 21st century, just as we did in the 20th century. Together, our nations and our brave fighting forces have stood shoulder to shoulder for literally more than 100 years through the trench fighting in World War I, the island hopping in World War II, during the frigid winners in Korea, and the scorching heat of the Persian Gulf, the United States, Australia and the United Kingdom have long been faithful and capable partners, and we’re even closer today.

Joe Biden: (07:10)
Today, we’re taking another historic step to deepen and formalize cooperation among all three of our nations, because we all recognize the imperative of ensuring peace and stability in the Indo-Pacific over the long term. We need to be able to address both the current strategic environment in the region and how it may evolve because the future of each of our nations, and indeed the world, depends on a free and open Indo-Pacific enduring and flourishing in the decades ahead.

Joe Biden: (07:42)
This is about investing in our greatest source of strength, our alliances, and updating them to better meet the threats of today and tomorrow. It’s about connecting America’s existing allies and partners in new ways, and amplifying our ability to collaborate recognizing there is no regional divide separating the interests of our Atlantic and Pacific partners.

Joe Biden: (08:07)
Indeed, this effort reflects the broader trend of key European countries playing an extremely important role in the Indo-Pacific. France in particular already has substantial Indo-Pacific presence, and is a key partner and ally in strengthening the security and prosperity of the region. The United States looks forward to working closely with France and other key countries as we go forward.

Joe Biden: (08:31)
And finally, this initiative is about making sure that each of us has a modern capability, the most modern capabilities we need to maneuver and defend against rapidly evolving threats.

Joe Biden: (08:45)
AUKUS will bring together our sailors, our scientists, and our industries to maintain and expand our edge in military capabilities and critical technologies such as cyber, artificial intelligence, quantum technologies, and undersea domains.

Joe Biden: (09:36)
I have asked Secretary Austin of the Department of Defense to lead this effort for the US government. In close collaboration with the Department of Energy and the Department of State our governments will now launch an 18 month consultation period to determine every element of this program, from workforce, to training requirements, to production timelines, to safeguards, and non-proliferation measures, and to nuclear stewardship and safety to ensure full compliance with each of our nation’s commitments under The Nuclear Non-Proliferation Treaty.

Joe Biden: (10:11)
We’ll all undertake this effort in a way that reflects the longstanding leadership in global non-proliferation and rigorous verification standards, in partnership and consultation with the International Atomic Energy Agency.

Joe Biden: (10:25)
So I want to thank the Prime Minister, Prime Minister Morrison, and Prime Minister Johnson, for their friendship, but mostly important for their leadership and partnership as we undertake this new phase of our security cooperation.

Joe Biden: (10:38)
And the United States will also continue to work with ASEAN and the Quad as was stated earlier, our five treaty allies and other close partners in the Indo-Pacific, as well as allies and partners in Europe and around the world to maintain a free and open Indo-Pacific, and build a future of peace, opportunity for all the people of the region.

Joe Biden: (11:00)
We’re joining together, our partnerships are getting stronger, this is what we’re about. I want to thank you all, and I look forward to seeing both of you in person very soon I hope. Thank you. Thank you.