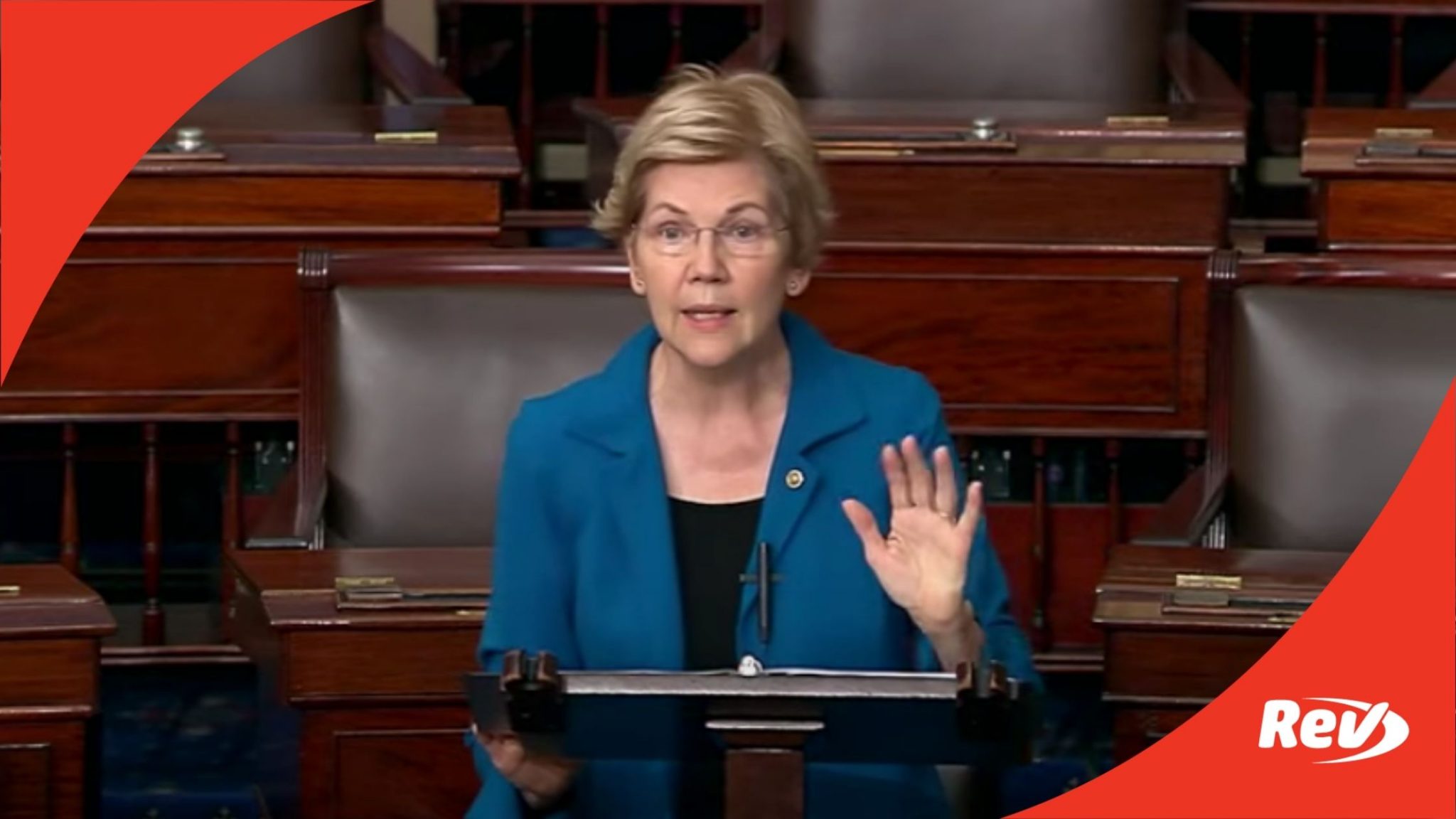 Senator Elizabeth Warren claimed there is a “culture of corruption” among top Fed officials during a Senate floor speech on October 5, 2021. Read the transcript of the speech here.

Senator Warren: (00:03)
Thank you, Mr. President. Mr. President, I rise to today to express concern about a culture of corruption among top officials at the Federal Reserve. Officials at the Federal Reserve are entrusted to make decisions that affect the global economy and touch the lives of every person in our country. These officials have access to private information, often gathered at the expense and even by legislative mandate. There is no room for self dealing by federal officials, there is no room for even the appearance of self dealing. Every member of the Federal Reserve should know that without a reminder from Congress, but evidently there is a problem at the Fed. We don’t know the scope of the problem or how long it has been going on, but a very disturbing picture is emerging. Last month, it was discovered that during the economic turmoil of 2020, as the fed was called on to take extraordinary measures to support our economy, Robert Kaplan, president of the Federal Reserve bank of Dallas made multiple million dollar plus stock trades.

Senator Warren: (01:16)
It was also disclosed that in the same period, Eric Rosengren, president of the Federal Reserve Bank of Boston made multiple purchases in sales relating to his stakes in real estate investment trusts and other securities. A new report last week revealed that a third key Fed official, vice chair Richard Clarida also traded between one million and five million out of a bond fund into stock funds exactly one day before Fed Chair Powell publicly suggested possible policy actions that would significantly affect bonds and stocks. The Federal Reserve makes hugely consequential decisions, decisions involving interest rates, trillions of dollars worth of lending and debt and the regulation and supervision of the banking and financial systems. 2020 was a particularly consequential year with the Fed taking unprecedented steps to back stop financial markets in response to the pandemic.

Senator Warren: (02:27)
To make these specific decisions, Fed officials needed access to vast quantities of proprietary non-public data and information about individual firms, the state of the economy and upcoming Fed actions. Under these circumstances, for Fed officials to actively trade in the market raises legitimate questions about conflicts of interest and insider trading. These Fed officials actions show at a minimum, very bad judgment. They also suggest that some fed officials believe that building up their own personal wealth is more important than strengthening the American people’s confidence in the Fed.

Senator Warren: (03:20)
In his years as chair of the Fed, it is not clear why Mr. Powell did not take steps to prevent these activities. Surely he understands that this kind of behavior by Fed officials corrodes the public trust in the Fed and that in turn, such corrosion undermines the effectiveness of the Fed. Surely he understands that the Fed officials trades run a foul of agency guidelines, which state that officials should, “Avoid any dealings or other conduct that might convey even an appearance of conflict between their personal interests, the interests of the Federal Reserve system and the public interest.” Surely he knows that according to the Fed’s policies, its officials, “Have a special response for maintaining the integrity, dignity, and reputation of the system. Accordingly, they should scrupulously avoid conduct that might in any way tend to embarrass the system.”

Senator Warren: (04:37)
Surely he is aware that the Fed’s policies instruct officials to, “Carefully adhere to the spirit, as well as the letter of the rules of ethical conduct,” and to, “Exemplify in their own conduct the high standard set forth in those rules.” As the sitting chair of the Federal Reserve, the responsibility to safeguard the integrity of the Federal Reserve rests squarely with him. Setting the right culture at the Fed and making sure safeguards are in place to prevent self dealing and to protect the public’s confidence should be the minimum standard any Federal Reserve chair should meet. And once there is a problem, a quick and aggressive response is critical. Chair Powell has failed at both tasks. Last week, I said that I would not support Chair Powell’s renomination because in one decision after another, he has consistently failed to serve as an effective financial regulator, but that is not his only failure.

Senator Warren: (05:56)
Chair Powell has also failed as a leader. Our nation needs leaders who are willing to set aside and enforce strong ethic standards and who act swiftly when a problem arises. Our nation does not need a go along to get along leader who doesn’t know or doesn’t care when on his watch, people with great responsibility advance their own interests over the interests of our nation, or someone who drags his feet in dealing with problems that shake the public’s confidence in the institution he leads. We need changes at the Fed. I have already called on key Fed officials to voluntarily abide by stricter ethic standards. Yesterday I asked the SED to investigate these trades to determine whether these Fed officials may have broken laws on insider trading. And I will continue to push Chair Powell to vigorously enforce the ethics standards that already exist and to put stronger ethics standards in place at the Fed.

Senator Warren: (07:09)
In the last Congress, I introduced sweeping ethics legislation, the Anti-Corruption and Public Integrity Act. This legislation would ban all individual stock ownership by members of Congress, by cabinet secretaries, by senior congressional staff, by federal judges, by White House staff and by other agency officials, while in office. It would prohibit all go government officials from holding or trading stock if its value might be influenced by their agency, their department, or their actions. And it would require senior government officials and White House staff to divest from privately owned assets that could present conflict of interest.

Senator Warren: (08:00)
This far reaching legislation would also tighten conflict of interest and recusal requirements and shut the revolving door between industry and government. Now, look, this proposal won’t solve every problem. And for any officials who have engaged in illegal insider trading, we don’t need a new law to hold them accountable, but this proposal would dramatically reduce the possibility for any appearance of impropriety at the Fed and at every other federal agency and in Congress and in the White House. I urge Congress to pass this legislation and to restore Americans’ trust in our elected leaders and the officials who make key decisions. Key decisions, not only about the economy, but about public health, the environment, and every other aspect of government. There’s a lot of housekeeping we need to do, and the faster we start, the faster we get it done. Thank you, Mr. President, I yield the floor.