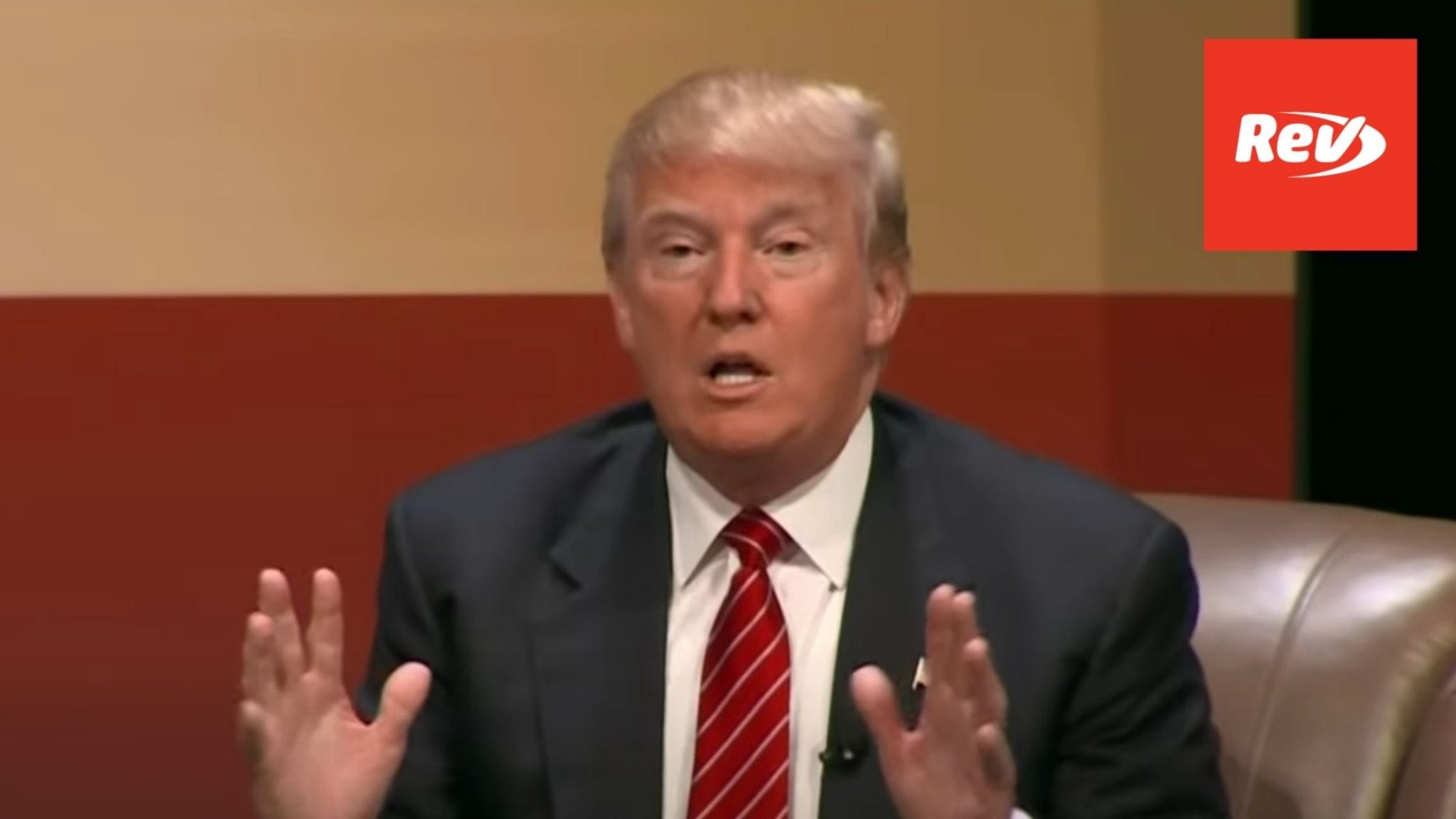 Donald Trump spoke about John McCain at a campaign event on July 20, 2015 in his 2016 Presidential run. He said “I don’t like losers” in regards to the 2008 election, said McCain was “not a war hero,” then said “he’s a war hero because he was captured. I like people that weren’t captured.” Read the transcript here.

Frank: (00:01)
John McCain, a war hero, five and a half years as a POW, and you call him a dummy. Is that appropriate in running for president?

Donald Trump: (00:11)
Okay. Let’s. You got to let me speak though Frank because you interrupt all the time, okay? No, I know him too well, that’s the problem. Let’s take John McCain. I’m in Phoenix. We have a meeting that is going to have 500 people at the Biltmore Hotel. We get a call from the hotel, it’s turmoil. Thousands and thousands of people showing up three, four days before, they’re pitching tents on the hotel grass. The hotel says, “We can’t handle this. It’s going to destroy the hotel.” We move it to the convention center. We have 15,000 people, John, the biggest one ever bigger than Bernie Sanders, bigger than… 15,000 people showed up to hear me speak, bigger than anybody, and everybody knows it.

Donald Trump: (00:53)
A beautiful day with incredible people that were wonderful great Americans, I will tell you. John McCain goes up, “Oh boy, Trump makes my life difficult. He had 15,000 crazies show up.” Crazies, he called them all crazy. I said, “They weren’t crazy. They were great Americans.” These people, if you would have seen these people… I know what a crazy is. I know all about crazies, these weren’t crazies. So he insulted me and he insulted everybody in that room. And I said, “Somebody should run against John McCain who has been, in my opinion, not so hot.” And I supported him, I supported him for president. I raised a million dollars for him. It’s a lot of money. I supported him. He lost, he let us down. He lost. So I’d never liked him as much after that because I don’t like losers. But Frank, Frank, let me get to it. He hit me.

Donald Trump: (01:46)
He’s a war hero because he was captured. I like people that weren’t captured, okay? I hate to tell you.

Donald Trump: (01:52)
He’s a war hero because he was captured, okay? And I believe perhaps he’s a war hero, but right now he said some very bad things about a lot of people. So what I said is John McCain, I disagree with him that these people aren’t crazy. And very importantly, and I speak the truth, he graduated last in his class at Annapolis. So I said, nobody knows that. I said he graduated last or second to last. He graduated last in his class at Annapolis and he was upset. I said, “Why? For telling the truth?” See, you’re not supposed to say that somebody graduated last or second to last in their class. Because you’re supposed to be like, Frank says, very nice. Folks, I want to make America great again. We want to get down to brass tacks. We don’t want to listen to his stuff with being politically correct and everything else. We have a lot of work to do.

Donald Trump: (02:44)
Frank, the other day, Hillary Clinton got up and she said, “I didn’t like Mr. Trump’s tone.” We have people, Christians, having their heads cut off in the Middle East. We have people dying all over the border, where I was right, a hundred percent right. We have all of this like medieval times and she said, “I didn’t like his tone.” And you know who else said that? Jeb Bush. “I didn’t like his tone.” What does it have to do with tone? We want results. This group wants results. We don’t want tone.

Frank: (03:23)
So we’ve got people lined up for questions. I just got one more. Because you used the word Christian. Have you ever asked God for forgiveness?

Donald Trump: (04:30)
When you left the church, you were disappointed that it was over. He was the greatest guy and then he passed away, but he was a great… He wrote The Power of Positive Thinking, which is a great book.

Donald Trump: (04:48)
I’m not sure I have. I just go and try and do a better job from there. I don’t think so. I think if I do something wrong, I think I just try and make it right. I don’t bring God into that picture. I don’t. When we go in church and when I drink my little wine, which is about the only wine I drink, and have my little cracker, I guess that’s a form of asking for forgiveness, and I do that as often as possible because I feel cleansed. Okay? To me, that’s important. I do that. But in terms of officially, I could say absolutely, and everybody… I don’t think in terms of that. I think in terms of, let’s go on and let’s make it right.

Speaker 3: (05:37)
Respectfully we remember the 1992 election, Ross Perot costs us that election.

Speaker 3: (05:42)
Would you go on record today as saying that if you can’t get the Republican nomination, you will not run as a third party candidate?

Donald Trump: (05:56)
I want this country. This country has great potential, but soon it’s not going to have that potential because we’re being drained by incompetent leaders, by horrible people. As an example, with the Iran deal, which is a total disaster, we didn’t get our four hostages back. That’s just one aspect of it. And just this morning and yesterday, Kerry, Secretary Kerry, who’s the worst, worst negotiator. I mean, he didn’t read The Art of the Deal folks. So Secretary Kerry said very strongly, I just told, he said very strongly, “We didn’t want to bring up the hostages. We didn’t want to complicate our deal.” That was the reason. We didn’t want to [inaudible 00:06:29].