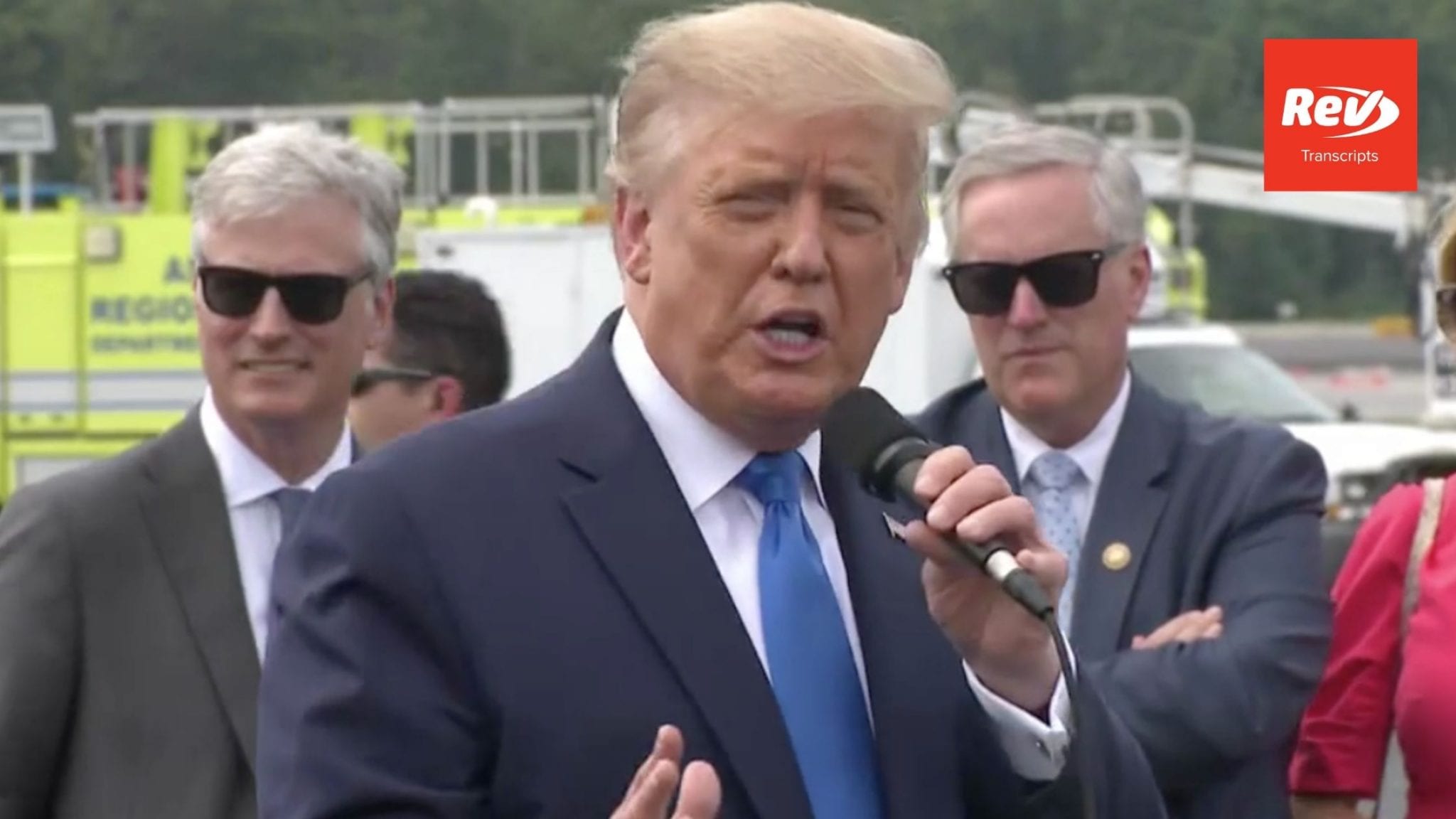 President Donald Trump spoke to a crowd at an airport in North Carolina on August 24. He talked immigration and coronavirus therapeutics. Read the transcript of his remarks here.

President Donald J. Trump: (02:49)
Hello. Hello, everyone. Hi. Can you hear me? Can you hear me over there? I want to thank you very much. You’ve been incredible. This state has been incredible. That’s one of the reasons… You know you have a governor that shut it down. You’re in a shutdown. Right? But I want to just thank … This is some little gathering. This is just from the heart. This is from the heart. You know we worked out a program where all of the food that was being wasted goes to people, and helping people during the pandemic, and you people produce the food like nobody produces the food, so we took care of it.

President Donald J. Trump: (03:28)
Then we’re actually doing today a $1 billion program that’s going to help everybody. It’s going to be great. You know we’re hitting new records in the stock market. We just hit new employment records for the last three months. Nine million people jobs. We reduced taxes. We reduced regulations. It’s all coming back so fast, and you’ll see it. The pandemic goes away. The vaccines are going to be, I believe, announced very soon. Yesterday night, we did it last evening, we announced a very, very big therapeutic, and the therapeutic it’s something that really has been an incredible thing.

President Donald J. Trump: (04:07)
This would have taken, I wouldn’t say years, maybe not many years, but it would have taken a long time to have gotten it approved. We got the FDA to do it very quickly. So now we have another therapeutic, and it’s really been effective. So I just want to think convalescent plasma, but you know that, convalescent plasma, and hopefully you won’t need it. But we have it, and remdesivir, and so many others. So many others are coming out now. The job they’ve done, the job our country has done, has been amazing. We’ll be talking about it on Thursday evening. Is anybody going to be watching television on Thursday evening? Right?

President Donald J. Trump: (04:45)
So we’ll be talking because really the job that we’ve done is incredible. It’s incredible, and none of us get any credit for it, and that’s okay. As long as we have the end result, and the end result is we have to make people safe. We have to make our country safe. We have to build up our military, and now it’s at a level that it’s never been at before. We’ve rebuilt our entire military. The wall, as you know, will soon be finished, and our border is secure. I heard somebody on the other side, “We want to tear down the wall.” Do you believe this? Tear down the wall.

President Donald J. Trump: (05:22)
They want people, they’ll say, “Let the people come in illegally. Let them come through.” We can’t do that. We have a great country. We are going to be in a position … As you know, prior to the plague coming in from China, we did numbers the likes of which have never been seen. Our employment numbers, every number, stock market. Now you look at it today, the stock market is just about set to break the all-time record, your 401(k)s. All of the things that we’re doing, and to me that’s like a leading indicator. Everything’s following. The economy’s going to come back. Next year we’re going to have one of the best years economically and in other ways that we’ve ever had before.

President Donald J. Trump: (06:08)
So watch on Thursday night. We just accepted the votes, and I guess the official acceptance is on Thursday, but we just got a great delegate count. Mark Meadows, is that right? Mark Meadows, from a wonderful state known as North Carolina. Mark Meadows, and he’s got to have a great young man taking his place. We think he’s going to do a fantastic job. But Mark has been great, our chief of staff. So I just want to thank everybody. This has been a real lovefest between North Carolina and Trump. Right? It’s been incredible. We’ve had a tremendous success here, and you’ve had … Last year you had the most successful year you ever had, and you’re going to break that record again next year. We’re going to have an incredible third quarter.

President Donald J. Trump: (07:36)
So I just want to thank all of the people from North Carolina. As you know, because of the shutdown, we wanted to have our convention here, and you have a governor that basically didn’t want to play ball. He didn’t want to do it, and by the way, Dan Forest is running and he’s great. He’s great. I think he’s going to do very well, but he’s really a terrific guy, and he’d be a terrific governor, and I hope you’re going to do it. I felt really an obligation to come here today to say hello to the people of North Carolina, and we appreciate your love, and I love you right back. Thank you all very much. Thank you very much. Take care of yourselves. Thank you everybody. Thank you. Thank you. Good luck. We love you all. Thank you.