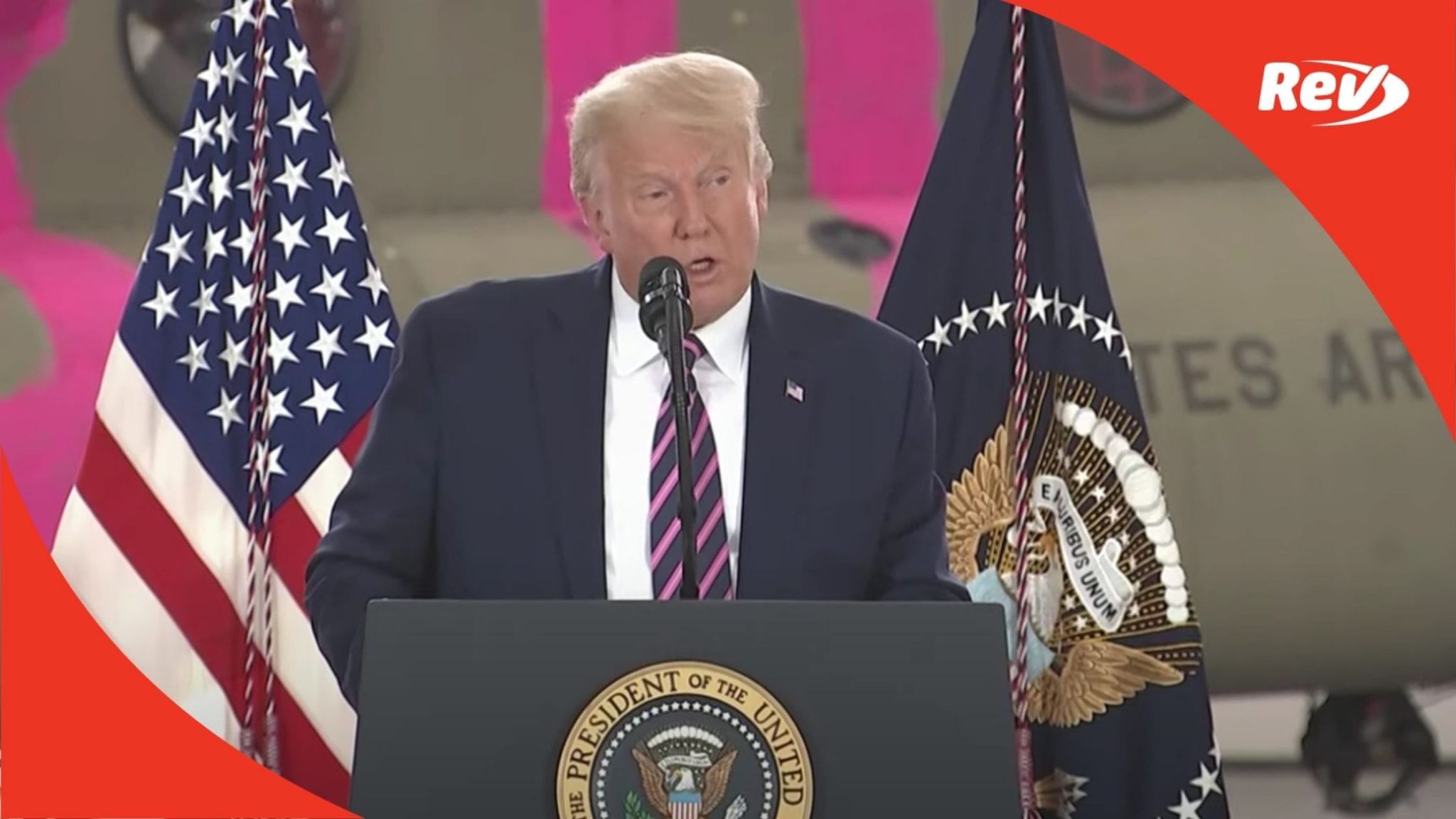 President Donald Trump recognized the California National Guard amid the wildfires on September 14. Read the transcript of his speech here.

Donald Trump: (00:02)
Thank you very much, it’s a great honor. And this is beautiful, aircraft we’re looking at, look at that beautiful, very expensive plane for good reason. Today, it’s my profound honor to award seven extraordinary soldiers with the Distinguished Flying Cross for their remarkable courage to rescue their fellow citizens. I want to very much thank Major General Matthew Beevers for being with us today, thank you general, thank you very much. Thank you, general, very much, it’s a great honor to see you. I want to welcome… And please sit down, families, please sit down. You’re all very proud of these gentlemen, I think, right? I think. Is there anybody not proud of their husband? Is anybody not proud? No, good, then we’ll proceed. Welcome to chief warrant officers, Joseph Rosamond, Kipp Goding, Irvin Hernandez, Brady Hlebain, Ge Xiong, and sergeants, George Esquivel and Cameron Powell. Thank you very much, and I will say that it’s such an honor to be in your presence. You’ll hear a story shortly that was very inspiring to me and to everybody else, and that’s why these are very important medals, and it’s great to be with you.

Donald Trump: (01:33)
Joining us are also warriors, but warriors of a different type, they’re called great congressmen, and they’re from your area. Doug LaMalfa. Thank you, Doug, very much, appreciate it. Tom McClintock. Thanks, Tom, doing a great job. And Greg Walden, and we’ll miss you, Greg. I can’t believe you’re not going to be there. He’s retiring undefeated, nobody would defeat him, and… But it’s a great honor. In you it’s really been fantastic working with Greg, we worked on something in particular, right-to-try, right, Greg? And we got it done after 44 years, we got it done, so thank you very much. Just over one week ago, these brave pilots and crew members of the California Army National Guard embarked on a harrowing mission. As the sunset on September 5th, they boarded two helicopters that are behind me, then they flew into blazing flames, raging wind, and it was raging, and blinding spoke to rescue families who were trapped by the massive Creek fire at the Mammoth Pool campground.

Donald Trump: (02:43)
While they were on their way to the campground, the crew received word from state and local officials and headquarters that it was far too dangerous to continue the mission, turn back, but they decided to continue anyway knowing they might not return, they knew that people were in danger, great danger. As night set in, they could see almost nothing through the miles of dense smoke. Using their night goggles and their expert navigation skill, they reached the camp, they found the stranded families many of whom were badly burned and injured and they loaded them, as many as they could, onto the two helicopters. Then they made the perilous flight back to the base. As soon as they unloaded the passengers, they again risked their lives and flew back into the blazing fire to rescue more victims. Their superiors said, “You cannot do this, you cannot do it again.” They did it. The smoke had become even more overpowering yet they returned a third time. After 10 grueling hours, they completed their mission having saved the lives of an astounding 242 people, we are proud of them. Wow. That’s an incredible story.

Donald Trump: (04:03)
And I spoke to some people that really didn’t want you to do it, they didn’t want you to go back on those flights. To each of you, your unyielding and undying determination lifts our nation, you’re what makes our nation great. And we thank you very much, incredible job. Over the last week, these devoted soldiers have continued to rescue more stranded individuals from danger. In fact, less than 48 hours after their rescue at Mammoth Pool, they flew to another treacherous mission. On the first two attempts, they were forced to turn around and they were advised to abort the mission, “You must abort the mission,” but they chose to try a third time at great risk to their own lives, through tremendous skill and incredible valor they saved 50 people from absolute eminent danger. Our nation is strong because of remarkable individuals like these service members.

Donald Trump: (05:00)
In the midst of our greatest trials and biggest challenges, America prevails because of the brave and selfless patriots who risk everything so that they may save lives of people, in many cases, that they don’t know, they have no idea who they are. It’s like law enforcement, they save the lives of people that, for the most part, they have no idea who they are, but they’re so determined to do it. Today, our country honors their courage and we’re inspired by their example. And we thank God for the blessing and all of our blessings that you’re safe. Our nation has really benefited by your bravery. And on behalf of our great nation, I thank you very much. As your president, I thank you very much, great job. And now I’d like to ask the military aid to come forward and read the citation, please.