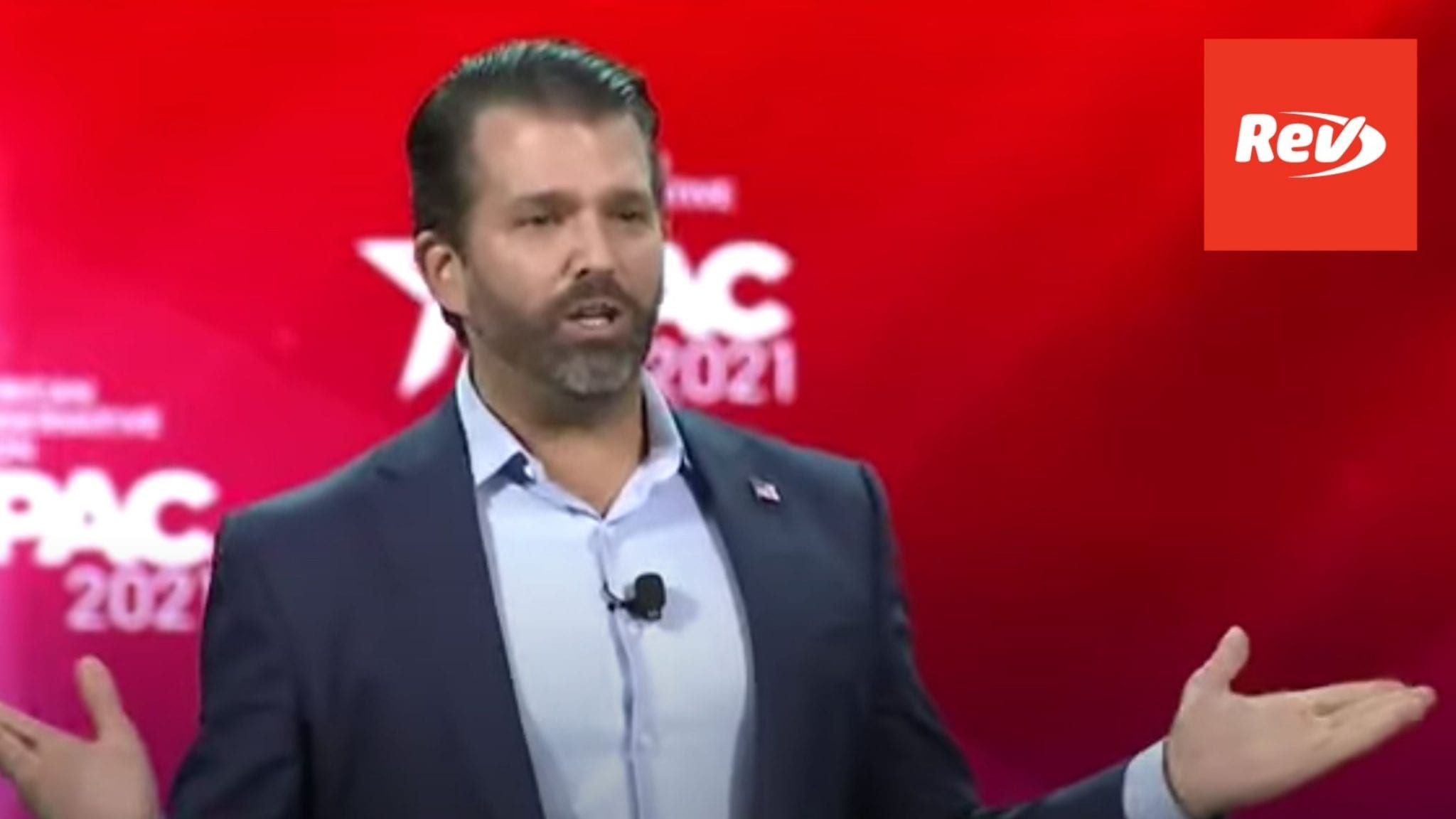 Donald Trump Jr.: (00:13)
Wow. How’s it going CPAC? Or I heard someone earlier phrasing it a little bit better, TPAC. It’s what it feels like guys. Well first and foremost, it’s awesome to be here. It’s great to see this kind of enthusiasm, and it’s great to actually be in a full room. You know honestly guys, what I see in Florida right now is exemplary of the Republican party. Right? This is a state like the party is, that has opened schools, opened businesses, and opened churches. What we’ve seen in some of the more left-leaning states is exactly the opposite. The only thing that they have open is open borders, and it doesn’t work guys. In the first 30 days of Joe Biden’s presidency all of the things that I said would come true in the book, Liberal Privilege that I wrote last summer, are happening.

Donald Trump Jr.: (02:04)
No, the Chinese have a great return on investment. But guys, more importantly, who would have thought that within 33 days we’d be bombing the Middle East again? I would have. Oh no guys, come on, the military industrial complex? I’m surprised it took them 33 days. I guess they waited until the first month so they couldn’t say that was part of the first 30. But it was only shortly thereafter where we started bombing the Middle East.

Donald Trump Jr.: (02:44)
Speaking of bombing the Middle East, have you seen Liz Cheney’s poll numbers? No, listen. The one thing I’ll say for Liz Cheney is, I’m sure she has a lot of bipartisan support, because if there’s one thing that she and Joe Biden definitely want to do it’s bomb the Middle East. Everything else is a disaster. Everything else is just RINO policies. The kinds of policies that put the Republican party in a position where they needed a Donald Trump. No, seriously, Liz Cheney and her politics are only slightly less popular than her father is at a quail hunt. What? Fact checkers, fact checkers, please have at it. Fact check true. Right?

Donald Trump Jr.: (03:54)
Listen, like I said, Liz Cheney, she hates Donald Trump and his policies because her family has a long history of friendly fire. But she also hates them because she’s tied to an establishment that has done nothing but fail us time and time again. You’ve heard the rhetoric from some of them over the last couple weeks, and now you’ve seen that change very quickly. Because if there’s one thing the Republican Party has been really good at over the last few decades, it’s snatching defeat from the jaws of victory.

Donald Trump Jr.: (05:06)
So you know what guys, the first 30 days has been a disaster. The lies the media told you wouldn’t happen are all happening. But hey, at least they have a diverse cabinet. Right? No. Yeah, it’s very diverse. That’s what we saw. Right? What is the policy of the SBA? Well, first and foremost, we appointed a woman. Well, that’s wonderful. Is she competent? Because there’s competent women and there’s incompetent women, just like there’s competent men and incompetent men. We’ve seen that. We know that to be a fact. But when you don’t have policy to address the incompetence and think you can get away with it by just talking about diversity blindly, it’s sort of a problem isn’t it?

Donald Trump Jr.: (05:59)
This month alone, they’ve banned the Muppets. Right? I mean if there’s things that you thought were sort of above cancellation, you would be wrong. There is nothing the radical left won’t cancel. Hasbro now wants a gender neutral Mr. Potato Head. These are the issues of our times folks. I mean if Hasbro really wanted a gender neutral Mr. Potato Head so badly, they should just slap the picture of CNN’s Brian Stelter on the cover of their next potato. What? They don’t call him Mr. Potato Head for nothing. I mean you know. We might as well get something out of the branding.

Donald Trump Jr.: (06:59)
But guys, we can talk about all of these things. We can talk about the liberal hypocrisy, liberal privilege. Just look at how magically in 33 days, children in cages turned into migrant shelters for children. Now mind you, nothing actually changed. If you look at the pictures, there’s nice bars on the walls. Nothing changed other than the media’s outlook. Where is the outrage about this? Where is the outrage about an asinine immigration policy that is encouraging people to bring children unaccompanied and otherwise into a country? Guess who gets hurt? Our low-wage earners, who for the first time in modern history under Donald Trump started seeing real wage growth.

Donald Trump Jr.: (07:59)
We see it time and time again. There’s a double standard by which we live. But when you look at what’s going on, if people were informed of the actual facts, rather than spoonfed a narrative by Big Tech and the mainstream media, we wouldn’t be in these things. There was a poll that came out just this week that said one in six people would not have voted for Biden had they known about the Hunter Biden scandal. Yeah. Where is Hunter? Guys, I’m sure he’s making billions in China right now. Don’t worry. Don’t worry. One in six guys. 17% of the 80 million that voted for Joe Biden had they even heard of the basics of his corruption. We were all talking about it guys. It wasn’t anything new, but that also shouldn’t surprise us.

Donald Trump Jr.: (08:55)
We have been talking about Andrew Cuomo sentencing Nana to death for 10 months, but no one was going to talk about it until they got their wishes. No one was going to address Democrat incompetence. We believe all women until they accuse a Democrat, then not so much. But guys, that’s why we have to stay engaged. That’s why we have to stay in the fight. That’s why we can’t allow them to steamroll us like they have done for decades. When you look at what’s going on just this week in Congress, you have Democrats petitioning, major corporations, Comcast, Amazon, to ban conservative news outlets. Not radical parties, Fox News, Newsmax, OAN. Just ban them. You don’t see Republicans saying, “Let’s talk about CNN as a place of disinformation.”

Donald Trump Jr.: (10:05)
I mean as a recipient of their ire for a couple of years, I can assure you that they were lying about Russia collusion. We all know that now. But no one actually brings it up because they can get away with it. They are able to do that. Big Tech will silence you if you come out against it. They will crush you. They will call you racist and everything else. Just like, imagine we’ll bring back Cuomo. Right? Imagine Ron DeSantis did what Cuomo has done over the last couple years. He wouldn’t be getting an Emmy, he’d be in jail. Right?

Donald Trump Jr.: (11:23)
That’s what we’re up against folks. But together we can win these fights. We have to be vocal. We can’t be put in the corner. We must be out and engaged, and that’s where you guys come in. So I’m looking forward to Sunday. I imagine it will not be what we call a low-energy speech, and I assure you that it will solidify Donald Trump and all of your feelings about the MAGA movement as the future of the Republican Party. So thank you CPAC. Thank you for being here. Thank you for the love. You guys are the best.