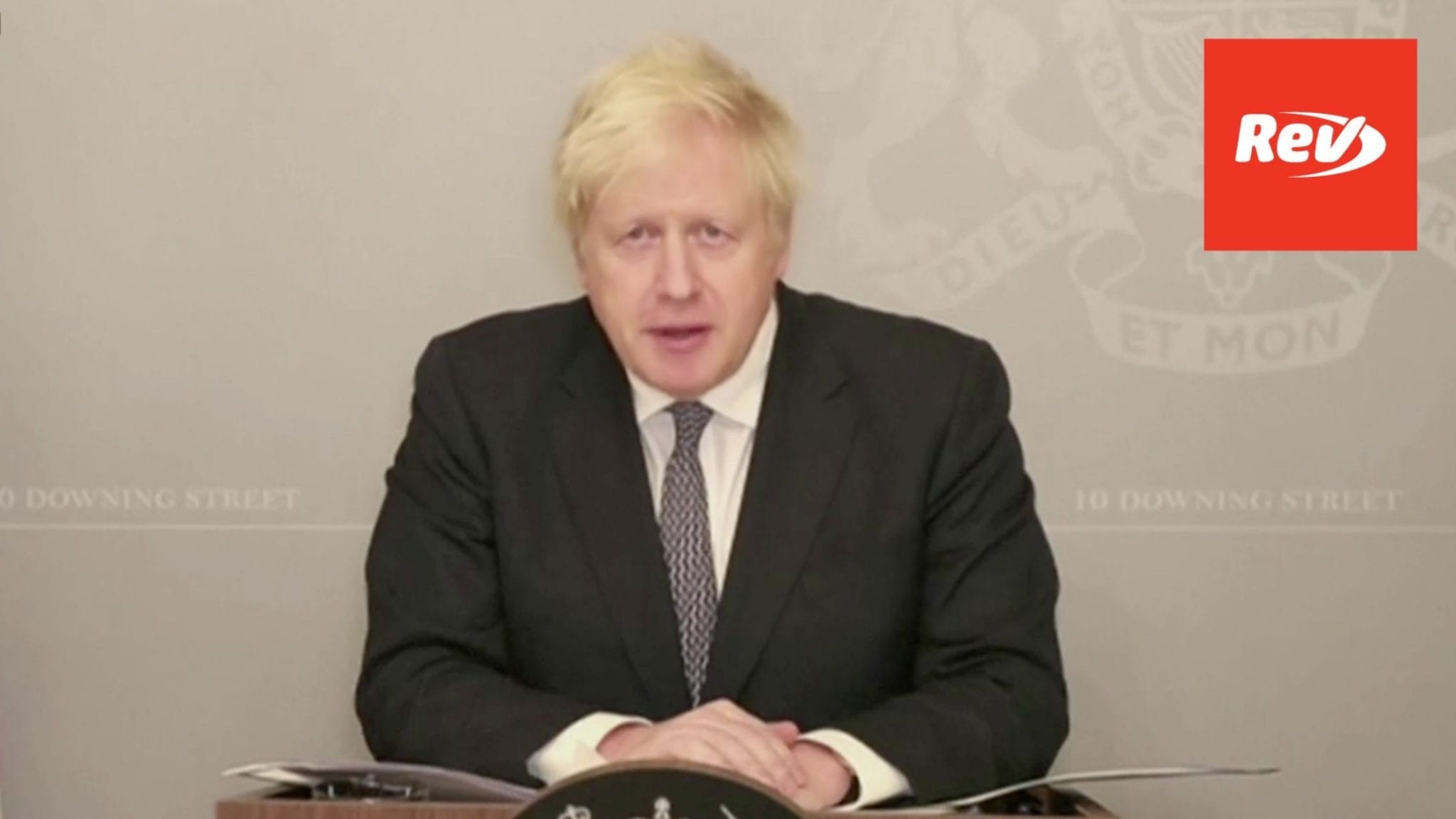 UK Prime Minister Boris Johnson addressed the House of Commons about COVID-19 restrictions for the coming winter months on November 23. Read the transcript of his speech briefing here.

Boris Johnson: (03:49)
Mr. Speaker, thank you very much. And with your permission, I will make a statement on the government’s COVID winter plan. For the first time since this wretched virus took hold, we can see a route out of the pandemic. The breakthroughs in treatment and testing and vaccines mean that the scientific Calvary is now in sight, and we know in our hearts that next year we will succeed. By the spring, these advances should reduce the need for the restrictions we’ve injured in 2020, and make the whole concept of a COVID lockdown redundant. When that moment comes, it would have been made possible by the sacrifices of millions of people across the UK. I’m acutely conscious that no other peace time prime minister has asked so much of the British people and just as our country has risen to every previous trial, so it has responded this time and I am deeply grateful.

Boris Johnson: (04:52)
But the hard truth, Mr. Speaker, is that we’re not there yet. First, we must get through winter without the virus spreading out of control and squandering our hard won gains at exactly the time when the burden on the NHS is always greatest. Our winter plan is designed to carry us safely to spring. In recent weeks, families and businesses in England had, once again, steadfastly observed nationwide restrictions and they’ve managed to slow the growth of new cases and ease the worst pressures on our NHS. I can therefore confirm the national restrictions in England will end on the 2nd of December and they will not be renewed. From next Wednesday, people will be able to leave that home for any purpose and meet others in public spaces, subject to the rule of six. Collective worship weddings and outdoor sports can resume, and shops, personal care, gyms, and the wider ledger sector can reopen.

Boris Johnson: (06:00)
But without sensible precautions, we would risk the virus escalating into a winter or new year surge the incidence of the disease is alas still widespread in many areas, so we’re not going to replace national measures with a free-for-all or the status quo anti-COVID. We’re going to go back instead to a regional tiered approach, applying the toughest measures where COVID is most prevalent. And while the previous local tiers did cut the number and cut the R number, they were not quite enough to reduce it below one. So the scientific advice, I’m afraid, is that as we come out, our tiers need to be made tougher.

Boris Johnson: (06:53)
In particular, in tier one, people should work from home wherever possible. In tier two, alcohol may only be served in hospitality settings as part of a substantial meal. In tier three, indoor entertainment, hotels, and other accommodation will have to close, along with all forms of hospitality except for delivery and takeaways. And I’m very sorry, obviously, for the unavoidable hardship that this will cause for business owners who’ve already endured so much disruption this year.

Boris Johnson: (07:26)
Mr. Speaker, unlike the previous arrangements, tiers will now be a uniform set of rules. We’ve also, and that’s to say we won’t have negotiations on additional measures with each region, it’s a uniform set of rules. And we’ve learned from experience that there are some things we can do differently. So from the 10:00 PM closing time of hospitality, we’re going to change that so that it is last orders at 10, with closing at 11. In tiers one and two, spectator sports and business events will be free to resume inside and outside with capacity limits and social distancing, providing more consistency with indoor performances in theaters and concert halls. We’ll also strengthen the enforcement ability of local authorities, including specially trained officers and new powers to close down premises that pose a risk to public health.

Boris Johnson: (08:30)
Later this week, we will announce which areas will fall into which tier, I hope on Thursday, based on analysis of cases in all age groups, especially the over sixties, also looking at the rate by which cases are rising or falling, the percentage of those tested in a local population who have COVID, and the current and projected pressures on the NHS. I’m sorry to say we expect that more regions will fall at least temporarily into higher levels than before, but by using these tougher tiers and by using rapid turnaround tests on an ever greater scale to drive R below one and keep it there, it should be possible for areas to move down the tiering of scale to lower levels of restrictions. By maintaining the pressure on the virus, we could also enable people to see more of their family and friends over Christmas.

Boris Johnson: (09:39)
Mr. Speaker, I can’t say that Christmas will be normal this year, but in a period of adversity, times spent with loved ones is even more precious for people of all faiths and none. We all want some kind of Christmas. We need it. We certainly feel we deserve it. But what we don’t want is to throw caution to the winds and allow the virus to flare up again, forcing us all back into lockdown in January. So to allow families to come together while minimizing the risk, we’re working with the devolved administrations on a special time-limited Christmas dispensation embracing the whole of the United Kingdom and reflecting the ties of kinship across our islands.

Boris Johnson: (10:33)
But this virus obviously is not going to grant a Christmas truce. It doesn’t know it’s Christmas. And Mr. Speaker, and families will need to make a careful judgment about the risk of visiting elderly relatives. We’ll be publishing guidance for those who are clinically extremely vulnerable on how to manage the risks in each tier, as well as over Christmas.

Boris Johnson: (10:59)
As we work to suppress the virus with these local tiers, two scientific breakthroughs will ultimately make these restrictions obsolete. As soon as a vaccine is approved, we will dispense it as quickly as possible. But given that this can’t be done immediately, we will simultaneously use rapid turnaround testing, the lateral flow testing that gives results within 30 minutes to identify those without symptoms so they can isolate and avoid transmission. We’re beginning to deploy these tests in our NHS and in care homes in England, so people will once again be able to hug and hold hands with loved ones instead of waving at them through a window.

Boris Johnson: (11:55)
By the end of the year, this will allow every care home resident to have two visitors who can be tested twice a week. Care workers looking after people in their own homes will be offered weekly tests from today. And from next month, weekly tests will also be available to start in prisons, food manufacturing and those delivering and administering COVID vaccines. We’re also using testing, as the house knows, to help schools and universities stay open, and testing will enable students to know they can go home safely for Christmas, and indeed back from home to university.

Boris Johnson: (12:39)
But there is another way of using these rapid tests, that is to follow the example of Liverpool, where in the last two and a half weeks over 200,000 people have taken part in a community test community testing, contributing to a very substantial fall in infections. So together with NHS test and trace and our fantastic armed forces, we will now launch a major community testing program, offering all local authorities in tier three areas in England a six week surge of testing. The system is untried and there are, of course, many unknowns. But if it works, we should be able to offer those who test negative the prospect of fewer restrictions, for example, meeting up in certain places with others who have also tested negative. And those towns and regions which engage in community testing will have a much greater chance of easing the rules, the tiering that they currently endure.

Boris Johnson: (13:54)
Mr. Speaker, we will also use daily testing to ease another restriction that is impinged on many lives. We will seek to end automatic isolation, the close contacts of those found positive. Beginning in Liverpool later this week, contacts who are tested every day for a week will only need to isolate if they themselves test positive. If successful, this approach will be extended across the health system next month, and to the whole of England from January. But of course, we’re working with the devolved administrations to ensure that Wales, Scotland, Northern Ireland also benefit, as they should and will, from these advances in rapid testing.

Boris Johnson: (14:42)
But clearly, the most hopeful advance of all is how vaccines and now edging ever closer to liberating us from the virus, demonstrating emphatically that this is not a pandemic without end. We can take great heart from today’s news, which has the makings of a wonderful British scientific achievement. The vaccine developed with astonishing speed by Oxford University and AstraZeneca is not one of three capable of delivering a period of immunology. We don’t yet know when any will be ready and licensed, but we have ordered 100 million doses of the Oxford vaccine and over 350 million in total, more than enough for everyone in the UK, the crown dependencies and the overseas territories. And the NHS is preparing a nationwide immunization program ready next month, the like of which we’ve never witnessed.

Boris Johnson: (15:48)
Mr. Speaker, 2020 has been in many ways a tragic year, when so many have lost loved ones and faced financial ruin, and this will be still a hard winter. Christmas cannot be normal and there’s a long road to spring, but we have turned a corner and the escape route is in sight. We must hold out against the virus until testing and vaccines come to our rescue and reduce the need for restrictions, and everyone can help speed up the arrival of that moment by continuing to follow the rules, getting tested and self isolating when instructed, remembering hands, stay, space, and pulling together for one final push to the spring when we have every reason to hope and believe that the achievements of our scientists will finally lift the shadow of this virus. And, Mr. Speaker, I commend this statement to the house.