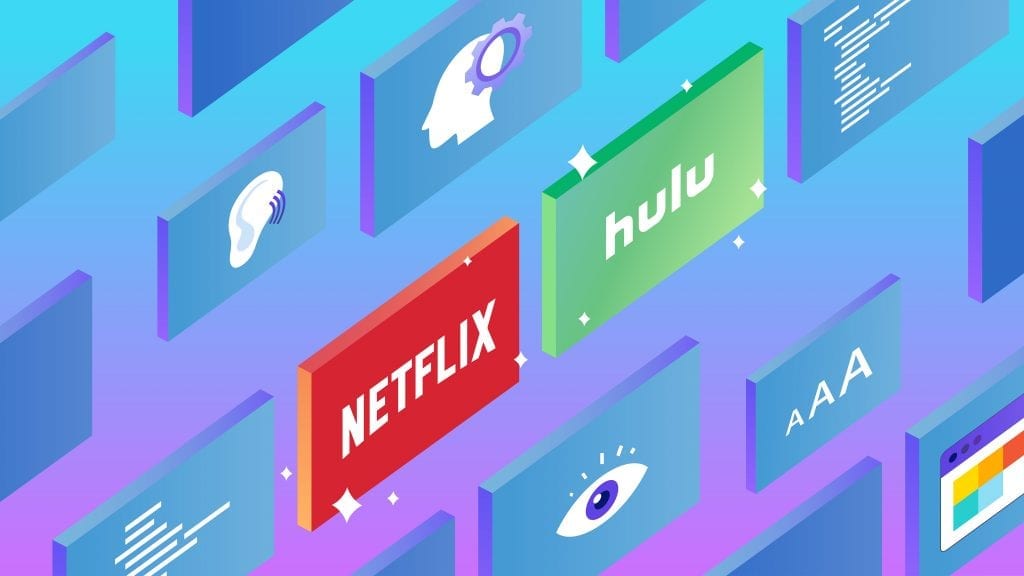 The Americans with Disabilities Act (ADA) ensures that persons with disabilities have access to all facets of public life. But compliance has been a challenge for major streaming services, like Netflix and Hulu. Much of the challenge stems from the fact that the act doesn’t explicitly address captioning online content. As a result, Netflix and Hulu have found themselves at the center of class action lawsuits that address their lack of access.

A 2012 court ruling deemed Netflix and other streaming services “places of public accommodation,” and, under the ADA, such places are required to provide access to those with disabilities. Therefore, streaming services require video captioning and other online aids. Non-compliance by any web-based business can lead to a massive fine, which is a setback for big companies but can cause smaller businesses to go broke. Here’s how Netflix and Hulu solved their compliance problems.

Courts have found that web-based businesses are considered public domain and are bound by the ADA. When Title III of the ADA was written in 1990, it was geared toward protecting persons with disabilities in physical, public spaces. With the increased use of the internet, online businesses are expected to comply and provide equal access to those with disabilities.

In 2010, Netflix found itself in hot water when the National Association of the Deaf (NAD) filed a class-action lawsuit against it. The NAD alleged that Netflix didn’t provide closed captioning for deaf and hard-of-hearing people streaming Watch Instantly content. Courts ultimately sided with the NAD and agreed that Netflix was in violation of ADA legislation.

In the consent decree, Netflix agreed to caption 100% of its video content by 2014 and pay almost $800,000 in fines and fees. That’s a lot of money, a sum that would likely bankrupt a smaller company.

Despite this setback, Netflix focused on the positive aspects of the experience. Neil Hunt, its Chief Product Officer at the time, said, “We have worked consistently to make the broadest possible selection of titles available to Netflix members who are deaf or hard of hearing and are far and away the industry leader in doing so.” He continued, “We are pleased to have reached this agreement and hope it serves as a benchmark for other providers of streaming video entertainment.”

In 2017, the American Council of the Blind (ACB) and the Bay State Council of the Blind (BSCB) filed a class-action lawsuit against Hulu. The suit alleged that Hulu wasn’t providing blind and visually impaired people with access to the streaming service—online videos didn’t have audio descriptions included. Without this separate audio track, blind and visually impaired users couldn’t utilize Hulu’s content.

The suit also claimed Hulu’s website and apps weren’t compatible with screen readers, a software that converts visual content into audio so that blind and visually impaired users can navigate websites.

The ACB, BSCB, and Hulu reached an agreement where Hulu would make its content compatible with screen readers and provide descriptive audio tracks for videos.

Of the agreement, Kim Charlson, the ACB President at the time, said in part, “Movies and television are a central pillar of American culture. As television and movie content are increasingly delivered through streaming services, this agreement ensures that the blind community will receive and be able to independently use accessible Hulu content. This access is critical to making certain that people who are blind are included as equal participants in today’s society.”

There are two reasons why streaming services find it hard to comply: the initial debate about whether online services qualify as public space, and the cost and time needed to adapt services.

Before courts ruled that online businesses are “places of public accommodation,” Netflix argued that since it complied with more modern legislation—the 21st Century Communications and Video Accessibility Act (CVAA)—it wasn’t in violation of the dated ADA (1990).

The CVAA was enacted in 2010 and designed to ensure that persons with disabilities have equal access to new forms of communication (like mobile messaging and tech hardware—cell phones, tablets, computers). It basically tries to bridge the gap between the ADA and technological advances.

To clarify the confusion, courts ruled that online services are public spaces, and online accessibility is required. It doesn’t matter that the ADA was signed in 1990; persons with disabilities have the right to equal access.

Cost and time to adapt services

Once Netflix and Hulu agreed to the settlements they reached, they set about making changes to their services.

The Netflix Post Partner Program (NP3) works with post-production companies to add subtitles, dubbing, captioning, and descriptive audio to all video content. These processes are vital for providing an exceptional user experience. However, they’re costly and time-consuming.

Vendors have to complete an extensive application process before qualifying for the program. Once movies, shows, or documentaries are accepted by Netflix, the producers, along with their distributor or aggregator, have to work with these approved vendors to make the content accessible. The review process alone can take between two to four months to complete.

Hulu had to obtain audio tracks for its video content. The process involves multiple steps:

In addition to this process, Hulu had to modify its video player to give users the option to turn descriptive video on and off. Hulu also had to update video filters to make it easier to find videos with descriptive audio. Hulu would have required developers and their IT team to spearhead the shift in how its platform operated.

Netflix and Hulu had to make massive and expensive changes to their systems to comply with ADA legislation. Facing this kind of upheaval, smaller streaming services would be hard-pressed to make such drastic changes. The good news is you don’t have to spend a fortune to update your video library. You can save thousands in implementation costs by using Rev.

Here’s how Rev saves you time and money:

Let’s look at an example of Rev in action. Let’s say you have a two-hour independent film to upload to your streaming service. A 120-minute video will cost you $120 to caption, and the final file will be available in 24 hours.

You’ll have access to the Captions Editor, where you can automatically replace casual words, incorporate regional spelling, remove unnecessary spaces between captioned words, and set start times for when words appear. Your preferences can be saved in the editor and applied to all your projects—saving you time—which is also helpful if you have brand standards.

In this example, you’ll spend $120 and have a short turnaround time. And since you don’t risk ADA fines, you can focus on video content that increases your revenue.

Learn from the giants

Whether streaming services are big or small, they all have to comply with ADA legislation. The good news is smaller services can offer the same standards as large competitors without breaking the bank. Your content caters to a wider audience, and you can focus on growing your platform.