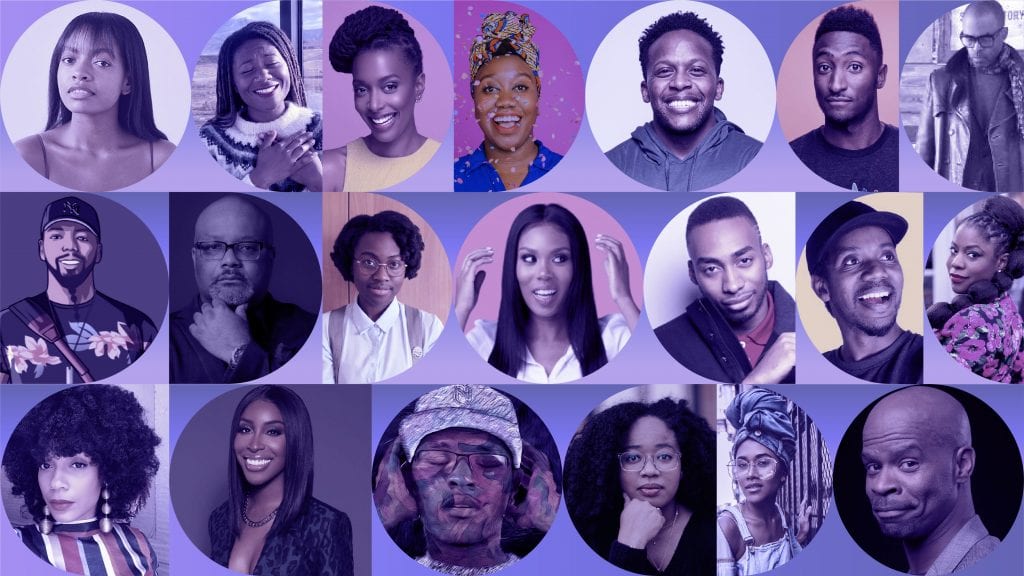 These creators explore innovation, adventure, beauty, struggle, resilience, and more through Black creativity. And although none of the YouTube celebrities cited below has matched George Washington Carver’s peanut accomplishments, each is making Black history in their own impressive way.

Without further ado, let’s meet the stars. Some brief introductions below…

“Changing the standard of beauty, one video at a time” – Naira Banks of Los Angeles recalls her motivation: videos for people who’ve gone through life believing dark skin was a roadblock. What she brings: Stop Doing THAT to Your Face … Start Doing THIS!  and African-Owned Makeup Brands You’re SLEEPING ON!

“Shattering stereotypes & breaking down cultural barriers” – Language instruction? Moses McCormick of Phoenix turns it into an internet hit. The instructional part: his Foreign Language Roadrunning (FLR) teaching method. The entertaining part: the videos, especially the series titled Black Man Surprises [so and so] by Speaking [choose a language].

“Being a YouTuber is like being an octopus” – Barack Obama, Bill Gates, Mark Zuckerberg … it’s no wonder New Yorker Marques Brownlee boasts huge numbers. And fans: Vic Gundotra, formerly of Google, terms Brownlee “the best technology reviewer on the planet.”

“I do this for the culture” – Among other things, Brooklyn’s Kia Marie instructs viewers how to re-do closets and successfully shop at thrift stores. Especially popular: 22 minutes on an “affordable hair-wash day” routine and how to style a Frohawk. (Look for the plant in her shower!)

“I got sick and tired of being sick and tired” – After watching the documentary Fat, Sick Nearly Dead in 2011, Joshua Black chose to be a vegan. “I haven’t looked back since,” he says. Now, he’s trying to educate Black viewers on how to fight the “health-related issues ravishing our community.”

“Bodies are built in the kitchen; sculpted in the gym” – Some year back, Kevin Curry viewed a unflattering photo of himself. Boom: over the next nine years, the ex-social media manager at Dell built a YouTube community following his healthy food ideas. He also wrote a Fit Men Cook cookbook.

“Exploring the ways that we interact with artificial intelligence, algorithms, and other new technologies” – Into technology, especially artificial intelligence? Jordan’s for you. A graduate student at Harvard and MIT, she delivers practical tips (Should You Buy The Amazon Halo?) and, sometimes, just blows your mind (How Much AI Do You Need To Make A Neuron?).

“If modern policing were to take a DNA test, it would come back 99%-100% racist. And thankfully, we don’t need anyone to spit in a tube to figure that out”) – Francesca Ramsey is a New Yorker whose career got a boost in 2012 when Shit White Girls Say … to Black Girls went viral. She’s hosted web series MTV Decoded, written for Yearly Departed on Amazon Prime and for The Nightly Show With Larry Wilmore, and wrote Well, That Escalated Quickly: Memoirs and Mistake of an Accidental Activist.

“Don’t expect perfect drone shots” – Self-description: “awkward but endearing.” Offer: no-frills takes based on her less-than-25, minimalist lifestyle. Example: realizing she was “close to retirement” after turning 24, she videoed her road trip from New York to Boston to “get an authentic cannoli.”

“What would happen if I shamelessly promoted myself for 365 days” – In 2012, creative producer/artist/photographer Maya Washington began a social media experiment – “shamelessly promoting” herself each day for a year. The result: a huge following. Some of her popular creations include “Tech Talk” (photography, videography, apps, and devices) and DIY (unpacks complex tech terms).

“I make things and read” – A simple formula is generating great results for this Netherlands-based YouTuber. Her works includes I’m White on the Inside (the Oreo Unpacked and Black Classics I KNOW You Have Never Heard Of.

Evelyn from the Internets

“Life makes me laugh” – Evelyn shares with her #InternetCousins a ton of laugh-worthy content. A Shorty Awards nominee, she’s won a Google grant to support Michelle Obama’s initiative for global girls’ education and the Excellence In Comedy Award at Toronto’s Buffer Fest 2019 for a short film. Worth a look: I Tried All The LaCroix Cúrate Flavors So You Don’t Have To.

“Do not let your broken parts define you or jeopardize the other relationships you have” – This multi-talented laugh maker features man-on-the-street interviews, stand-up comedy, and much more. Goal: make you laugh and inspire you. Several videos include his daughter (making breakfast or driving her to school). Bits: Went to Jail for a Joke and Laughing in Church.

“Through discipline you can reduce your vulnerability to being overruled by your emotions” – Atlantan Roberto Blake focuses on the “creator society,” offering hints on how to build audiences, sell products and monetize YouTube efforts. Take a look: 5 Minutes of LEGIT Ways to Make Money Online in 2021.

“Giving you the inside scoop on Icelandic nature, culture, history and language” – Believe it or not, Brooklyn-born Jewells Chambers lives in Iceland (where everyone is blond) and has a husband named Gunnar. Her work includes Iceland’s Response to George Floyd’s Death & Racism in the United States, The Evolution of Drag Culture in Iceland and Iceland’s First Black Citizen (Hans Jonathan, Hans Jónatan in Icelandic – look him up).

“Being Black and abroad sometimes means being ‘othered’ while you travel” – You may know Oneika Raymond: host of Travel Channel’s One Bag and You’re Out and Big City, Little Budget and on-air travel and lifestyle correspondent for NBC New York and CTV Canada. There’s a whole YouTube world as well.