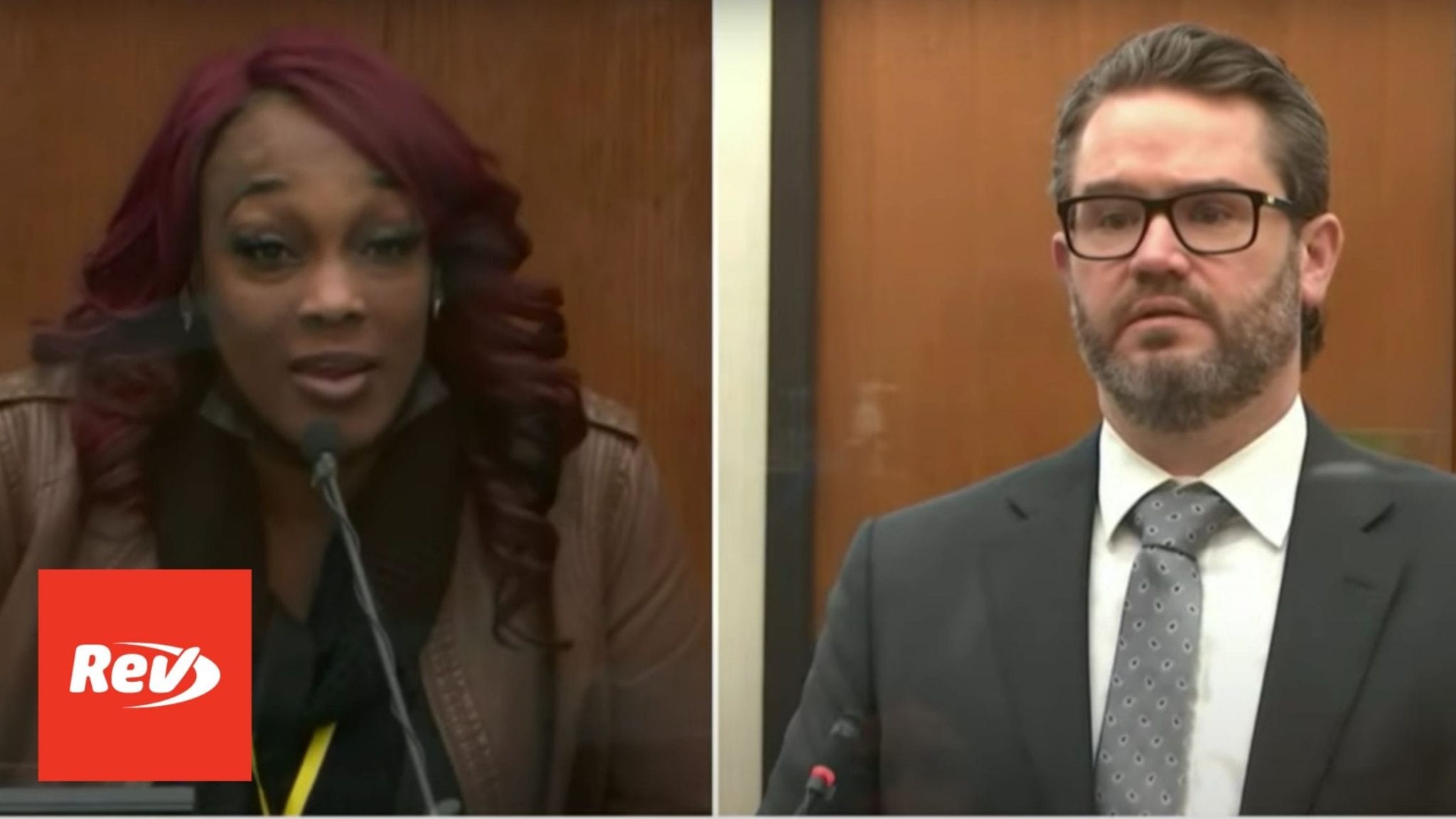 Shawanda Hill, the woman in the car with George Floyd before his death, testified during Derek Chauvin’s trial for murder on April 13, 2021. Read the transcript of her testimony remarks here.

Eric Nelson: (00:11)
On that date, were you at the Cup Foods located in Minneapolis?

Eric Nelson: (00:17)
Did you run into anybody that you knew while you were there?

Eric Nelson: (00:21)
And while you were at the Cup Foods or in the Cup Foods, did you have an opportunity to observe Mr. Floyd’s behavior, demeanor, things of that nature?

Eric Nelson: (00:32)
How would you describe Mr. Floyd’s behavior while inside of the Cup Foods.

Eric Nelson: (00:56)
Once you got into the car, did you observe any changes to his demeanor?

Shawanda Hill: (01:02)
When we were in the car for the first like eight minutes, we were talking and hugging, you know what I’m saying? Talking about what we were about to do. And then I got a phone call. And so, I was on the phone for the rest of the time until the little boys came to the car, and he fell asleep at that time.

Eric Nelson: (01:22)
So at some point during the course of the time that you were in the car with Mr. Floyd, Mr. Floyd suddenly fell asleep, right?

Eric Nelson: (01:31)
And the phone call you received, was that from your daughter?

Eric Nelson: (01:35)
And so you were talking with your daughter during that time.

Eric Nelson: (01:39)
And you described… Would you agree that at some point, you said some little boys. Are those employees at the store?

Eric Nelson: (02:21)
Was that kind of a sudden change from how you observed him in the store to the car?

Shawanda Hill: (02:25)
Yes, but he already told me in the store, he was tired because he had been working-

Eric Nelson: (02:42)
And so at some point, did the store clerks leave the side of the car?

Shawanda Hill: (02:47)
Yes. I told them that I would wake him up and send him in there because I didn’t have the money on me. I used my money, so.

Speaker 4: (02:58)
Wait till he finishes the question so that we don’t overlap. Okay? Because the court reporter is taking everything down, and it’s really hard if you overlap.

Shawanda Hill: (03:11)
Yes. I tried a couple of times, but then, I just let it go for a minute because I was back on the phone and… You want to hear the rest?

Eric Nelson: (03:22)
And did the store clerks come back to the car a second time?

Eric Nelson: (03:25)
Okay. And at some point, the police officers approached the car?

Matthew Frank: (03:57)
Good morning, Ms. Hill. I just have a couple of follow-up questions for you. Okay?

Matthew Frank: (04:02)
So during the period that you were with Mr. Floyd in the store, you said he was alert.

Matthew Frank: (04:30)
We just have to make sure that you wait til the question’s done, so we were talking over each other. Okay? I know it’s a hard habit to break, but we just have to be careful with that. Okay? And when you got back to the car, at some point he nodded off.

Matthew Frank: (05:09)
And at some point the police officers walked up, correct? Is that yes?

Matthew Frank: (05:14)
And, and then he… Well, you woke him up when the police officers walked up, correct?

Shawanda Hill: (05:32)
You want me to explain. Okay, thank you. So when I tried to wake him up, he woke up the second time. I said, “Floyd, the police is here. It’s about the $20 bill. Wasn’t real.” I kept saying, “Baby, get up. The police was out.” So he looked and we looked to the right and he had the police, he tapped on the window with a flashlight. And I’m like “Floyd.” And so he turned back around again, he’s like, “What, what?” And I was like, “Baby, that’s the police. Open the door, roll down the window, whatever he told you to do.”

Matthew Frank: (06:33)
But I want to go back and just cover one thing quick, because you… Where were you sitting in the vehicle?

Matthew Frank: (06:44)
Were there two officers that came to the vehicle?

Matthew Frank: (06:46)
So one came to the passenger side and one to the driver’s side?

Matthew Frank: (06:50)
So initially you saw one officer to your right on the passenger side, correct?

Matthew Frank: (07:07)
And when he was, during this time period, with coming out from Cup Foods and being in the vehicle, did he complain of shortness of breath at all?

Matthew Frank: (07:26)
And other than being sleepy or nodding off a little bit, did he seem abnormal to you in any way?

Matthew Frank: (07:35)
And did he seem startled when the officer pulled a gun on him?

Eric Nelson: (07:58)
Thank you. So while you were in the car, or prior to getting in the car, Mr. Floyd appeared to you to be normal, correct?

Eric Nelson: (08:12)
And then ultimately you had to make several efforts to try to wake him up.

Diane Macedo: (08:29)
So again, that’s Shawanda Hill. She was the woman in the car with George Floyd on May 25th. We saw her on some of the police body cam footage. She testified that while in Cup Foods that George Floyd was happy, he was normal, he was talking and he was alert. But she says once he got back in the car, that Floyd was sleepy. She says that for eight minutes they were talking and everything was fine. And then she received a phone call. She got on the phone. And the next thing that she noticed, by the time the police came to the car, she said that he had fallen asleep. She also said that when the Cup Foods employees came out to the car… Let’s listen to what the defense is saying here.

Diane Macedo: (09:11)
It sounds like they’re calling their next witness. But Hill says that ultimately that Floyd fell asleep several times in the car, that they tried to rouse him several times and that he would kind of gesture and then nod off, but ultimately he was awake and alert once officers approached the car, and one officer pulled a gun on George Floyd there.

Diane Macedo: (09:33)
That’s again, Shawanda Hill’s testimony, the woman who was in the car with George Floyd on May 25th.