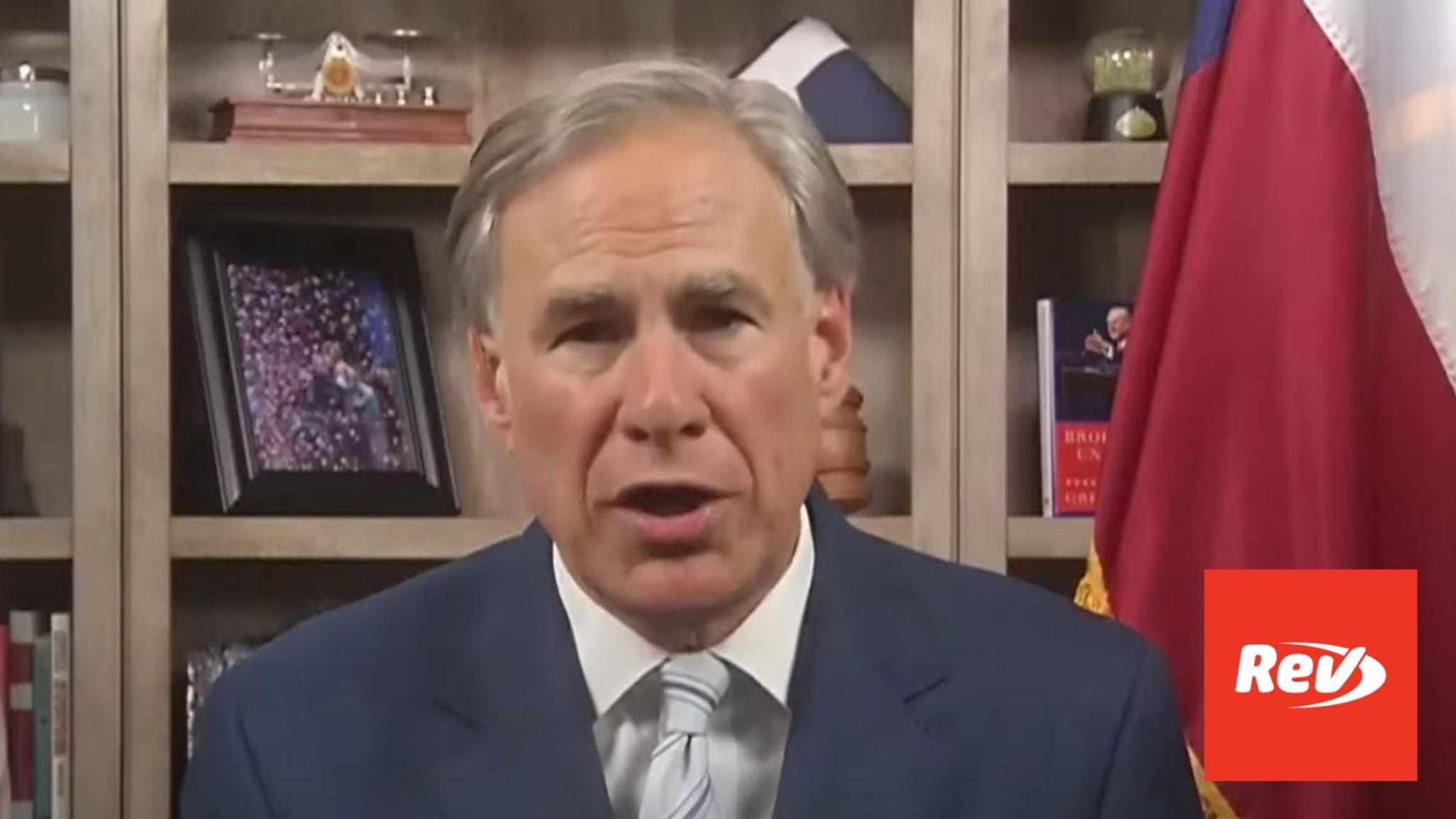 Texas Governor Greg Abbott participated in an interview with KVUE News on July 12 to discuss Democratic lawmakers leaving the state in order to stop GOP election legislation. He said Democratic lawmakers will be arrested when they return to Texas. Read the transcript of his remarks here.

Speaker 1: (01:44)
Welcome back. The Texas Legislature special session came to a screeching halt today as House Democrats are once again breaking quorum to keep the voting reform bills from passing.

Speaker 2: (01:54)
The Democrats are flying to Washington D.C. tonight saying, quote, “We need Congress to act now to pass the For The People Act and the John Lewis Voting Rights Act to protect Texans and all Americans from the Trump Republicans’ nationwide war on democracy,” end quote.

Speaker 1: (02:09)
Joining us now to discuss today’s events is Texas Governor Greg Abbott. Governor, thank you for your time this afternoon here on KVUE.

Speaker 1: (02:18)
Let’s begin with this. Does this mean there’s now no way for Senate Bill 1 and House Bill 3, the election and voting reform bills, to be passed during this special session? And is there anything you as Governor can do to get the Democrats back to Texas?

Governor Greg Abbott: (02:34)
Sure. Well, let me answer those questions in sequence. First, there still remains plenty of time to pass out not just the bills that you mentioned, but there’s a lot of other bills on there that I know for a fact that your viewers right now, they care a whole lot about, such as property taxes. Property taxes are sky high in the Austin area and we have a bill to reduce those property taxes.

Governor Greg Abbott: (02:55)
I know that your viewers care a whole lot about the children who are going through foster care. We have additional funding to provide for foster care as well as for our retired teachers. And as you know, we need more law enforcement to keep our streets safe. We have funding for law enforcement in high crime areas, such as the Austin area.

Governor Greg Abbott: (03:30)
Answering your second question, yes, there is something the Governor can do. First, I will tell you though that what the House of Representatives can do, the Speaker can do is issue a call to have these members arrested. In addition to that, however, I can and I will continue to call special session after special session after special session all the way up until election next year. And so if these people want to be hanging out wherever they’re hanging out on this taxpayer paid junket, they’re going to have to be prepared to do it for well over a year. As soon as they come back in the state of Texas, that will be arrested. They will be cabined inside the Texas Capitol until they get their job done.

Governor Greg Abbott: (04:07)
Everybody who has a job must show up to do that job, just like your viewers watching right now. State representatives have that same responsibility.

Speaker 2: (04:16)
So Governor, is the time for compromise over? It sounds like you guys are ready to play hardball, but are Republicans willing to meet Democrats somewhere in the middle when it comes to election reform in Texas?

Governor Greg Abbott: (04:29)
So listen, what I’m about to tell you is very important, and that is there were a couple of issues that not just Democrats, but even Republicans wanting to achieve, and that was to make sure that the souls to the polls would still be allowed to have expanded voting on Sundays, as well as not have the provision in there that would overturn elections.

Governor Greg Abbott: (05:10)
Anyone who suggests this deprives anybody the right to vote is just simply flat out wrong. This provides more hours to vote than ever before allowed under law in the state of Texas.

Speaker 1: (05:21)
So Governor, why is there a need for these bills when you say that? Was there fraud involving 24 hour voting locations or mail-in ballots in the state? Has there been some widespread issues that you all have found?

Governor Greg Abbott: (05:36)
So you need to understand that actually there is a federal district judge appointed by Barack Obama who wrote what I’m about to tell you in a legal opinion involving voting in Texas, where she wrote that voter fraud occurs, quote, “In abundance with regard to ballot harvesting and mail-in ballots in the state of Texas.” That is an Obama-appointed federal judge saying that. And that is exactly why the one issue that the Legislature is focused on about making the voter election system more sound does involve a mail-in ballots.

Governor Greg Abbott: (06:09)
I will add that members of the Texas House of Representatives on the Capitol floor have said the mail-in ballot situation is one that has the possibility of fraud and shoring that up is a way to ensure election integrity. So this is something that does have bipartisan support.

Speaker 2: (06:27)
Now, Governor, I know lawmakers, they’re spending time on election and voting issues. You say they would have looked at things involving foster care, foster children, and property taxes, but what about the electrical grid? So many Texans say that is something that needs to be addressed right now. They want to know what’s going to keep Texas from suffering another massive failure and having more Texans die because of it.

Governor Greg Abbott: (06:52)
Sure. So first, during the regular session, there were so many laws that were passed by the state legislature that addressed the electrical grid and it empowered the Public Utilities Commission, as well as ERCOT. ERCOT sent me a letter that we made public today, earlier today, that talked about these things that ERCOT has worked on. ERCOT has already ensured that they have increased electric power generation. They have increased more reserves compared to last year. They’re adding additional reserves during uncertain weather conditions, and they’re installing protocols to ensure a price certainty during weather challenges.

Governor Greg Abbott: (07:33)
And tomorrow I think it is, you will see that ERCOT announced its 100 day plan to ensure stability and certainty in the power grid in the state of Texas.

Speaker 1: (07:44)
Texas Governor Greg Abbott, thank you for your time this afternoon here on KVUE, we appreciate it.