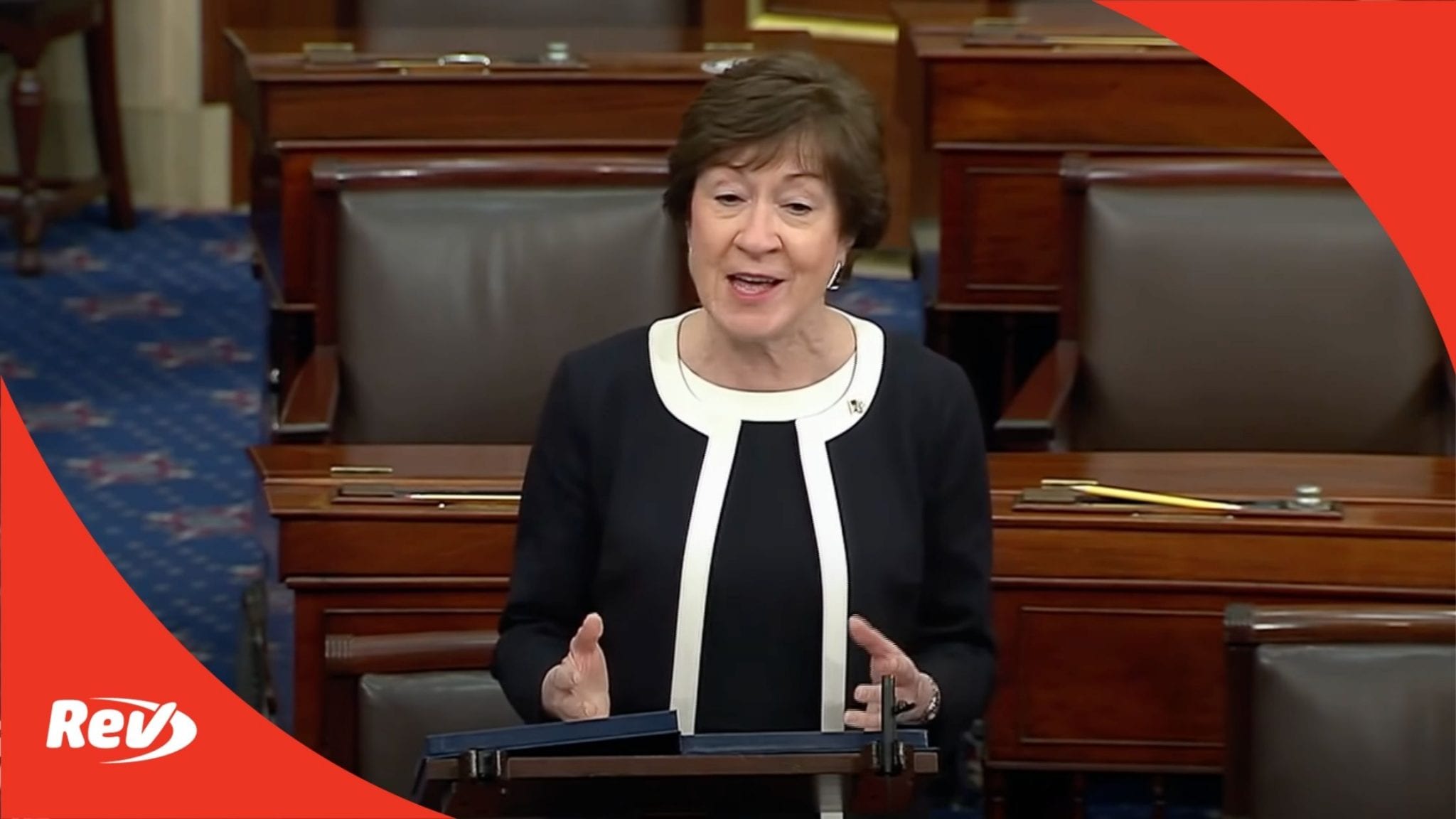 Senator Susan Collins gave a speech on the Senate floor after she voted to convict Donald Trump in his second impeachment trial. Read the full transcript of her February 13, 2021 speech here.

Senator Susan Collins: (00:03)
Thank you, Mr. President. Mr. President, the hallmark of our American democracy is the peaceful transfer of power after the voters choose their leaders. In America, we accept election results, even if our candidate does not prevail. If a candidate believes that there is fraud, the courts can hear and decide those issues. Otherwise, the authority to govern is vested in the duly elected officials.

Senator Susan Collins: (00:45)
Mr. President, on January 6th, this Congress gathered in the Capitol to count the votes of the Electoral College pursuant to the process set forth in the 12th Amendment to the Constitution. At the same time, a mob stormed the capital determined to stop Congress from carrying out our constitutional duty. Mr. President, that attack was not a spontaneous outbreak of violence. Rather, it was the combination of a steady stream of provocations by President Trump that were aimed dead, overturning the results of the presidential election.

Senator Susan Collins: (01:45)
The President’s unprecedented efforts to discredit the election results did not begin on January 6th. Rather, he planted the seeds of doubt many weeks before votes were cast on November 3rd. He repeatedly told his supporters that only a rigged election could cause him to lose. Thus began President Trump’s crusade to undermine public confidence in the presidential election unless he won.

Senator Susan Collins: (02:31)
Early on the morning of November 4th, as the ballots continued to be counted, President Trump claimed victory and asserted that Democrats were trying to steal the election. On November 8th, the day after several media outlets had declared Joe Biden the apparent winner based on state by state results, President Trump tweeted, “This was a stolen election.” With that, Mr. President, his post election campaign to change the outcome began.

Senator Susan Collins: (03:15)
Over the ensuing days and months, the President distorted the results of the election, continuing to claim that he had won white court after court throughout his lawsuits and States continued to certify their results. President Trump’s falsehoods convinced a large number of Americans that he had won, and that they were being cheated. The President also embarked on an incredible effort to pressure state election officials to change the results in their States. The most egregious example occurred on January 2nd. In an extraordinary phone call, President Trump could be heard alternating between lobbying, cajoling, intimidating, and threatening the election of officials in Georgia.

Senator Susan Collins: (04:29)
“I just want to find 11,780 votes,” he stated, seeking the exact number of votes needed to change the outcome in that state. Despite the President’s pleas and threats, the Georgian officials refused to yield to the presidential pressure as did state officials in other States. In December, President Trump’s post-election campaign became focused on January 6th, the day that Congress was scheduled to count the Electoral College votes.

Senator Susan Collins: (05:19)
Although this counting is a ceremonial and administrative act, it is never-the-less the constitutionally mandated final step in the Electoral College in the electoral process, and it must occur before a new president can be inaugurated. On December 19th, President Trump tweeted to his supporters, “Big protest in DC on January 6th. Be there. Will be wild.” In response, some of his campaign supporters changed the date for protests rallies they originally had scheduled to occur after the inauguration to happen instead on January 6th.

Senator Susan Collins: (07:07)
He issued a public letter on January 6th, making clear that his oath to support and defend the Constitution would prevent him from unilaterally deciding which electoral votes should be counted and which should not. During his speech at the Ellipse on January 6th, President Trump kept up that drum beat of pressure on Vice President Pence. In front of a large agitated crowd, he urged the Vice President to stand up for the good of our Constitution. “I hope Mike has the courage to do what he has to do,” President Trump concluded.

Senator Susan Collins: (08:04)
Mr. President, rather than facilitating the peaceful transfer of power, President Trump was telling Vice President Pence to ignore the Constitution and to refuse to count the certified votes. He was also further agitating the crowd, directing them to march to the Capitol. In this situation, context was everything. Tossing a lit match into a pile of dry leaves is very different from tossing it into a pool of water. And on January 6th the atmosphere among the crowd outside the White House was highly combustible, largely the result of an ill wind blowing from Washington for the past two months.

Senator Susan Collins: (09:12)
President Trump had stoked discontent with a steady barrage of false claims that the election had been stolen from him. The allegedly responsible officials were denigrated, scorned, and ridiculed by the President with the predictable result that his supporters viewed any official that they perceived to be an obstacle to President Trump’s reelection as an enemy of their cause. That set the stage for the storming of the capital for the first time in more than 200 years.

Senator Susan Collins: (10:07)
Nearly 30 minutes after the capital first came under attack, members of Congress, law enforcement, and everyone else here in the Capitol waited in vain for the President to unequivocally condemn the violence and tell his misguided supporters to leave the capitol. Rather than demand an end to the violence, President Trump expressed his frustration once again that the Vice President had not stopped the votes certification as he had urged. Shortly after the Vice President was whisked away from this very chamber to avoid the menacing mob chanting, “Hang Mike Pence,” President Trump tweeted, “Mike Pence didn’t have the courage to do what should have been done.”

Senator Susan Collins: (11:23)
Instead of preventing a dangerous situation, President Trump created one. And rather than defend the constitutional transfer of power, he incited an insurrection with the purpose of preventing that transfer of power from incurring. Whether by design or by virtue of a reckless disregard for the consequences of his action, President Trump subordinating the interests of the country to his own selfish interests bears significant responsibility for the invasion of the capitol.

Senator Susan Collins: (12:19)
Mr. President, this impeachment trial is not about any single word uttered by President Trump on January 6th, 2021. It is instead about President Trump’s failure to obey the oath he swore on January 20th, 2017. His actions to interfere with the peaceful transition of power, the hallmark of our Constitution and our American democracy were an abuse of power and constitute grounds for conviction.

Senator Susan Collins: (13:15)
Two arguments have been made against conviction that deserve comment. The first is that this was a snap impeachment that the House failed to hold hearings, conduct an investigation, and interview witnesses. And that is true. Without a doubt, the House should have been more thorough. It should have compiled a more complete record. Never-the-less, the record is clear that the President, President Trump abused his power, violated his oath to uphold the Constitution, and tried almost every means in his power to prevent the peaceful transfer of authority to the newly elected President.

Senator Susan Collins: (14:24)
Second is the contention that the first Amendment protects the President’s right to make any sort of outrageous and false claims, no matter the consequences. But Madam President, the first Amendment was not designed and has never been construed by any court to bar the impeachment and convention of an official who violates his oath of office by summoning and inciting a mob to threaten other officials in the discharge of their constitutional obligations.

Senator Susan Collins: (15:20)
My vote in this trial stems from my own oath and duty to defend the Constitution of the United States. The abuse of power and betrayal of his oath by President Trump meet the constitutional standard of high crimes and misdemeanors. And for those reasons, I voted to convict Donald J. Trump. Thank you, Madam President. I yield the floor.