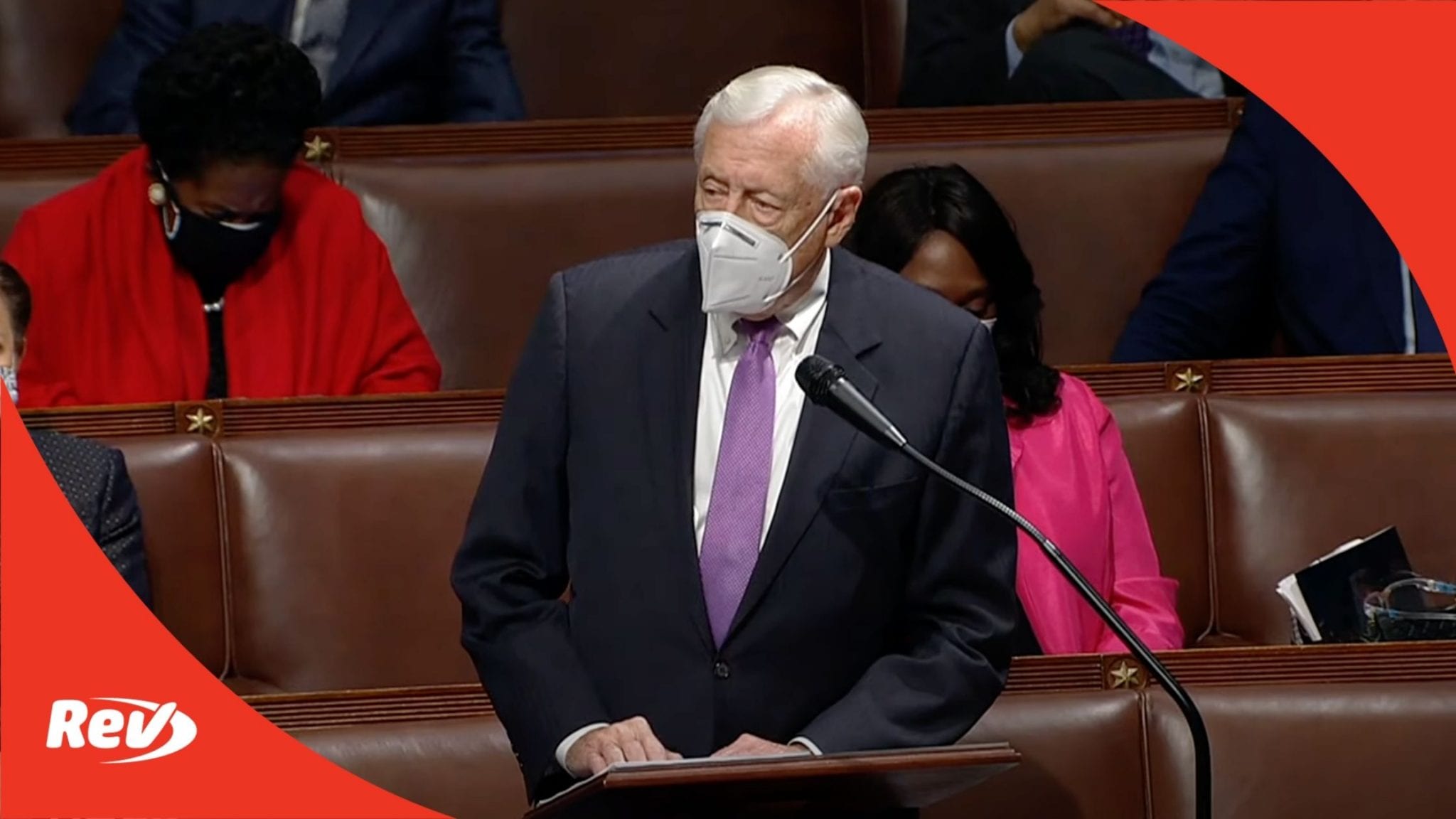 Rep. Steny Hoyer: (00:07)
This is a troubled time, a sad time. Is a time where all of us have stood almost to a person and lamented the violence and the assault on this Capitol and the assault on democracy itself. It was right to do that, but this impeachment ought to be put in the perspective of what the Republican chair of the Republican conference said it was. She said the President of the United States summoned the mob, assembled the mob and lit the flame of that attack. There has never been, she said, a greater betrayal by a President of the United States of this office, of his office and his oath to the constitution. That is why we are here today. That is why we are here today just a week before that president, at the request of the American people, will leave office.

Rep. Steny Hoyer: (01:49)
And the issue is what do we do? The 433 of us, I believe who are here, do on behalf of the American people to respond to what Representative Cheney described happened on the 6th of January? A mob assembled by, summoned by, and then spoken to, to light the flame of the attack to Stop the Steal, as we sat here, exercising our constitutional duty, and to his great credit, the Vice President of the United States, following the constitution of the United States of America, not withstanding fact that he was opportuned by the President not to do so.

Rep. Steny Hoyer: (03:06)
That mob sent by the President to stop the steal did so for a few hours, not the steal, but the constitutional duty that we had. And so we ask ourselves, what do we do? What is our responsibility? What should we say? In light of only the Civil War as an analogy. That doesn’t mean there haven’t been demonstrations in Washington before and demonstrations throughout this country before, but it is the first and only physical presence other than the 9/11 attack on this nation, which came from abroad and had a plane aimed at our Capitol dome. This attack was not from abroad. It was as Liz Cheney said, summoned, assembled and inflamed by the President of the United States of America, who in Liz Cheney said words that there has never been a greater betrayal by a President of the United States of his office and his oath to the constitution.

Rep. Steny Hoyer: (04:45)
I pride myself as a member of this Congress who for 40 years has worked in a bipartisan fashion with many of your leaders and do to this day, but are we to remain silent in the face of Liz Cheney’s saying this was the greatest betrayal of the duty of the President of the United States in history? Are we just staying silent? Will we not stand up and say, this is not acceptable. And I’m speaker for four years, Donald Trump has made no effort to hide his ambitions or his lacking of Republican principles.

Rep. Steny Hoyer: (05:36)
Not our principles, but the principles that Abraham Lincoln was just quoted as having said. Your president, our president has never displayed those in the four years he’s been president of United States. He has allowed little constraint on his worst inclinations. His desire for autocracy and glorification of violence have not been tempered, but rationalized, rationalized by those who sought to profit financially and politically from their proximity to power. Upon the foundations of virtue, reason, and patient wisdom laid down by George Washington as our first president, Donald Trump has constructed a glass palace of lies, fear-mongering, and sedition.

Rep. Steny Hoyer: (06:32)
Last Wednesday on January 6th, the nation and the world watched it shatter to pieces. There can be no mistaking any longer the kind of man sitting in the oval office or his intentions and capabilities. The curtain has been pulled back the office to which he was elected, could not temper or reform him. Washington’s legacy was passed down to us, not as written decrees.

Rep. Steny Hoyer: (07:15)
Washington’s legacy was passed down to us, not as written decrees, but understood norms. How we ought to act, how we ought to conduct ourselves, term after term each occupant has observed those norms out of a recognition that our Constitution’s articles are not the only preservative of our democracy. For more than two centuries, Madam Speaker, whenever those norms were tested and strained, good and virtuous citizens on both sides of the aisle found common purpose in reaffirming those norms. But memory fades, and from time to time, it must be refreshed. Madam Speaker, as the framers emerged from the Constitutional Convention, Benjamin Franklin was asked whether they had made America a monarchy or a Republic. Probably all of us know this response, “A Republic,” he answered. “If you can keep it.” That’s the question today, if we can keep it. And the way we keep it is to say no to actions and words that do not promote the keeping of that Republic.

Rep. Steny Hoyer: (08:50)
For millennia people have understood that a Republic is only as stable as and lasting as the citizens and leaders who commit themselves to its upkeep. This president has shown us he’s not committed to that project. His tweets every day have shown he is not committed to that project. Indeed, he openly disdains it and appears to prefer the alternative. But what of the rest of us? Those of us who have the honor and the great privilege and the weighty responsibility to represent the views of 750,000 of our fellow citizens. We in this Congress have an opportunity, no, a duty, to demonstrate our commitment, both as leaders and as citizens to keeping America a Republic, a Republic that resolves its differences, not through being ordered to come to the Capitol to prevent them from stealing the election, which was an absurd assertion from the very first day it was made.

Rep. Steny Hoyer: (10:09)
We cannot erase the last four years, Madam Speaker. We cannot turn back the clock, but we can look to the ideals and principles inherited from great presidents like Washington, like Jefferson. And yes, certainly like Abraham Lincoln and Franklin Roosevelt. And from outstanding Americans like Frederick Douglass, Harriet Tubman, Susan Anthony, Cesar Chavez, Martin Luther King, Thurgood Marshall, our beloved John Lewis and yes, RBG, Ruth Bader Ginsburg, who taught us a lot about equality and inclusion. It’s up to us to restore the vibrancy, Madam Speaker, of our democracy by reaffirming our commitment to the norms.They passed onto us and entrusted to our care. But to make that possible, Madam Speaker, we must rise to this moment and not only affirm the virtues we cherish, but reject the vices we abhor. That’s what I’m asking my fellow representatives on both sides of the aisle to do today.

Rep. Steny Hoyer: (11:29)
We all stood and we abhorred the violence that occurred and the threat to the very democracy that we hold so dear and swore an oath to protect and uphold. Reject deceit, reject fear-mongering, reject sedition, tyranny, and insurrection. Reject the demand for fealty to one man over fidelity to one’s country. When I addressed the house during the debate over the Articles of Impeachment in December, 2019, I said the following. We need not ask who will be the first to show our courage by standing up to President Trump. The question we must ask, who will be the last to find it? Senator McConnell, Representative Cheney, a number of other representatives who have spoken on this floor with great courage, Madam Speaker, because there is much fear of Donald Trump. There’s much fear of Donald Trump’s tweets. There’s much fear of Donald Trump’s retribution for opposition. In my view, Donald Trump demands absolute loyalty and gives none in return.

Rep. Steny Hoyer: (13:02)
I hope others will join Liz Cheney, hope others will be honest with themselves and with their constituents, as Liz Cheney was saying, there has never been a greater betrayal by a President of the United States of his office and his oath to the Constitution. Don’t dismiss that. She’s the daughter of a Vice President of the United States, who was the whip when I came to Congress. As she has taken a stand, I hope others will as well, Madam Speaker. Soon, the clerk will call the roll and ask for our votes. Make no mistake, this will be no ordinary roll call.

Rep. Steny Hoyer: (13:59)
This is about our country, our Constitution, and our democracy. These votes will be inscribed on the role of history, a record of courage and of our commitment to country and Constitution, of our commitment to the rule of law and renewal of that which we inherited and hope to pass on, unbroken, unshattered. With just seven days left in the President’s term, this vote is not about timing. It is about principle and fidelity to our constitution. It concerns the clear and present danger facing our country, not only in these final days of the Trump administration, but in the weeks, months, and years, that will follow. It is about the necessity to demonstrate to this generation and to future generations. The duty we share to protect our democracy every single day.

Rep. Steny Hoyer: (15:00)
Do not pretend my friends, that it was simply those who came into the Capitol, encouraged by our President to stop the steal at any cost. And by the way, if the Vice President doesn’t do my bidding and follows the Constitution, sweep him away. We know that this President would never emulate George Washington and give up his power for the good of our Republic even after losing an election. Somebody talked about a peaceful transition. There has not been a peaceful transition. I don’t know what you’re talking about. You’re not living in the same country I am.

Rep. Steny Hoyer: (15:44)
It was just days ago that the President, after committing this terrible act thought he had to admit that Joe Biden might, yes, be President of the United States. We know that this President neither recognizes norms nor reflects the rule of law. We know that this President is not a Patriot. So I asked this house, who among us, Madam Speaker will be recorded on the role of history for their courage, their commitment, the Constitution, and their country.

Rep. Steny Hoyer: (16:19)
We do this today, not for politics. We don’t need this for politics. Georgia showed that there was no mistake in this election. We do this today to preserve and protect this great democracy. We do it for the America we love, our America, the beautiful whose founders sacrifices we praise in song, “Oh, beautiful for heroes proved in liberating strife, who more than self their country loved and mercy more than life.” Sadly, Madam Speaker, as our current President, the appropriate words would be who less than self his country loved and victory more than truth. Vote for this, for America, for our Constitution, for democracy, for history.