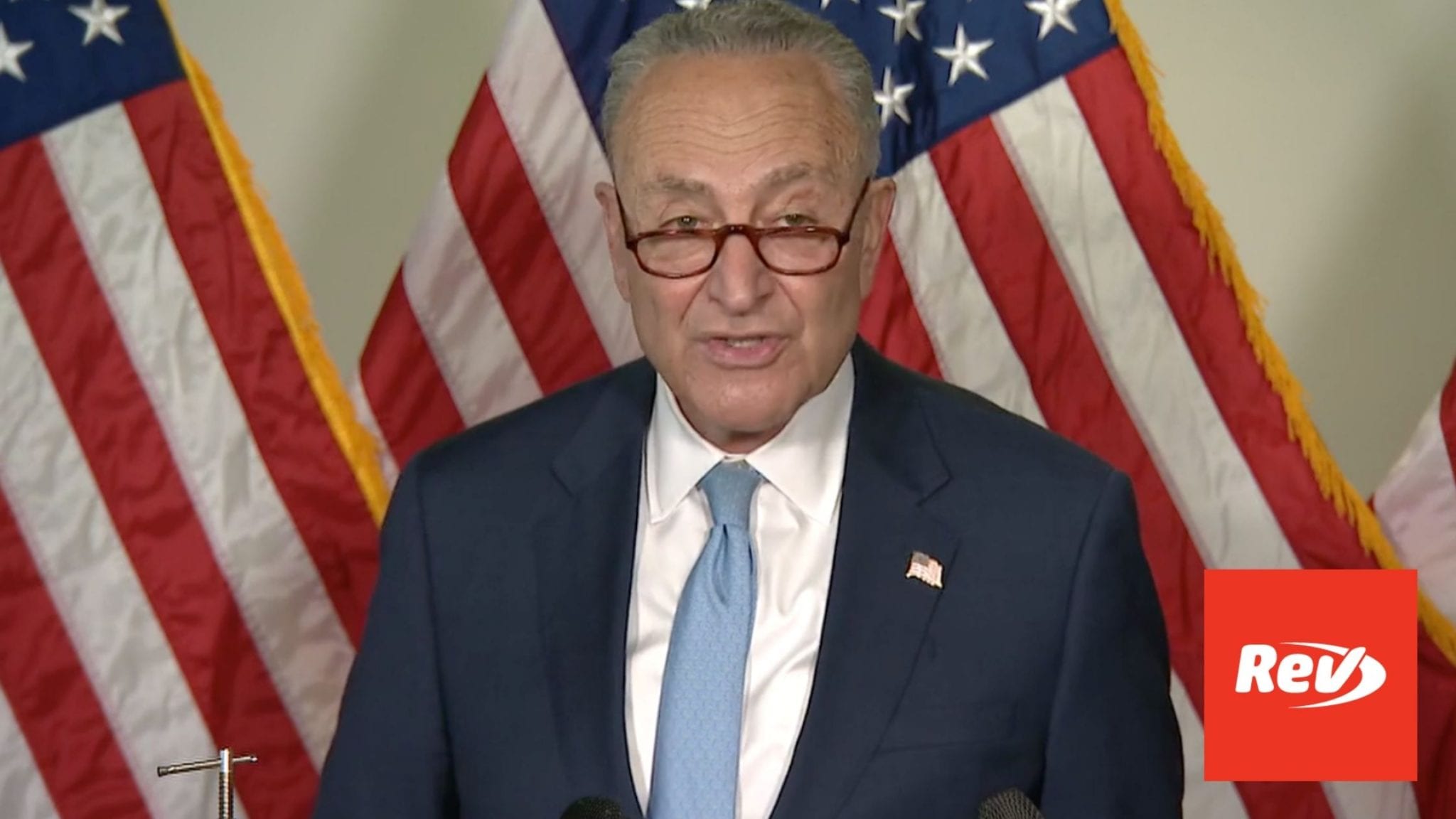 Senator Chuck Schumer: (00:01)
At least 50. Okay. I am glad to be joined by my colleagues, Senators Heinrich and King. Senator Carper was going to join us to talk about the Water Bill, but he has to be on the floor to speak about it. And Senator Duckworth will be joining us we think shortly, as will Senator Markey. And there he is. Okay. After one of the most difficult years in recent memory, the first 100 days of the Biden presidency and the new Senate Democratic Majority has seen the country turn a corner. Slowly but surely we are proving to the American people that government and the Senate can work for them. And we’re seeing shots and vaccines in people’s arms. We’re seeing money in their pockets. We’re seeing small businesses and restaurants open up. We have begun in a very good way, and this week is no exception.

Senator Chuck Schumer: (01:07)
We have a lot to do by the end of the week. We’ll confirm several more highly qualified nominees to the executive branch. Our Senate committees will continue holding hearings and markups on at least a dozen other nominees. The Senate will also consider two important bipartisan environmental infrastructure policies this week first, and Senator Carper couldn’t be here to talk about it. But he’s done a great job along with Ranking Member Capito and Senators Duckworth, who I think will be here and Cardin. And we’ll take up the Drinking Water and Wastewater Infrastructure Act of 2021. It passed through EPW with unanimous support. And what’s very interesting about it, and bodes well for some bipartisanship in Build Back Better, the plan that the Republican Senator sent to the President has almost the exact language that we are voting on, on the floor, so that’s a good thing.

Senator Chuck Schumer: (02:06)
And we have both sides of the aisle have an opportunity to do amendments, just as we did with the Anti-Hate Crimes Bill. On a topic as straightforward as this, I hope our Republican colleagues will cooperate so that we can move the bill quickly. We don’t need a lot of killer amendments, gotcha amendments, things not relevant to the bill, things just to delay. It’s going to pass and we want to get it done this week. Second, the second bill is a major, major victory for those of us who want to deal with global warming in a very strong way, and that is a vote on the Methane CRA. The three folks here surrounding me, Senators Heinrich, King, and Markey have worked very hard on this, and they’ll talk more about it. But it is a very important. I want to clear. The Methane CRA is a big deal.

Senator Chuck Schumer: (03:02)
The rule rather not only drew cheers from the environmental community, but also has the support of industry as well. It’s going to help us address the climate crisis in a major way. A ton of methane absorbs 86% more oxygen than a ton of carbon dioxide. The Senate will send a decisive message by reimposing these common sense rules to reduce methane emissions. Last week, President Biden set an ambitious goal for the U.S. to cut greenhouse gas emissions in half by the end of the decade. This is the first of many steps, many important steps, the Senate will take to achieve that goal. Senator Heinrich.

Senator Heinrich: (03:57)
Thank you, Leader Schumer. Why is this such a big deal? As he said, methane is 86 times more potent than CO2, but it doesn’t stick around that long in the atmosphere. So if we do this, if we stop venting, if we stop flaring, if we stopped leaking at the wellhead, if we stop leaking in the pipelines that connect the rest of the country, we can have an enormous impact on how much our atmosphere warms. And it was pretty instructive to me to look at the modeling and to see that between hydro fluorocarbons that Senator Carper led the charge on earlier this year and methane leakage we can take a huge chunk out of the global warming budget for the next few years. So this is an enormous opportunity. If you’re in industry, this is an opportunity to keep more of your product and sell more of your product. This is absolutely common sense. And my hope is it would be broadly bipartisan, because when you have so many of the world’s major oil and gas producers on the same side as the entire environmental community, you would think this would be a no brainer.

Senator King: (05:16)
Controlling methane is the low hanging fruit of combating climate change. It is the simplest, most direct, most cost-effective way that we can combat climate change, not 10 years from now, 15 years from now, or even five years from now, now. With the passage of the CRA tomorrow, which would repeal the repeal, we will have a significant regulatory regime on the release of methane into the atmosphere from drilling and from pipelines. As Senator Heinrich mentioned, this is supported by many in the industry. Not all, but many, for the simple reason, A, they think it’s effective, and two, it is cost-effective. This is not a high cost option. This is something that can be done at a reasonable cost, and the payback is enormous.

Senator King: (06:14)
So, really, this is a major bill. In fact, I would argue that if we can pass this tomorrow it would be the most significant climate change bill that we’ve passed around here in many years. It may seem like it’s this regulatory thing, CRA, but this is an enormous opportunity for this country to take a real solid demonstrable step on the issue of climate change and demonstrate international leadership that is so important to confronting the problem that is global in its scope. So I think this is a real opportunity, and I will introduce Senator Markey, who has been working on this subject forever. Yeah, since methane was first invented in the Lincoln administered.

Senator Markey: (07:10)
Thank you so much. And thank you, Leader Schumer, Senator Heinrich, Senator King for your great leadership on this issue. Methane is a silent killer. It is 86 times more powerful and damaging than CO2 over a 20-year period and an hour counts for more than one quarter of all global warming. Methane pollution is also a compounding problem. It helps form the ground level smog that we breathe, triggering asthma attacks, and aggravating other respiratory conditions that have already taken center stage amidst a global respiratory pandemic. Even last year with more cars off the road, and many stuck in their homes, methane pollution levels kept rising. We cannot talk about combating the climate crisis without reducing methane emissions. If we are going to put out the fire of the climate crisis, we have to stop lighting matches of methane pollution in our own country and then be the example for the rest of the world.

Senator Markey: (08:25)
But there are solutions, and first we have to enforce the Clean Air Act instead of undermining it. It was for the last four years something that Donald Trump tried to roll back. We now have a President and a Congress that believes in science and this vote on the CRA is something that is going to put science back again. And second, we have to push our methane emissions down even further and faster than ever before. So we have a real chance here because the fossil fuel industry knows that for a very little amount of money, it can cap these methane emissions and it can ultimately be profitable to them. In other words, they can actually pay for the capping of the methane by then their use of the methane as a commercial product. And they know it, and we have an excellent chance here to win this CRA and I can’t thank our leaders here for all the work that they have done.

Speaker 5: (09:30)
[crosstalk 00:09:30] this week, the President is laying out another economic plan, the Family Plan. I’m jus trying to get a sense of what’s your vision for processing this. Are you going to do this all this year in addition to the infrastructure and other proposals?

Senator Chuck Schumer: (09:41)
Look, we want to get as big and bold action as we can get and we’ll wait for the President to lay out his plan. But we want to get, as, as I said, this country is demanding, the average American needs to feel that they have a really bright and sunny future, something they haven’t felt in a while. And as big a bold plan as we can get, we’re going to get.

Speaker 6: (10:07)
Senator Schumer. Your Endless Frontier Act was pulled from a Congress committee markup yesterday [inaudible 00:10:11] after more than 200 amendments were added to the bill. Do you have a sense of which pieces of the legislation your colleagues want to change or have concerns?

Senator Chuck Schumer: (10:19)
There’s lots of amendments. This is a broad comprehensive bill and it’s brand new. We’re encouraged that there were 200. They’re bipartisan amendments. They’re constructive amendments. Both Senator Cantwell, our Chair, and Senator Wicker, our ranking member, want to work through those amendments and come up with a bipartisan bill. And we believe that will be marked up when we get back and we will put it on the floor in May.

Speaker 7: (10:43)
Obviously, the operations [inaudible 00:10:45] are going to be different from a safety security standpoint protocol, health, and hygiene. Have they talked to Senators at all as to whether or not they will have to pass through the magnetometers to get into the House Chamber?

Senator Chuck Schumer: (10:57)
I’ll have to get you the details on that. Well, I have been informed of all the security that is being there. I feel very safe being there. I’ve told my colleagues that, and they’re doing a very good job. There’s lots of different levels of security, but I don’t know the specific answers to your question.

Speaker 7: (11:21)
Well, former. What do you think of the bill just introduced by Senator Markey to expand the Supreme Court. Do you have any thoughts on it. Are you open to it?

Senator Chuck Schumer: (11:28)
Look, the bottom line is that I am waiting to hear what President Biden’s commission says about the Supreme Court, and they’re going to look at many different aspects.

Senator Chuck Schumer: (11:51)
Yep. Senator Murphy is making good progress talking and trying to get some Republican support for that bill. And we hope there’s a path forward that can actually pass, but we will put gun legislation on the floor, period. Yes.

Speaker 9: (12:14)
Drug pricing a priority when they consider The Family Plan.