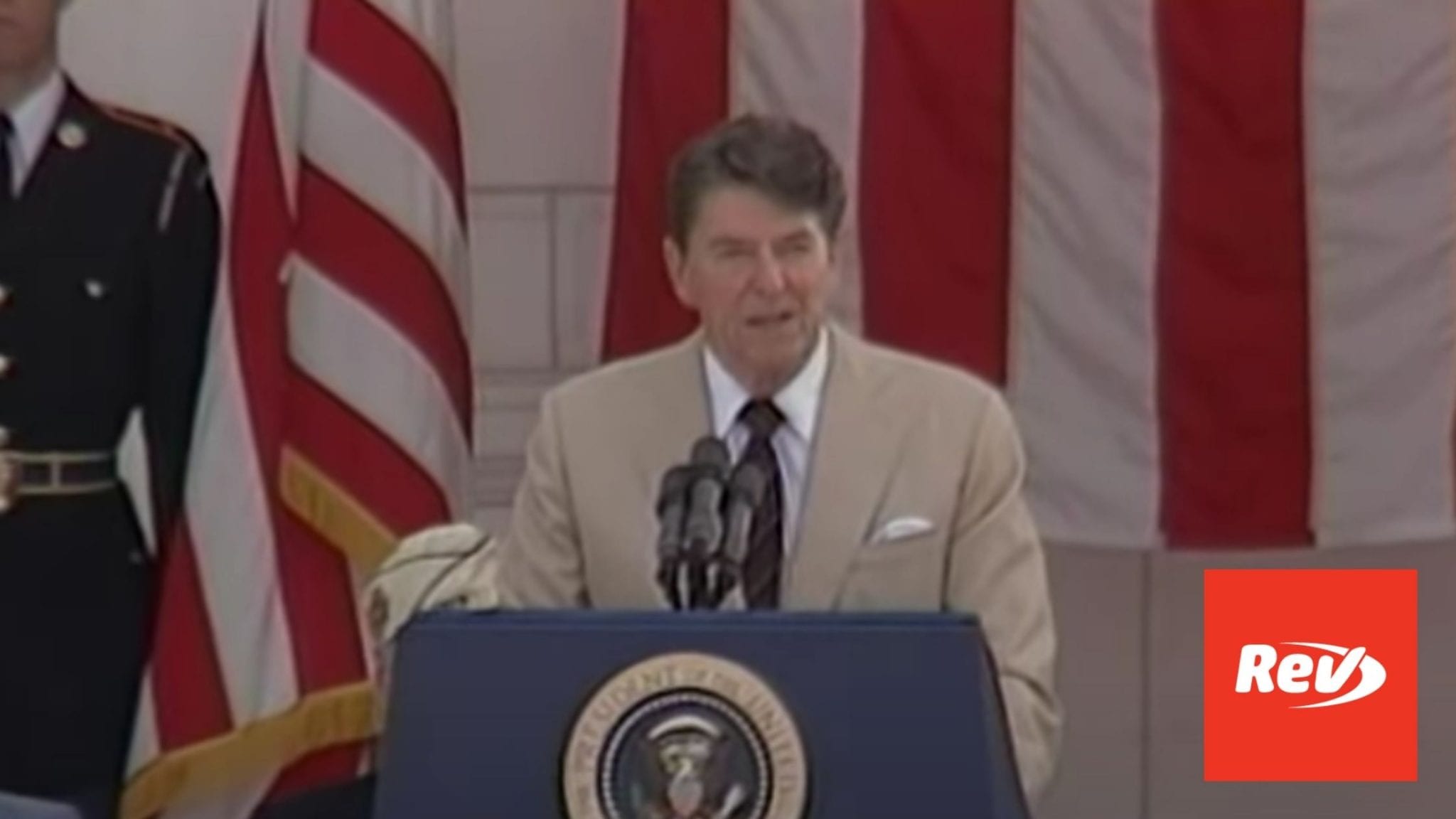 President Ronald Reagan’s Memorial Day speech at Arlington Cemetery on May 31, 1982. Read the transcript of the speech here.

Ronald Reagan: (01:08)
Mr. President, General, the distinguished guest here with us today, my fellow citizens. In America, cities and towns today flags will be placed on graves in cemeteries, public officials will speak of the sacrifice and the valor of those whose memory we honor. In 1863, when he dedicated a small cemetery in Pennsylvania, marking a terrible collision between the armies of North and South, Abraham Lincoln noted the swift obscurity of such speeches.

Ronald Reagan: (01:45)
Well, we know now that Lincoln was wrong about that particular occasion, his remarks commemorating those who gave their last full measure of devotion were long remembered. But since that moment at Gettysburg, few other such addresses have become part of our national heritage. Not because of the inadequacy of the speakers, but because of the inadequacy of words. I have no illusions about what little I can add now to the silent testimony of those who gave their lives willingly for their country. Words are even more feeble on this Memorial Day, for the site before us is that of a strong and good nation that stands in silence and remembers those who were loved and who in return loved their countrymen enough to die for them. Yet, we must try to honor them, not for their sakes alone, but for our own. And if words cannot repay the debt we owe these men, surely with our actions, we must strive to keep faith with them and with a vision that led them to battle and a final sacrifice.

Ronald Reagan: (02:53)
Our first obligation to them and ourselves is plain enough. The United States and freedom for which it stands, the freedom of which they died must endure and prosper. Their lives remind us that freedom is not bought cheaply, it has a cost. It imposes a burden. And just as they, when we commemorate, were willing to sacrifice, so too must we, in a less final, less heroic, way be willing to give of ourselves. It is this beyond the controversy and the congressional debate, beyond the blizzard of budget numbers and the complexity of modern weapon systems that motivates us in our search for security and peace. War will not come again, other young men will not have to die if we will speak honestly of the dangers that confront us and remain strong enough to meet those dangers.

Ronald Reagan: (04:00)
It’s not just strength or courage that we need, but understanding and a measure of wisdom as well. We must understand enough about our world to see the value of our alliances. We must be wise enough about ourselves to listen to our allies, to work with them, to build and strengthen the bonds between us. Our understanding must also extend to potential adversaries. We must strive to speak of them, not belligerently, but firmly and frankly. And that’s why we must never failed to note as frequently as necessary the true the wide gulf between our codes of morality. And that’s why we must never hesitate to acknowledge the irreputable difference between our view of man as master of the state and their view of man as servant of the state. Nor must we ever underestimate the seriousness of their aspirations to global expansion. The risk is the very freedom that has been so dearly won.

Ronald Reagan: (04:58)
It is this honesty of mind that can open paths to peace, that can lead to fruitful negotiation, that can build a foundation upon which treaties between our nations can stand and last. Treaties that can someday bring about a reduction in the terrible arms of destruction. Arms that threatened us with war even more terrible than those that have taken the lives of the Americans we honor today. In the quest for peace, the United States has proposed to the Soviet Union that we reduce the threat of nuclear weapons by negotiating a stable balance at far lower levels of strategic forces.

Ronald Reagan: (05:48)
This is a fitting occasion to announce that, START, as we call it, strategic arms reductions. The negotiations between our country and the Soviet union will begin on the 29th of June. As for existing strategic arms agreements, we will refrain from actions which undercut them so long as the Soviet union shows equal restraint. With goodwill and dedication on both sides, I pray that we will achieve a safer world.

Ronald Reagan: (06:37)
Our goal is peace. We can gain that peace by strengthening our alliances, by speaking candidly of the dangers before us, by assuring potential adversaries of our seriousness, by actively pursuing every chance of honest and fruitful negotiation. It is with these goals in mind that I will depart Wednesday for Europe, and it’s all together fitting that we have this moment to reflect on the price of freedom and those who have so willingly paid it. For however important, the matters of state before us this next week, they must not disturb the solemnity of this occasion. Nor must they dilute our sense of reverence and the silent gratitude we hold for those who are buried here.

Ronald Reagan: (07:25)
The willingness of some to give their lives so that others might live never fails to evoke in us a sense of wonder and mystery. One gets that feeling here on this hallowed ground. And I have known that same poignant feeling as I looked out across the rows of white crosses and Stars of David in Europe, in the Philippines, in the military cemeteries here in our own land. Each one marks the resting place of an American hero. And in my lifetime, the heroes of World War I, the Doughboys, the GIs of World War II, or Korea or Vietnam. They span several generations of young Americans, all different and yet all alike, like the markers of above their resting places. All alike in a truly meaningful way.

Ronald Reagan: (08:23)
Winston Churchill’s set of those he knew in World War II, they seem to be the only young men who could laugh and fight at the same time. A great general in that war called them our secret weapon, just the best darn kids in the world. Each died for a cause he considered more important than his own life. Well, they didn’t volunteer to die, they volunteered to defend values for which men have always been willing to die if need be. The values, which make up what we call civilization and how they must have wished in all the ugliness that war brings that no other generation of young men to follow would have to undergo that same experience.

Ronald Reagan: (09:10)
As we honor their memory today, let us pledge that their lives, their sacrifices, their valor, shall be justified and remembered for as long as God gives life to this nation. And let us also pledge to do our utmost to carry out what must have been their wish, that no other generation of young men will ever have to share their experiences and repeat their sacrifice.

Ronald Reagan: (09:39)
Earlier today, with the music that we have heard and that of our national anthem, I can’t claim to know the words of all the national anthems in the world, but I don’t know of any other but ends with a question and a challenge as our does. Does that flag still wave over the land of the free and the home of the brave? That is [inaudible 00:10:11]. Thank you.