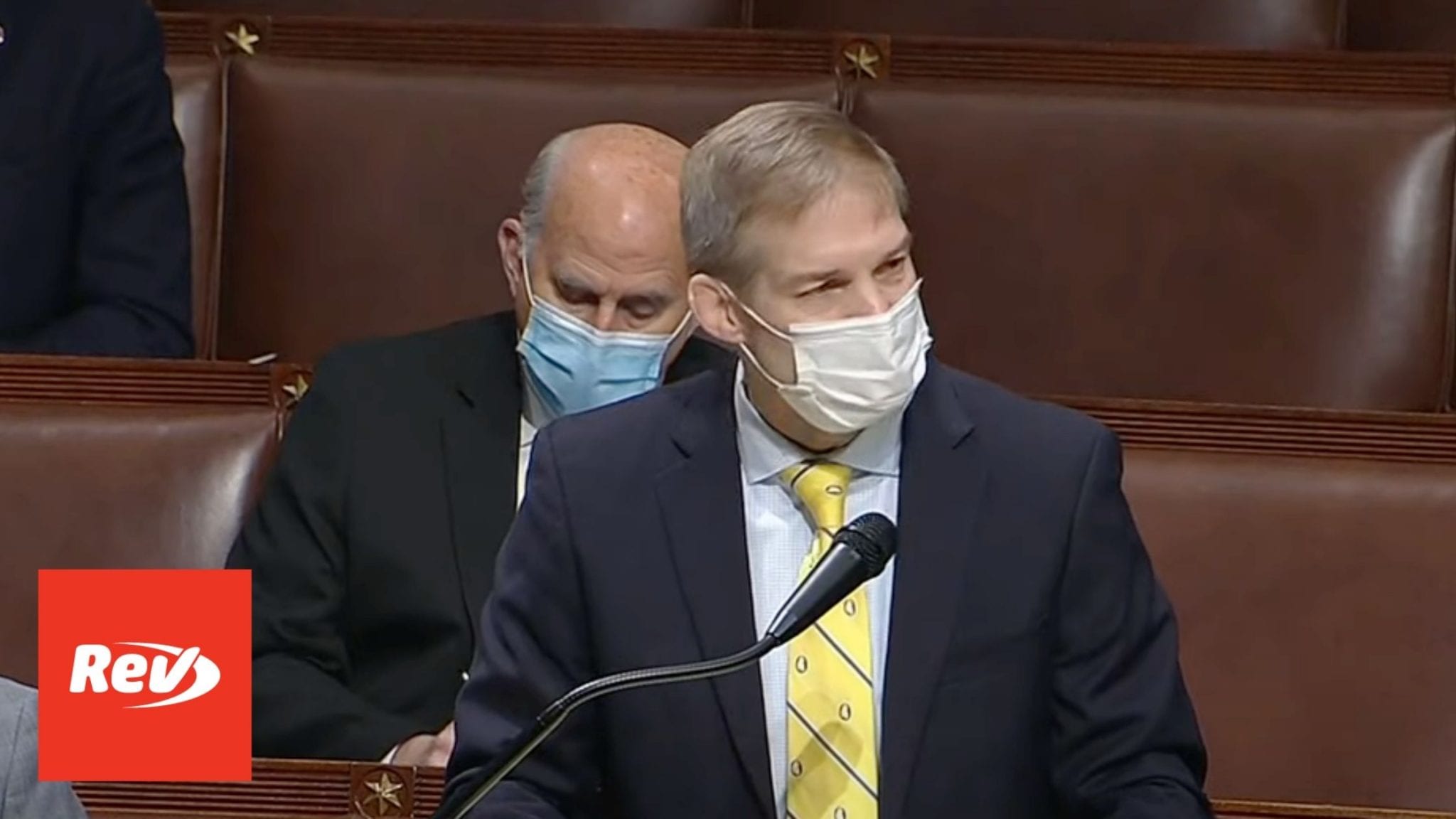 Representative Jim Jordan gave a speech on the House floor as the House of Representatives debated the second impeachment of President Donald Trump on January 13.

Jim Jordan: (00:33)
This doesn’t unite the country. There’s no way this helps the nation deal with the tragic and terrible events of last week that we all condemn, and Republicans have been consistent. We’ve condemned all the violence, all the time. We condemned it last summer. We condemned it last week. We should be focused on bringing the nation together. Instead, Democrats are going to impeach the President for a second time, one week, one week before he leaves office.

Jim Jordan: (01:01)
Why? Why? Politics and the fact that they want to cancel the President. The President who cut taxes. The President who reduced regulations. The President, prior to COVID, had the greatest economy, lowest unemployment in 50 years. The President who got us out of the Iran deal, put the embassy in Jerusalem, brought hostages home from North Korea. Put three great justices on the Supreme Court, gave us a new NAFTA agreement. The Abraham Accords, the COVID vaccine, and who built the wall.

Jim Jordan: (01:30)
It’s about politics. This is about getting the president of the United States. They spied on his campaign before he was elected, 19 minutes into his presidency they started the impeachment push three-year Mueller investigation, 19 lawyers, 40 agents, 500 witnesses, 2,500 subpoenas, $40 million to find nothing. Impeachment round one, based on an anonymous whistleblower with no firsthand knowledge who was biased against the President and who worked for Joe Biden. Now, it’s impeachment round two.

Jim Jordan: (02:04)
It’s always been about getting the President no matter what. It’s an obsession. An obsession that has now broadened. It’s not just about impeachment anymore. It’s about canceling, as I’ve said. Canceling the President and anyone that disagrees with them. The Ayatollah can tweet, the President can’t. Democrats can object on January 6th, 2017, but Republicans aren’t allowed to object on January 6th, 2021. Democrats say, “ANTIFA is a myth.” Republicans condemn all violence, all the time.

Jim Jordan: (02:57)
Because if it continues, it won’t just be Republicans who get canceled. It won’t just be the President of the United States. The cancel culture will come for us all.

Jim Jordan: (03:09)
America’s a great country, the greatest country ever. It seems to me, we need to think about how great the people of this nation really are. Think about what we’ve accomplished in the past and begin to come together, as leaders who represent so many great folks across our districts. Think about this. Think about this, in 1903, Kitty Hawk, North Carolina, two guys fly this thing they called a plane 100 feet, barely got off the ground, barely got off the ground. Amazing thing.

Jim Jordan: (03:43)
44 years later, Chuck Yeager breaks the sound barrier. In 44 years, we go from two guys flying a contraption they call it a plane, a few 100 feet, to Chuck Yeager breaking the sound barrier. And 22 years after that, 22 years after that, another American steps on the moon. Think about it. In one lifetime. In 66 years, two guys flying 100 feet to putting a man on the moon. That’s what this country is capable of. That’s what we can do.

Jim Jordan: (04:14)
And we, as the Congress who represent the people who did that, should start leading. Should start understanding what really is going on here. So I hope, I hope we defeat this. I hope we can begin to come together and recognize the greatness of the American people and focus on the things they want us to focus on.

Speaker 3: (04:37)
Hey, NBC news, viewers, thanks for checking out our YouTube channel. Subscribe by clicking on that button down here, and click on any of the videos over here to watch the latest interviews, show highlights, and digital exclusives. Thanks for watching.