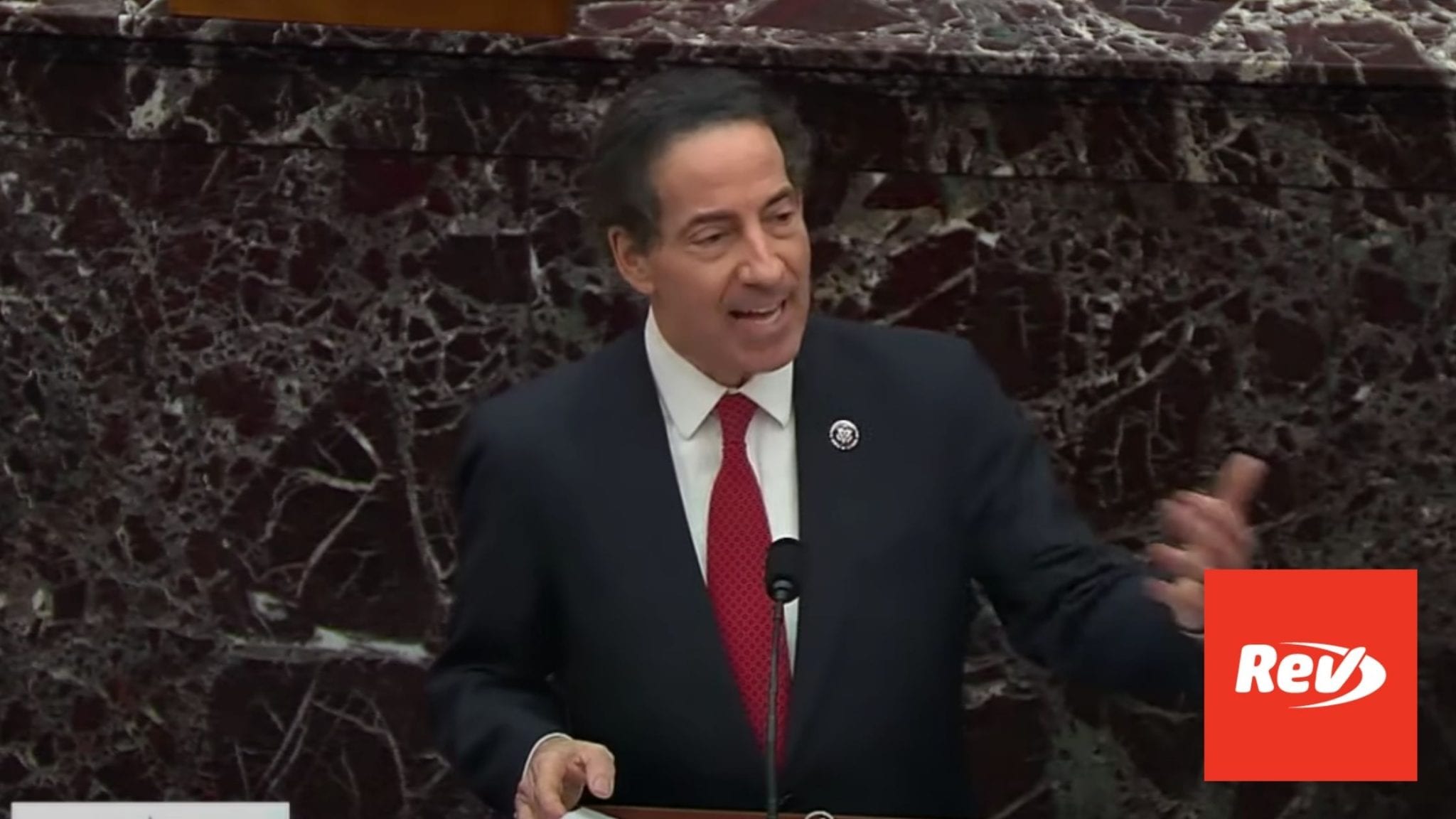 Transcript of impeachment manager Rep. Jamie Raskin’s opening statement on February 9, 2021, the first day of Trump’s second impeachment trial. He defended the constitutionality of the trial. Read the transcript of his opening argument remarks here.

Rep Jamie Raskin: (00:02)
Thank you very much, Mr. President, distinguished members of the Senate. Good afternoon. My name is Jamie Raskin. It’s my honor to represent people of Maryland’s 8th congressional district in the House, and also to serve as the lead House manager. And Mr. President, we will indeed reserve time for rebuttal. Thank you.

Rep Jamie Raskin: (00:22)
Because I’ve been a professor of constitutional law for three decades, I know there are a lot of people who are dreading endless lectures about the Federalist Papers here. Please breathe easy. Okay? I remember well, W. H. Auden’s line that a professor is someone who speaks while other people are sleeping.

Rep Jamie Raskin: (00:41)
You will not be hearing extended lectures from me because our case is based on cold, hard facts. It’s all about the facts. President Trump has sent his lawyers here today to try to stop the Senate from hearing the facts of this case. They want to call the trial over before any evidence is even introduced. Their argument is that if you commit an impeachable offense in your last few weeks in office, you do it with constitutional impunity. You get away with it. In other words, conduct that would be a high crime and misdemeanor in your first year as president and your second year as president and your third year as president and for the vast majority of your fourth year as president, you can suddenly do in your last few weeks in office without facing any constitutional accountability at all. This would create a brand new January exception to the Constitution of the United States of America. A January exception.

Rep Jamie Raskin: (02:08)
And everyone can see immediately why this is so dangerous. It’s an invitation to the President to take his best shot at anything he may want to do on his way out the door, including using violent means to lock that door, to hang onto the Oval Office at all costs, and to block the peaceful transfer of power. In other words, the January exception is an invitation to our founder’s worst nightmare. And if we buy this radical argument that President Trump’s lawyers advance, we risk allowing January 6th to become our future. And what will that mean for America? Think about it. What will the January exception mean to future generations if you grant it?

Rep Jamie Raskin: (03:07)
And if the President’s arguments for a January exception are upheld, then even if everyone agrees that he’s culpable for these events, even if the evidence proves, as we think it definitively does, that the President incited a violent insurrection on the day Congress met to finalize the presidential election, he would have you believe there is absolutely nothing the Senate can do about it. No trial, no facts. He wants you to decide that the Senate is powerless at that point. That can’t be right.

Rep Jamie Raskin: (03:47)
The transition of power is always the most dangerous moment for democracies. Every historian will tell you that. We just saw it in the most astonishing way. We lived through it. And you know what? The framers of our Constitution knew it. That’s why they created a Constitution with an oath written into it that binds the President from his very first day in office until his very last day in office, and every day in between. Under that Constitution and under that oath, the President of the United States is been in to commit high crimes and misdemeanors against the people at any point that he’s an office. Indeed, that’s one specific reason the impeachment, conviction, and disqualification powers exists, to protect us against presidents who try to overrun the power of the people in their elections and replace the rule of law with the rule of mobs. These powers must apply even if the President commits his offenses in his final weeks in office. In fact, that’s precisely when we need them the most because that’s when elections get attacked.

Rep Jamie Raskin: (05:08)
Everything that we know about the language of the Constitution, the framers’ original understanding and intent, prior Senate practice, and common sense confirms this rule. Let’s start with the text of the Constitution, which in article one, section two gives the House the sole power of impeachment when the President commits high crimes and misdemeanors. We exercised that power on January 13th. The President, it is undisputed, committed his offense while he was president. And it is undisputed that we impeached him while he was president. There can be no doubt that this is a valid and legitimate impeachment, and there can be no doubt that the Senate has the power to try this impeachment. We know this because article one, section three gives the Senate the sole power to try all impeachments. The Senate has the power, the sole power, to try all impeachments.

Rep Jamie Raskin: (06:19)
All means all. There are no exceptions to the rule. Because the Senate has jurisdiction to try all impeachments, it most certainly has jurisdiction to try this one. It’s really that simple. The vast majority of constitutional scholars, who’ve studied the question and weighed in on the proposition being advanced by the President, this January exception, hereto for unknown, agree with us. And that includes the nation’s most prominent conservative legal scholars, including former 10th Circuit Judge, Michael McConnell, the co-founder of the Federalist Society, Stephen Calabresi, Ronald Reagan’s Solicitor General, Charles Fried, Luminary Washington lawyer, Charles Cooper, among hundreds of other constitutional lawyers and professors. I commend the people I named, their recent writings to you in the newspapers over the last several days.

Rep Jamie Raskin: (07:19)
And all of the key precedents, along with detailed explanation of the constitutional history and textual analysis, appear in the trial brief we filed last week and the reply brief that we filed very early this morning. I’ll spare you a replay, but I want to highlight a few key points from constitutional history that strike me as compelling in foreclosing President Trump’s argument that there’s a secret January exception hidden away in the Constitution.

Rep Jamie Raskin: (07:47)
The first point comes from English history, which matters because as Hamilton wrote England provided the model from which the idea of this institution has been borrowed. And it would have been immediately obvious to anyone familiar with that history that former officials could be held accountable for their abuses while in office. Every single impeachment of a government official that occurred during the framers’ lifetime concerned a former official. A former official.

Rep Jamie Raskin: (08:21)
Indeed, the most famous of these impeachments occurred while the framers gathered in Philadelphia to write the Constitution. It was the impeachment of Warren Hastings, the former Governor General of the British colony of Bengal, and a corrupt guy. The framers knew all about it, and they strongly supported the impeachment. In fact, the Hastings case was invoked by name at the convention. It was the only specific impeachment case that they discussed at the convention. It played a key role in their adoption of the high crimes and misdemeanors standard. Even though everyone there surely knew that Hastings had left office two years before his impeachment trial began, not a single framer, not one raised a concern when Virginia and George Mason held up the Hastings impeachment as a model for us in the writing of our Constitution.

Rep Jamie Raskin: (09:16)
The early state Constitutions supported the idea too. Every single state Constitution in the 1780s either specifically said that former officials could be impeached or were entirely consistent with the idea. In contrast, not a single state Constitution prohibited trials of former officials. As a result, there was an overwhelming presumption in favor of allowing legislatures to hold former officials accountable in this way. Any departure from that norm would have been a big deal. And yet there’s no sign anywhere that that ever happened. Some states, including Delaware, even confined impeachment only to officials who had already left office. This confirms that removal was never seen as the exclusive purpose of impeachment in America. The goal was always about accountability, protecting society, and deterring official corruption.

Rep Jamie Raskin: (10:18)
Delaware matters for another reason. Writing about impeachment and the Federalist Papers, Hamilton explained that the President of America would stand upon no better ground than a governor of New York and upon a worse ground than the governors of Maryland and Delaware. He thus emphasized that the President is even more accountable than officials in Delaware, whereas I noted the Constitution clearly allowed impeachment of former officials. And nobody involved in the convention ever said that the framers meant to reject this widely accepted, deeply rooted understanding of the word impeachment when they wrote it into our Constitution.

Rep Jamie Raskin: (10:56)
The convention debates instead confirm this interpretation. There, while discussing impeachment, the framers repeatedly returned to the threat of presidential corruption aimed directly to elections, the heart of self-government. Almost perfectly anticipating President Trump, William Davie of North Carolina explained impeachment was for a president who speared, “no effort or means whatever to get himself reelected.” Hamilton in Federalist One said, “The greatest danger to republics and the liberties of the people comes from political opportunists who began as demagogues and end as tyrants, and the people who are encouraged to follow them.”

Rep Jamie Raskin: (11:47)
President Trump may not know a lot about the framers, but they certainly knew a lot about him. Given the framers’ intense focus on danger to elections and the peaceful transfer of power, it is inconceivable that they designed impeachment to be a dead letter in the President’s final days in office, when opportunities to interfere with the peaceful transfer of power would be most tempting and most dangerous as we just saw. Thus, as a matter of history and original understanding, there is no merit to President Trump’s claim that he can incite an insurrection and then insist weeks later that the Senate lacks the power to even hear evidence at a trial, to even hold a trial.

Rep Jamie Raskin: (12:35)
The true rule was stated by former President John Quincy Adams when he categorically declared, “I hold myself so long as I have the breath of life in my body amenable to impeachment by the House for everything I did during the time I held any public office.” When he comes up in a minute, my colleague, Mr. Neguse of Colorado, will further pursue the relevant Senate precedents and explain why this body’s practice has been supported by the text of the Constitution. And Mr. Cicilline of Rhode Island will then respond to the fallacies presented by the President’s council. And after these gentlemen speak, I will return to discuss the importance, the fundamental importance of the Senate rejecting President Trump’s argument for the preservation of democratic self-government and the rule of law in the United States of America.