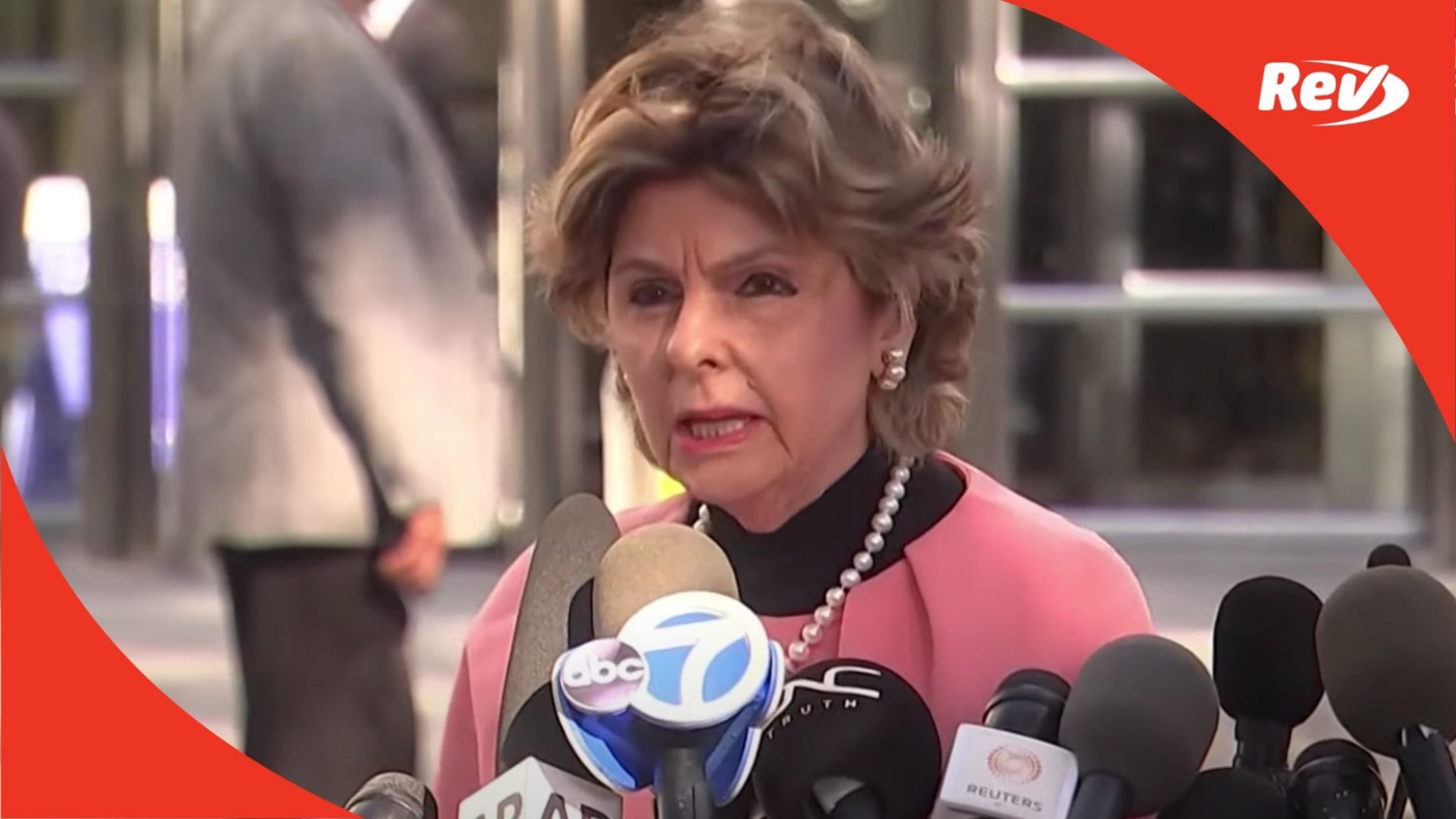 R. Kelly was found guilty of all racketeering and sex trafficking charges on September 27, 2021. Gloria Allred held a press conference with U.S. attorneys after the verdict. Read the transcript of the news briefing here.

Gloria Allred: (10:43)
… of Reverend Martin Luther King, Jr. in any discussion of R. Kelly, a dangerous sexual predator who was harmed so many women and underage girls. The defense also argued that Mr. Kelly treated his victims “like gold.” Targeting them, recruiting them, isolating them from their family and friends, forcing them to follow his abusive rules in order to control them, punishing them if they did not follow his rules to the letter, hitting them, threatening them, sexually assaulting them, giving many of them genital herpes and victimizing them by recording many of them on child pornography tapes is not treating them like gold. R. Kelly thought that he could get away with all of this, but he didn’t. Because despite the fact that he thought he could control all of his victims, he was wrong.

Gloria Allred: (11:40)
Many of his victims had the courage to speak up and tell their truth under oath, in a court of law. I am very proud of my clients who agreed to testify in this case. I thank them for trusting the law enforcement and the jury to find the truth. My clients who testified fought through their fear and relived their painful experiences with R. Kelly and his enablers. R. Kelly’s victims handled themselves with dignity and survived intense cross-examination by the defense. Because of their courage and the outstanding work of federal agents and prosecutors in this case, justice has been done. Let this be a message to other celebrities who also use their fame to prey on their fans and others who are unfortunate enough to come into contact with them. You’re also likely to face serious consequences for your criminal conduct. The issue is not if the law will catch up to you. The only question is when.

Gloria Allred: (12:50)
I also have a very short statement from one of my clients and that’s Sonia. I know that she is happy with the verdict that Mr. Kelly has been convicted and thankful that the jury listened to her and to the rest of the witnesses. She says, “I’ve been hiding from Robert Kelly in fear due to threats made against me and I’m ready to start living my life free from fear and to start the healing process. I want to thank the jury for considering the evidence and truly listening to my testimony. I want to thank the US attorney’s office and the federal prosecutors in this case. Thank you for shining a light and helping me to get out from under that rock that I stayed under for far too long. Also, thank you to the federal agents who have listened to my story and for all that you have done to protect myself and others over the last two years. If you’ve been in a similar situation, I urge you to come forward as well. It will be like a weight lifted off of your shoulders. No one should have to live like that.”

Gloria Allred: (14:13)
Well, since the verdict was just announced, I’ve not had a chance to consult with all of them, but I know that a number of them feel that if he’s been convicted of any crimes, whether or not it was crimes for which he was charged in reference to them, they’re happy that he’s convicted.

Gloria Allred: (14:42)
Are they upset that it’s taken this long for things to happen? Well, they understand that justice moves at a glacial pace. It’s not like it is on television, which I’ve said many times. Everything doesn’t happen within one hour.

Speaker 3: (15:21)
There was doubt in their decision with your client.

Speaker 5: (15:38)
The United States attorney for the Eastern District is going to speak, and then she’ll be followed by special agent in charge, Homeland Security Investigations. I’ll give you the US attorney’s name first. It’s Jacquelyn, J-A-C-Q-U-E-L-Y-N, Kasulis, is K-A-S-U-L-I-S. US attorney, Eastern District of New York. Acting US-

Speaker 5: (16:03)
… U.S. Attorney Eastern District of New York, Acting U.S. attorney Eastern District of New York, and she’ll be followed by Peter Fitzhugh, F-I-T-Z-H-U-G-H, Special Agent-in-Charge, Homeland Security Investigations. They’re not going to take any questions because the defendant still has to be sentenced. We have a podium here that I’d like to put up. Can you raise this mic stand a little bit? Is the podium going to get in the way of the mics?

Speaker 5: (16:35)
All right, because I’m going to bring over that podium so they can put some papers down in front of it.

Jacquelyn Kasulis: (17:40)
Good afternoon, everyone. My name is Jacquelyn Kasulis and I am the Acting U.S. Attorney here in the Eastern District of New York. Today’s guilty verdict forever brands R. Kelly as a predator who used his fame and fortune to pray on the young, the vulnerable, and the voiceless for his own sexual gratification. A predator who used his inner circle to ensnare underage girls and young men and women for decades, an assorted web of sex abuse, exploitation, and humiliation. To the victims in this case, your voices were heard and justice was finally served. This conviction would not have been possible without the bravery and resilience of R. Kelly’s victims. I applaud their courage in revealing in open court the painful, intimate, and horrific details of their lives with him. No one deserves what they experienced at his hands or the threats and harassment they faced in telling the truth about what happened to them. We hope that today’s verdict brings some measure of comfort and closure to the victims.

Jacquelyn Kasulis: (19:13)
This conviction is the latest in a long line of prosecutions by this office to protect women and vulnerable minors from sexual predators. Today’s result was made possible by the outstanding work, dedication, and skill of the prosecution team, AUSA’s Elizabeth Geddes, Nadia Shihata, and Maria Cruz Melendez, and Senior Investigator Keith Kolovich and Paralegal Specialists, [Kira Wenton and Alyssa Fegel 00:19:46]. Their grace under pressure was truly extraordinary. I want to commend and thank the Special Agents [Ryan Shabo and Silvet Renoso 00:20:01] of the Department of Homeland Security Investigations under the supervision of Supervisory Special Agent Alvin Hernandez for their outstanding work on the case, along with detectives from the New York City Police Department. Together, this superb team spent countless hours over years to sort through records and documents and interviewing hundreds of witnesses to painstakingly marshal the facts and build a strong case.

Jacquelyn Kasulis: (20:36)
I also want to thank the U.S. Attorney’s Office, the Northern District of Illinois, and Cook County State’s Attorney’s Office for its assistance. Last but not least, I want to thank the men and women of the jury for their time and attention throughout the trial and for their careful assessment of the overwhelming evidence in this case. In rendering its verdict today, the jury delivered a powerful message to men like R. Kelly. No matter how long it takes, the long arm of the law will catch up with you. I will now turn over the microphone to HSI Special Agent-in-Charge, Peter Fitzhugh. You thank you.

Peter Fitzhugh: (21:33)
Good afternoon, everyone. My name is Pete Fitzhugh and I’m the Special Agent-in-Charge for Homeland Security Investigations here in New York. Before I begin my remarks, I’d like to quickly thank Acting United States Attorney for EDNY, Jacquelyn Kasulis, and her amazing team of prosecutors. Today’s verdict brings an end to Robert Kelly’s decade long reign of terror over many vulnerable girls, boys, and young women. With this verdict, it is my sincere hope that it will also begin the healing process for these brave survivors. Today’s decision demonstrates that our system of justice knows no boundaries and will hold criminals accountable regardless of their fame or fortune. Mr. Kelly once said, “I’m no angel, but I’m no monster either.” I wholeheartedly disagree with that.

Peter Fitzhugh: (22:27)
The investigative and prosecution team spent months conducting hundreds of interviews, analyzing documentary and electronic evidence, all of which confirmed the true depravity of Mr. Kelly. For years, Mr. Kelly believed that his power and fame could defy the justice system and allow him to continue his abuse. Today, a jury of Mr. Kelly’s peers confirmed what these courageous victims have known for far too long, Kelly is a prolific serial predator. Despite numerous reports of his destructive abuse over the years, Mr. Kelly’s brazen acts of intimidation against his accusers kept him shielded from prosecution. Mr. Kelly had the audacity to engage with his associates to bribe and threaten victims, their families, and witnesses all in an effort to prevent the truth from being told.

Peter Fitzhugh: (23:24)
Make no mistake, these actions by Mr. Kelly and his associates were not only designed to hide the truth, but also to keep and continue his destructive ways against the young and vulnerable. In their failed attempt to evade justice, Mr. Kelly and his associates made one critical error, they underestimated the resilience and courage of the victims who refused to be silenced. He believed that his fame would drown out the voices, that they would not be believed, and that his notoriety would deter tenacious investigators and prosecutors from taking up their cause. These victims overcame Mr. Kelly’s abuse. They deserve to be recognized.

Peter Fitzhugh: (24:03)
These victims overcame Mr. Kelly’s abuse. They deserve to be recognized. Know this. We stand here today because of them. Without them, today would not have been accomplished. Today is their day. HSI and our partners at EDNY take a victim-centric approach to investigations, ensuring that we swiftly focus our efforts on those most impacted by the crime. With this in mind, I truly believe that in light of the great bravery of these victims and their advocates, it would be much more appropriate to call them survivors, as they refuse to remain victims.

Peter Fitzhugh: (24:35)
As we think about the survivors, I would like to take a few moments to speak publicly about the work HSI special agents and our partners performed on their behalf. A lot has been said about the relationship between law enforcement and the communities we serve. Today is a reminder of our profession’s highest calling, to protect the public against oppressors. Today’s verdict was not inevitable. It was only possible because these survivors placed their trust in law enforcement. They believe that agents and prosecutors would diligently seek out the truth and bring Mr. Kelly to justice. For that, you have my utmost respect and admiration. Today, we stand United with the survivors and our community with one simple goal in mind: Mr. Kelly and others like him will never again be in a position to abuse others. Together, we will continue this work to make certain that one day, days like today won’t be necessary. Thank you.