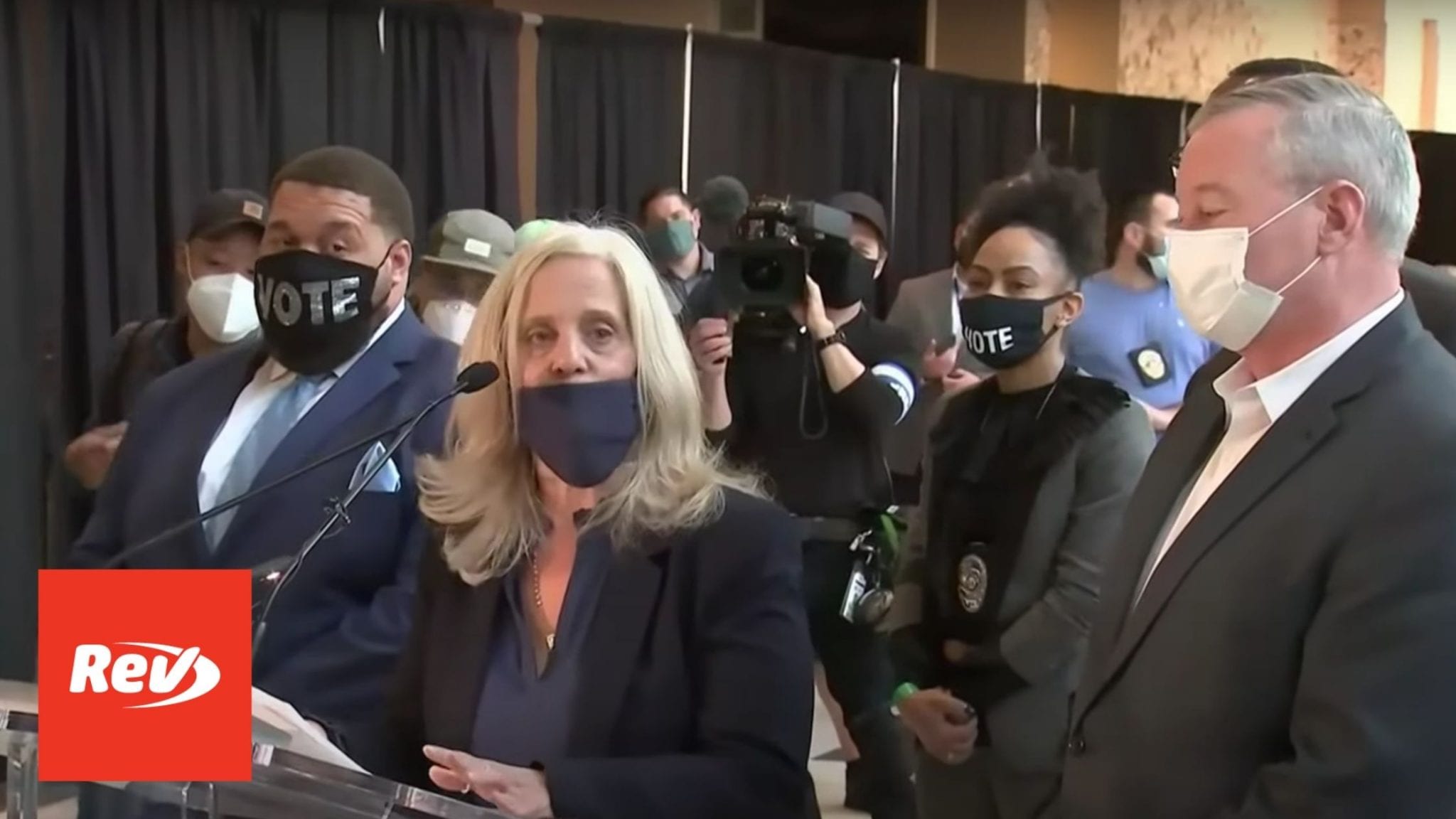 Philadelphia, PA city commissioners held a press conference on November 6 to provide updates on the vote counting. Read the transcript of the news briefing here.

Mayor Jim Kenney: (05:11)
This week, the eyes of the nation and the world were here in Philadelphia. And I’m proud to say that Philadelphia showed up. Our residents turned out in large numbers. They mailed In ballots in this, an unprecedented condition, during a global pandemic. They stood in line with neighbors to cast their vote in person, and they have exhibited tremendous patience as they continue to wait for our election staff to count every single vote. I want to personally thank City Commissioners, Lisa Deeley, Al Schmitt, and Omar Sabir, who oversaw Tuesday’s election and continue to lead this impressive County operation. I thank their hardworking staff and hope they all can get some rest soon. I also want to thank the employees of many city departments, which helped stand up and staff this operation; the Office of Innovation and Technology, the Managing Director’s Office, Finance Department, our Police Department, Chief Administrative Office and others have helped support the City Commissioners in preparing for this election for over a year.

Mayor Jim Kenney: (06:10)
And there are hundreds of others, including many city employees who helped on Election Day and by staffing this ballot counting operation for all the world to see. You’re all too numerous to name, but please know that you have my thanks and the thanks to the people of this city. And most of all, I thank the people of Philadelphia.

Mayor Jim Kenney: (06:30)
Earlier this week, Commissioner Deeley and I sent out an open letter to voters, urging patience and calm on Election Day and the days that followed. You have shown it in spades. We asked that you stay calm and stay above the fray. You did exactly that. What we’ve seen on the streets outside this convention center, was not anger or contention, but music, dancing, and celebration. As we predicted, the voters and residents of Philadelphia ensured that our City shined as an example of how to run an election correctly.

Mayor Jim Kenney: (06:59)
So in the days ahead, please remember this is not about a victory for a single candidate or a single political party. This is truly a victory for our democracy. That may sound cliche, but today it is oh so true. The votes will continue to be counted until every valid mail-in ballot, absentee ballot and provisional ballot is counted. So while some, including the president, continue to spew baseless claims of fraud, claims for which his team has not produced one iota of evidence, what we have seen here in Philadelphia is democracy, pure and simple.

Mayor Jim Kenney: (07:32)
Our Founding Fathers, who conceived this system just a 15-minute walk down the street, I know would be proud. 233 years after the Constitutional Convention, we stand at this convention center and proclaim the system still works. The people have spoken. And God willing, we will have a peaceful transition to power in January. I’d like to take a moment now to introduce commissioner Lisa Deeley, who is the chair of the Philadelphia City Commissions.

Commissioner Lisa Deeley: (08:00)
Thank you, Mr. Mayor. First of all, I want to thank all of you and the public for your continued patience. Our goal has been to produce accurate results as quickly as possible, and we’ve continued to work toward that end. We’ve counted a total of 690,360 votes. Of that, 337,609 ballots were cast by mail and 353,021 were cast at a polling place. This is by far the largest number of mail-in ballots in the City’s history. I’m very proud of the work our staff did. They’ve been working around the clock since Tuesday and before.

Commissioner Lisa Deeley: (08:50)
Here’s what you can expect in the upcoming days. At some point this afternoon, we will report another update of mail-in ballot results. I expect it to be 2,000 to 3,000. After that, the remaining ballots generally fall into one of three categories; those that require a review, provisionals, U.S. military overseas ballots. I would estimate there’s approximately 40,000 remaining to be counted. We can also tell you that it may take several days to complete the reporting of that. And as you know, election results are not officially certified until 20 days after the election.

Commissioner Lisa Deeley: (09:40)
Thank you again. Thank you to the citizens of Philadelphia. And now, I would like to invite Commissioner Omar Sabir to the podium.

Commissioner Omar Sabir: (09:55)
Good afternoon. I’d like to think the County Board of Elections’ staff. I would like to thank the taxpayer citizens of Philadelphia and across America. I think it’s safe to say that democracy has won. Democracy is beautiful. We saw the statue of Octavius Catto right on City Hall, where he died so that Americans can have access to the democratic process. And as we stand here today in 2020, people still have access to democracy. That’s a beautiful thing, but we still want everyone to exert patience, ignore a lot of the noise that’s going on, allow us to complete the counting process.

Commissioner Omar Sabir: (10:44)
And again, I’d like to think everyone. I would also like to think my beautiful wife at home with my six children while I’m down here doing all of the counting. And I’d like to say, “Hi wife, I love you and thank you.” All right now, I’d like to bring on our Council President Darrell Clarke, who’s a friend, who’s a mentor and a true leader of Philadelphia.

Darrell Clarke: (11:09)
Thank you, commissioner. Good afternoon everyone. To say this was a tumultuous year would be the understatement of the year. We in the City of Philadelphia and across the nation, have gone through some very, very challenging times. But in spite of that all, democracy works. Democracy works. I want to thank the commissioners who were given a short time frame to transition from the traditional, in-person voting, that Philadelphians are known for, to having a mail-in ballot system, to have multiple options.

Darrell Clarke: (11:41)
Guys, I just want to say you did a great job. You did a great job. But in all due respect to you guys, I want to thank the people that work. Every time you went by Broad Street, or you went by City Hall, or you went by Delaware and Spring Garden, the lights were on, because we had literally hundreds of hardworking individuals in there, making sure that this process works. So I just want to thank everybody. I want to particularly thank the citizens of our City who understood the need to participate at record numbers, to a degree. I want to thank the country for understanding the need to have a reasonable process that allows the citizens to speak. So to everyone involved in, and particularly these individuals here, the mayor, the commissioners, thank you all. And thank you for giving us an opportunity to allow democracy to work. Thank you.

Speaker 7: (12:44)
What are doing with the mail-in ballots that arrive Wednesday, Thursday, Friday? When are you going to count them?

Commissioner Lisa Deeley: (12:51)
They are segregated as per the instruction of the secretary.

Speaker 9: (13:23)
Commissioner, can you speak to the process and to the pace of the counting? I know that there has been a pause yesterday during some legal issues. Have there been other things that have slowed you down?

Commissioner Lisa Deeley: (13:39)
No, we are counting hundreds of thousands of ballots in an industrial process. And we are fortunate to have that machinery to allow us to count faster, but it still is a process. We get all these envelopes in, and it’s like an assembly line. First, you’ve got the envelopes, you have to sort them, and then you have to open them, and then you have to open them again to get the secrecy envelope out. Then somebody actually sits there at a desk and is pulling the contents. And then the ballots have to be back bended and prepared for the scanner.

Speaker 8: (15:07)
[crosstalk 00:15:07] Can I ask you, the details about the monitors? We’ve heard the allegations from the president. Who is monitoring what’s happening in there? The Department of Justice-

Commissioner Lisa Deeley: (15:16)
Everybody’s monitoring. We have a live stream. Anybody can watch. You’ve all been watching it.

Speaker 13: (15:38)
Commissioner, what about the ballots that have issues-

Mayor Jim Kenney: (15:55)
No, I think what the president needs to do is frankly put his big boy pants on. He needs to acknowledge the fact that he lost, and he needs to congratulate the winner, just as Jimmy Carter did, just as George H. W. Bush did, and frankly, just as Al Gore did. And stop this and let us move forward as a country, and that’s my feeling. I doubt he’ll listen to me, but that’s it.

Speaker 15: (16:34)
And the ballots that were sent that needed to be counted, there are ballots with issues. Could you describe a little bit about the process that it takes to check the legitimacy of [inaudible 00:16:47] ballots [inaudible 00:16:48] and what’s the timeframe for you guys to be able to finish counting them? I assume you guys have been doing it [crosstalk 00:16:54]

Commissioner Lisa Deeley: (16:54)
We’re going to continue to count the ballots as quickly as we can without sacrificing accuracy, as we have from the beginning. That’s where we’re at. We’ll be done when we get done, because we still have ballots that we are scanning today. There’ll be another update, as I said. And we’ll continue to do, as we have been doing, ensuring that the ballots that we have are counted as quickly and as accurately as possible.

Commissioner Lisa Deeley: (17:31)
We should have a little update this afternoon. It might be going up now or shortly.

Speaker 17: (17:38)
And when will you start counting the segregated ballots?

Commissioner Lisa Deeley: (17:42)
We are in the process right now of counting just like we were yesterday and the day before. It’s the same process. We are counting ballots, and we will continue to do that as quickly as possible without sacrificing accuracy.