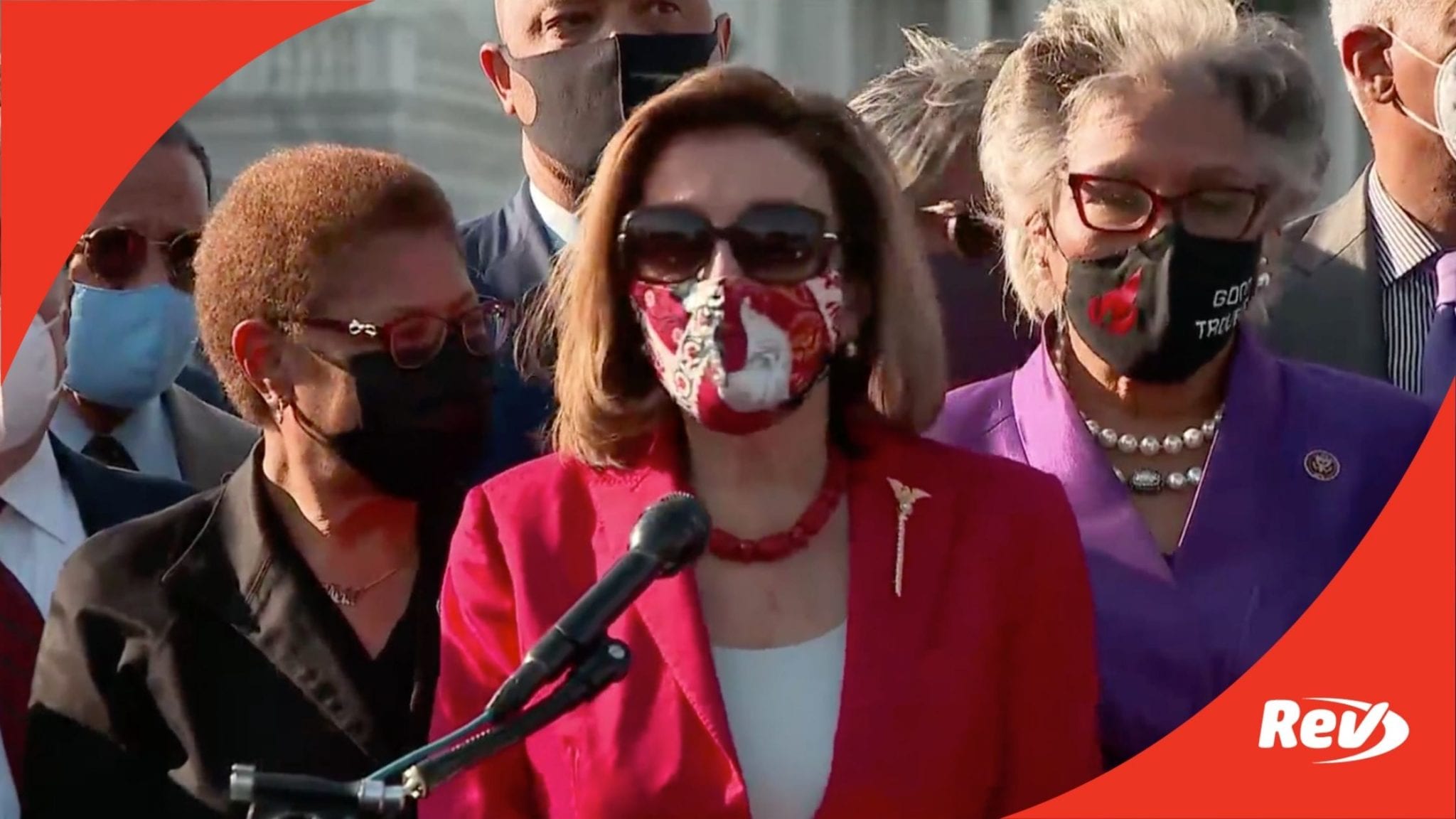 House Speaker Nancy Pelosi gave remarks after the Derek Chauvin verdict was announced on April 20, 2021. Derek Chauvin was found guilty on all charges in the murder of George Floyd. Read the transcript of Pelosi’s speech here.

Rep. Bass: (00:00)
… at the hands of police. As a matter of fact, since the trial started on March 29, 63 people have died at the hands of police. In my opinion, this is the human rights issue in the United States of America, and the point is that we need to pass the George Floyd Justice in Policing Act, put it on President Biden’s desk, because that will be the first step to transforming policing. We need to take a hard look at ourselves in this country, in the mirror, to say why is it that over a hundred people have died at the hands of police in the matter of a year? We saw the video tape. We understand the egregious murder, but what about the ones that were not taped on a cell phone? So today, I am relieved. Today, I exhale, but today just marks the beginning of a new phase of a long struggle to bring justice in America. Thank you.

Madam Chair Beatty: (01:03)
Thank you so much. At this time, we would like to ask Speaker Nancy Pelosi to make some remarks.

Speaker Pelosi: (01:10)
Thank you very much, Madam Chair. As you probably know, there are many honors that are afforded to a member of Congress, and certainly many more to the speaker of the House, but nothing surpasses the honor of being with the Black caucus today when we have seen a step in the right direction for justice done. Earlier, around 3:00, I spoke to the family to say to them, “Thank you. God bless you for your grace and your dignity, for the model that you are, appealing for justice in the most dignified way.” They are in search of justice then, and now they see this giant step. But as our colleagues have said, it’s not over. They complemented the Congressional Black Caucus for its role that it has played in all of this. They’re eager to see Karen Bass’ George Floyd Justice in Policing Act passed and signed by the president into law. All of them… Well, Philonise has become a star. Rodney and Terrence, the brothers. Bridgett is their sister.

Speaker Pelosi: (02:32)
We all know [inaudible 00:02:33], who’s a force of nature within the family. But Gianna, his daughter… Gianna to see this justice on behalf of her father, his name synonymous with justice and dignity and grace and prayerfulness, and prayerfulness. So we thank God. We thank Jesus, because we were praying to him all along, right, Darling? We thank God. They are people of faith. They conveyed that to me on the phone, but they’ve conveyed it all along. So it will be eight weeks, according to what the judge said on this before we know the sentencing, but that’s part of the justice of it all as well. Mr. [Kyburn 00:03:22] has been a solid steady force for all of us here, because this was traumatic. My little granddaughter who just turned 12, she said, “Why is it taking so long?”

Speaker Pelosi: (03:38)
It didn’t take that long, but we all saw it on TV. We saw it happen. And thank God, the jury validated what we saw, what we saw. So again, thank you, George Floyd, for sacrificing your life for justice, for being there to call out to your mom. How heartbreaking was that call out for your mom, “I can’t breathe?” But because of you and because of thousands, millions of people around the world who came out for justice, your name will always be synonymous with justice. And now we have to make sure justice prevails in the sentencing, but that’s its own procedure. Our responsibility is to make sure that Karen Bass, who has been so open to justice with the bill that she put together, she wrote… And now trying to find areas of agreement in the Senate. Because unless we can change the law, this’ll be an episode.

Speaker Pelosi: (04:53)
We change the law, we’re going down a different path altogether. So thank you, Madam Chair Beatty, for your great leadership in all of this, for being a steady voice, to keeping some of us who just were calling constantly, “Did you hear anything,” or whatever, and in a place where we could follow the lead of the family. Grace, dignity, prayerfulness, but having a rage for justice, which is what we all have. With that, I yield back to distinguished chair of the Congressional Black Caucus. And let’s hear it for the Congressional Black Caucus. That’s an applause line.

Madam Chair Beatty: (05:35)
Thank you. Thank you again, Madam Speaker. Let me close out by saying…

Madam Chair Beatty: (05:48)
Let me just say, as I was getting ready to say, our Majority Leader Steny Hoyer has also joined us, and that he was running the floor. Let me end with this. Let me simply say, in the words of a child, George Floyd’s daughter, yesterday, several of us were in Minneapolis. Congresswoman Sheila Jackson Lee, Congresswoman Maxine Waters, Congresswoman Karen Bass, Congresswoman Ilhan Omar. And as we sat with the family, and as I went up to that child and I said thank you to her, and I shared her words back with her, I said, “In your words, your daddy will change the world.”

Madam Chair Beatty: (06:39)
And as her uncle was holding her, she reached down, took my hand, and she said, “Thank you for being here.” So to the Congressional Black Caucus, thank you for always being here. This is the first step, but in her words, today we start to change the world. Thank you. We’re going to walk back in together. There will be many members who may want to make statements to you, but at this time, we’re not taking any statements from the caucus. We’re going to go and continue to do the people’s work. Thank you.