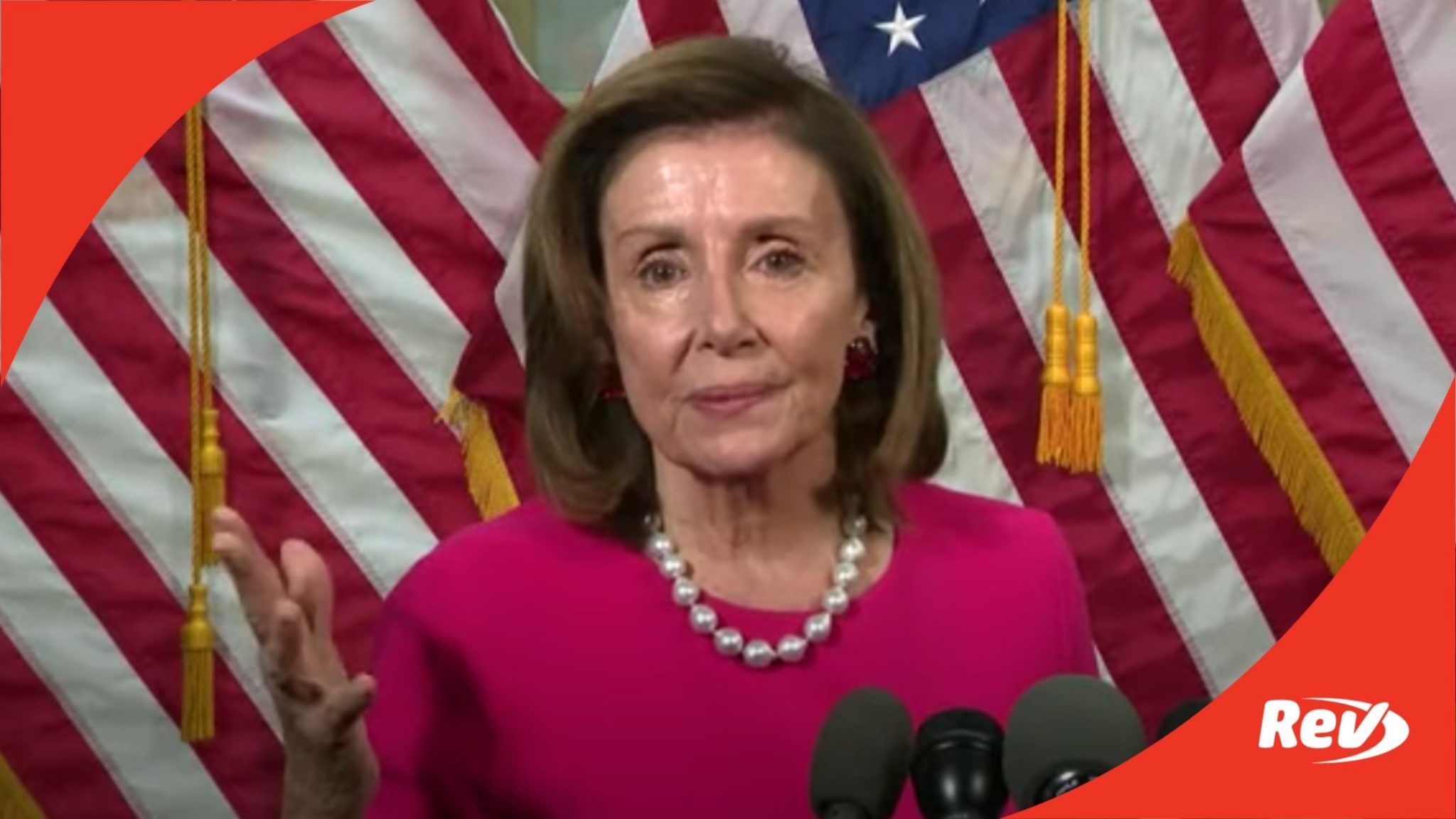 House Speaker Nancy Pelosi said the House will be moving forward on reconciliation and the bipartisan infrastructure bill during remarks to the press on September 28, 2021. Read the transcript of her speech briefing here.

Nancy Pelosi: (00:00)
Here under the ceiling of that room is the greatest collection of integrity, inspiration, imagination, to do great things for the American people and to appreciate each other in a unified way. Listening to them, it just is so encouraging. And we have been listening to them all along. And that’s how we have built the consensus that we want people to support Build Back Better. Our President has said, “I will support the infrastructure, whatever we can reach in a bipartisan way, but I will not confine my vision for the future to what that bipartisan infrastructure will be. We will go forward with the reconciliation and we will.”

Nancy Pelosi: (00:52)
So in the next day or so, we hope to come to a place where we can all move forward on that. Chuck, the leader and I, the leader in the Senate and I have caucuses that care very much about the transformative nature of the Build Back Better legislation for women in the workplace, for children and their care and the tax, Biden tax credit for people with disabilities who need the home healthcare services and those workers who provide them to have the respect and the pay and the training that is worthy of the people that they’re caring for and of those workers.

Nancy Pelosi: (01:36)
And we need to recognize the time is, the fuse is going, it’s really a short fuse when it comes to protecting the climate. Glasgow is a matter of weeks away. We want the President to be able to go there with a plan to meet our emissions promises and standards, as well as our commitments to poor nations for the technology to help meet their standards as well. So it’s a pretty exciting time. It’s a very big agenda and it is transformative. We spent a good deal of time in our caucus there talking about lifting the debt ceiling and how when the Republicans refuse to cooperate on this, they are jeopardizing the full faith and credit of the United States of America, which is guaranteed in the Constitution, the 14th Amendment. They are jeopardizing in terms of trillions of dollars of family wealth, trillions of dollars, how that impacts individual families in our country, individual people in our country.

Nancy Pelosi: (02:46)
So we spent the bulk of our caucus on the full faith and credit today, because that is imminent. We’re getting a letter. We’ve already received a notice of a letter from the Secretary of the Treasury. That is just a matter of weeks before we run out of extraordinary measures to protect us from that assault. But just the discussion of it, a number of years ago, when the Republicans were refusing to lift the debt ceiling when President Obama was president, just the discussion of it lowered our credit rating. So we have a number of things on the lift the debt ceiling, keep government open. We intend, we have to do those imminently more even to address the full Obama agenda of building back better with, and I love to say building back better with women. So that’s where we are. Now we have to see what comes of the negotiations that are going on if they are worthy of the commitments we have made in the Build Back Better.

Speaker 2: (03:48)
How are you going to progress this to a vote for this bipartisan-

Nancy Pelosi: (03:51)
It just depends, I just said, thank you for your question. Again, we’ll see what is it, what we need to have, and that is the essence of the Build Back Better. If it’s a shorter period of time or something like that, that’s a question that we’ll deal with, but I’m not going to negotiate that right here.

Speaker 3: (04:08)
Madam Speaker, just two quick questions. Number one, debt ceiling, you were intending to move a clean debt ceiling today. Is that your plan?

Speaker 3: (04:17)
Okay. Is there any thought of using the 14th Amendment to lift the debt ceiling? I’ve heard you mention that a couple of times. Is that something that you’re thinking about?

Nancy Pelosi: (04:28)
I’ll let you know soon. No, I mean, the point is it’s in the constitution. We really do not have to go through this all the time. And what’s important for you all to know and to report. This is not about future spending. This is about to pay the bills that were incurred. Only 3% of this is about Joe Biden’s presidency. The bulk of it is under the previous president’s administration where Democrats and Republicans today added to the national debt because of COVID. We don’t share the responsibility for a tax scam that gave 83% of the benefits to the top 1% and added $2 trillion to the national debt. But nonetheless, it has to be addressed. And it’s about paying past bills. How we go about it, well that’s legislation, we’re balancing one equity or another as to timing and the rest on that. [inaudible 00:05:34] I saw you raise your hand. Clarification?

Nancy Pelosi: (05:48)
Well, we have to lift the debt limit. Now, are there discussions and some of it was in our caucus about future? In other words, how do we deal with this in the future. Brendan Boyle had an excellent idea. He said that his legislation with John Yarmuth would say that the responsibility for lifting the debt ceiling rests with the Secretary of the Treasury and that person, she in this case would have the authority to lift the debt ceiling. Congress would have the authority to reject that, but that would require an act of Congress and a signature from the President of the United States. There are others who, Jerry Nadler wants to have a coin, a trillion dollar coin that doesn’t even require congressional, so we talked about an array of things, but that’s right now we have to get, we have to raise the debt ceiling. One more question.

Speaker 4: (06:49)
Are you disappointed that you had to be linked to bill and it’s taking longer than what you thought it would be initially?

Nancy Pelosi: (06:56)
Well, I thought we were on a path. Everybody said, “Well, you said you were going to do this.” Yeah, well we had a commitment. We weren’t on a path of a number $3.5 trillion. And that’s how we wrote our bills. All of our committees of jurisdiction participated in writing their bills on Saturday, and everybody worked on schedule. That’s what I was so excited about. Everybody was on schedule. So by September 15th, the bills were finished. By Saturday, it was marked up by the budget committee, but we’re still operating at the $3.5 trillion. Then there was an intervention, as you know, in the past week or 10 days of saying, “Well, we can’t go there because of the what.”, so we’ll see what that is. And hopefully, it will reach the level that we need in order to pass both bills, but we will pass both bills.