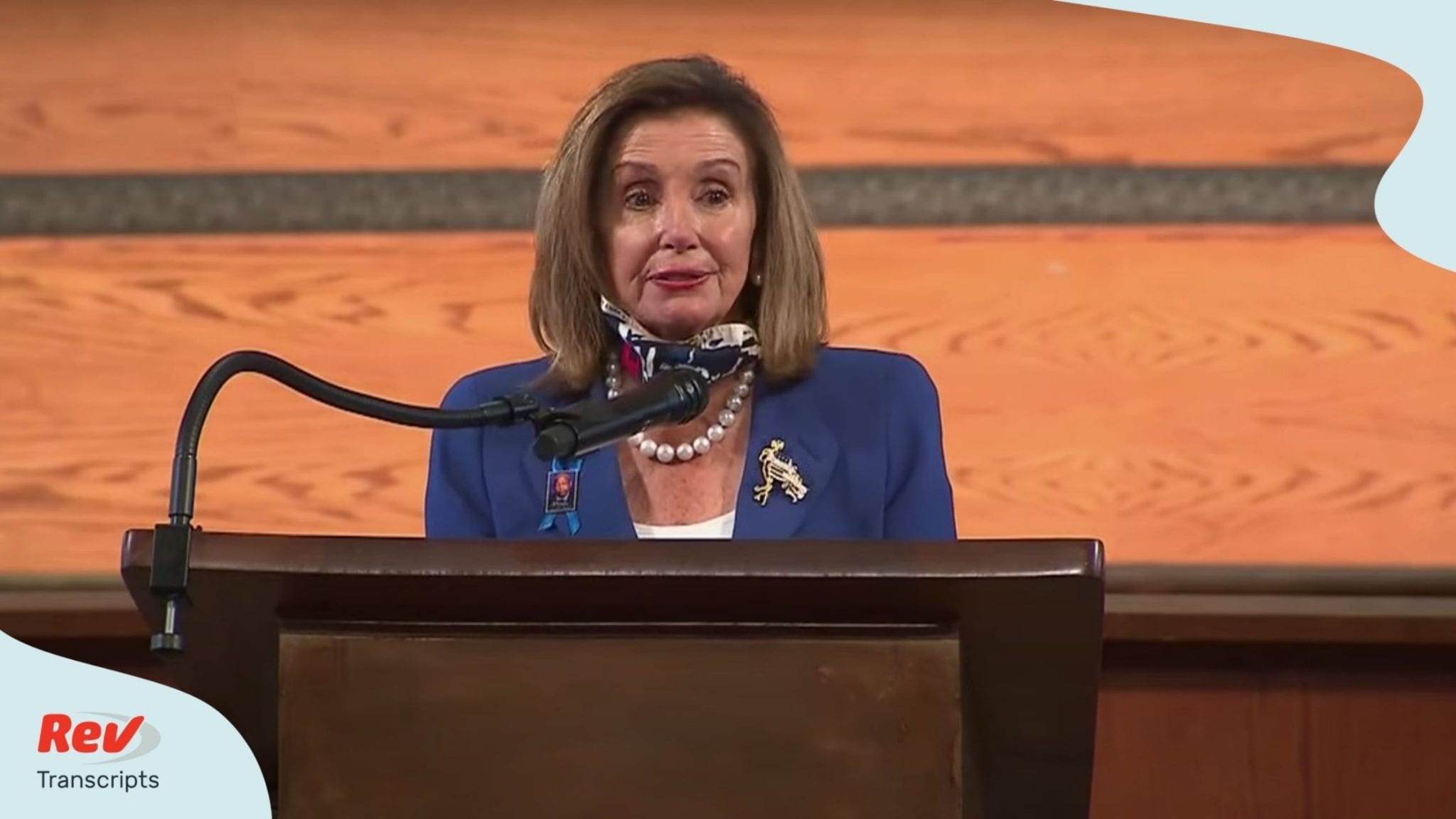 House Speaker Nancy Pelosi gave a eulogy at John Lewis’ funeral on July 30. She said: “So when he spoke, people listened. When he led, people followed”. Read the eulogy speech transcript here.

Nancy Pelosi: (00:01)
Good day. I’m not sure morning, afternoon, whatever it is. It’s an honor to be here with each and every one of you. Reverend Warnock, thank you for enabling us all to be here at the Ebenezer Baptist Church to honor and celebrate the life of John Lewis with three presidents of the United States. Isn’t that exciting? President Clinton, President Bush and soon President Obama here with us. On behalf of my colleagues as speaker of the house, I’m pleased to bring greetings to each and every one of you. I’m sad to bring condolences to the family, to John Miles, to the entire Lewis family, thank you for sharing John Lewis with us. I’m pleased to be here with so many members, 50. We would have had more except coronavirus prevented the church from allowing us to bring more, but I hope they will all stand. Members of the House of Representatives.

Nancy Pelosi: (01:08)
Senators Harris and Booker are with us as well. Senators Harris and Booker. Among them, Mr. Steny Hoyer, Mr. Jim Clyburn and I served with John Lewis for over 30 years, over 30 years. And in our group, we have senior members and we have members of our freshmen class. John convinced each one of us that we were his best friend in Congress. And we come with a flag flown over the Capitol the night that John passed. When this flag flew there, it said goodbye, it waved goodbye to John, our friend, our mentor, our colleague, this beautiful man that we all had the privilege of serving with in the Congress of the United States. So again, we all bring our condolences to the family and to Michael Collins and John’s staff who meant so very much to him. Thank you for your service to John Lewis.

Nancy Pelosi: (02:55)
There’re many things we’re grateful to the family for and to the staff for and we commend them for, but let’s acknowledge the stamina they have had to keep up with John, even as he passed on from Troy to Selma to Montgomery to Washington, and now to Atlanta to be at rest. When John Lewis served with us, he wanted us to see the civil rights movement and the rest through his eyes. He told us so many stories, he taught us so much and he took us to Selma for two decades, Mr. President, he took us to Selma. You referenced 25 years, some of us were there many times, including 50th anniversary, where president Bush was as well as president Obama. And he wanted us to see how important it was to understand the spirit of nonviolence. I hesitate to speak about nonviolence in the presence of the master himself, Reverend Lawson, who we’ll be hearing from shortly. We were together just recently in Selma when he and John spoke at church and he taught the world really about nonviolence.

Nancy Pelosi: (04:15)
But I just want to say this, the word Satyagraha is a [inaudible 00:04:22] word that in Sanscript means two things, it means nonviolence, and it means insistence on the truth. And that is what John Lewis was all about, nonviolently insisting on the truth. He insisted on the truth in Nashville, in Selma, in Washington DC, at the Lincoln Memorial. He insisted the truth wherever he went. And he insisted on the truth in the Congress of the United States. Every time he stood up to speak, we knew that he was going to take us to a higher place of our understanding of what our responsibilities were and what our opportunities were. And he insisted no matter how, shall we say offended someone might be, that he would insist on the truth.

Nancy Pelosi: (05:20)
What he said, “He said in my life, I have done all I can to demonstrate that the way of peace, the way of love and nonviolence is the more excellent way. Now it is your turn,” he says in this article that the president referenced, “to let freedom ring.” He always talked about truth marching on. He always worked for a more perfect union. Over the 4th of July weekend, I had the privilege of visiting with John and I brought him this flag pin that I wear, one just like it. Why I did so on that 4th of July weekend was because it is engraved with something that says, one country, one destiny. Now, wasn’t that what John Lewis was all about? One country, one destiny.

Nancy Pelosi: (06:24)
I mention it because this was embroidered into the lining of Abraham Lincoln’s coat that he had on the night he left us. I think he had the coat on all the time, but also that night. And John Lewis and Abraham Lincoln had so much in common. John, we got to know him, first and foremost, in front of the Lincoln Memorial, when he made that beautiful, beautiful speech. John land state under the rotunda, in the rotunda, under the dome of the Capitol, on a catfolk platform that was made in 1865 to hold the casket of Abraham Lincoln. Abraham Lincoln, John Lewis. John Lewis. So they had lots of connections.

Nancy Pelosi: (07:35)
And by the way, just incidentally, they were both wonderful and spiritual and saintly, but they were both very good politicians. Think of John Lewis that way, you will know him know that he always was about a more perfect union. And he was always about young people. That’s why, Mr. President, that article you referenced in the New York Times today, his message that would be delivered at this time as he left us was about young people. He says to them, “Together, you can redeem the world.” Together, always perfect union, together. One nation, one destiny. And he says in the article, “Answer the highest calling of your heart and stand up for what you truly believe in.” Wasn’t that just like John? We were very proud to have his voice in the rotunda speaking about all that he cared about and believed in, in such a beautiful way starting in Troy.

Nancy Pelosi: (08:46)
I started my remarks by talking about the flag that wave over the Capitol to say goodbye to John as he began his passage. But what I want you to know in addition to how revered he is in the Congress, so revered that he was a bit mischievous. When he would say, let’s make some good trouble, he always had a twinkle in his eye and a spark about it all. And my colleagues can tell you that when he cooked up having to sit in on to get the Republican leadership to put the gun violence prevention bill on the floor, when he did that and all the members followed him, the floor was covered with people and it’s thought for a moment that perhaps the police might… Because it was disruptive, good trouble. It was clear to them that if they were to arrest John Lewis for doing that, they were going to have to arrest the entire house democratic caucus.

Nancy Pelosi: (09:53)
So when he spoke, people listened. When he led, people followed. We loved him very much. As his official family, we mourn him greatly. He shared so much with his love for his district, his family, the sadness when Lillian was sick, the joy he had in John Miles. But as I said, we waved goodbye to this person, our leader, our friend, this, shall we say humorous, he loved to dance, he loved to make us laugh sometimes while he was dancing. My granddaughter Bella said to him, “Did you ever sing in the civil rights movement?” He said, “They asked me to sing solo one time, so low so that nobody could hear me.”

Nancy Pelosi: (10:56)
But anyway, getting back to that flag, waving goodbye to this person we just loved officially, personally, in every way, politically too. The last night he was at the Capitol, it wasn’t raining. Thousands of people showing up to pay their respects. A little bit after 8:00 o’clock, there was a double rainbow, a double rainbow, but it hadn’t rained. It was a double rainbow over the casket. And for us, we waved goodbye when he started to leave us, he was telling us, “I’m home in heaven, I’m home in heaven with Lillian.” We always knew he worked on the side of the angels. And now he is with them. May he rest in peace. Thank you.