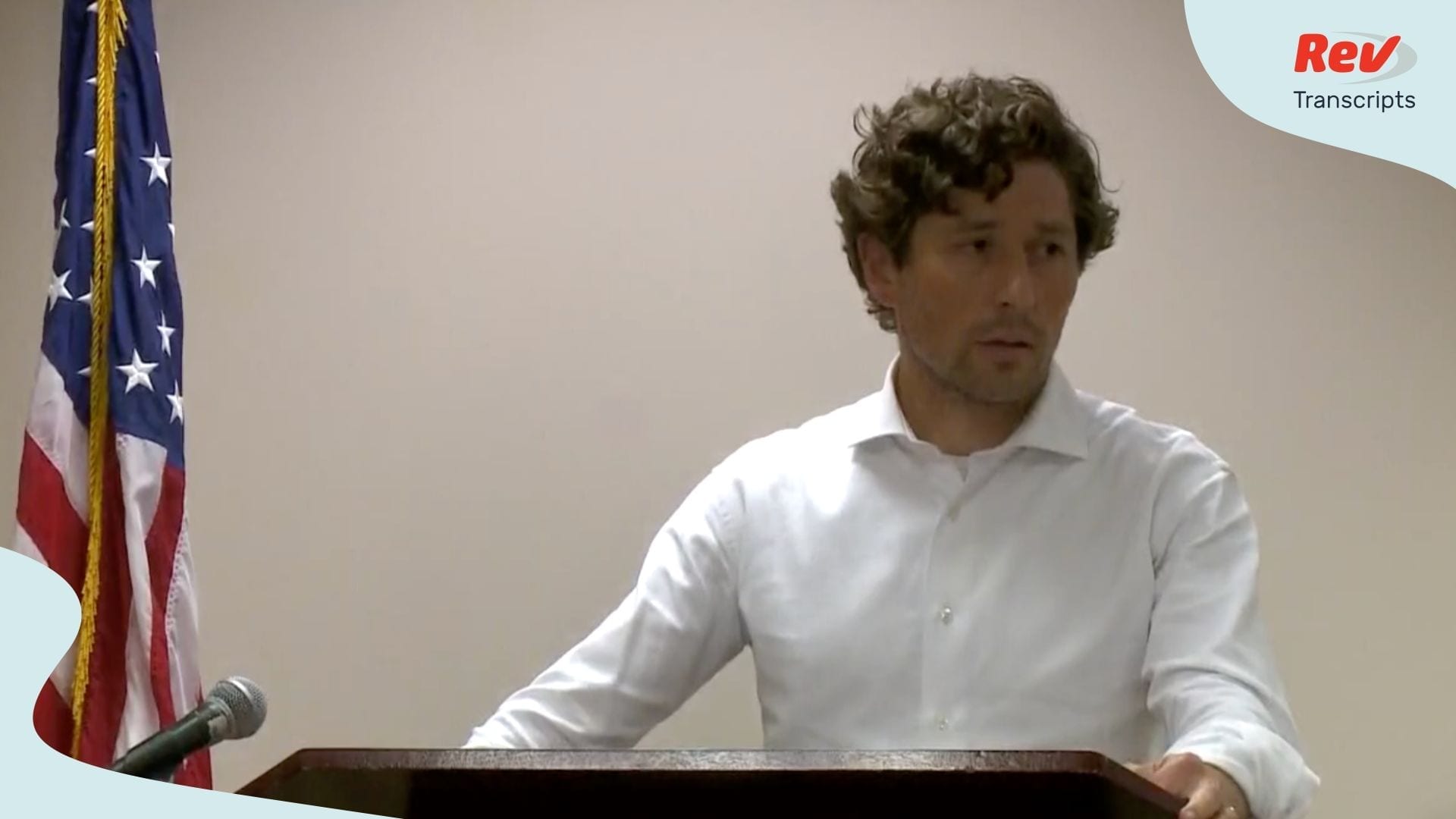 On a night of riots and protests over the killing of George Floyd in Minneapolis, Mayor Frey gave a late night press conference. He spoke about the burning of the 3rd Precinct police station, and responded to Donald Trump’s tweets calling Frey weak & saying “when the looting starts the shooting starts.” Read Frey’s news briefing speech transcript here.

Mayor Jacob Frey: (00:00)
… The third precinct. It became clear that there were imminent threats to both officers and public. And the danger became necessary. And I made the decision to evacuate the third precinct.

Mayor Jacob Frey: (00:28)
The symbolism of a building cannot outweigh the importance of life, of our officers, or the public. We could not risk serious injury to anyone, and we will continue to patrol the third precinct, entirely. We will continue to do our jobs in that area. Brick and mortar is not as important as life. Happy to answer any questions on this topic.

Speaker 2: (01:11)
Mayor, at what point did you hear that people… Did you receive word earlier in the day that people might be interested in protesting that, or going into the third precinct?

Mayor Jacob Frey: (01:23)
We have received reports regarding many, attempting to get into the third precinct, on numerous occasions. Yes.

Speaker 3: (01:32)
What’s your response to President Trump’s tweets saying that looters should be shot? Have you seen the President’s tweets?

Speaker 4: (01:59)
Clearing the streets. A lot of businesses have been burned down. A lot of livelihoods have been hurt. We have not seen… We’ve seen very little police out there, just in general, at the third, and throughout. And I’m just wondering, what is the plan? And who is in charge? Right now, in this city.

Mayor Jacob Frey: (02:17)
There is a lot of pain and anger right now, in our city. I understand that. Our entire city recognizes that. What we have seen over the past several hours, and the past couple of nights, in terms of looting, is unacceptable. Our communities cannot and will not tolerate it.

Mayor Jacob Frey: (03:12)
And so, we are working with our officers right now. We are working, of course, with resources provided by the state. We’ve authorized a mutual aid, and a unified strategy, so that we can work with different jurisdictions in the area. It was clear, as of last night, that we needed additional help. And we got that additional help. Some from the state, and we are expecting more, as well.

Mayor Jacob Frey: (03:44)
I’ll say this, we additionally need help from our community. We need to make sure that people are looking out for our city right now. It’s not just enough to do the right thing yourself. We need to be making sure that all of us are held accountable, to make sure that we’re holding up the highest ideals that we stand by.

Mayor Jacob Frey: (04:54)
We have officers that are stationed around the city in several different locations. We have, in many instances, assistance from the state to prevent looting at some of these community institutions, that we know will be necessary to get through this pandemic.

Mayor Jacob Frey: (05:13)
This is one of the most difficult situations that our city has been through. I’m not going to stand up here and tell you that there are easy answers to it, because there are not. What I can tell you is that through this pandemic, Chief Arradando has my 100% support. Chief Friedl and the fire department has my 100% support. We’re going to be united as a city.

Speaker 5: (05:41)
So, where is the National Guard? And how has it being deployed? Who’s got that control? Who’s making those calls?

Mayor Jacob Frey: (05:48)
So, many of these questions, you’re going to want to direct to our Chief, who has been working consistently with Harrington, from the state. And many of the National Guard, as I mentioned, were stationed, and are being stationed, in locations to help prevent some of the looting that we’ve seen.

Speaker 3: (06:16)
Mayor, I have the President’s tweet here. He sent out two, just in the last couple of hours. One personally attacking you. A second one that says-

Speaker 3: (06:26)
“Just spoke to governor Tim Walz. And I told him that the military is with him all the way. Any difficulty, and we will assume control. But when the looting starts, the shooting starts.” This is the President of the United States tweeting just a little bit ago. What’s your reaction to that?

Speaker 3: (06:45)
There was an earlier one calling you a radical leftist, and a weak mayor, and to get things under control. And I have it here. “I can’t stand back and watch this happen to a great American city. A total lack of leadership,” says the President. “Either the very weak, radical left mayor, Jacob Frey, get his act together and bring the city under control, or I will send in the National Guard and get the job done right.” That was the first of two tweets from the President.

Mayor Jacob Frey: (07:13)
Well, let me say this, weakness is refusing to take responsibility for your own actions. Weakness is pointing your finger at somebody else during a time of crisis. Donald Trump knows nothing about the strength of Minneapolis. We are strong as hell. Is this a difficult time period? Yes. But you better be damn sure that we’re going to get through this.

Speaker 2: (07:42)
So, Mayor, some people have questioned whether you made a conscious decision to let people go into the third precinct and offer an office, one of these healings spots that you had referenced earlier in the day, is that how you were approaching it?

Mayor Jacob Frey: (07:56)
No. The decision that I made was for the safety of our officers, and the safety of the public. The symbolism of a building cannot outweigh the importance of life. It’s a decision that I did not take lightly. I understand the importance of a precinct, but we are able to regroup and continue providing the same service to the third precinct, as a geography.

Speaker 2: (08:39)
Was it earlier in the afternoon? Or just a couple hours before this taken?

Mayor Jacob Frey: (08:43)
As situations started to escalate more and more, as we saw more and more people breach the perimeter. As we noted, we have to have our officers at many locations throughout the city to prevent looting and crime. It became obvious to me that safety was at risk. And it became obvious to me that we could take a different route that would better assist both the public, as well as the safety, of our police officers.

Speaker 3: (09:18)
Mayor, do you have any idea how many officers were in that building when it was breached?

Speaker 3: (09:44)
I mean, you have a decision to make, whether the building, the third precinct, in general, some of those businesses on that corner, to just be let go. No police responding to it. Or, do you engage the protesters and get them off the streets by any means necessary? The tools that are at your disposal, in terms of a heavily tooled urban police force that, I would imagine, have the tools to clear streets.

Mayor Jacob Frey: (10:37)
The resources that we will offer to the people of the third precinct will continue. Period. The building is just bricks and mortar. It’s a building.

Speaker 3: (10:50)
What if it does get worse? You talked about the community needs to help. But, what if they don’t? What is that plan to address that?

Mayor Jacob Frey: (10:59)
I’ve been in touch with Governor Walz at the state. Again, we have expressed the need for resources. We are appreciative, already, of the assistance that we’ve gotten in the form of state patrols. And as you know, we’ve requested the National Guard, as well. And we anticipate that those resources will be increasing, as well.