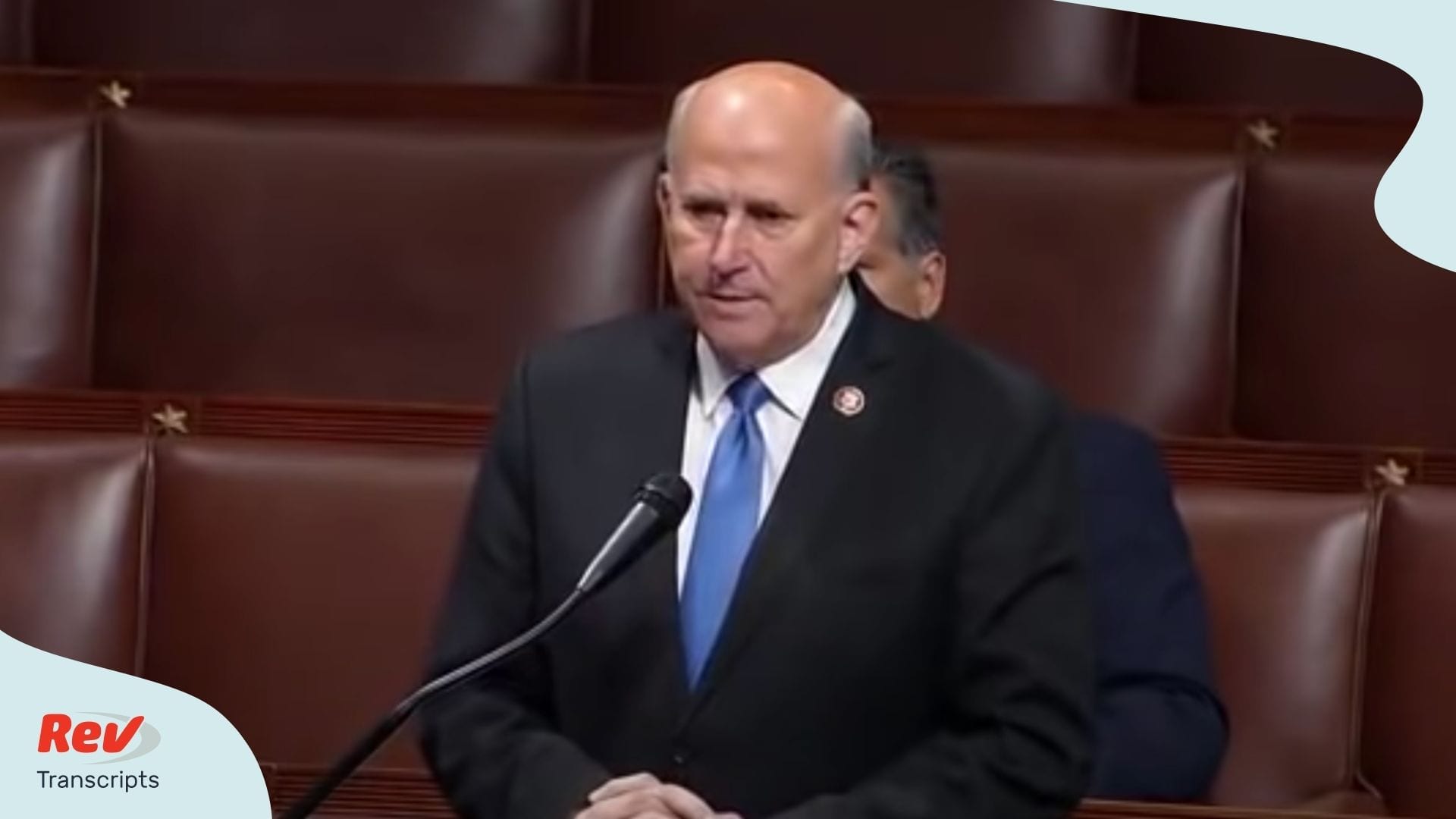 Representative Louie Gohmert (R-TX) introduced a resolution on the House floor on July 23 that would ban the Democratic party. He used the party’s past positions on slavery to support the resolution. Read the transcript here.

Louie Gohmert: (00:02)
Recognition is properly gone to a great man, John Lewis, colleague who will be sorely missed. He along with the great Dr. Martin Luther King, Jr. Some people say, “Oh, they did much for African Americans,” but actually they did a great deal for everyone in this country. As a young Christian, their efforts enabled me to treat brothers and sisters as brothers and sisters, and for that, I will be ever thankful. With that, I would yield back, but Madam Speaker, pursuant to clause A1 of rule nine, I rise to give notice of my intent to raise a question of the privileges of the House. The form of my resolution is as follows.

Louie Gohmert: (01:13)
Okay. Raising a question of the privileges of the House, whereas on July 22nd, 2020, House Resolution 7573 was brought to the House floor for a vote with the purpose of eliminating four specific statues or bus from the United States Capitol, along with all others that include individuals who “served as an officer or voluntarily with the Confederate States of America or the military forces or government of a state while the state was in rebellion against the United States,” yet failed to address the most ever-present historical stigma of the United States Capitol. That is the source that so fervently supported, condoned and fought for slavery that was left untouched, but without whom the evil of slavery could never have continued as it did to such extreme that it is necessary to address here in order for the U.S. House of Representatives to avoid degradation of historical fact and blatant hypocrisy for generations to come.

Louie Gohmert: (02:25)
Whereas the Democratic Party Platform of 1840, 1844, 1848, 1852 and 1856, states “that Congress has no power under the constitution to interfere with or control the domestic institutions of the several states, and that such States are the sole and proper judges of everything appertaining to their own affairs, not prohibited by the constitution; that all efforts of the abolitionists or others made to induce Congress to interfere with questions of slavery are calculated to lead to the most alarming and dangerous consequences; and that all such efforts have an inevitable tendency to diminish the happiness of the people and endanger the stability and permanency of the Union and not to be countenanced by any friend of our political institutions.” Again, from the Democratic Party Platform of those years.

Louie Gohmert: (03:25)
Whereas the Democratic Party Platform of 1856 further declares that new States to the union should be admitted “with or without domestic slavery as the state may elect,” whereas the Democratic Party Platform of 1856 also resolves that, “We recognize the right of the people of all the territories to form a constitution with or without domestic slavery,” whereas the Fugitive Slave Law of 1850 penalize officials who did not arrest and alleged runaway slaves and made them liable for a fine of a thousand dollars, which is about $28,000 in present day value. Law enforcement officials everywhere were required to arrest people suspected of being a runaway slave on as little as a claimant’s sworn testimony of ownership.

Louie Gohmert: (04:21)
The Democratic Party Platform of 1860 directly, in seeking to uphold the Fugitive Slave Act, states that “the enactments of the state legislatures to defeat the faithful execution of the Fugitive Slave Law are hostile in character, subversive of the constitution, revolutionary in their effect.” The Democratic Party Platform, again. Whereas the 14th amendment giving full citizenship to freed slaves passed in 1868 with 94% Republican support, 0% Democratic support in Congress. The 15th amendment giving freed slaves the right to vote passed in 1870 with 100% Republican support and 0% Democratic support in Congress, whereas Democrats systematically suppressed African Americans’ right to vote by the specific example in the 1902 constitution of the state of Virginia, actually disenfranchised about 90% of the black men who still voted at the beginning of the 20th century and nearly half of the white men, so they suppressed Republican voters as well.

Louie Gohmert: (05:35)
The number of eligible African American voters were thereby forcibly reduced from about 147,000 in 1901 to about 10,000 by 1905. That measure was supported almost exclusively by Virginia Democrats, and whereas the Virginia 1902 constitution was engineered by Carter Glass, the future Democratic U.S. representative, senator and secretary of treasury under Democrat President Woodrow Wilson, who proclaimed the goal of the constitutional convention as follows. This Democrat exclaimed, “Discrimination? Why this is precisely what we propose. That’s exactly what this convention was elected for, to discriminate to the very extremity of permissible action under the limits of the federal constitution with a view toward elimination of every,” and I won’t use his word, but “African American voter who can be gotten rid of legally,” which was said by a Democrat and applauded by his fellow Democrats.

Louie Gohmert: (06:44)
Whereas 1912 Democratic president Woodrow Wilson’s administration began a racial segregation policy for U.S. Government employees, and by 1914, the Wilson Administration Civil Service instituted the requirement a photograph be submitted with each employment application. And whereas the 1924 Democratic National Convention convened in New York City at Madison Square Garden, the convention commonly was known as the Klan Bake due to the overwhelming influence of the Ku Klux Klan in the Democratic Party. And whereas in 1964, the Democratic Party led a 75 calendar day filibuster against the 1964 Civil Rights Act, whereas leading the Democrats in their opposition to civil rights for African Americans was a member of the Democratic Party, Senator Robert Byrd from West Virginia, who was a known recruiter for the KU Klux Klan. Whereas Democrats enacted and enforced Jim Crow laws and civil codes that forced segregation, restricted freedoms of black Americans in the United States.