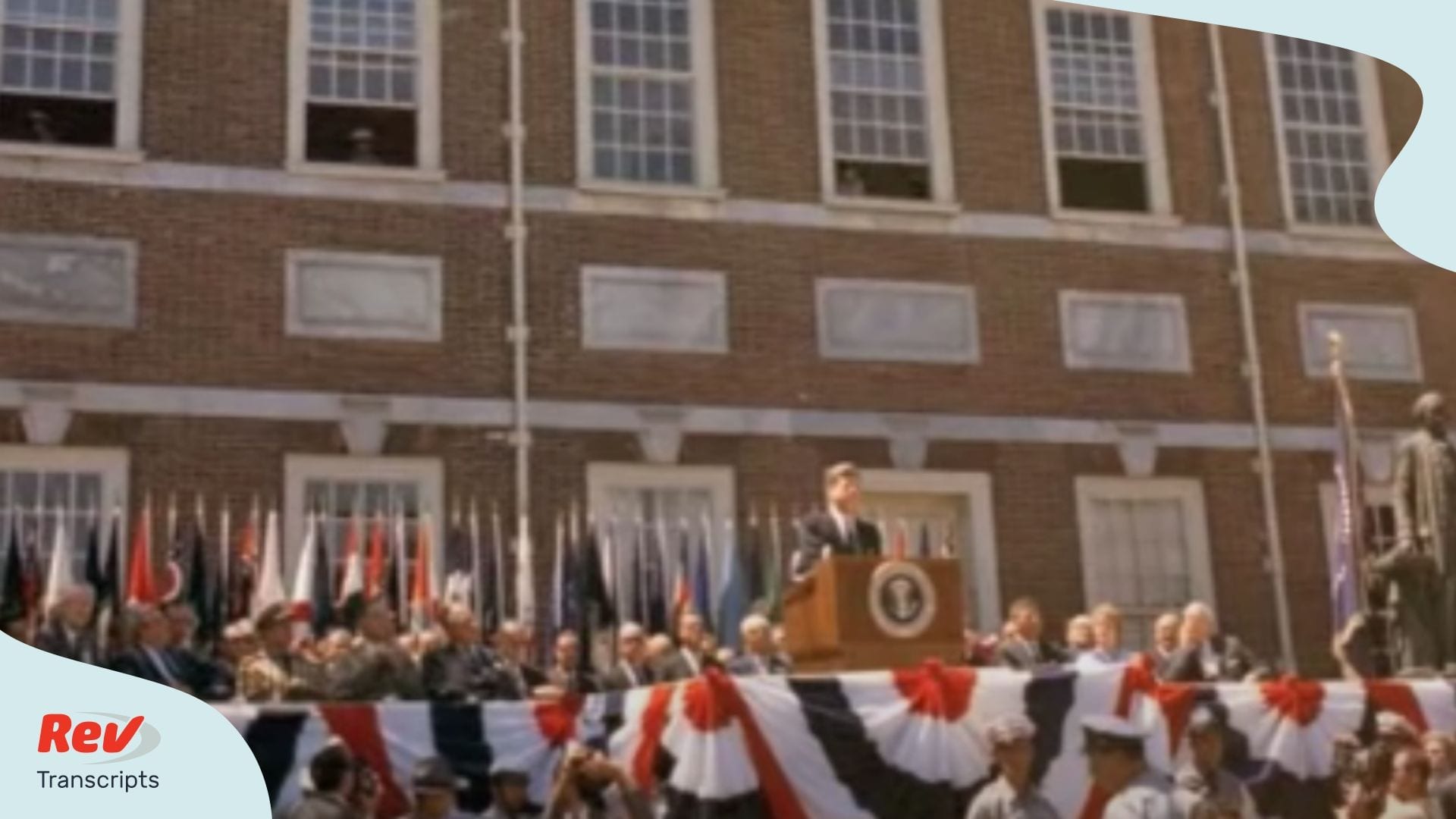 John F. Kennedy : (00:07)
Governor, Governor Powell, Your Excellency The Archbishop, Governor Lawrence, Mayor Tate, Senator Clark, Congressman Green, distinguished governors, ladies and gentlemen, citizens of Philadelphia. It is a high honor for any citizen of the great republic to speak at this Hall of Independence on this day of independence. To speak as President of the United States to the chief executives of our 50 States is both an opportunity and an obligation. The necessity for comity between the national government and the several states is an indelible lesson of our long history.

John F. Kennedy : (01:09)
Because our system is designed to encourage both differences and dissent, because it’s checks and balances are designed to preserve the rights of the individual and the locality against preeminent central authority, you and I governors, both recognize how dependent we both are, one upon another for the successful operation of our unique and happy form of government. Our system and our freedom permits the legislative to be pitted against the executive, the state against the federal government, the city against the countryside, the party against party, interest against interest, all in competition or in contention one with another.

John F. Kennedy : (02:15)
Our task, your task in the state house, and my task in the White House is to weave from all these tangled threads a fabric of law and progress. Others may confine themselves to debate, discussion, and that ultimate luxury, free advice. Our responsibility is one of decisions for the governors to choose. Thus in a very real sense, you and I are the executives of the testament handed down by those who gathered in this historic hall 186 years ago today. For they gathered to affix their names to a document which was above all else, a document not of rhetoric, but of bold decision. It was, it is true, a document of protest, but protests had been made before. It set forth the grievances with eloquence, but such eloquence had been heard before. But what distinguished this paper from all the others was the final irrevocable decision that it took to assert the independence of free states in place of colonies, and to commit to that goal their lives, their fortunes, and their sacred honor.

John F. Kennedy : (03:51)
Today 186 years later, that declaration, whose yellowing parchment and fading, almost illegible lines, I saw in the past week in the National Archives in Washington, is still a revolutionary document. To read it today is to hear a trumpet call, for that declaration unleashed not merely a revolution against the British but a revolution in human affairs. It’s authors were highly conscious of its worldwide implications and George Washington declared that liberty and self government were in his words, “Finely staked on the experiment entrusted to the hands of the American people.”

John F. Kennedy : (04:45)
This prophecy has been borne out. For 186 years, this doctrine of national independence has shaken the globe and it remains the most powerful force anywhere in the world today. There are those struggling to eke out a bare existence in a barren land who have never heard of free enterprise, but who cherish the idea of independence. There are those who are grappling with overpowering problems of illiteracy and ill health, and who are ill equipped to hold free elections, but they are determined to hold fast to their national independence. Even those unwilling or unable to take part in any struggle between East and West are strongly on the side of their own national independence.

John F. Kennedy : (05:47)
If there is a single issue in the world which divides the world, it is independence. The independence of Berlin or Laos or Vietnam, the longing for independence behind the Iron Curtain, the peaceful transition to independence in those newly emerging areas whose troubled some hope to exploit. The theory of independence is as old as man himself and it was not invented in this hall. But it was in this hall that the theory became a practice, that the word went out to all, in Thomas Jefferson’s phrase, “That the God who gave us life gave us Liberty at the same time.”

John F. Kennedy : (06:35)
And today this nation, conceived in a revolution, nurtured in liberty, maturing in independence has no intention of abdicating its leadership in that word wide movement for independence to any nation or society committed to systematic human oppression. As apt and applicable as the Declaration of Independence is today, we would do well to honor that other historic document drafted in this hall, the Constitution of the United States. For it stressed not independence but independence, not the individual liberty of one but the indivisible liberty of all. In most of the old colonial world, the struggle for independence is coming to an end. Even in the areas behind the curtain, that which Jefferson called the disease of liberty still appears to be infectious. With the passing of ancient empires, today less than 2% of the world’s population live in territories officially termed dependent.

John F. Kennedy : (08:06)
As this effort for independence, inspired by the American Declaration of Independence, now approaches a successful close, a great new effort for interdependence is transforming the world about us. And the spirit of that new ethic is the same spirit which gave birth to the American Constitution. That spirit is today most clearly seen across the Atlantic Ocean. The nations of Western Europe, long divided by feuds far more better than any which existed among the 13 colonies are today joining together, seeking as our forefathers sought to find freedom in diversity and unity in strength.

John F. Kennedy : (09:00)
The United States looks on this vast new enterprise with hope and admiration. We do not regard a strong and united Europe as a rival but a partner. To aid its progress has been the basic object of our foreign policy for 17 years. We believe that a united Europe will be capable of playing a greater role in the common defense, of responding more generously to the needs of poorer nations, of joining with the United States and others in lowering trade barriers, resolving problems of commerce and commodities and currency, and developing coordinated policies in all economic, political, and diplomatic areas.

John F. Kennedy : (09:53)
We see in such a Europe a Partner with whom we can deal on a basis of full quality in all the great and burdensome tasks of building and defending a community of free nations. It would be premature at this time to do more than indicate the high regard with which we view the formation of this partnership. The first order of business is for our European friends to go forward in forming the more perfect union which will someday make this partnership possible. A great new edifice is not built overnight. It was 11 years from the Declaration of Independence to the writing of the Constitution. The construction of workable federal institutions required still another generation. The greatest works of our nation’s founders lay not in documents and in declarations but in creative, determined action. The building of the new house of Europe has followed the same practical, purposeful course.

John F. Kennedy : (11:09)
Building the Atlantic partnership now will not be easily or cheaply finished. But I will say here and now, on this day of independence, that the United States will be ready for a declaration of interdependence, that we will be prepared to discuss with a United Europe the ways and means of forming a concrete Atlantic partnership. A mutually beneficial partnership between the new union now emerging in Europe and the old American union founded here 175 years ago. All this will not be completed in a year, but let the world know it is our goal.

John F. Kennedy : (12:02)
In urging the adoption of the United States Constitution, Alexander Hamilton told his fellow New Yorkers to think continentally. Today, Americans must learn to think intercontinentally. Acting on our own by ourselves, we cannot establish justice throughout the world, we cannot ensure its domestic tranquility, or provide for its common defense, or promoted to general welfare, or secure the blessings of liberty to ourselves and our posterity. But joined with other free nations, we can do all this and more. We can assist the developing nations to throw off the yolk of poverty. We can balance our worldwide trade and payments at the highest possible level of growth. We can mount a deterrent powerful enough to deter any aggression. And ultimately we can help to achieve a world of law and free choice, banishing the world of war and coercion.

John F. Kennedy : (13:21)
For the Atlantic partnership of which I speak would not look inward only, preoccupied with its own welfare and advancement. It must look outward to cooperate with all nations in meeting their common concern. It would serve as a nucleus for the eventual union of all free man, those who are now free, and those who are vowing that someday they will be free.

John F. Kennedy : (14:00)
On Washington’s birthday in 1861, standing right there, President Elect Abraham Lincoln spoke at this hall on his way to the nation’s capital. And he paid a brief but eloquent tribute to the men who wrote, who fought for, and who died for the Declaration of Independence. It’s essence, he said, was “Its promise not only of liberty to the people of this country but hope to the world. Hope that in due time, the weight should be lifted from the shoulders of all men and that all should have an equal chance.”

John F. Kennedy : (14:46)
On this fourth day of July, 1962, we who are gathered at this same hall, entrusted with the fate and future of our states and nation, declare now our vow to do our part to lift the weights from the shoulders of all, to join other men and nations in preserving both peace and freedom, and to regard any threat to the peace or freedom of one as a threat to the peace and freedom of all. And for the support of this Declaration, with a firm reliance on the protection of divine providence, we mutually pledge to each other our lives, our fortunes, and our sacred order.