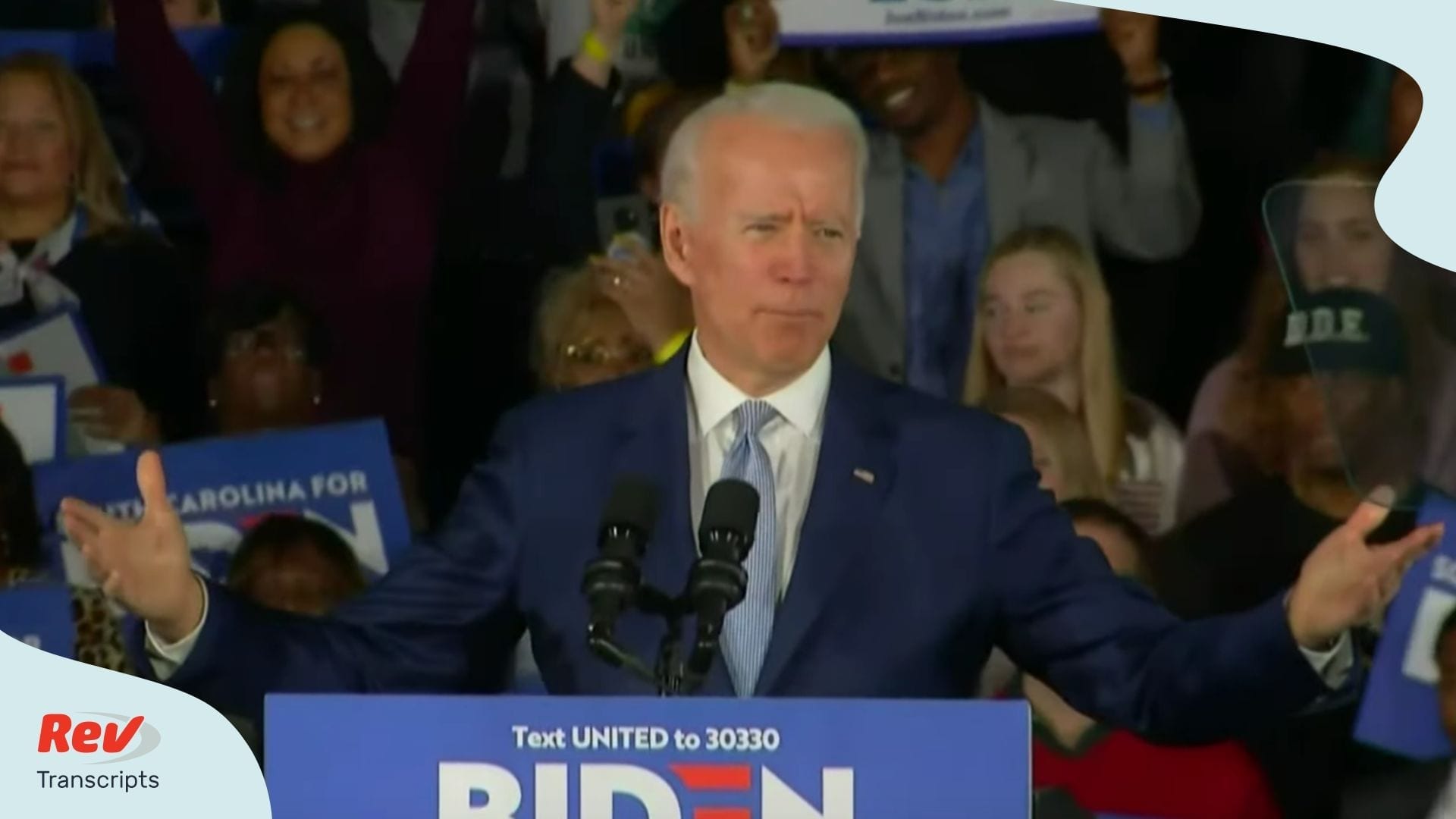 Joe Biden rolled to a decisive victory in the South Carolina Democratic Primary on Saturday night. Read the full transcript of his victory speech.

Joe Biden: (01:19)
It’s a man of enormous integrity. For all those of you who’ve been knocked down. Counted out. Left behind. This is your campaign. Just days ago, the press and the pundits declared this candidacy dead. Now, thanks to all of you, the heart of the Democratic Party, we just won, and we’ve won big because of you. And we are very much alive.

Joe Biden: (02:08)
I told y’all that you can launch a candidacy. You launched Bill Clinton, Barack Obama to the Presidency. Now you launched our campaign on the path to defeating Donald Trump. This campaign has taken off. So join us, go to joebiden.com sign up, volunteer, contribute if you can, but we need you. We want you. And there’s a place for you in this campaign.

Joe Biden: (02:48)
Folks, as we celebrate tonight, here in Columbia, let me talk directly to Democrats across America especially those who will be voting on Super Tuesday. This is the moment to choose the path forward for our party. This is the moment and it’s arrived. Maybe sooner than anyone guessed it would, but it’s here and the decisions Democrats make all across America the next few days will determine what this party stands for, what we believe and what will get done.

Joe Biden: (03:22)
If Democrats nominate me I believe we can beat Donald Trump. Keep Nancy Pelosi in the House of Representatives as Speaker, and take back the United States Senate. So join us. My fellow Democrats across America, join us.

Joe Biden: (03:53)
If Democrats want to nominate someone who will build on Obamacare, not scrap it. Take on the NRA and gun manufacturers not protect them. Stand up and give the poor a fighting chance and the middle class get restored. Not raise their taxes and keep the promises we make, then join us. And if the Democrats want a nominee who’s a Democrat. A life long Democrat. A proud Democrat. An Obama-Biden Democrat. Then join us.

Joe Biden: (04:41)
We have the option of winning big or losing big. That’s the choice. We need to build on the coalition and legacy of the most successful President in our lifetime, Barack Obama. And the way we do this is by bringing Americans together of every race, ethnicity, gender, economic station, Democrats, Republicans, Independents, people of every stripe. Look just like we did here in South Carolina. And like we can do across the entire country on Tuesday and beyond. Folks win big or lose. That’s the choice.

Joe Biden: (05:25)
Most Americans don’t want the promise of revolution. They want more than promises, they want results. They want to give all Americans access to real opportunity. To be able to have affordable healthcare for all Americans. An environment with clean air and clean water and education, and funds our schools. Pays our teachers. Makes community college free. A nation that will stand up to and beat the NRA. Reform our criminal justice system, root out institutional [inaudible 00:06:05], mobilize, mobilize the world against climate change. And an economy that works. Rewards work, not just wealth. My dad used to say, Joe, your job’s about a lot more than the paycheck. It’s about your dignity. It’s about decency, respect. It’s about your place in the community. It’s being able to look your kid in the eye and say, honey, it’s going to be okay. For all our families, for all our communities, because that’s the right thing to do. That’s what makes us Democrats.

Joe Biden: (06:39)
Talk is cheap. False promises are deceptive, and talk about revolution ain’t changing anyone’s life. We need real changes, right now. Something I’ve done my whole career, and I’ll do as President. Well, this isn’t an election to spend all our time in a battle for the soul of the Democratic Party. This is a battle for the soul of the United States of America.

Joe Biden: (07:11)
I won an incredibly perilous moment as all of you know. Winning means uniting America not sewing more division and anger. It means not only fighting but healing the country. We have to beat Donald Trump and the Republican Party, but here’s the deal. We can’t become like them. We can’t become like them. We can’t have a never-ending war. Above all, it’s time for America to get back up. The country is so ready, so ready. Once again, fight for the proposition that we hold these truths to be self-evident. That all men and women are created equal, endowed by the creator with certain inalienable rights. We say it all the time, but we’ve never fully lived up to it. But we’ve never before until this president walked away from it. And it’s the reason why Jim and I and all of us are in this, I believe with every fiber of my being, that all men and women are created equal.

Joe Biden: (08:11)
You know, I saw it a few days ago in a town hall in Charleston, Jim. I spoke with Reverend Anthony Thompson, whose wife Myra was studying the words of her Bible with eight other parishioners in Mother Emanuel, four and a half years ago. It was a weekly routine reading scripture and finding purpose and faith in God and each other. And in an instant hate, vengeance, white supremacy pierced that faith, and they were lost forever. But you know what I found the most remarkable thing in my career thus far. Remark about Reverend Thompson and the families of the Emanuel Nine. It’s through all that pain, all that grief, they forgave. And here’s the deal. In their forgiveness. They brought more change to South Carolina than any that’s occurred over the previous 100 years.

Joe Biden: (09:19)
The Confederate flag came down. We’ll change. That’s why the Sunday after Jill and I and my family, we came back to mother Emanuel on Sunday services after the funeral of the victims because six weeks earlier, we had lost our son Bo, and we needed to be healed too. We need to be healed. I really mean this. We needed whatever they were exuding. And with every season that’s past, they’ve gotten up and found purpose to live life worthy of the ones they lost. Worthy of the blessings to live in this remarkable country. We left here, arrived in overwhelming pain thinking we can do this, we can get through this. So I want to tell you, it’s no small reason why I’m in this race. People like all of you here tonight, all around the country, the days of Donald Trump’s divisiveness will soon be over.

Joe Biden: (10:42)
And as Jim, according to Tocqueville. He was right. This multi-ethnic country we call our democracy America it can’t survive unless we focus on our goodness. We can build a more perfect union because the American people in the last three and a half years have seen the alternative. No, I really mean, think about it. They’ve seen how utterly mean selfish, lack of any sense of empathy or concern for anybody else. A President who not only has horrible policies but the way he mocks and makes fun of other people.

Joe Biden: (11:30)
All of you here in South Carolina, and especially Jim Clyburn my friend, who lifted me in this campaign on his shoulders. And I mean all of you. Many I don’t have time to name all of you. We, Jill and I, our daughter Ashley, my son Hunter has been on the phone straight through for me. My brothers, my sister, my two brothers, my sister, my five grandchildren, my four granddaughters who’ve come out on the campaign trail will never forget what you’ve done for us. Who can say without fear of contradiction, the Bidens love you guys man. The Bidens love you. That’s real.

Joe Biden: (12:31)
And folks now we need to stand behind Jaime Harrison. The next president of the… Next senator of South Carolina. We need to send Joe Cunningham, back to the House of Representatives. All of us. All the Biden’s thank you. Thank you for everything. Everything you’ve done for us. So folks so here’s the deal, let’s get back up. We’re decent, we’re brave, we’re resilient people. We can believe again. We’re better than this [inaudible 00:13:06], we’re better than this present. So get up, take back our country. This is the United States of America. There’s nothing beyond our capacity if we do it together. God bless you all, and may God protect you too. Thank you, thank you, thank you.