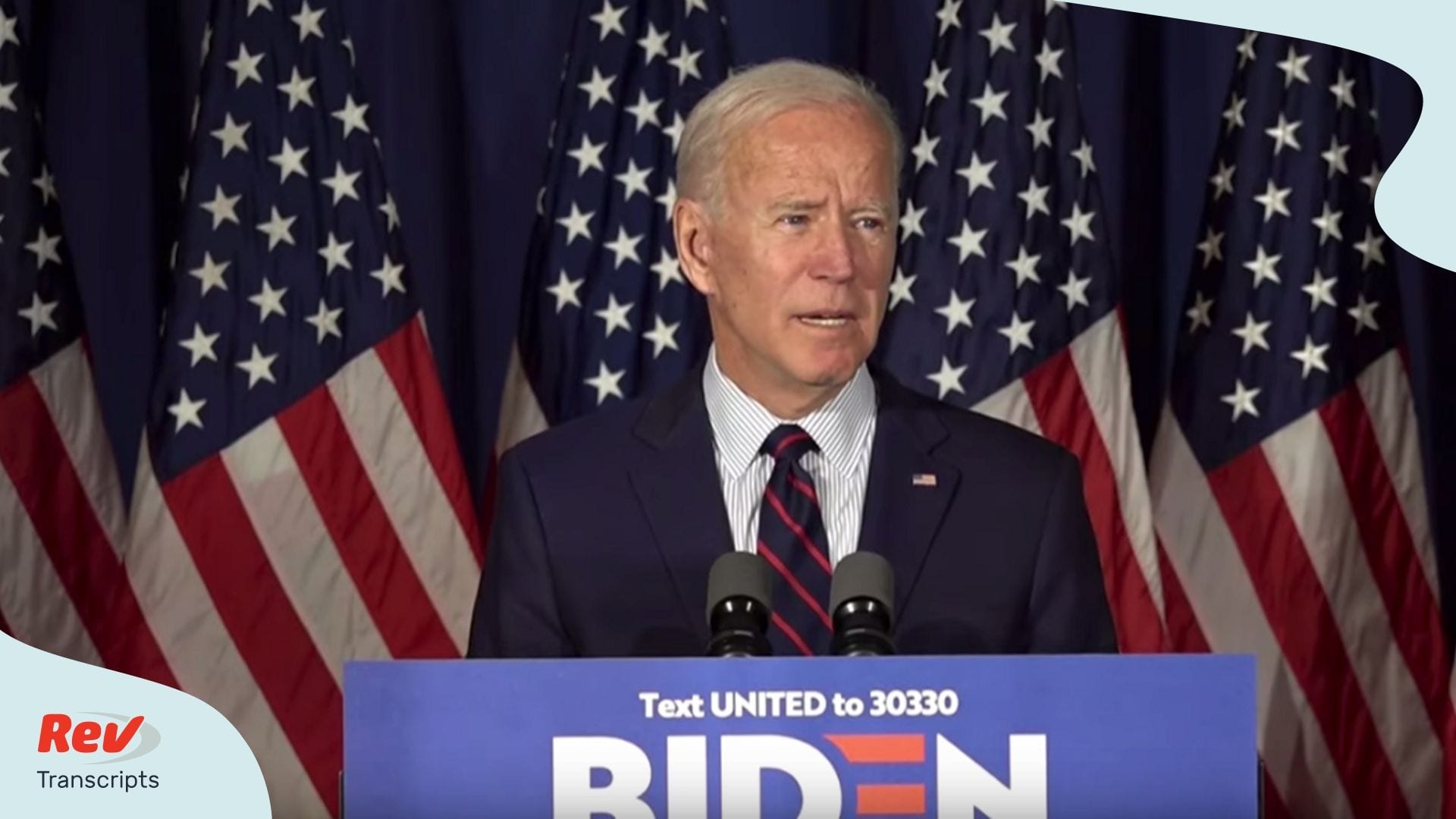 For the first time, Joe Biden called for the impeachment of Donald Trump in a town hall on October 9, 2019. The town hall took place in Rochester, New Hampshire. Biden said a Trump impeachment would ‘preserve our constitution.’ Read the transcript of Biden’s town hall right here on Rev.com.

Joe Biden: (00:00)
… to cobble together a nation capable of self-governance, of meeting threats, both foreign and domestic. They knew, and we forget this sometimes, they knew that the battle for our nation didn’t end at Yorktown. At the time, one of the biggest concerns was that foreign nations would interfere in our democracy, in our experiment. That’s why we have an emoluments clause to prevent presidents from being secretly bribed or paid off by foreign governments.

Joe Biden: (00:34)
In his farewell address, George Washington specifically warned against foreign nations meddling in our affairs. Here’s what he said: “Since history and experience proved that foreign influence is one of the most baneful foes of republican government. We have to be alert.” Over 200 years plus has followed, and we have been consistent in our vigilance to keep foreign nations out of our elections. That was until President Donald Trump.

Joe Biden: (01:13)
Last week on the White House lawn, President Trump invited China to get engaged in deciding our election and who our nominee would be. He did it while standing in front of reporters and cameras, like I am this moment, in the broad light of day. There was a third foreign power that we know of that he’s asked in clear unmistakable language, clear unmistakable language, to interfere on behalf of the democratic procedures in the United States of America. Interfere with them. Quote: “Russia, if you’re listening …”, or quote: “I’d like you to do us a favor though,” end of quote, to the President of Ukraine. Quote: “China should start an investigation,” end of quote. It’s wrong. It’s the very thing Washington warned about, and undermines our electoral process. It’s un-American.

Joe Biden: (02:22)
Go in any city or town in this nation or your state, going to any schoolhouse, go into any town hall, any VFW Post, any football or baseball game, and ask the question: Is it okay for a foreign nation to meddle in our elections, to spread lies about opponents specifically at the direct invitation of a sitting president? The answer is obviously no. As Americans, it offends every bone in our body. The ballot box is sacred ground in America. That’s where we make our voices heard. That’s where we decide who leads us. That’s where we chart America’s future. It’s where we fulfill our duty as citizens. It’s not complicated. It’s called democracy. We believe Americans should decide American elections period. But Donald Trump will do anything to get reelected, including violating the most basic forms of democracy. It’s stunning and it’s dangerous because it directly threatens our democracy.

Joe Biden: (03:39)
This is not hyperbole. It’s a fact. No president in American history has ever dared to engage in such unimaginable behavior. With his words and his actions, President Trump has indicted himself by obstructing justice, refusing to comply with the congressional inquiry. He’s already convicted himself. In full view of the world and the American people, Donald Trump has violated his oath of office, betrayed this nation, and committed impeachable acts.

Joe Biden: (04:32)
To preserve our constitution, our democracy, our basic integrity, he should be impeached. That’s not only because of what he’s done. To answer whether he has committed acts of sufficient to warrant impeachment is obvious. We see it in Trump’s own words. We see it in the texts from State Department officials that have been made public. We see it in his playing much of the United States government into his corrupt schemes, individuals within the government, his appointees. But we have to remember that impeachment isn’t only about what the president’s done, it’s about the threat the president poses to the nation if allowed to remain in office.

Joe Biden: (05:24)
One thing about this president is absolutely clear, and I don’t think anyone can contradict this, he has seen no limits to his power regardless of what the Constitution says. He believes the entire United States government can be corrupted into furthering his personal political needs. He’s even willing to hold Congress and congressionally appropriated aid to a foreign nation hostage to his personal political demands. He believes if he does something, it’s legal, period. And perhaps most importantly, he believes there is nothing we can do about it. He believes he can and will get away with anything he does. We all laughed when he said he could stand in the middle of Fifth Avenue and shoot someone and get away with it. It’s no joke. He’s shooting holes in the Constitution, and we cannot let him get away with it.

Joe Biden: (06:40)
Folks, we should have no illusions. We should have no illusions. This is a president who has decided that this nation doesn’t have the tools or the power or the political will to stop him from doing whatever he wants. Trump isn’t just testing us, he’s laughing at us. He has no sense of decency. He doesn’t care about the law. He doesn’t believe that people and nations that follow the rules are anything other than suckers or fools or losers. We have to prove him wrong. We have to demonstrate that our constitution, our government, our elected officials, including Republicans, are up to this moment.

Joe Biden: (07:36)
This is an especially dangerous moment for this nation because we know the pressure on Trump’s only going to increase. When that pressure increases, he’s only going to grow more volatile, more erratic, more self-serving and more destructive. He has another year in office.

Joe Biden: (07:59)
He’ll stop at nothing to save himself. No individual, no institution, nothing. Nothing that we’ve held sacred in this nation more than 200 years will be safe. If Donald Trump was just a reality TV star, it wouldn’t matter, but he’s responsible for the largest economy in the world. He’s commander in chief of the most powerful military in the history of the world, and he’s supposed to be a leader of the free world. Yet with the free world under threat of advancing authoritarianism, Donald Trump has completely abdicated America’s global leadership and embraced those autocrats.

Joe Biden: (08:39)
AT a time when China is engaged in human rights abuses that are staggering cause for enormous concern, more than 100 Uyghur Muslims are imprisoned in so-called “reeducation camps” in the West. In Hong Kong, protesters are increasingly being met with violent repression as they demand the democratic rights they were promised, they were guaranteed by us and the rest of the world. Does he speak out for human rights and stand for the people in Hong Kong, or the Uyghurs who are in reeducation camps? No. In fact, he promises to stay silent.

Joe Biden: (09:26)
Trump and his emissaries have sought repeatedly to extort the existential fears of Ukrainian leaders for political advantage, holding up political support of vitally needed military aid to pressure Ukraine at a time when it’s engaged in a live war with Russia. Most people don’t realize in the Donbass, in the West, there’s a war going on now, a war that’s costing thousands of Ukrainian lives. This isn’t a game. It’s deadly serious.

Joe Biden: (10:01)
The United States cannot afford to have a president who will abuse whatever power is available to him to get reelected, that’s what it’s all about. Here’s the kicker, the people around the president knew that what he was doing was wrong, profoundly wrong. So what they tried to do? They tried to cover it up by hiding the evidence, classifying it like no other president attempt to classify these conversations. We only know about this thanks to the courageous actions of a whistleblower who has since been joined by others stepping up to protect our country. Trump’s scheme has been exposed.

Joe Biden: (11:00)
He’s afraid about just how badly I will beat him next November.

Joe Biden: (11:27)
Folks, he’s targeted me and my family with lies and distortions and smears. That’s all they are, because he thinks he will undermine my candidacy for the nomination as well as the presidency if I’m the nominee. He’s just flat doing what he’s always done, lying, even though the mainstream has called him out for his lies. Do you ever recall a reporter, a mainstream reporter, while a president is speaking, interrupting and saying, “He’s lying?” Maybe. I don’t remember.

Joe Biden: (12:05)
He’s spending tens of millions of dollars this early in the campaign to engage in the democratic primary to spread lies. He’s trying to orchestrate a campaign where truth and the facts are irrelevant. In Goebbels-ist terms, you say it long enough, often enough, people may believe it. And his lying is matched only by his manifest incompetence, this president.

Joe Biden: (12:37)
I believed it at the outset of my announcing that there would be no level to which he will not stoop. He’s insinuated that people who spoke to the whistleblower should be executed. Here’s what Trump said in a closed-door meeting with U.S. diplomats, quote: “I want to know who’s the person, who’s the person who gave the whistleblower the information because that’s close to a spy.” I’m still quoting, “You know what we used to do in the old days when we were smart, right?” I’m still quoting, “Right? Spies and treason, we used to handle it a little differently than we do now.”

Joe Biden: (14:06)
Trump even dared to say that if he was removed from office quote … I shouldn’t say quote, I’m not positive of the quote. I’ll be very precise, that it will spark a civil war.

Joe Biden: (14:29)
Right-wing media outlets are full of baseless conspiracy theories and the darkest reaches of the internet are awash with those vile attacks, and he’s spending millions of dollars right now, right now, of campaign money from his special interest groups who hate me and most Democrats to spread his lies. that’s what they are, they’re lies. There’s no truth in his charges and attacks against me and my son. Zero.

Joe Biden: (15:03)
Every independent news organization that’s reviewed his charges at length found them to be flat-out lies, and Trump knows it. But old method he has used very well since he was a businessman: Repeat, repeat, repeat the lie.

Joe Biden: (15:23)
My insistence that a prosecutor who was viewed as corrupt be replaced was the official position of the President of the United States, the United States government, supported by Republican Senators who sent a letter in 2016 calling for the removal of Shokin because of corruption, supported by the European Union, the International Monetary Fund, our allies, including the UK, France, Germany.