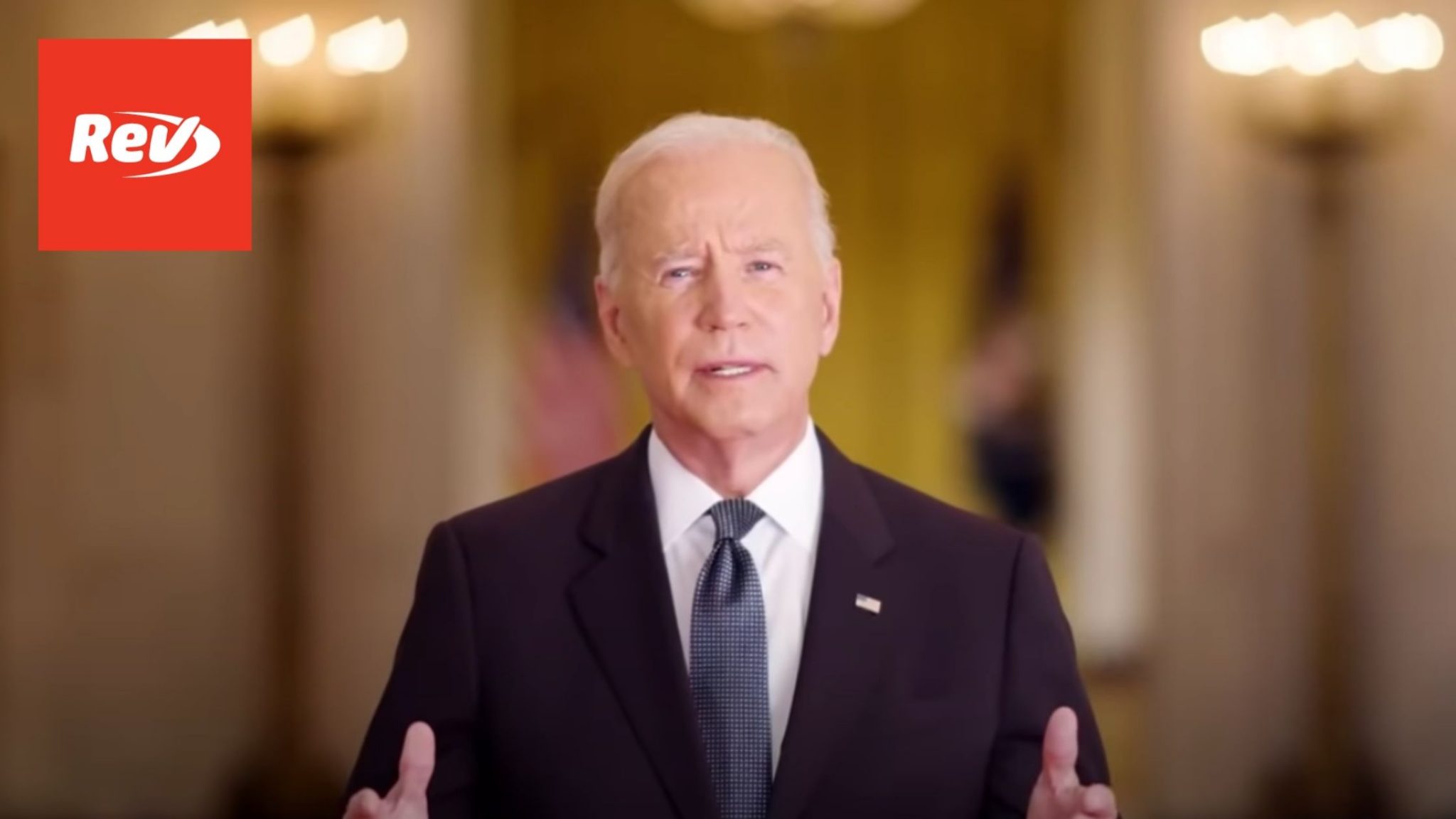 President Joe Biden’s speech on the 20th anniversary of the September 11 attacks. Read the transcript of his speech remarks here.

Joe Biden: (00:00)
On this 9/11, like every 9/11, I’m thinking about my friend Davis, who I grew up with in Delaware. On this day 20 years ago, he and his family had just passed the first year without their youngest of three sons, Teddy, who died in a boating accident at age 15. And his eldest son, Davis Jr., was just six days into the new job, on the 104th floor of the South Tower, the World Trade Center. Davis went straight to ground zero to search for his son. They searched deep into the last inning of hope, as he put it. A few days later, I spoke with Davis, and talked as fathers who know. I was on my way to speak to the students at the University of Delaware about what to make of the new world we were in. He told me to tell people, quote, “Don’t be afraid.” He said, tell them, “Don’t be afraid.”

Joe Biden: (01:02)
The absolute courage it took after two unimaginable losses is extraordinary, yet the most ordinary of American things. To know life can be unfair and uncertain, a cruel twist of accident or deliberate act of evil. But, even in darkness to still be the light. To the families of the 2,977 people from more than 90 nations killed on September 11th, 2001 in New York city, Arlington, Virginia, and Shanksville, Pennsylvania, and the thousand more who were injured, America and the world commemorate you and your loved ones, the pieces of your soul. We honor all those who risked and gave their lives in the minutes, hours, months, and years afterwards. The firefighters, police officers, EMTs and construction workers and doctors and nurses, faith leaders, service members, veterans, and all of the everyday people who gave their all to rescue, recover and rebuild.

Joe Biden: (02:14)
But, it’s so hard whether it’s the first year or the 20th. Some of them have grown up without parents, and parents have suffered without children. Husbands and wives have had to find ways forward without their partners in their life with them. Brothers and sisters, uncles and aunts, loved ones and friends that have had to celebrate birthdays and milestones with a hole in their heart. No matter how much time has passed, and these commemorations bring everything painfully back, as if you just got the news, a few seconds ago. And so on this day, Jill and I hold you close in our hearts and send you our love.

Joe Biden: (02:57)
For people around the world that you’ll never know who are suffering through their own losses who see you, your courage, your courage gives them courage that they, too, can get up and keep going. We hope that 20 years later, the memory of your beloved brings a smile to your lips, even while still bringing a tear to your eye. The days that’s followed September 11th, 2001, we saw heroism everywhere, in places expected and unexpected. We also saw something all too rare, a true sense of national unity. Unity and resilience, the capacity to recover and repair in the face of trauma. Unity and service, the 9/11 generation is stepping up to serve and protect the face of terror, to get those terrorists who were responsible, to show everyone seeking to do harm to America, that we will hunt you down, and we will make you pay.

Joe Biden: (03:58)
That will never stop, today, tomorrow, ever, from protecting America. Yet, we also witnessed the darker forces of human nature: fear and anger, resentment and violence against Muslim Americans, true and faithful followers of a peaceful religion. We saw a national unity bend. We learned that unity is the one thing that must never break. Unity is what makes us who we are, America at its best. To me, that’s the central lesson of September 11th. It’s that at our most vulnerable in the push and pull of all that makes us human and the battle for the soul of America, unity is our greatest strength.

Joe Biden: (04:44)
Unity doesn’t mean we have to believe the same thing. We must have a fundamental respect and faith in each other and in this nation. We are unique in the history of the world because we’re the only nation based on an idea, an idea that everyone is created equal and should be treated equally throughout their lives. That is the task before us, to once again, lead not just by the example of our power, but by the power of our example, and I know we can. For I know hope is not simply an expectation. Hope is a conviction. Hope allows us to act with courage, to act and honor those we lost 20 years ago and those who have given their whole souls to the cause of this nation every day since. To act and build a future, not a reactionary one or one based on fear, but a future of promise, strength, and grace worthy of their dreams and sacrifice. And to act and keep the faith that while life is fragile, it is truly something wonderful.

Joe Biden: (05:54)
We find strength in its broken places, as Hemingway wrote. We find light in the darkness. We find purpose to repair, renew, and rebuild. And as my friend told me that September 20 years ago, we must not be afraid. May God bless you all. May God bless the lives lost on September 11th, 2001 and their loved ones that were left behind. May God protect our troops.