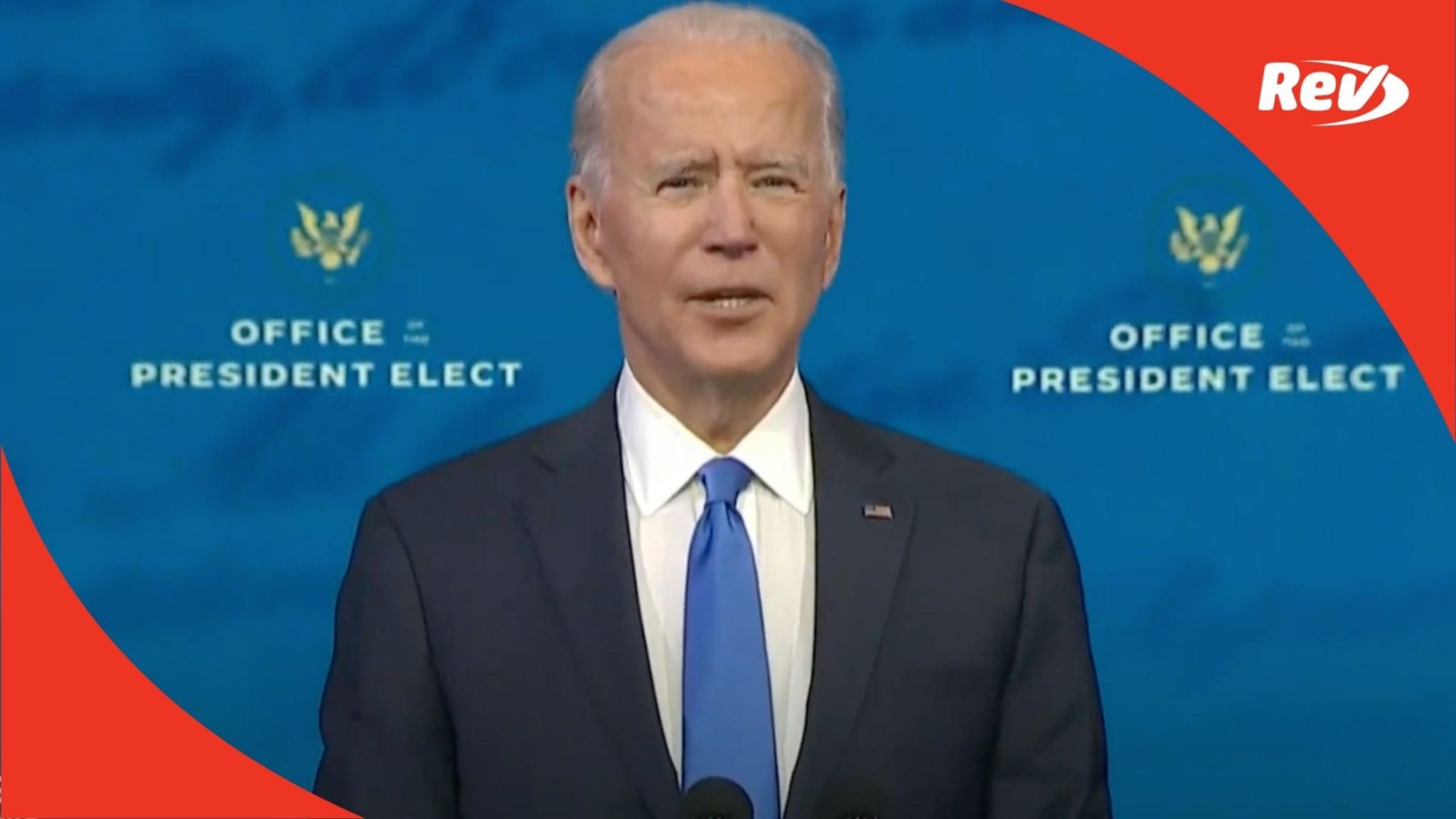 Joe Biden gave a speech after the electoral college vote certification on December 14. Read the transcript of his remarks here.

Joe Biden : (02:48)
Good evening, my fellow Americans. Over the past few weeks, officials in each state, commonwealth, and district, without regard to party or political preference have certified their winning candidate. Today, the members of the Electoral College representing the certified winner, cast their votes for President and Vice President of the United States in an act just as old as our nation itself. And once again in America, the rule of law, our Constitution and the will of the people prevailed. Our democracy pushed, tested, threatened, proved to be resilient, true and strong. The Electoral College votes which occurred today effect the fact that even in the face of a public health crisis unlike anything we’ve experienced in our lifetime, the people voted. They voted in record numbers. More Americans voted this year than have ever voted in the history of the United States of America. Over 155 million Americans were determined to have their voices heard and their votes counted. In the start of this pandemic, this crisis, many were wondering how many Americans would actually vote at all. But those fears proved to be unfounded. We saw something very few predicted, even thought possible, the biggest voter turnout in the history of the United States of America, a number so big that this election now ranks as the clearest demonstration of the true will of the American people, one of the most amazing demonstrations of civic duty we’ve ever seen in our country.

Joe Biden : (04:09)
It should be celebrated, not attacked. More than 81 million of those votes were casts for me and Vice President-elect Harris. That too is a record. More than any ticket has received in the history of America. It represents a winning margin of more than seven million votes over the number of votes cast for my opponent. Together, the Vice President-elect Harris and I earned 306 electoral votes, well exceeding the 270 electoral votes needed to secure victory. 306 electoral votes is the same number of electoral votes that Donald Trump and Vice President Pence received when they won in 2016, excuse me. At the time, President Trump calls the Electoral College tally a landslide. By his own standards. These numbers represented a clear victory then, and I respectfully suggest they do so now. If anyone didn’t know before, they know now. What beats deep in the hearts of the American people is this, democracy, the right to be heard, to have your vote counted, to choose leaders of this nation, to govern ourselves.

Joe Biden : (05:27)
In America, politicians don’t take power, people grant power to them. The flame of democracy was lit in this nation a long time ago. And we now know nothing, not even a pandemic or an abuse of power can extinguish that flame. And as the people kept it a flame, so too did courageous state and local officials, and election workers. American democracy works because America makes it work at a local level. One of the extraordinary things we saw this year was that every day Americans, our friends and our neighbors, often volunteers, Democrats, Republicans, Independents, demonstrating absolute courage, they showed a deep and unwavering faith in and a commitment to the law. They did their duty in the face of the pandemic. And then they could not and would not give credence to what they knew was not true. They knew this election was overseen, was overseen by them. It was honest, it was free and it was fair.

Joe Biden : (06:39)
They saw it with their own eyes and they wouldn’t be bullied into saying anything different. It was truly remarkable because so many of these patriotic Americans are subject to so much, enormous political pressure, verbal abuse, and even threats of physical violence. While we all wish that our fellow Americans in these positions will always show such courage and commitment to free and fair elections, it is my sincere hope we never again see anyone subjected to the kind of threats and abuse we saw in this election. It’s simply unconscionable. We owe these public servants a debt of gratitude. They didn’t seek the spotlight, and our democracy survived because of them, which is proof once more that it’s everyday America and infused with honor, character and decency that is the heart of this nation.

Joe Biden : (07:38)
You know, in this election, their integrity was matched by their strength, independence, and the integrity of our judicial system. In America, when questions are raised about the legitimacy of any election, those questions are resolved through the legal processes. And that’s precisely what happened here. The Trump campaign brought dozens and dozens and dozens of legal challenges to test the result. They were heard again and again, and each of the time they were heard, they were found to be without merit. Time and again, President Trump’s lawyers presented arguments to state officials, state legislatures, state and federal courts, and ultimately to the United States Supreme Court twice. They were heard by more than 80 judges across this country. And in every case, no cause or evidence was found to reverse or question or dispute the results.

Joe Biden : (08:37)
A few states went for recounts. All the counts were confirmed. The results in Georgia were counted three times. It didn’t change the outcome. The recount conducted Wisconsin actually saw our margin grow. The margin we had in Michigan was 14 times the margin President Trump won that state by four years ago. Our margin in Pennsylvania was nearly twice the size of the Trump margin four years ago. And yet none of this has stopped baseless claims about the legitimacy of the results.

Joe Biden : (09:12)
Even more stunning, 17 Republican Attorneys General, and 126 Republican members of the Congress, actually, they actually signed onto a lawsuit filed by the state of Texas. That lawsuit asked the United States Supreme Court to reject the certified vote counts in Georgia, Michigan, Pennsylvania, and Wisconsin. This legal maneuver was an effort by elected officials and one group of states to try to get the Supreme Court to wipe out the votes of more than 20 million Americans in other states. And to hand the presidency to a candidate who lost the Electoral College, lost the popular vote, and lost each and every one of the states whose votes they were trying to reverse.

Joe Biden : (10:04)
It’s a position so extreme, we’ve never seen it before. And position that refused to respect the will of the people, refused to respect the rule of law, and refused to honor our Constitution. Thankfully, a unanimous Supreme Court immediately and completely rejected this effort. The Court sent a clear signal to President Trump that they would be no part of an unprecedented assault on our democracy. Every single avenue was made available to President Trump to contest the results. He took full advantage of each and every one of those avenues. President Trump was denied no course of action he wanted to take. He took his case to Republican governors and Republican Secretary of State as he criticized many of them, to Republican state legislature, to Republican appointed judges at every level. And then the case decided after the Supreme Court’s latest rejection, a judge appointed by President Trump wrote, “This court has allowed the plaintiff the chance to make his case and he has lost on the merits.” Lost on the merits.

Joe Biden : (11:40)
You know, respecting the will of the people is at the heart of our democracy, even we find those results hard to accept. But that’s the obligation of those who’ve taken on a sworn duty to uphold the Constitution. Four years ago, when I was a sitting Vice President of the United States, it was my responsibility to announce the tally of the Electoral College votes of the joint session of Congress, had voted to elect Donald Trump. I did my job. And I’m pleased but not surprised by the number of my former Republican colleagues in the Senate who have acknowledged already the results of the Electoral College. I thank them. And I’m convinced we can work together for the good of the nation on many subjects. That’s the duty owed to the people, to our Constitution, to our history.

Joe Biden : (12:32)
You know, in this battle for the soul of America, democracy prevailed. We the people voted, faith in our institutions held, the integrity of our elections remains intact. And now it’s time to turn the page as we’ve done throughout our history, to unite, to heal. As I said in this campaign, I will be president for all Americans. I’ll work just as hard for those of who you didn’t vote for me as I will for those who did. There’s urgent work in front of us. Getting this pandemic under control and getting the nation vaccinated against this virus, delivering immediate economic help so badly needed by so many Americans who are hurting today, and then building our economy back better than it ever was.

Joe Biden : (13:23)
In doing so, we need to work together to give each other a chance to lower the temperature. And most of all, we need to stand in solidarity as fellow Americans, to see each other, our pain, our struggles, our hopes, and our dreams. We’re a great nation. We’re good people. We may come from different places, hold different beliefs, but we share in common a love for this country, a belief in its limitless possibilities. For we, the United States of America, has always set the example for the world for a peaceful transition of power. We’ll do so again. I know the task before us won’t be easy. It’s tempered by the pain so many of us are feeling.

Joe Biden : (14:15)
Today, our nation passed a grim milestone, 300,000 deaths to this COVID virus. My heart goes out to each of you in this dark winter of the pandemic, about to spend the holidays and the new year with a black hole in your hearts, without the ones you loved at your side. My heart goes out to all of you who have fallen on hard times through no fault of your own, unable to sleep at night, staring at the ceiling, weighed down by the worry of what tomorrow will bring for you and equally important for your family.

Joe Biden : (14:56)
But we faced difficult times before in our history. I know we’ll get through this one, but together. That’s how we get through it together. So as we start the hard work to be done, may this moment give us a strength to rebuild this house of ours upon a rock that can never be washed away. As in the Prayer of St. Francis, for where there is discord, union, where there is doubt, faith where there is darkness, light. This is who we are as a nation. This is the America we love and that is the America we’re going to be. So thank you all and may God bless you. And may God protect our troops and all of those who stand watch over our democracy. Thank you.

Joe Biden : (15:46)
Thanks for the congratulations, appreciate it.