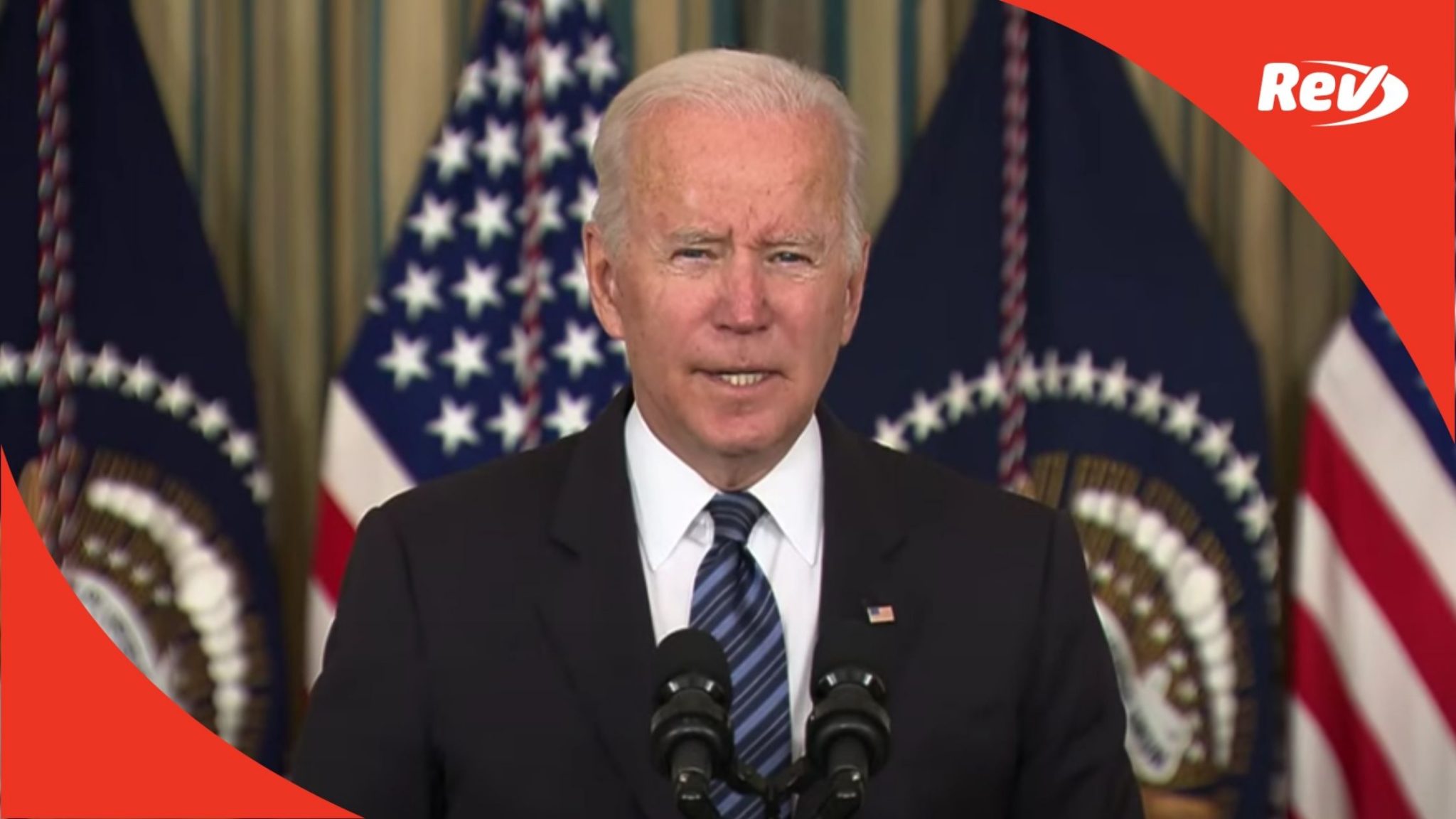 President Joe Biden spoke about the October jobs report on November 5, 2021. The economy had a strong rebound with the addition of 531,000 jobs last month. Read the transcript of the speech briefing here.

President Biden: (00:00)
… in this historically strong recovery, unemployment rate has fallen again today, down to 4.6%. This included a substantial drop in unemployment for Hispanics, which was much needed. Our economy is on the move. This morning, we learned that in October, our economy created 531,000 jobs, well above expectations. We also learned that job growth over the prior two months, August and September, was nearly 250,000 more jobs than previously thought.

President Biden: (00:35)
In total, the job creation in the first full nine months of my administration is about 5.6 million new jobs, a record for any new president. That’s a monthly average of over 60,000 new jobs each month, 10 times more than the job creation at three months before I took office. New unemployment claims have fallen every week for the past five weeks, are down by more than 60% since I took office and are now at the lowest level since the pandemic started. And people continue to move from unemployment rolls to work. Unemployment has decreased this year by more than any other year since 1950.

President Biden: (01:17)
So any year since 1950, unemployment has decreased more, in this year, than since 1950. And not only are more Americans working, working Americans are seeing their paychecks go up. Weekly pay went up in October with an average hourly earnings up almost 5% this year, that’s more in some of the lowest paid workers in our country, men and women, who work in restaurants, hotels, the entertainments have seen their pay go up 12% this year. Over five and a half million jobs, unemployment down a record pace to 4.6% and before we passed the Rescue Plan, forecasters said it would take to the end of 2023, to get to 4.6 unemployment rate. Today we’ve reached that rate two years before forecasters thought it was possible. I would humbly suggest this is a significant improvement from when I took office and a sign that we’re on the right track.

President Biden: (02:21)
This did not happen by accident, or just because. We laid the foundation for this recovery with my American Rescue Plan that Congress passed at beginning my term, it put money in working families’ pockets. It gave families with kids a tax cut each month. It helped keep small businesses going in the dark days earlier this year. And it provided the resources needed launch one of the fastest mass vaccination programs ever. We got more than 220 million shots in arms in my first 100 days. And we didn’t stop there. In recent months, we’ve started implementing vaccination requirements, which have helped bring the number of unvaccinated adults down in this country from around 100 million several months ago, to 60 million now. That’s good for our health, but it’s also good for our economy. Now, vaccinated workers are going back to work. Vaccinated shoppers are going back to stores. And with the launch of the vaccines for kids ages five through 11 this week, we can make sure more vaccinated children can stay in school.

President Biden: (03:28)
Through these plans of economic success, the economic rescue and vaccination plans, both of them, have made the economy the envy of the world. We’re the fastest growing major economy, and one creating jobs at a faster pace than anyone. Yet, yes there’s a lot more to be done. We still have to tackle the cost that American families are facing, but this recovery is faster, stronger, and fair and wider than almost anyone to predicted. That’s what the numbers say, but we want to make sure that people continue to feel it in their lives, in their bank accounts, in their hopes and expectations, for a tomorrow that’s better than today. That’s what it’s all about. Making sure our recovery is fully felt to determine that depends on two things, two things that are entirely within our reach.

President Biden: (04:24)
The first, for our economy to fully recover, we need to keep driving vaccinations up and COVID down. In that effort, we took two major steps this week. On Tuesday, the CDC recommended COVID-19 vaccine for children between the age of five and 11. Were prepared for this moment by securing an enough vaccine supply for every single child in that age category in America. Those doses have started to arrive at thousands of pediatricians’ offices, pharmacies, schools, and other sites. As a parent of one of the first children who received the shot said, “Today is such a huge sigh of relief.” Starting next week, our kids’ vaccination programs will hit full strength, with about 20,000 trusted and convenient places for parents to get their kids vaccinated. And yesterday, the Occupational Safety and Health Administration, OSHA, issued a rule to require employers with 100 or more employees to ensure that each of their workers is fully vaccinated or tests negative for COVID-19, at least once a week.

President Biden: (05:36)
And the Centers for Medicare and Medicaid Services issued a rule requiring that all workers at healthcare facilities participating in Medicare and Medicaid are fully vaccinated. Together these rules along with other requirements we’ve put in place means that two thirds of all workers in the United States are now covered by vaccination requirements. These requirements have broad public support and they work. Already, we’ve seen organizations that have adopted vaccination requirements increase their vaccination rates by more than 20 percentage points, often as high as over 90%. This is good for the workers, for their colleagues, for their loved ones and for their communities, and it’s also good for the economy. In a recent University of Chicago survey, every economist agreed that requiring staff vaccinations or regular testing among large employers would promote the economic recovery that is faster and stronger even than it is now. Analysts of Goldman Sachs project that these kinds of requirements could lead to up to five million more Americans reentering the workforce, that’s because they feel safer to do so.

President Biden: (06:50)
It’s because there are fewer disruptions to things like childcare. Again, beating COVID-19 remains one of the most important ways to strengthen our economy, not just save lives, but strengthen our economy, and we’re making progress. As of this week, 70% of American adults are fully vaccinated, more than 193 million Americans fully vaccinated, it was less than 1% when we took office 10 months ago. And one more piece of good news. Last night, we received promising news about another potent and potential COVID treatment, a pill. A pill developed by Pfizer that may dramatically reduce the risk of being hospitalized or dying when taken shortly after infection, if you’re infected. If authorized by the FDA, we may soon have pills that may treat the virus of those who become infected. We have already secured millions of doses and the therapy would be another tool in our toolbox to protect people from the worst outcomes of COVID.

President Biden: (07:58)
But look, it’s important to remember: we need to prevent infections, not wait to treat them once they happen, and vaccination remains the best way to do that. The pandemic is not yet behind us, but within this week’s announcements, vaccines for kids, more adults getting vaccinated, potential treatment for those who get sick, we’re accelerating our path out of this pandemic. The second way to make sure recovery is fully felt is to pass my bipartisan infrastructure agreement and my Build Back Better plan, which are being debated now. And I’m going to be heading over there shortly after I do this press conference, back to my office to make some calls. I want to say very clearly, if your number one issue is the cost of living, the number one priority should be seeing Congress pass these bills. 17 Nobel prize winners in economics have spontaneously wrote to me together and said this will lower inflationary pressure on the economy when we pass my bills.

President Biden: (09:01)
A new analysis from the wall street firm of Moody’s Analytics found that it will ease the financial burden of inflation for middle class families. Put another way, these bills will provide families with, as my dad used to say, just a little more breathing room. That’s because the Build Back Better framework lowers your bills for healthcare, childcare, prescription drugs, and preschool, and families get a tax cut. That’s how you end some of the anxiety people are feeling about the economy. That’s how we give people some breathing room. That’s in addition to the infrastructure bill that will create millions of jobs rebuilding the arteries of our economy. And by the way, these two bills add up to the largest effort to combat climate change in the history of the United States of America. Right now, we stand in the cusp of historic economic progress.

President Biden: (09:58)
It’s two bills that together will create millions of jobs, grow the economy, invest in our nation and our people, lower costs for families and turn climate crisis in an opportunity and put us in a path not only to compete, but to win the economic competition for the 21st century against all comers. In passing these bills, we’ll say clearly to the American people, “We hear your voices. We’re going to invest in your hopes, help you secure a brighter future for yourself and for your families and make sure that America wins the future in the process.”

President Biden: (10:33)
I’m asking every member of the House of Representatives to vote yes on both these bills right now. Send the infrastructure bill to my desk, send the Build Back Better bill to the Senate. Let’s build an incredible economic progress, build on what we’ve already done, because this will be such a boost when it occurs. Let’s show the world that America’s democracy can deliver and propel our economy forward. Let’s get this done. I’ll be back to answer some of your questions when they pass, but may God bless you all. And may God protect our troops. Thank you.